The holiday week’s action was pretty cut and dried after Monday’s session as the bulls fumbled their immediate upside continuation setup and the opposing side launched a counterattack by repeating the recent Monday sell-off tradition.

If you recall, during the Monday regular trading hours, the bears managed to break under the key 2708 level on the S&P 500 derived from the Friday Nov 16 low that opened up the can of worms and then it threatened to break the inside week range for the rest of the week. Essentially, we had 3 major support levels going into the week at 2680/2650/2603 and two of them were fulfilled as the STFR (short the f'in rally) dominated the week. We also had to treat every bounce as a dead-cat when below the trending resistances as discussed.

The main takeaway from this bear-trend week was that the bears managed to close at the lows of the week and are trying their best to do a breakdown setup below the October 2603 low. Price action is now stuck between the 2650 and 2603 majors heading into the November month-end week along with the news-driven G20 timing catalyst excuses -- so traders need to be aware of being focused on quick opportunities getting in and out during this type of environment.

Friday closed at 2628.5 around the day’s low, making it a bear trend week with a range between  2748 and 2626. Currently, we’re looking for some sort of a bigger dead-cat or relief bounce developing back towards around 2680-2700 as the market is against the October major support zone and not letting go so easily on first retest basis of a higher lows/double bottom. (First things first, we need to hit those levels before we could even start to talk about it becoming a sustainable bounce and not just a dead-cat/relief.)

As of writing, price action is stuck around 2640 and between the 2650/2603 major levels as it makes up its mind in this overall horizontal range of the past couple days. The immediate trending resistance remains the same at 2670 just like the past couple sessions. This means that the current highest probability portion of a dead-cat bounce would be to 2670 first for those trading this current setup aggressively.

Our game plan going into this week for our ES trading room is fairly simple:  We're only looking for quick train rides getting in and out at our intraday key levels within the context that it’s likely going to turn into a dead-cat or relief bounce week when above 2603.

Obviously, if price invalidates by breaking the October lows, then we need to continue to utilize the STFR strategy in order to take advantage of the momentum. After all, it’s a month-end week with potentially lots of news driven BS from the G20, so we don’t want to overstay our welcome.  We think it would be just easier to just take quick opportunities rather than get trapped in the overall inside week ranges.

Below the 2603 monthly low opens back up this year’s prior lows at 2552 and 2529.  These are levels to be prepared with in case things go very wrong for bulls vs. the cascading bear trending environment.

For reference, Nasdaq (technology) is the weakest looking index right now and probably is the biggest concern for the big players out there if it doesn’t stabilize enough versus this major monthly trending support zone that it has been holding against since October. Scanning through our beloved mega-cap stocks, traders really do not want to see a cascading sell-off effect as it’s a top heavy market with only the leaders going out and enhancing a cascading effect.

Concise KISS (Keep It Simple, Stupid) version with raw numbers:  Treat 4-hour white line projection as the general roadmap when above 2603, likely a relief bounce to 2680-2700 with 2670 the immediate trending resistance to be aware of. Below 2603, it would open up the market to be really flushy immediately towards this year’s prior lows at 2552/2529. Likely a news-driven week with the G20 shenanigans colliding with the November month-end important closing print, so traders should really focus on quick opportunities only: get in and get out. 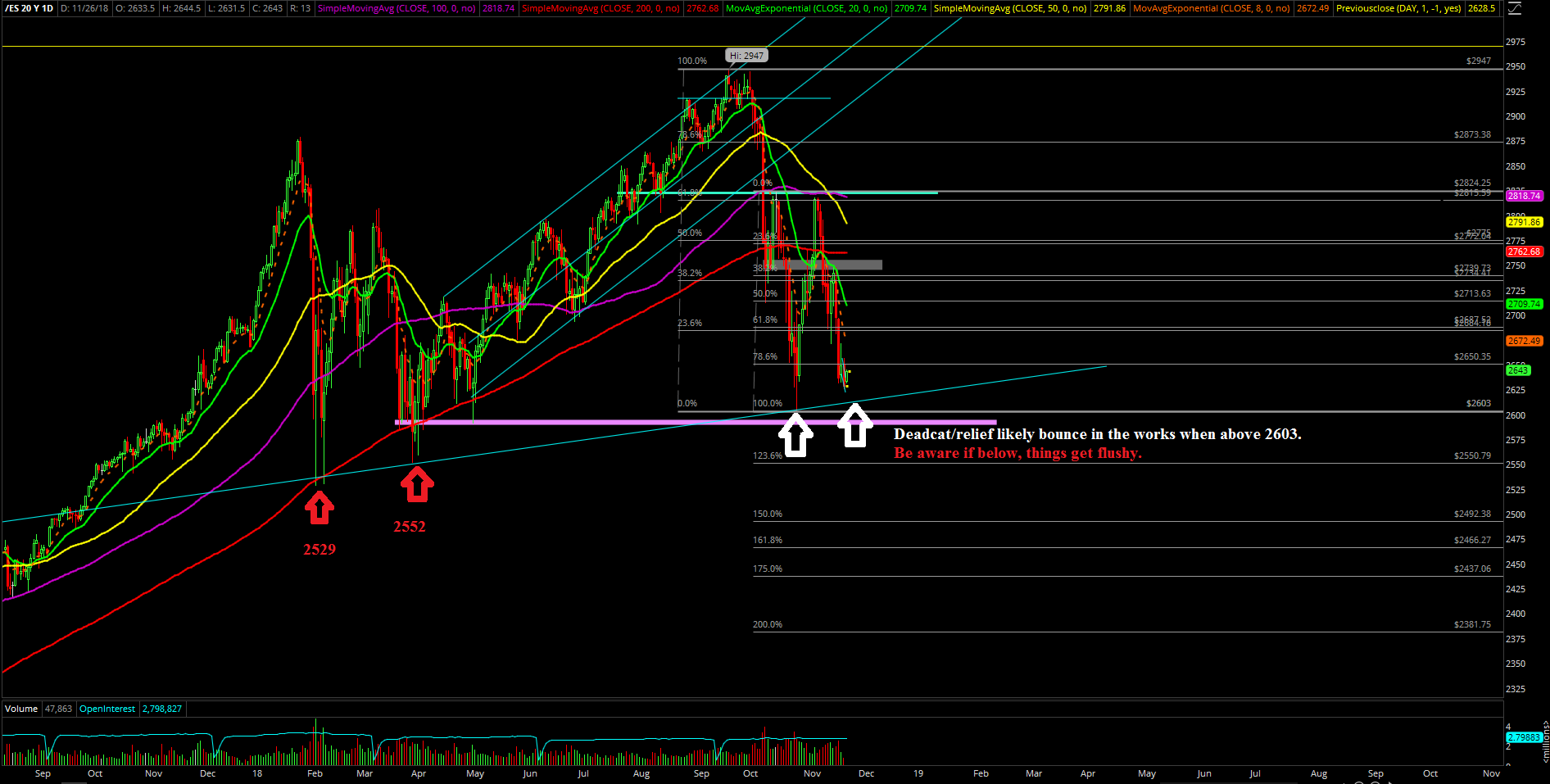 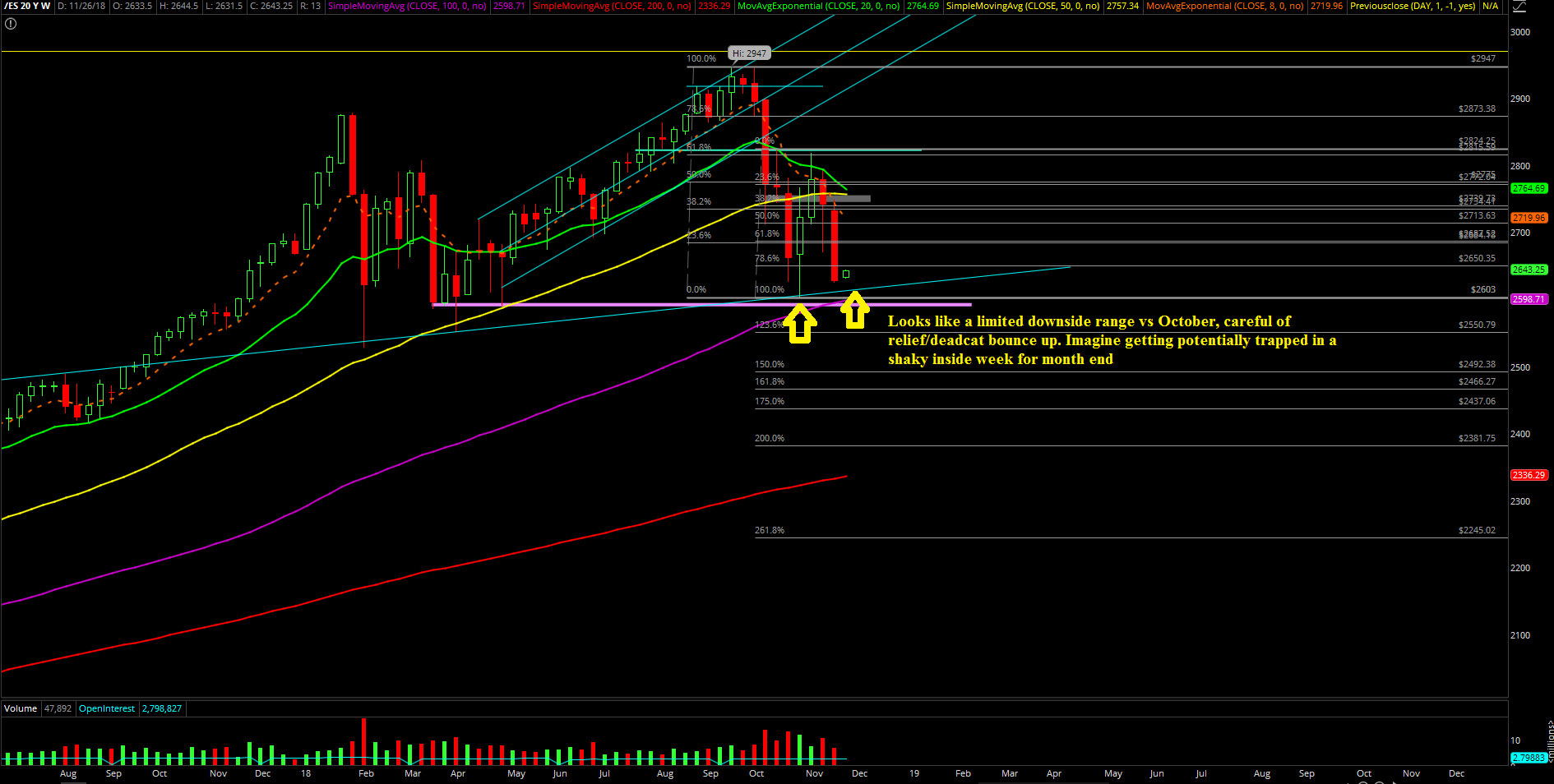 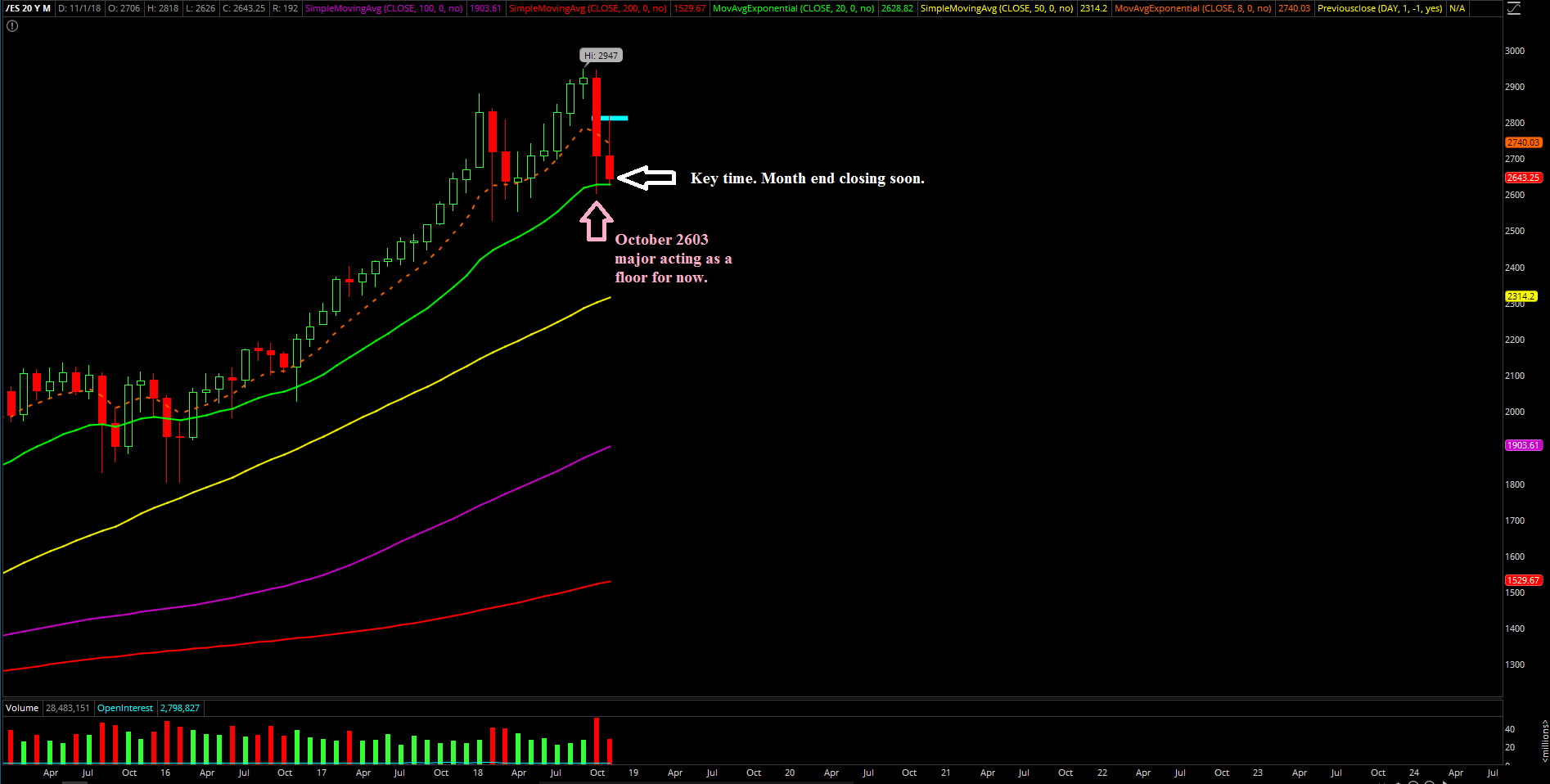 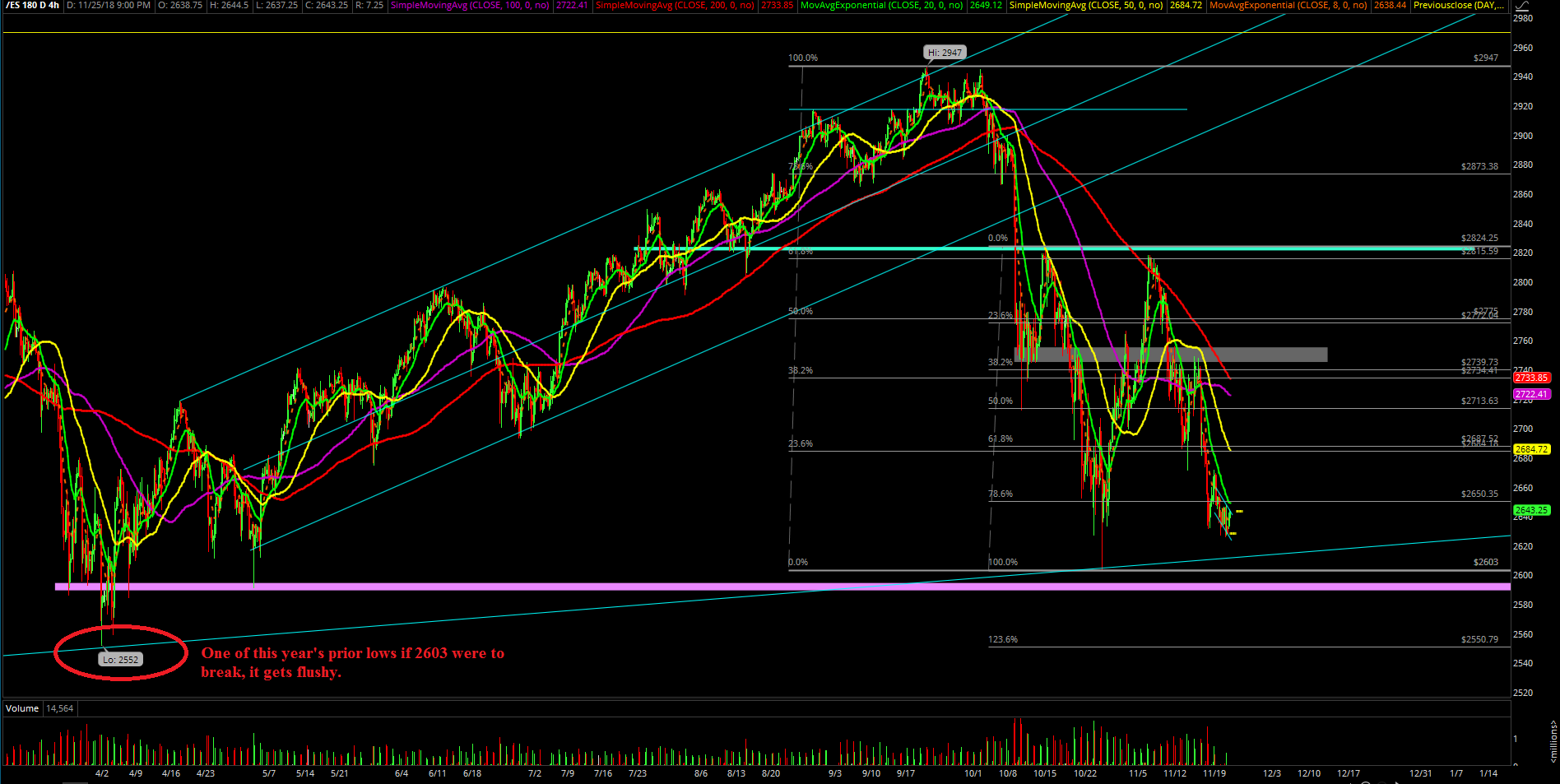 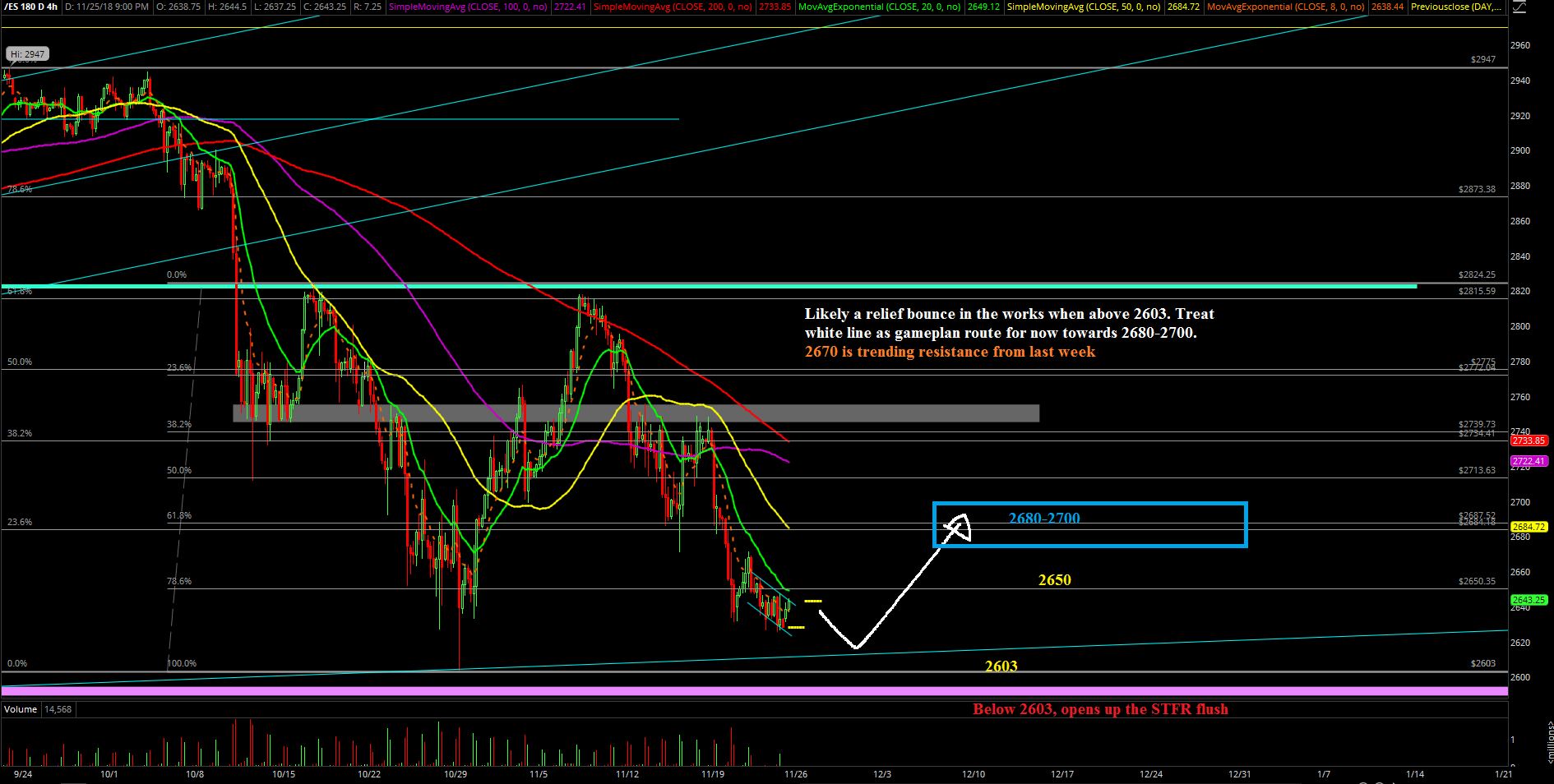 es nov25review5
Ricky Wen is an analyst at ElliottWaveTrader.net, where he writes a nightly market column and hosts the ES Trade Alerts premium subscription service.