Today was the first time in many years that I received a “nasty” note from a member due to a market move in the metals.  So, I probably should remind everyone that I have been noting that once the 28.50 level broke in the GDX, it invalidated our larger degree immediate bullish perspective, and you had a choice to stop out at that time.

But, as many of you know, I have been very clear that I am not stopping out, but have chosen to trade the short side set ups to offset the decline in my account due to the drop in mining stock prices.  And, I have provided those set ups to everyone in the room and in alerts.  In fact, today, we dropped down to the region we were looking towards from this past weekend.  Yet, we still do not have the signs of a solid bottom in place yet.

After reviewing how many others are seeing the market, it seems that most everyone is convinced that we have certainly topped in what we would call the blue wave i, and have begun a large consolidation phase.  But, as you know, that is our alternative perspective, whereas we think there are two possible counts in this market which have a higher probability.  And, should the more immediate bullish green count of the i-ii, 1-2 play out, it seems most will be left out of the market again expecting a bigger pullback than the market may offer.

I want to take a moment to explain my thought process to you and why I rank the probabilities as I do.  First, in having a lot of experience with metals, I recognize that they will usually run when the least amount of people expect it.  Right now, it would seem that the greater number of people in the market are certain that this is the start of a larger consolidation.  And, maybe they are right.

But, if they are, the next rally “should” be a clear b-wave rally in the larger degree wave ii.  If the next rally is truly only a b-wave, then we can always hedge our long term positions at either the topping region of the b-wave, or after a 1-2 downside set up in the c-wave of wave ii, or at both junctures.   However, if the next rally begins with a clear impulsive structure, all those that are certain that the market has begun a larger correction will likely be left looking lower as the market continues higher.  This is why the initial stage rally off the lows in early 2016 was basically straight up and had no significant pullbacks.  It caused many to chase, which did not allow for any pullbacks.  And, this is simply how metals run.

So rather than “assume” we have begun a larger correction, I would much rather let the market prove that to be the case.  In truth, we still see so many individual charts that need higher highs.  Moreover, if you look at the GLD, silver, and palladium charts, they are all set up in the i-ii, 1-2 off the lows, which means the heart of a 3rd wave can still take hold.  And, I would much rather take a little pain on the downside than miss the heart of a 3rd wave in the metals complex.  And, that is simply a decision I make personally.  Since your perspective may be different than mine, you can always choose to trade the move less aggressively than I would, or be much more cautious than I am on the next rally.  But, this is the mindset through which I will be viewing the next move higher in the market.

This morning, I sent out an update, within which was the following paragraph:

Now, many are concerned that this is the larger degree wave ii already.  And, as I have noted, it is possible.  But, within such a structure, the a-wave of ii usually will target the .382 retracement of wave I, which is in the 24.40GDX region.  So, if the market is unable to take out the lower resistance region on the 8 minute chart, and continues down towards that region in the GDX, then I would begin to take that potential much more seriously.  And, even in that circumstance, there is a great likelihood we would see a rally that would re-test the underside of the channel from which we just broke out. And, that would be a nice short set up for a c-wave down.

This means that, at the end of the day, I have to recognize the strong bullish set up in gold, silver and palladium, which would match the i-ii, 1-2 structure I have presented on the daily chart on the GDX.  But, should the GDX continue down this week towards the 24.40 region, then I will have to take more seriously the potential of the larger blue wave ii, which will likely take us into October before it bottoms.  But, even so, a b-wave rally should take us back up towards the prior market highs in the GDX before that c-wave down takes hold to complete the wave ii.

So, as I see further clues, I will certainly alert you to what I am seeing. 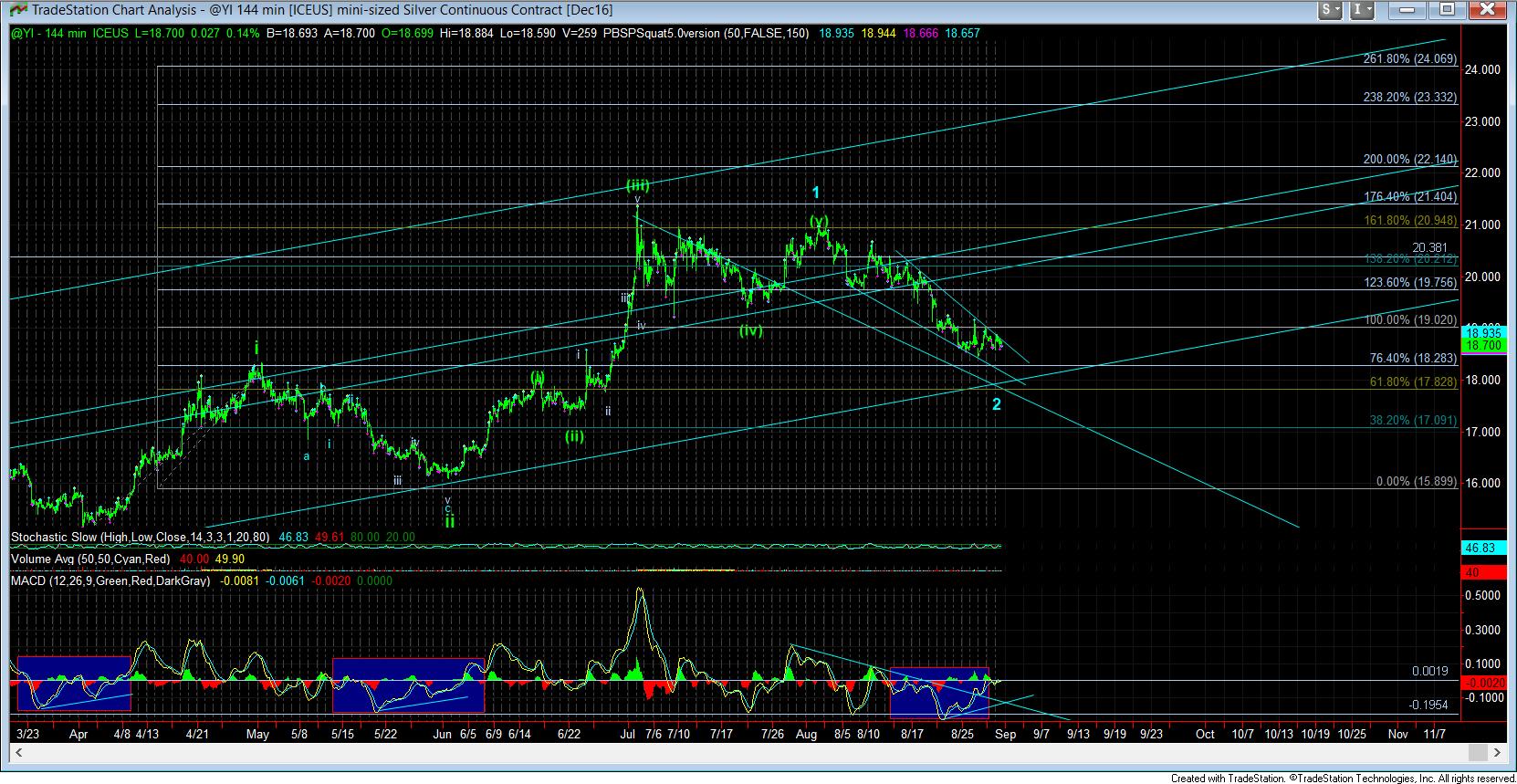