When I looked over the action in the metals yesterday, and then the posting in our Trading Room, I am not sure I saw a “correlation.”  The amount of movement seen in GDX and silver relative to Monday and Tuesday’s lows were not at all relatively large, yet many of your emotions seemed quite dramatic.   To me, it means that some of you may be too heavily weighted in this complex or have too much risk on the table.

While we clearly see the huge potential in the long term in this complex, it does not mean that one should be ignoring risk management concepts we have posted in our room over and over.  As for me, you all know that I have deployed the great majority of my long term capital I have designated to be placed into this complex by the end of last year.  But, that does not mean that I have gone outside of the reasonable risk management perspectives that have allowed me to grow my portfolio through the years.

Moreover, I have noted in the trading room many times when I look to hedge my portfolio longs in this complex, at least until I have a strong confirmation that this bull market has returned.  And, until we see a high volume break out over last week’s high, I will maintain a significant amount of those hedges.

On another note, much has been made about the HUGE COT commercial short positions in place now, which suggest to those that read those tea leaves that the market is going to drop in a big way.  Maybe they are right, and, if you are like me, you had the opportunity to appropriately hedge for that potential when we noted so last week.  But, the commercials have not always been right.  And, to be honest, I would almost expect someone to be HUGELY on the wrong side of the start of a major 3rd wave.  Remember that price action in the heart of a 3rd wave is usually breathtaking.  And, in the metals complex, we should expect that even more so.  That means that someone is going to be massively on the wrong side of that move, and the short covering will be part of the fuel that will propel the heart of a 3rd wave higher in a most dramatic price spike.

So, the fact that we have a 3rd wave set up is much more important to me than the way the commercial traders are positioned.  Moreover, if you are like me, you should have no problems sleeping at night with your long term positions in place (and, I am not in any long options, only stock until the long term bottom is confirmed), and all appropriately hedged.  The market will ultimately provide us with a long term bottom confirmation, but it has not yet happened, so one has to just take a step back, and look at the market from a non-emotional and reasonable perspective, which you must apply to your overall positioning.

Now, I think I have spoken about positioning a bit much this week, so let me address the count.  Not much has really changed since the weekend.  The GDX and silver look to be in their wave (ii) of waves 3 of iii.  In fact, silver has the clearest count to me right now.  And, as long as it remains over 16.60, I am viewing this quite bullishly.  But, it also means that we are now in the c-wave of wave (ii), and on a micro level, we may be about to start the 3rd wave down in the c-wave of wave (ii).

In the GLD, I can make an argument that it too is only in the 3rd wave of the c-wave of its wave 2 of iii.  But, GDX has been a bit overlapping of late, but I would almost have to assume that it too can still see a bit lower before we are set up for the break out.  So, as I noted before, I still have no reason to release the hedges I hold on my long term positions.

In order for me to change my immediate perspective of looking a bit lower to complete this pullback, I will need to see an initial 5 wave structure off a local low, followed by a corrective pullback, and then a rally over the top of the initial 5 wave structure off that local low.  That will place me on strong warning that the heart of a 3rd wave is about to take hold.  But, until such time, immediate pressure remains down. 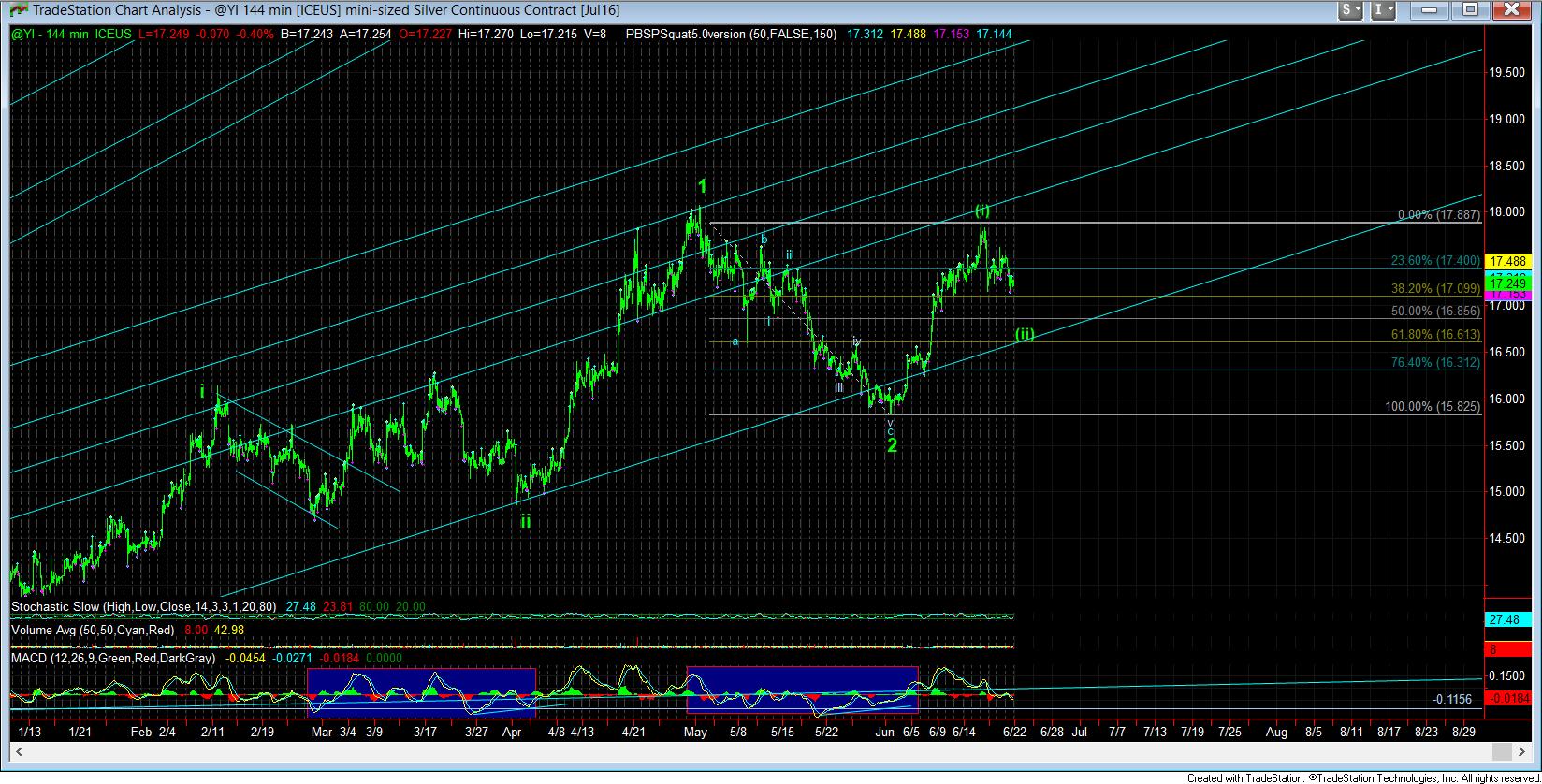