Monday’s session was a deadly and massive bull trap due to the morning false breakout above the key 2693/2700 levels with the high at 2707 that lasted for a brief moment that looked like the start of a significant temporary bottom formation vs. Friday’s 2627 low. Eventually, the market managed to tank about 100 points vs. the intraday high towards the 2620/2590 majors that finally caught a bid at the 2603 intraday low before rocketing 40 points into the EOD print.

The main takeaway from this session is that all the overnight large gap ups or gap downs have been filled lately during RTH and today was no exception. This means that the large ranges from the overnight globex session are unable to do the standard continuation setups during RTH and just playing ping pong with us. For the short-term timeframe, the STFR crowd continues to dominate the market as price action remains below the key trending levels of 2693/2700 as shown by today’s action, but the intermediate timeframe is showcasing another prospect based on the weekend discussion.

Daily closed at 2639.5 with the intraday range high at 2707 and low at 2603. The market lost about 22 points vs. Friday’s close after all that’s said and done, but at one point was over 100 points loss from the intraday highs to low. This is the third session this month that had over a 100 point intraday range.

As discussed in the prior report: heading into this week, the major support levels were still the same at 2620 and 2590 along with 2600 being a major psychology number. Also, the bears crowd utilizing the STFR strategy when below 2693/2700 in order to take advantage of the immediate bearish momentum from the prior days. With this morning’s head fake above the trending resistances of 2693/2700, it obviously resulted in a massive intraday bull trap so we need to move our parameters up a notch. We need to at least see a daily closing print above the 2693/2700 region in order to enhance odds for the things that we are stalking on the intermediate timeframe.

At this point not much has changed today for the short-term levels, but we think the action is getting quite close aligning with the intermediate timeframe to be on the lookout for some sort of a stronger temporary bottom formation.

Repeat: short-term traders should utilize STFR when below 2693 to take advantage of the immediate bearish momentum before it finds a significant temporary bottom formation. Conversely, if bulls reconquer 2693 and then 2700 immediately(better if wait for a daily closing print), the odds of a significant temporary bottom increases dramatically and traders need to be aware of the backtest against the major levels that had become resistances now like 2745 and higher.

If we zoom out a bit, we must be cautious here and on the lookout as the bigger pattern/setup is indicating to us that the action is getting rather close to some sort of a stronger temporary bottom. In today’s recent example, the 2600 psychological number (every 100 points) and 2590 major managed to defend well against the bear freight train as the market caught a bid at the 2603 lows. Obviously, there’s no confirmation yet as market is just hovering within the day’s range but we’re watching this closely as a lot of supports coincide around this region of 2620-2590. Thinking out loud, if things stabilize for the scenario, then the deadcat bounce/sustained bounce would be quite large even with a 50% retracement of say 2947-2603, that’s 174~ points already back to 2775~. We’ll take this day by day, but something to ponder about if the macro picture is playing out this year’s ranges.

Please note: we are prepared for the worse if things do become crashy/flashy instead; we see no siginificant supports until 2550/2529 if the majors of 2620/2590 do not hold. 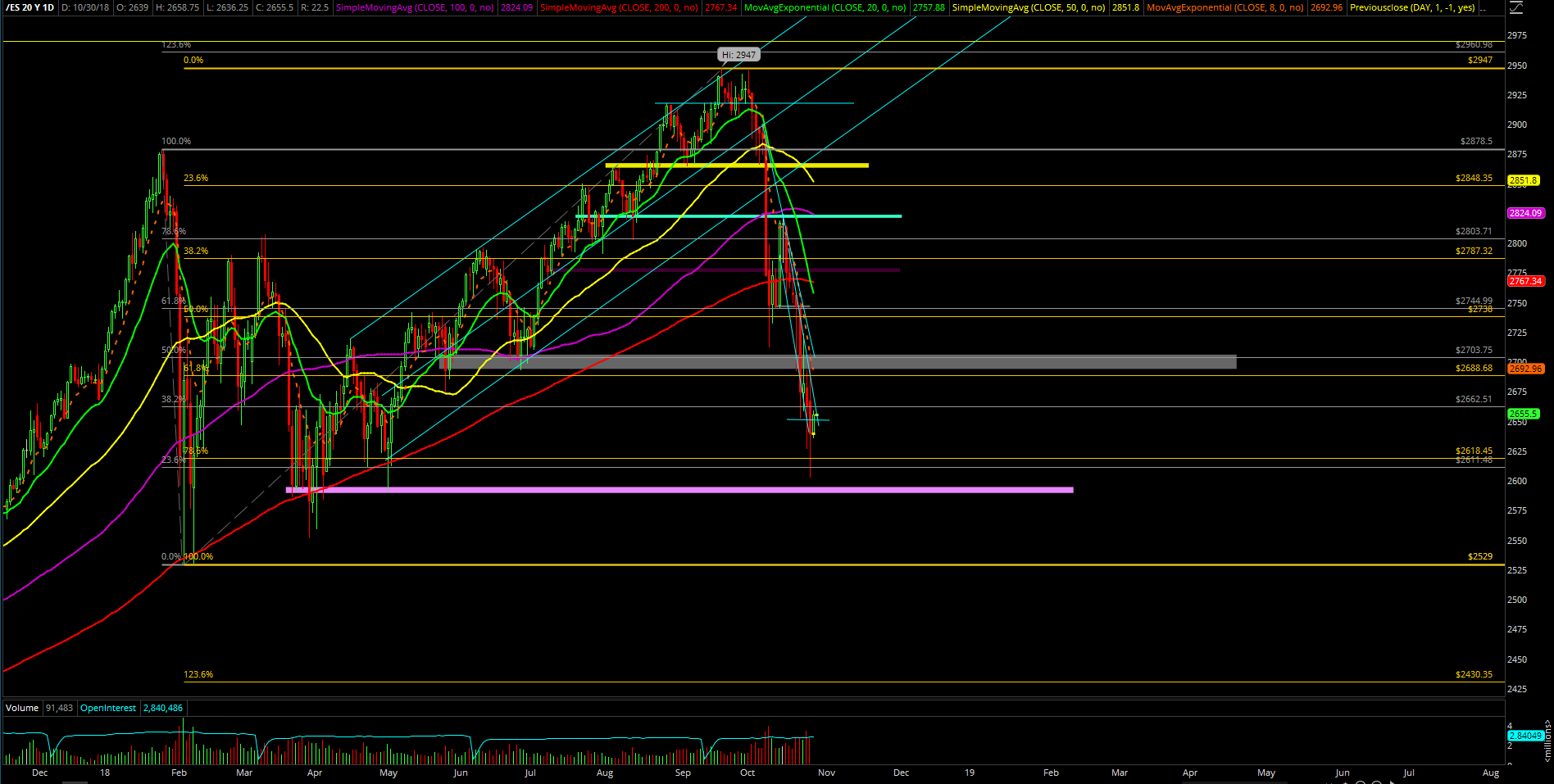 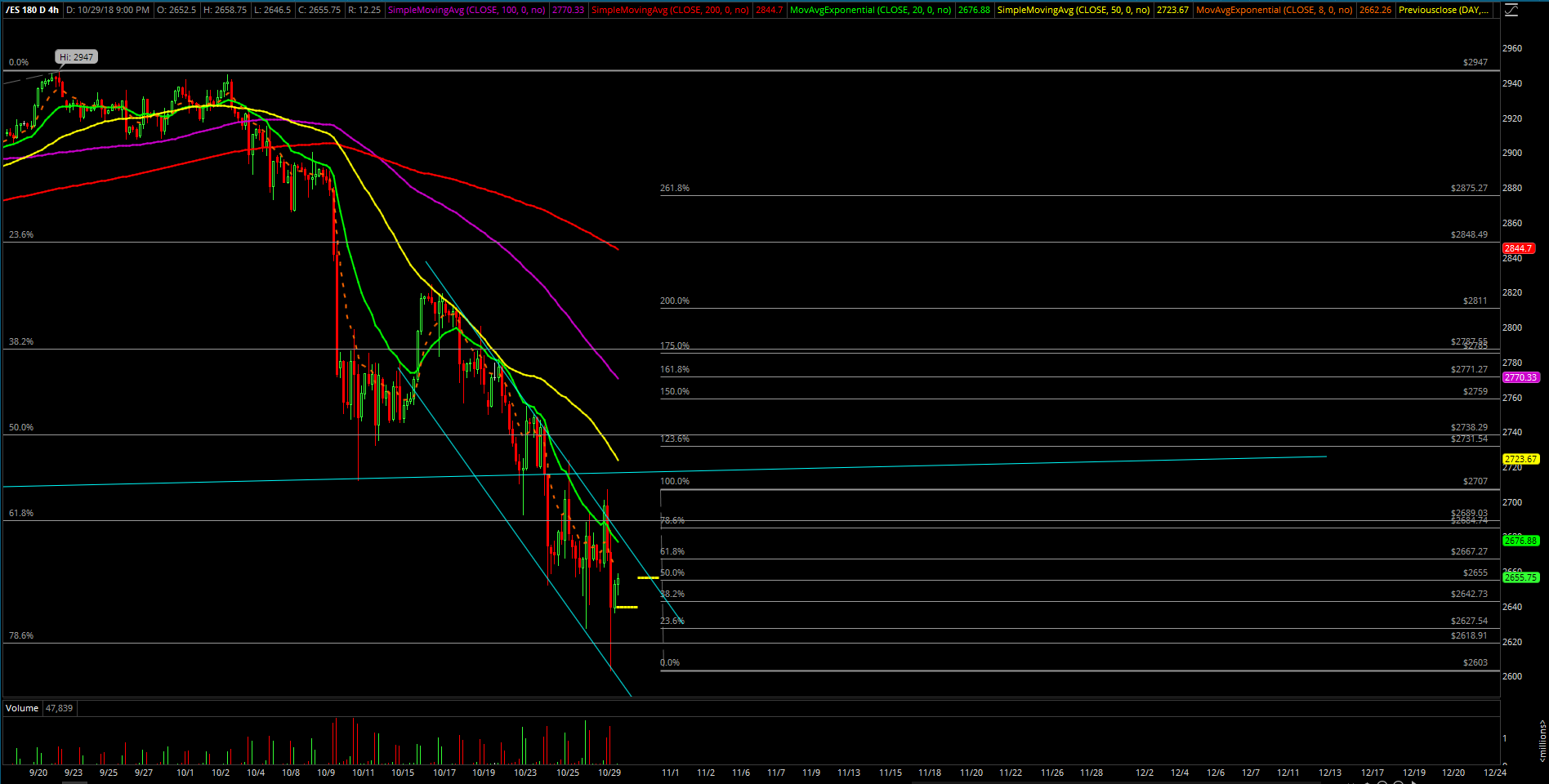 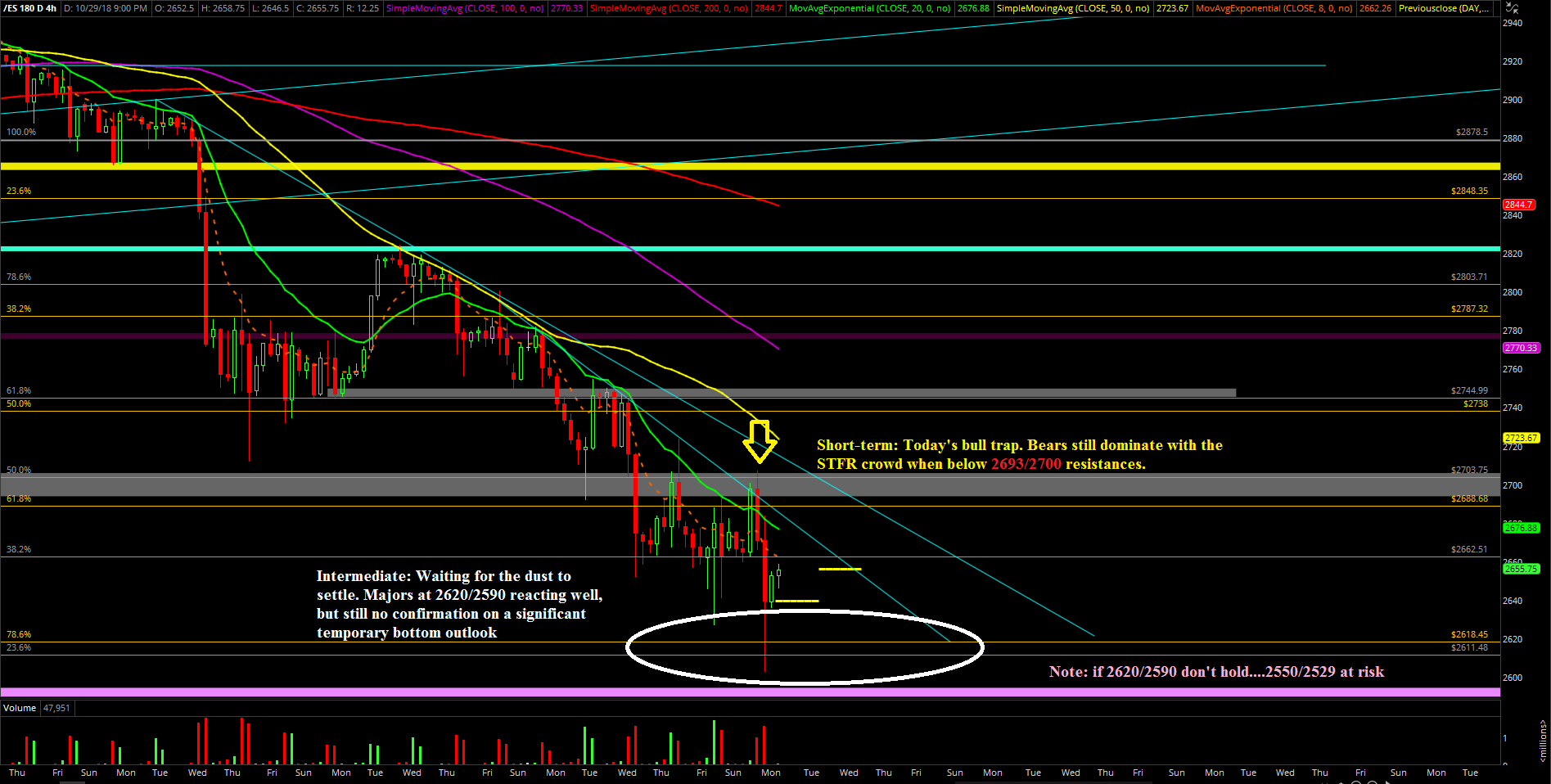 es oct29review4
Ricky Wen is an analyst at ElliottWaveTrader.net, where he writes a nightly market column and hosts the ES Trade Alerts premium subscription service.