The second week of September was the third week of the upside bullish continuation pattern since the August 26 sticksave bottom at 2810.25 on the Emini S&P 500 (ES). Basically, the market completed our expectations of the week by fulfilling our immediate targets at 3000 and 3014 alongside with battling against July’s all time highs. The week gained 0.87% or 26 points and was able to decisively close above 3000 pivot.

The main takeaway is that the bulls still remain in full control in terms of immediate momentum especially when trending above the 2955 "sh*t hits the fan" level from July. If you recall, the market bottomed at 2957.25 last week and made a textbook higher lows pattern. Heading into this week with a few timing catalysts, it’s fairly obvious on what the goals are for each side after the consolidation pattern takes place. Bulls are trying to immediately make new all-time highs and be on the way towards the 3193.75 measured move year-end target from months ago. Vice versa, bears are trying to break 2955 and open back up the threat that they resurrect themselves from extinction and maybe go for the September monthly low of 2889 backtest to see if it holds or breaks.

Friday closed at 3009 and the bulls managed to close at the highs of the week within the 1% metric of the highs so they are rocking a 72.9% winrate YTD (27/37 weeks). Quite unbelievable when you look at raw data and statistics and filter out all the noise.

Some key points may be repeated from ES trading room’s premarket gameplan report:

Daily chart – Decisively above 2955 shit hits the fan level of July and rocking daily 8/20EMA uptrend. Also, it rode at the daily bollinger band highs last week and doing a little mean reversion since the Sunday night gap down.

Weekly chart – Picture perfect ‘hold half and go’ continuation pattern playing out since August 26th week. Bulls completed week 3 of the continuation pattern so it’s normal to expect some sort of consolidation/digestion for this week given the overall range 3025.75-2957.25 and the timing catalysts on Wednesday and Friday. As you could see, it is technically no longer an inside month anymore within August range 3014.25-2775.75 as price broke above it for a few hours last week. Let’s see if price sustains above it in the coming weeks to enhance odds further for the bull train. 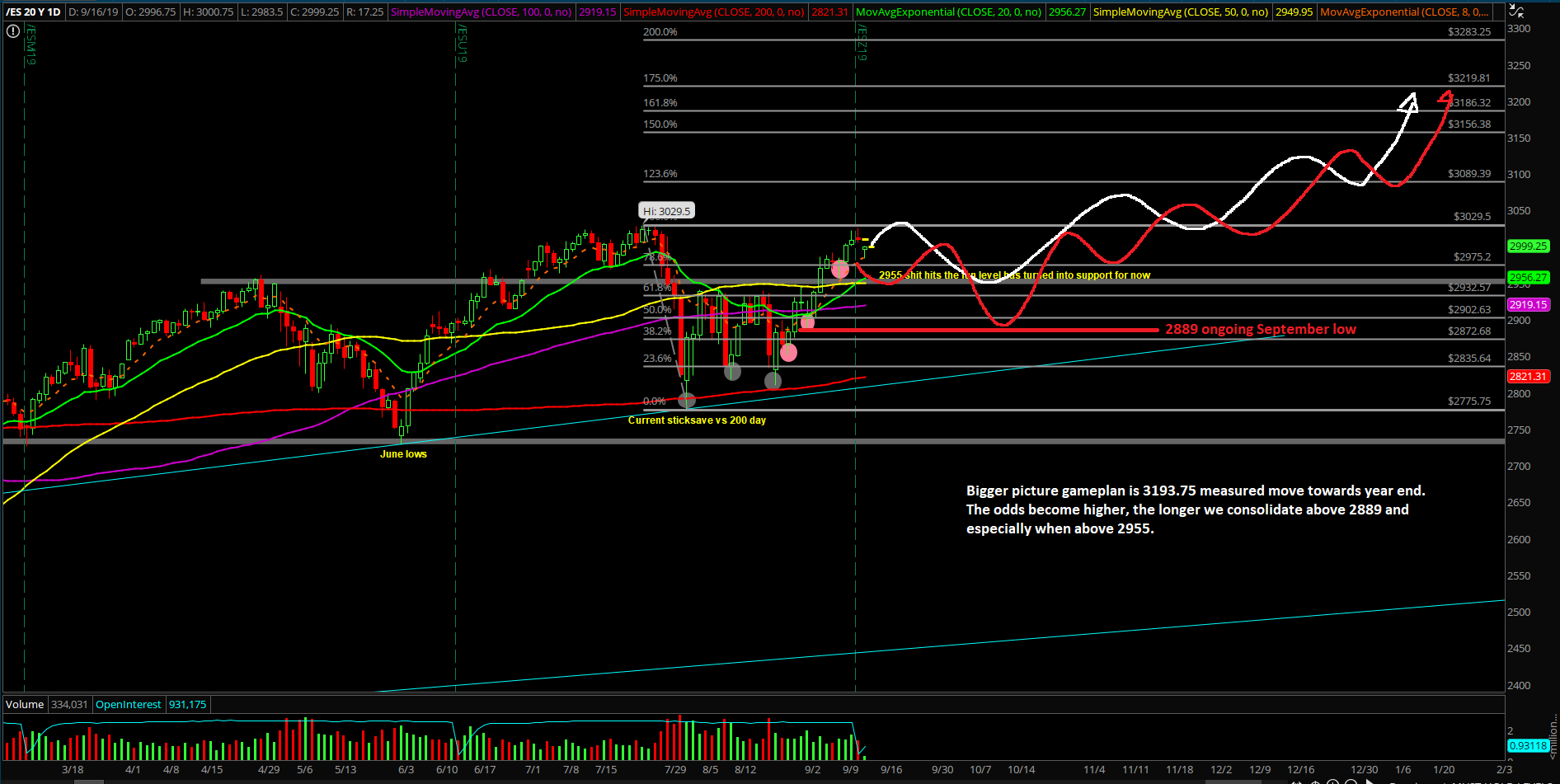 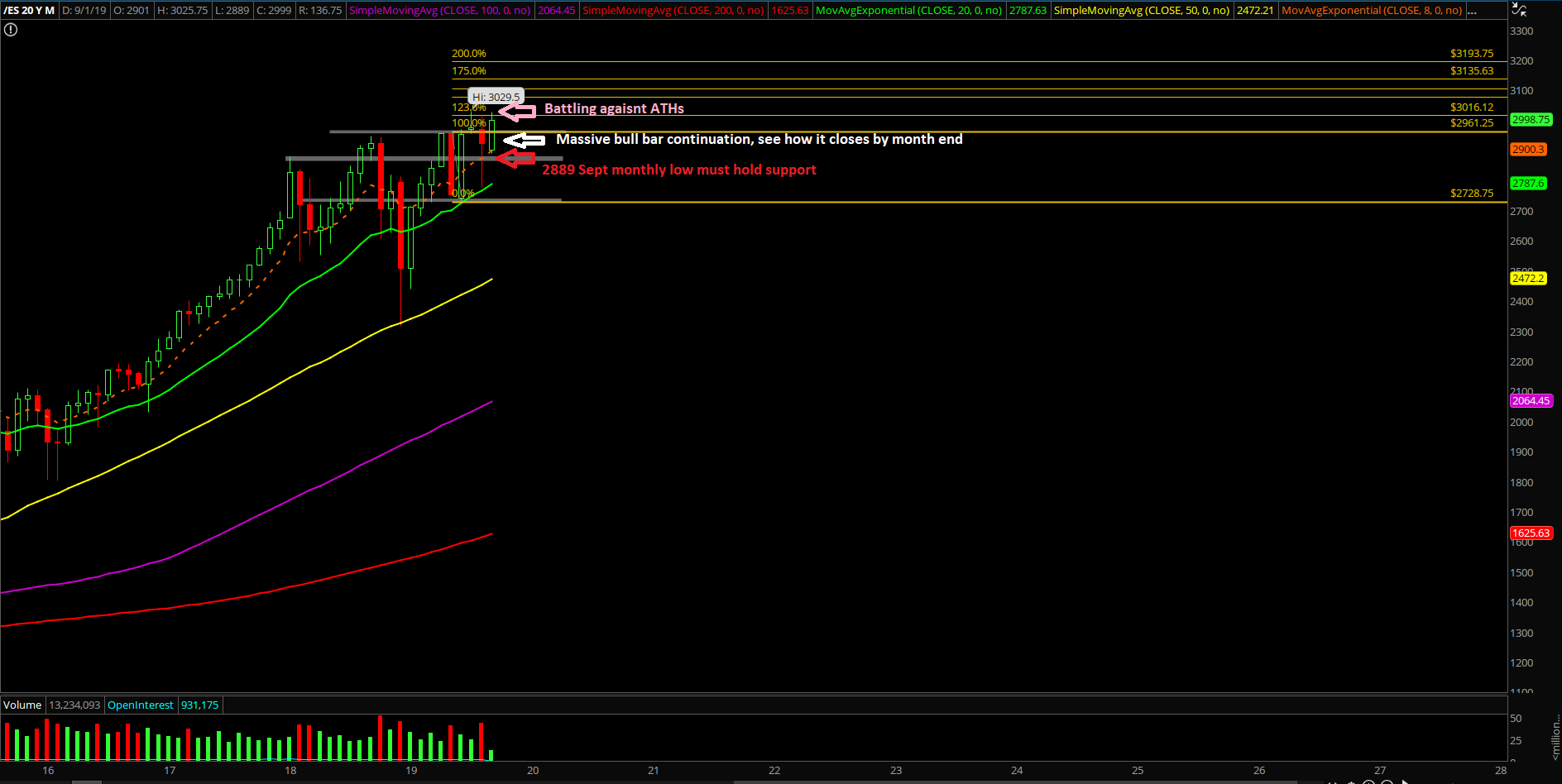 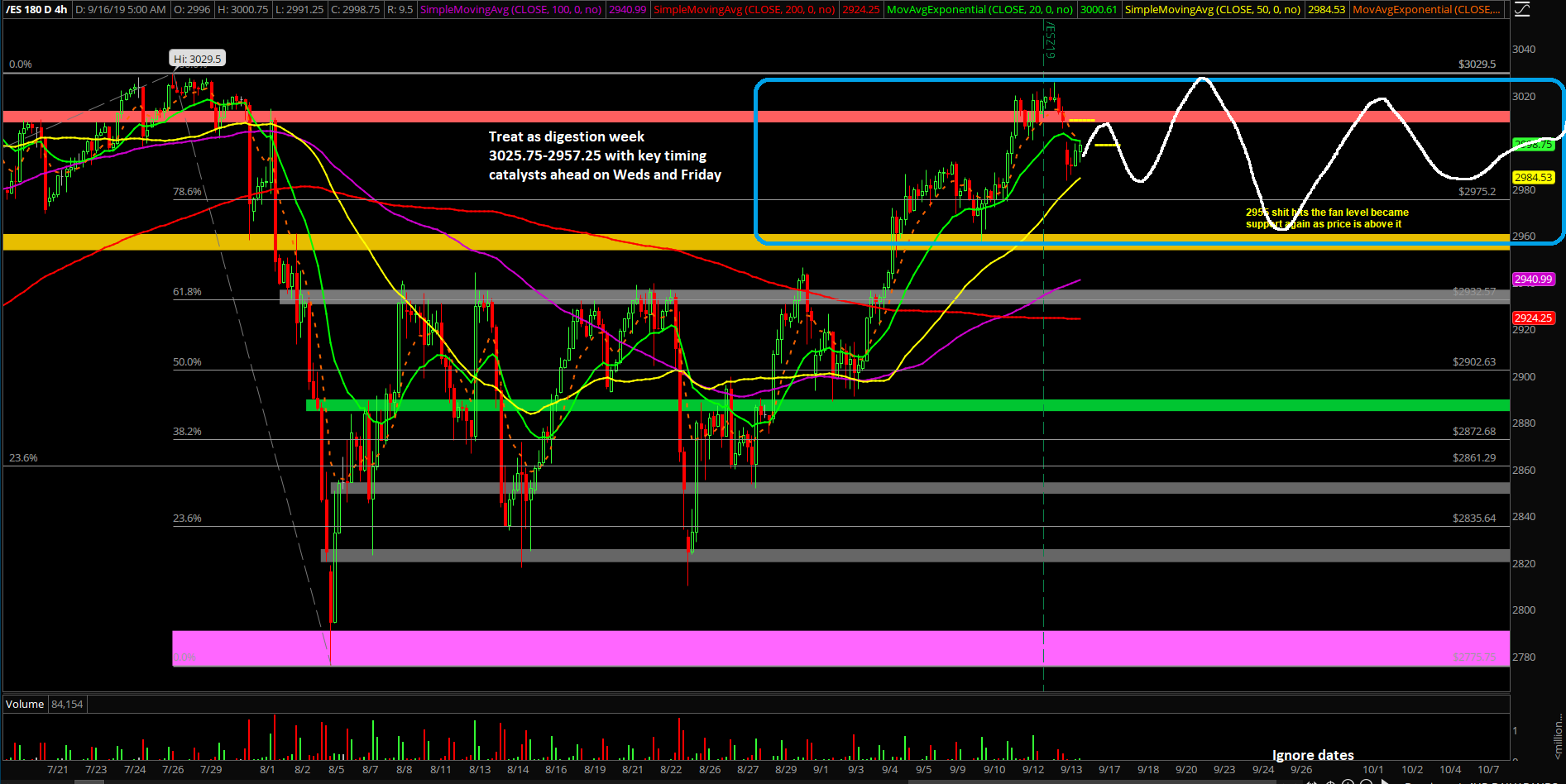 ES SEPT16WEEKEND_REVIEW5
Ricky Wen is an analyst at ElliottWaveTrader.net, where he writes a nightly market column and hosts the ES Trade Alerts premium subscription service.