The third trading week of June was quite eventful in terms of the overall fluctuations when compared to the previous week just stalling in a range against the major 2800 resistance level on the S&P 500. If you recall, during the prior weekend’s report, we discussed whether the market was double-topping at the March high or in a high-level consolidation, and the market made up its mind with the lower highs and lower lows pattern.

Basically, it started with Monday being a typical range-bound session that resulted in a daily doji candle and then the market really started to accelerate to the downside in a very steep manner during the after-hours. It dropped from the day’s 2778 closing print to a 2735.75 low by 3 am European opening trading hours. It was nearly a 45 point drop overnight that "stick-saved" at precisely the 50% fib retracement point and also just a bit under our key 2740 support. As Tuesday’s session went about, we eventually treated the 2735.75 low as the temporary low for the week given the subsequent rebound into the mid-2760's by the end of regular trading.

Fast forward to the Wednesday after-hours trading period as nothing much occurred during the regular session it was a range-bound day that closed at around 2770 on the S&P 500.  The market began to make another quick and steep pullback at 2785.25 after failing to break above the Sunday night high of 2786.75. Eventually, the market during overnight hours made a temporary bottom at 2762 around 5AM that was immediately crushed during the regular trading period into a low of 2747, and the session closed at around 2751. Friday’s session was similar to Monday and Wednesday as just another range-bound day after a big move.

What’s next?
The main takeaway from this week is that if you look closely at the overall pattern of how the market went about its way, it obeyed the temporary top formation of 2796 from the previous June 11 week with a lower-highs formation in a fairly controlled pullback into support that never really got out of hand as price held against the stronger support levels as well. Also, the majority of the big moves that occurred this week were during the after-hours, with the regular session more for range-bound consolidation into making the next drip/drop down.

Friday closed at 2756.5, and it was a weak close considering the last 30 minutes took out the intraday low of 2757 in what had been a 10-point range-bound day.

Heading into this week and June's month end, we’re still treating 2735.75 level as a temporary low and we ought to be cautious if the market decides to keep consolidating inside the 1-4 hour triangle range such as 2740-2780 with the higher lows and lower highs pattern on the micro. As of Sunday night's writing, the market was a bit weak with price just hovering around 2745, so we need to see first thing Monday if bears can breakdown below the 2735 lows or if the market stick-saves again and remains within the 40-point triangle range for the time being heading into month end.

Zooming out to a weekly and monthly chart basis, we still have 2729 as a strong support from the June 4 weekly low and 2720 as another prior breakout level. Also, obviously the 2700~ number would be the next major level, as every 100 points is pretty much major and considered significant as demonstrated recently with the doublet-top under 2800. These support levels are what we are prepared with in case 2735 goes and the market needs to find the lower end supports to back-test.

If we zoom out a little more heading into the July 4 week and the month of July in general, we’re expecting this pullback/consolidation phase since the 2796 temporary top in the Emini S&P 500 to come to a halt soon as the bigger picture is still a grind up/bull train pattern from the May 2590's low. 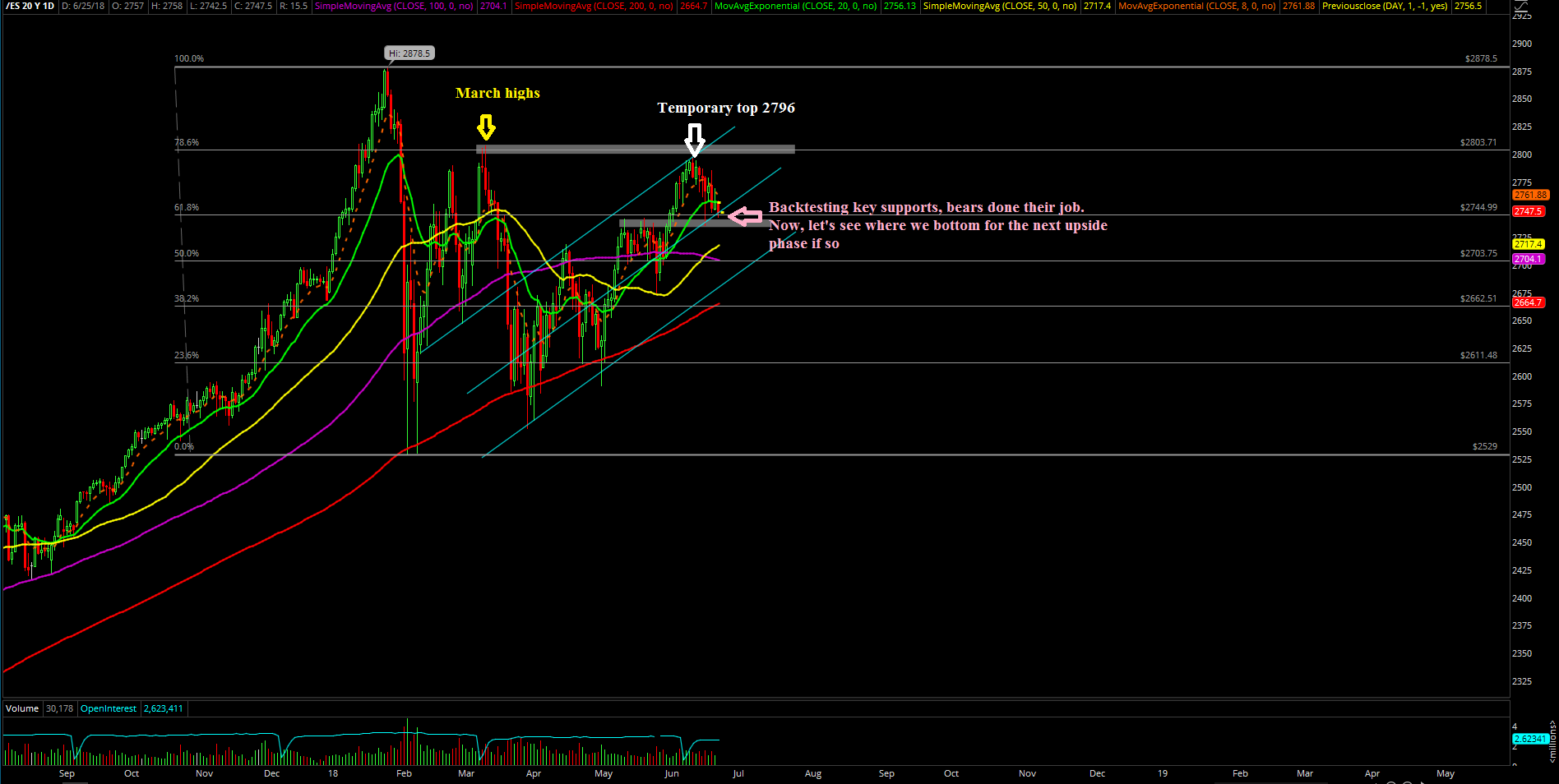 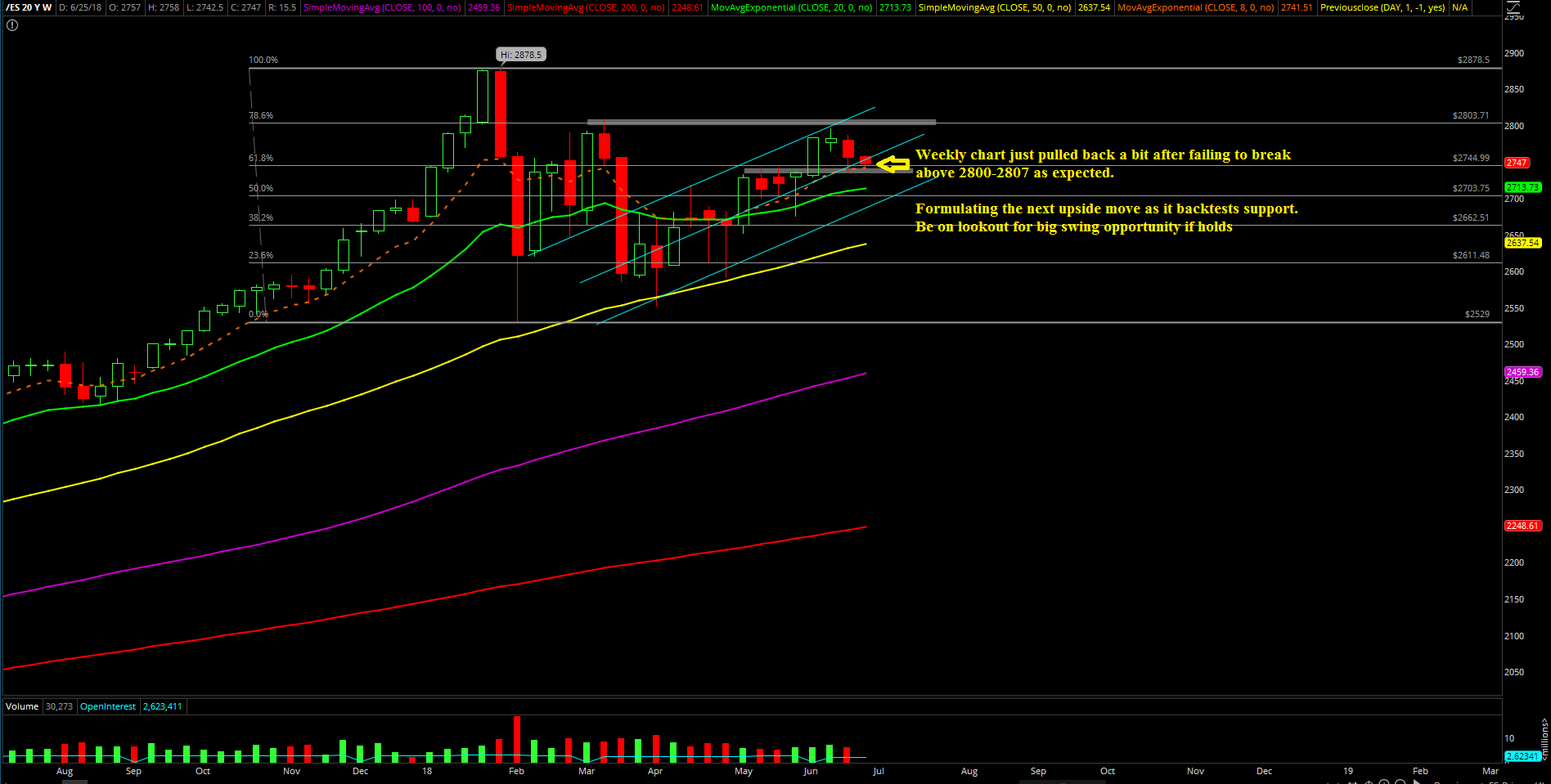 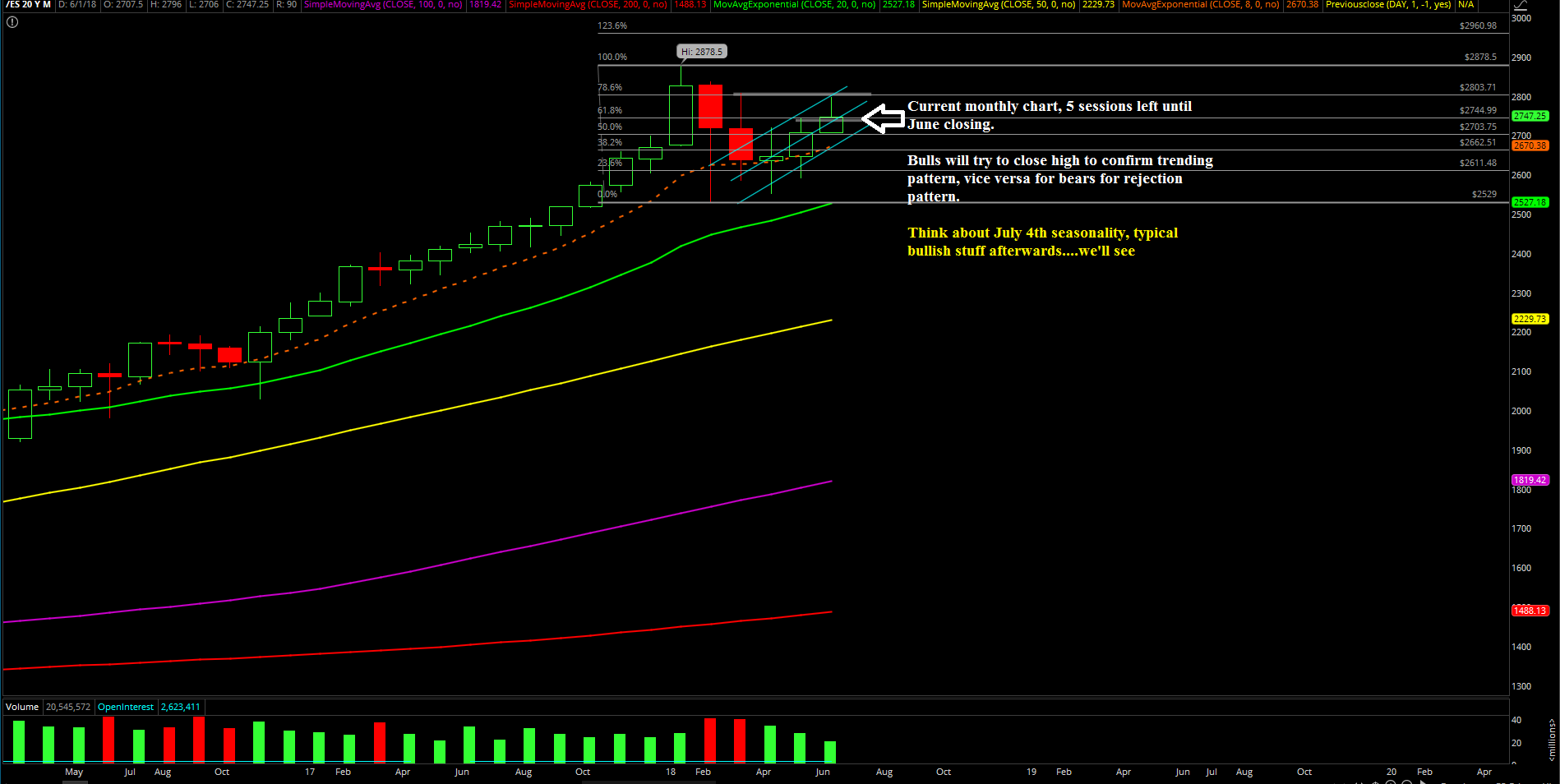 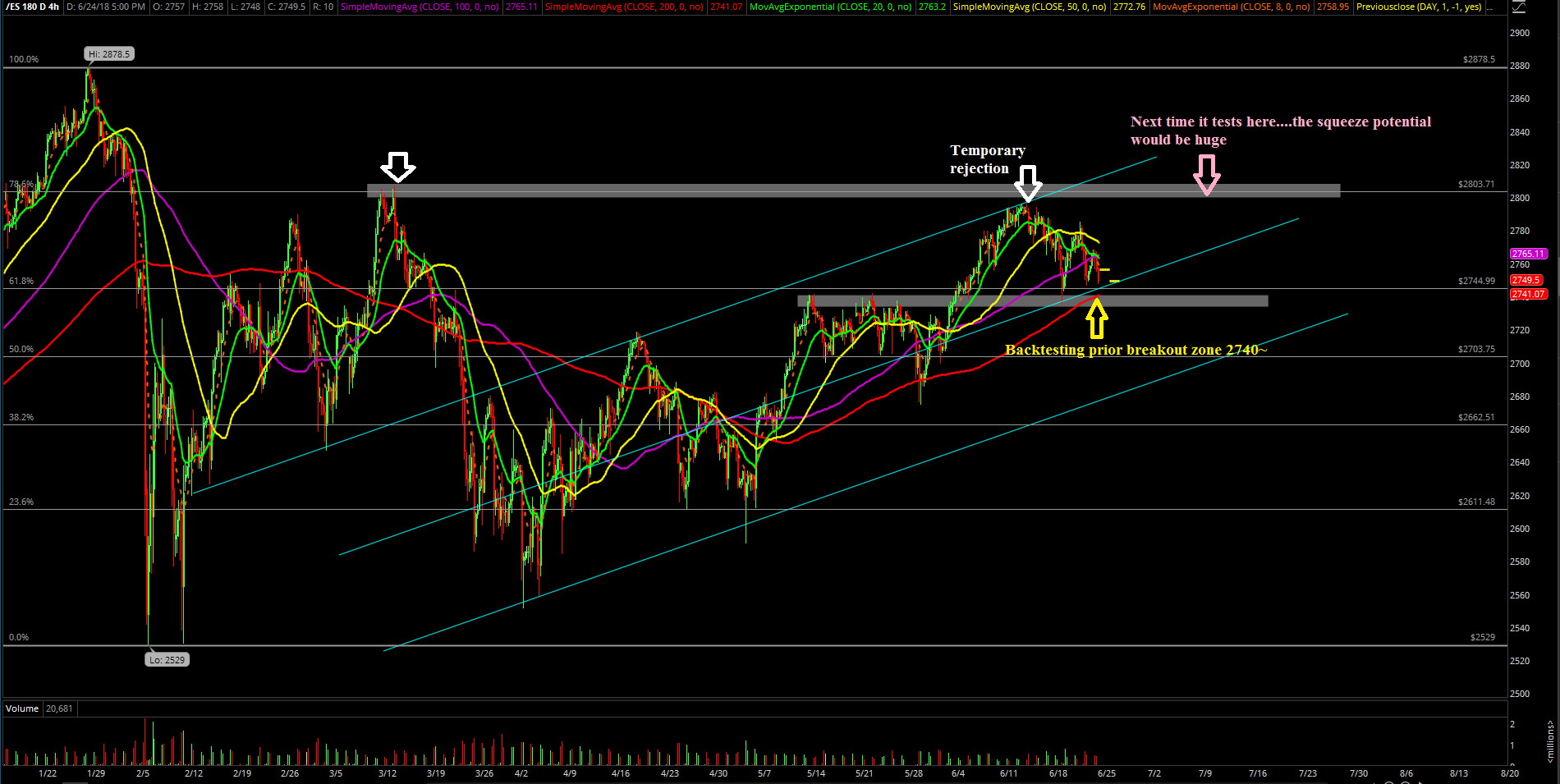 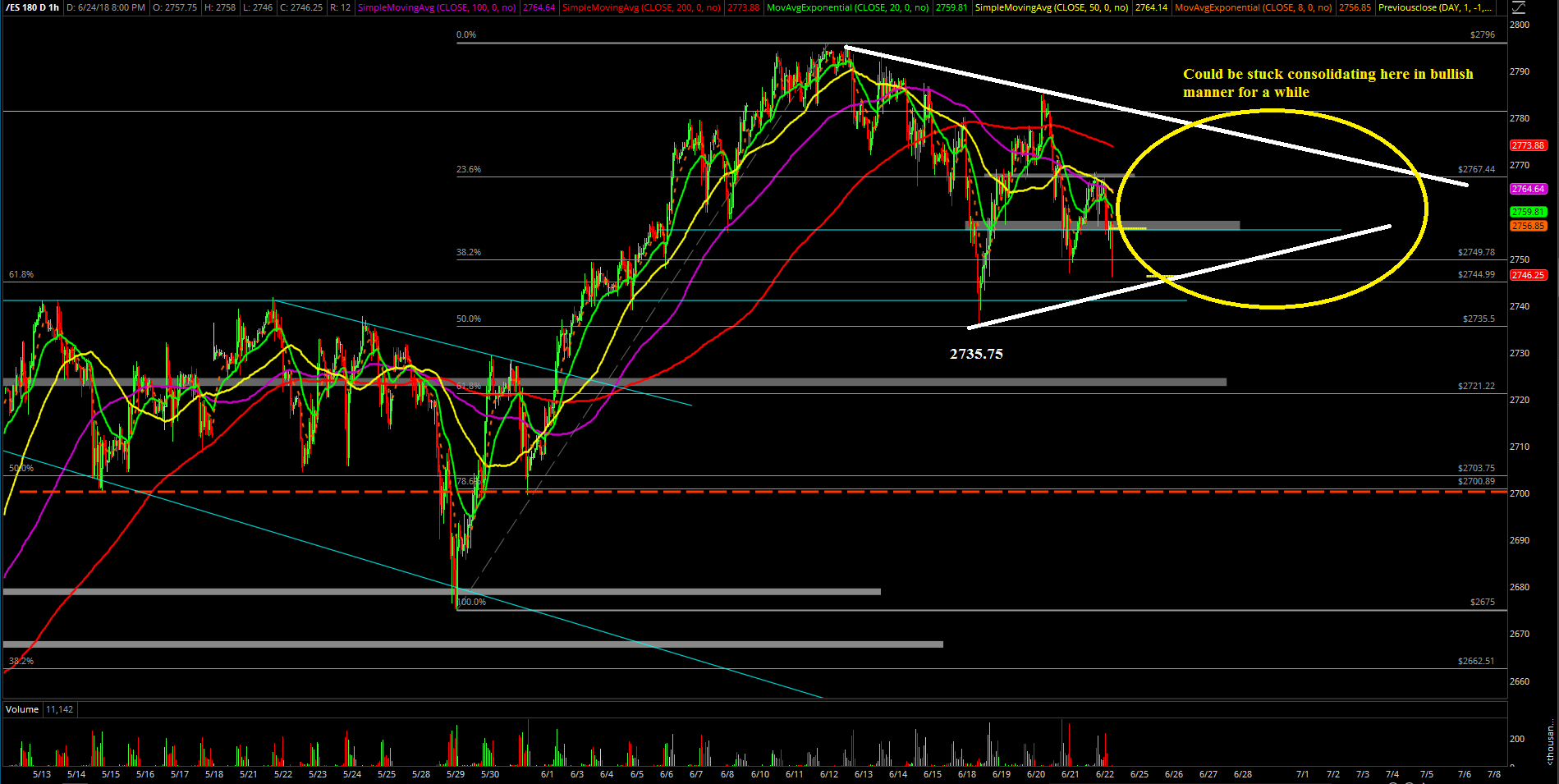 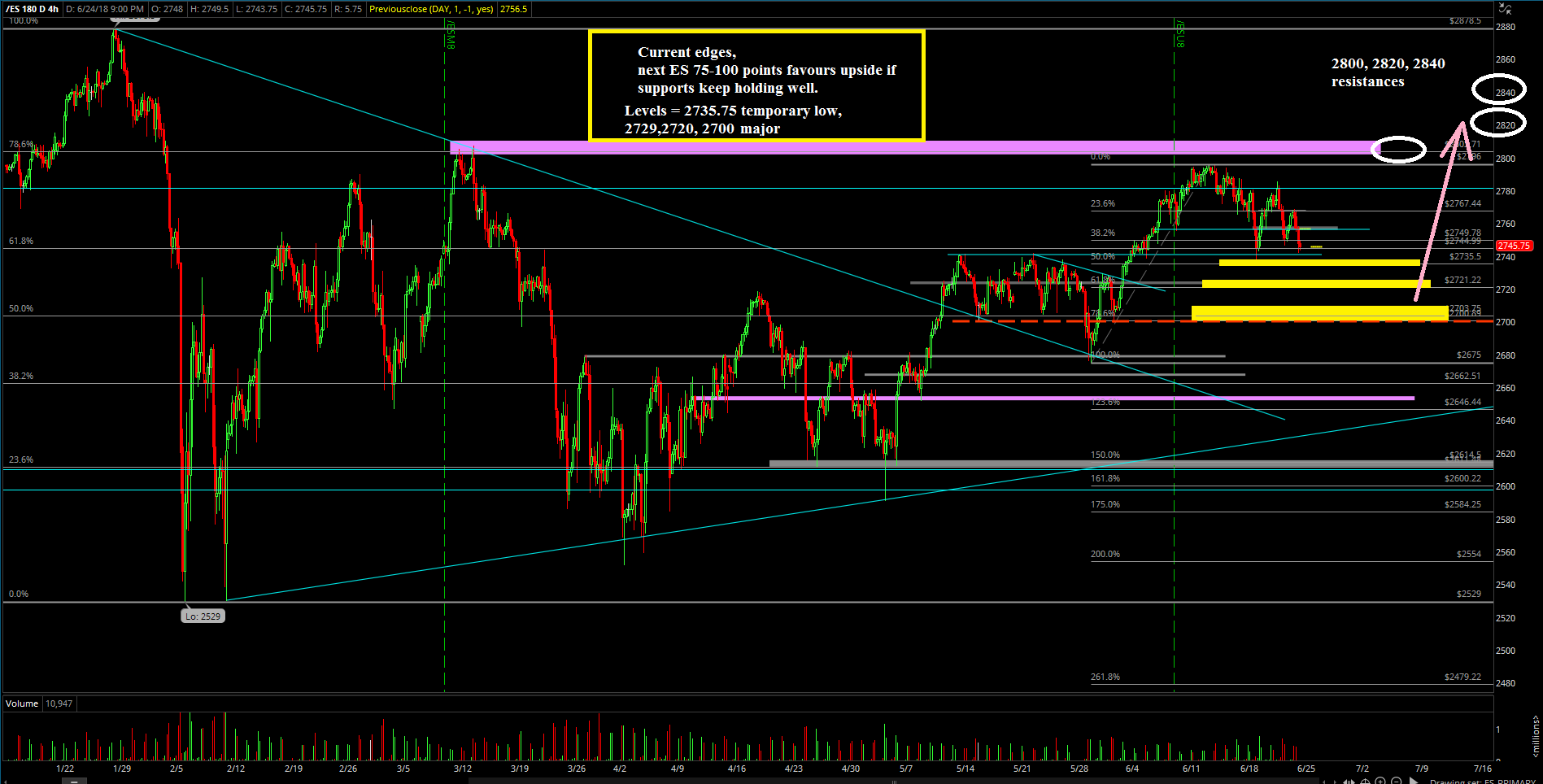 es june24review6
Ricky Wen is an analyst at ElliottWaveTrader.net, where he writes a nightly market column and hosts the ES Trade Alerts premium subscription service.