I have been trying to give the metals charts the bullish benefit of the doubt whenever they show potential to break out.  But, it seems my faith in their ability has been unfounded once again.

With the GLD breaking support early today, it started giving us clues early in the day that we may not be seeing the break out potential for a few more weeks.  With the drop today, we have now a structure in place that seems to be pointing to at least the 123 region in the GLD, which we will be counting as a c-wave in wave (ii), as presented on the GLD charts.

But, even though the structure is such that it is pointing lower, I cannot say that the 8-minute technicals are really supporting this wave count to the downside.  You see, we really should not be seeing positive divervgences in the wave iii of 3, relative to the wave 1 down, which is clearly evident on the 8-minute chart.  That is often an indication that this drop is corrective rather than impulsive.  But, as long as we remain below 126.75, the structure is pointing down.  Yet, the technicals are telling me to stay on my toes.  So, while I will follow price, I am a bit skeptical due to the technicals . . . at least for now.

As far as the GDX is concerned, I have to be honest and note that this micro count is an absolute mess.  I really have nothing reliable for a micro wave structure other than it would seem we should try to break below the low struck in February.

And, as for one of the GDX’s largest holdings – the ABX – we clearly did not get the type of follow through that we ideally wanted to see this week.  And, as I noted, this certainly opens the door to seeing a lower low in the 10.80-11 region.  However, I am going to maintain a bullish pattern on the chart, even though it is only a leading diagonal, which I clearly do not like to rely upon.

So, at this point in time, I think I am 50/50 as to whether we get a lower low.  You see, I cannot say that the drop off the highs is clearly impulsive, and we have already struck our long term target on the ABX on the downside.  So, while the impulsive structure may continue to develop over the coming days, I cannot say I have a clear wave structure pointing to 11 at this point in time.

This now brings me to silver, which really looks like it completed a b-wave triangle.  That places us in a c-wave of wave 2, which seems to be targeting the 15.85 region.

It seems that the market has a desire to torture bulls a bit longer, as it fills out ever further corrective action.  And, it also seems that the GLD has the clearest pattern at this time.  So, as long as we remain below 126.75, I am going to expect this to take more time until this pullback completes. 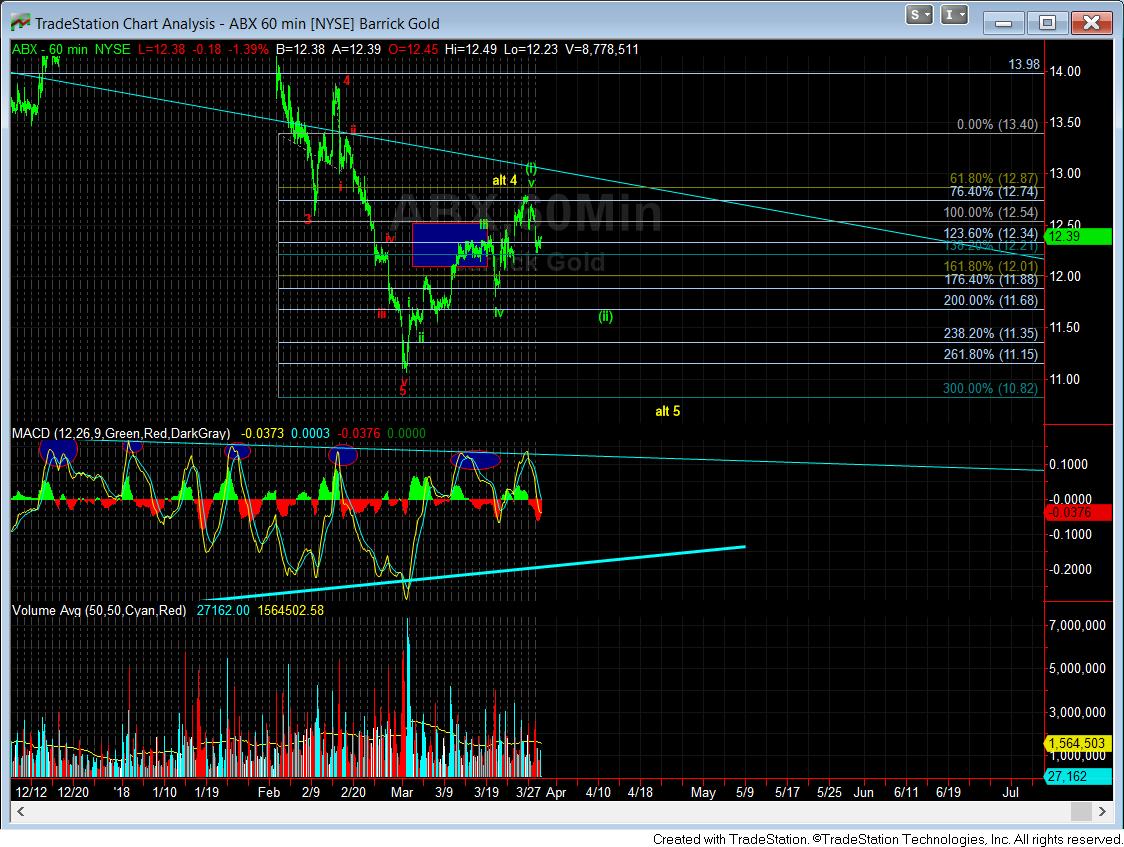