The last week of June completed as an inside week that traded accordingly almost within the pre-determined 2969-2915 high level consolidation range perfectly per prior KISS report. If you recall, it was expected that market needed some time to digest the third week of June’s breakout +1.8%.

Essentially, the market action started the consolidation on lat Monday and it backtested against the 2915, a major must hold level with 2914.5 printed as the sticksave to become the low of the week by Wednesday. Then, price action broke back above the bull flag acceleration trigger level at 2940 on Friday and closed around the dead highs attempt of the week/month/quarter end. In reality, the entire range of last week’s played out to be 2961.75-2914.5 so it was a very successful week setting up for the 2975/3000 targets ahead.

The main takeaway is that the Wednesday June 26th feedback loop/double bottom confirmed itself and it is another round of acceleration on this bull train. Bears are still in hopium mode and bulls are still buying every dip. Nothing has changed and it is what it is until the music stops.

Friday closed at 2953.75 and the bulls made it happen in the final few minutes of the month/quarter end to print the dead highs wrap up. The bulls accomplished their job and now they are being rewarded with the 2975 target being already fulfilled with the Sunday night gap up and go structure.

(Yes, we have been copying and pasting this section since the June 20th KISS report so the current price numbers may be a little off)

Given that the ES market is less than 1% away from all time highs so it’s time to talk about 3193.75. Where the heck did you derive that random number from? Well, that’s the 100% measured move target of an ongoing massive cup and handle (C&H) formation on the daily/weekly/monthly charts if you zoom out and look closely.

We’re going to be using this number as a reference on the potential range expansion in the coming months given it’s an ongoing bull train from the 2728.75 June lows. To put this in another perspective, it represents roughly +8.4% gain from the current price of 2945 as of writing.

By noticing the overall zoomed out pattern/structure of the broader market, we would be prepared if the bull train keeps extending so we don’t argue vs. the price action. This is quite important because in recent weeks, the bears got slaughtered and so the ongoing massive feedback loop squeeze remains strong and it’s best to be prepared so we milk for as long as we can manage.

Please remember the good old cliché; the market can remain irrational longer than you can remain solvent. This bull train can last a very long time until the music stops and actually breaks key support. If everyday becomes just finding the LOD or higher lows setup so be it. Why argue against what the market is telling you through price action? Just hop on and ride till the wheels fall off, then rotate into the opposing direction when bears get resurrected again by breaking supports decisively.

Clear and concise context for July:

The month of June retraced all the losses made in May so we have about a month’s worth of trapped bears/inventory and a bunch of price chasers into new highs. Given the ongoing structure of the bullish weekly/month charts, the month of July or ahead is very simple because we’re still treating one side as the winner. There are only two high probability outcomes and they will be either our standard ‘hold half and go’ upside continuation setup on the monthly charts or an immediate continuation to the upside without looking back in the rearview mirror. The key point is that any dip is an opportunity to reload longs and adjust average cost and keep milking this bull train until the music stops. When one side is dead and remains in hopium mode, then we’re just going to keep taking advantage of the winning side.

Friendly reminder, we are getting close to the 3000 major level and you already know every major 100 points or 1000 points on first try basis will be defended so make sure you know what you’re doing on short-term vs. macro targets. Also, near top of daily bollinger band highs since the bottom of BB during the start of June. Know your timeframes. 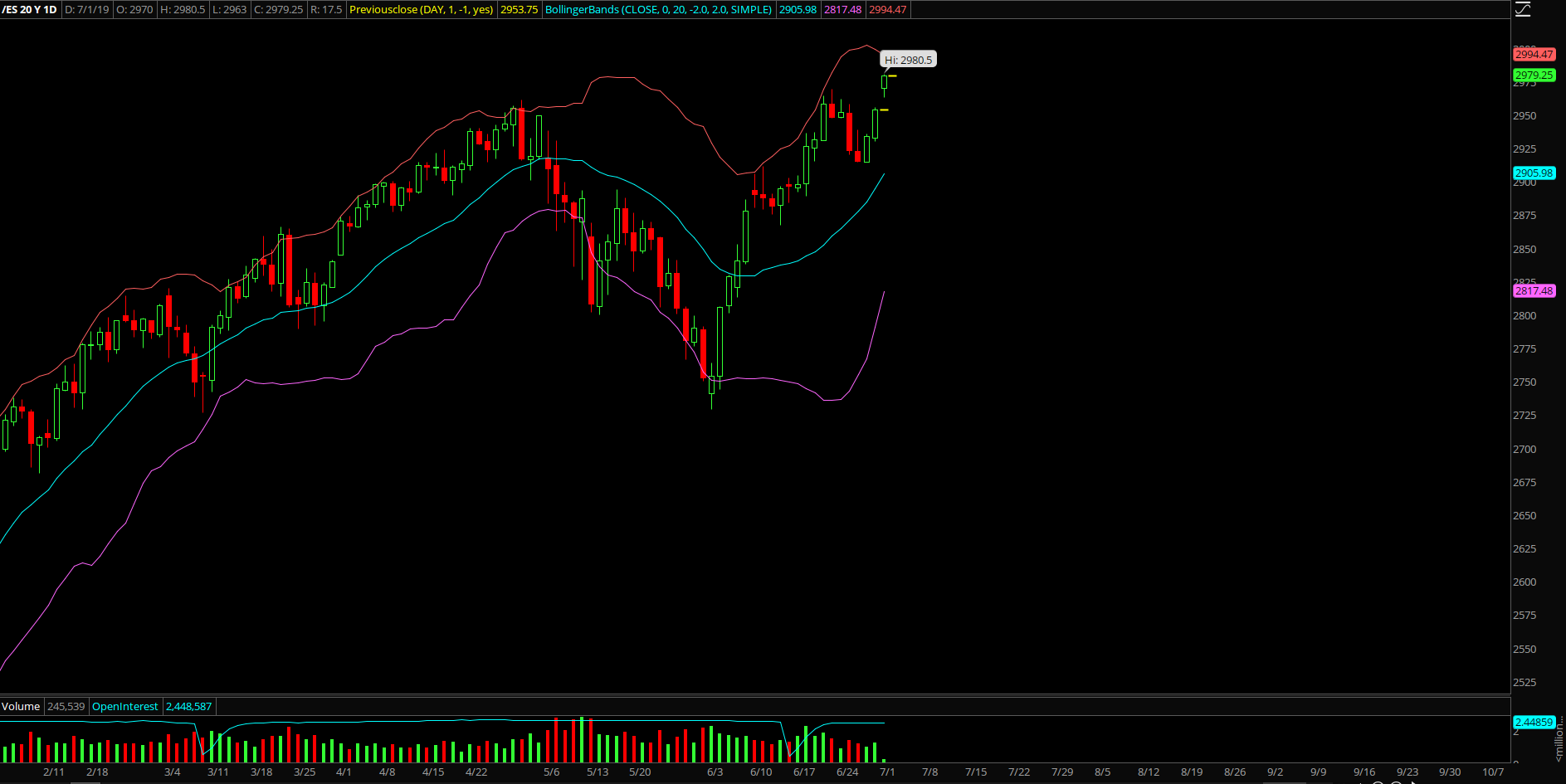 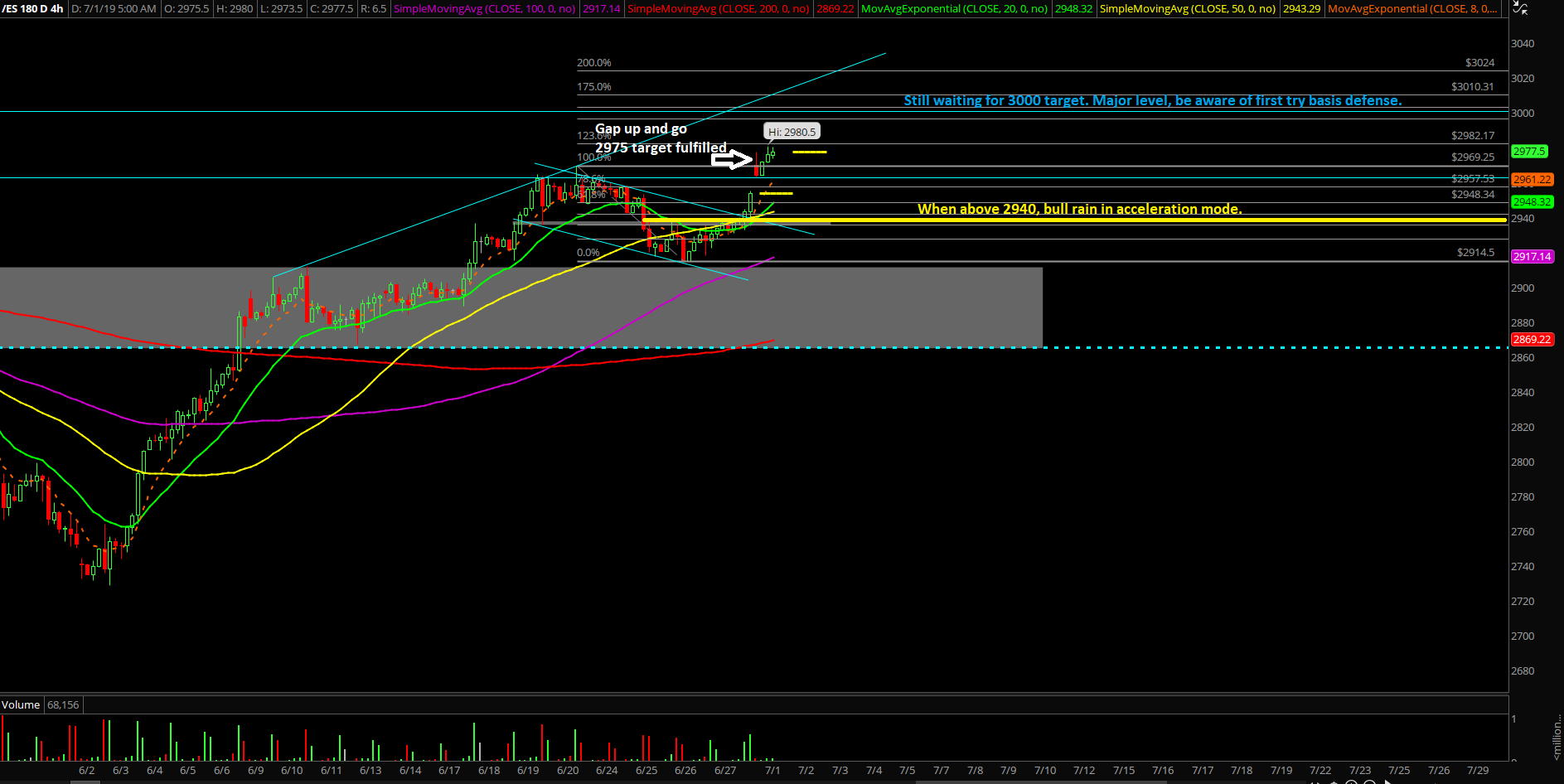 ES JUNE30REVIEW4
Ricky Wen is an analyst at ElliottWaveTrader.net, where he writes a nightly market column and hosts the ES Trade Alerts premium subscription service.