The 4th week of July was just an upside continuation week in the context of a bull train that held support at the start of the month. The week started with the bears failing to complete their downward drift towards the 2790/2774 support targets by "sticksaving" at a low of 2792.50 on Monday and then closing with a solid bullish reversal candle on the daily. This allowed the bulls the opportunity to quickly squeeze and grind higher into a weekly higher-highs breakout towards the precise Feb 2837.25 high.

The bulls did just that in an impressive and fast manner, and by mid week the S&P 500 was able to pop a little higher into our 2837-2855 key resistance box. This was where our proprietary signals and price action along with the  4-hour white line projection setup were aligning at the same spot, stalking for an attractive countertrend setup, which was very similar to the prior week’s July 18 temporary top setup that occurred at 2818.

The market did just that with a pop to the 2849.50 high and then subsequently gapped down a bit at 6 pm on Wednesday night due to the FB tankage. The rest of the week was spent formulating the lower highs following our 4-hour white line projection. The bulls failed to break back above 2848-2850 on two subsequent attempts since the 2849.50 Wednesday high, so it was the opposing side’s turn to pounce.

The bears re-took control of the train under 2831 on Friday morning, and it was pretty much all over the the immediate bulls. Another proprietary signal of ours was calling ‘HOD is in’ around 10:15 am EST, and if bears were able to go sub 2831 then it could get wild.  The bears did just that as they were finally able to follow through, and it was a trend day down towards the 2810-2800 target.  Eventually the target was fulfilled just around 1 pm lunch time.

As demonstrated in our ES trading room, the 2810-2800 target was fulfilled as the countertrend southbound train fulfilled its target and luckily we managed to exit all our shorts at the low of the day 2809 vs 2808.75. Overall, it was a fairly weird week in terms of price action even though we managed to nail the temporary top setup two weeks in a row. There just wasn’t much conviction to be had as we missed the entirety of early week’s bull train due to taking profits on shorts.This meant we needed to wait for a good setup in order to pounce again. The main takeaway from this week is that bulls made a higher high weekly breakout and are now in a phase of back-testing the support, which should be another ‘buy the f* dip’ opportunity if daily supports hold.

Friday closed at 2817.25 and obviously price is still sporting a daily 8/20 ema bull train in terms of momentum. Heading into this week and month end, we have immediate daily trending supports at 2792 and 2800, so this is a quite strong area to view its reaction in terms of price momentum.

We’re currently expecting that the same old buy the dip crowd is likely to make its return in this area and we’re treating this as a standard backtest. However, if it doesn’t then you know something is wrong and the bears are for real. (For reference, the 4th week’s low was 2792.5 and the 3rd week’s low was 2789.75.) If the aforementioned supports get decisively broken, it would open up a potential downside acceleration towards 2774 and 2766.

For now, the new 4-hour protection chart  showcased below is our expectation heading into this week until we see more information. White line is primary, red is alternative. Like always, price is king.  Stick with a level-by-level approach as it’s been working well navigating these tough shark infested waters. 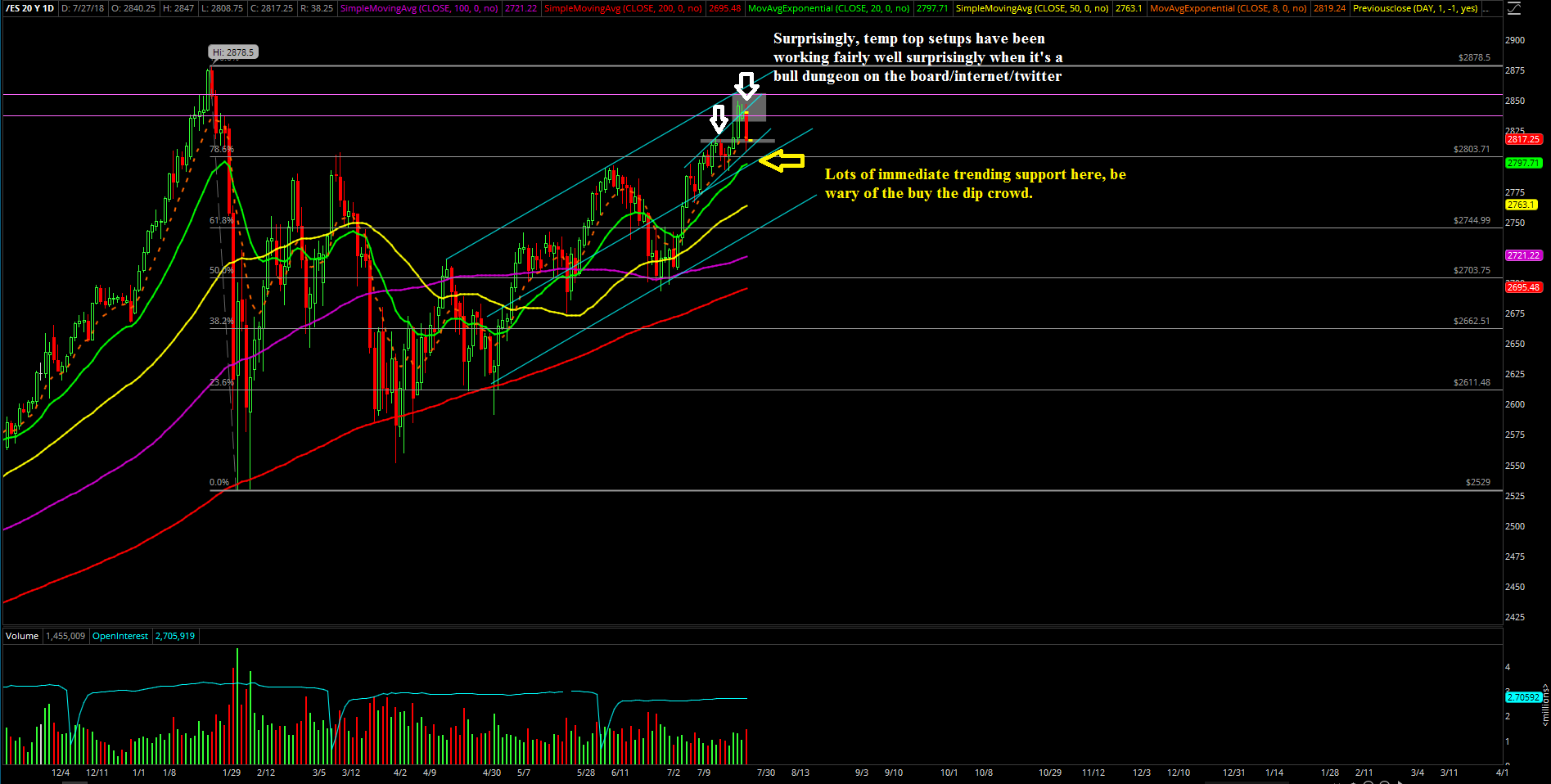 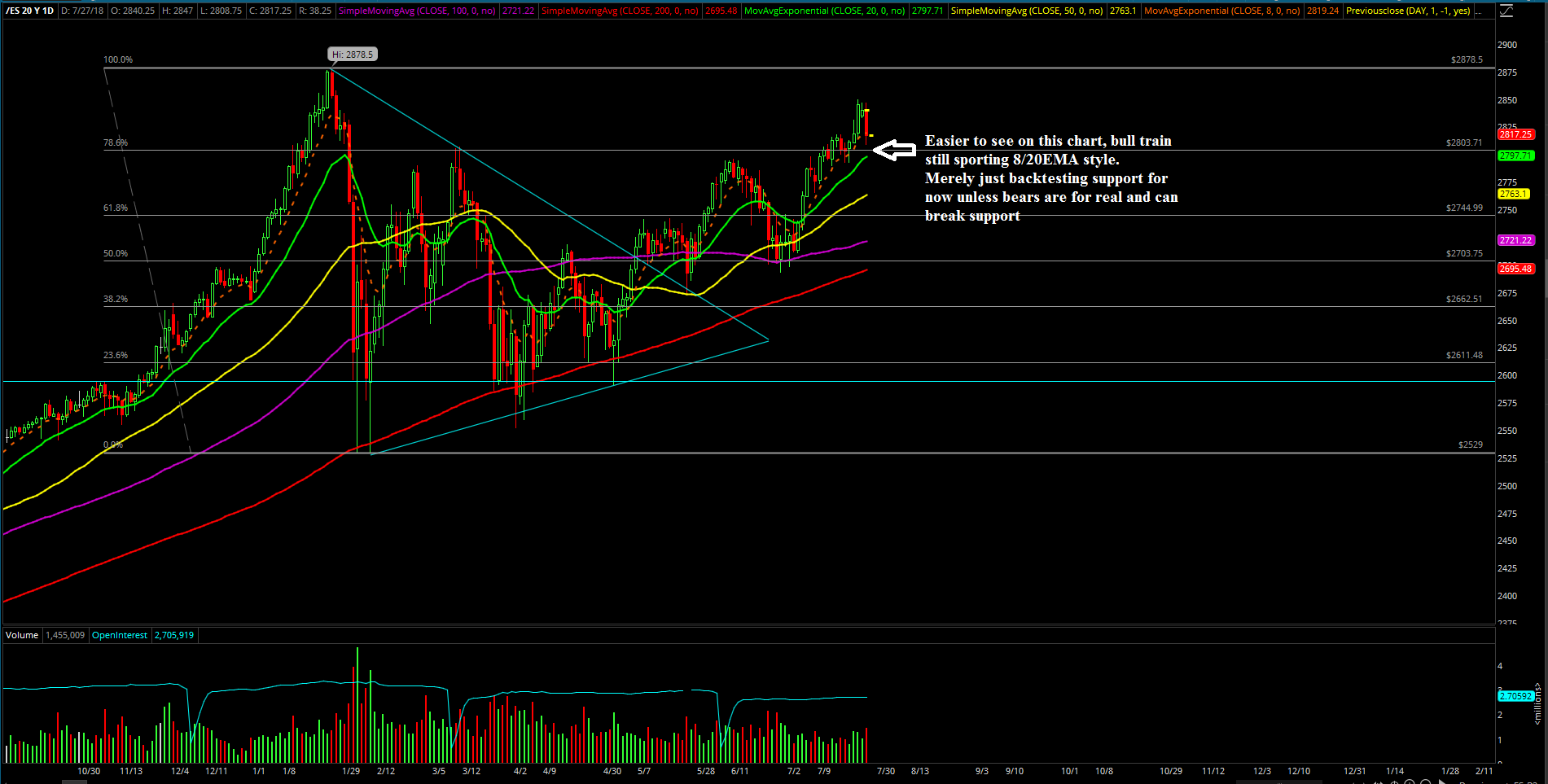 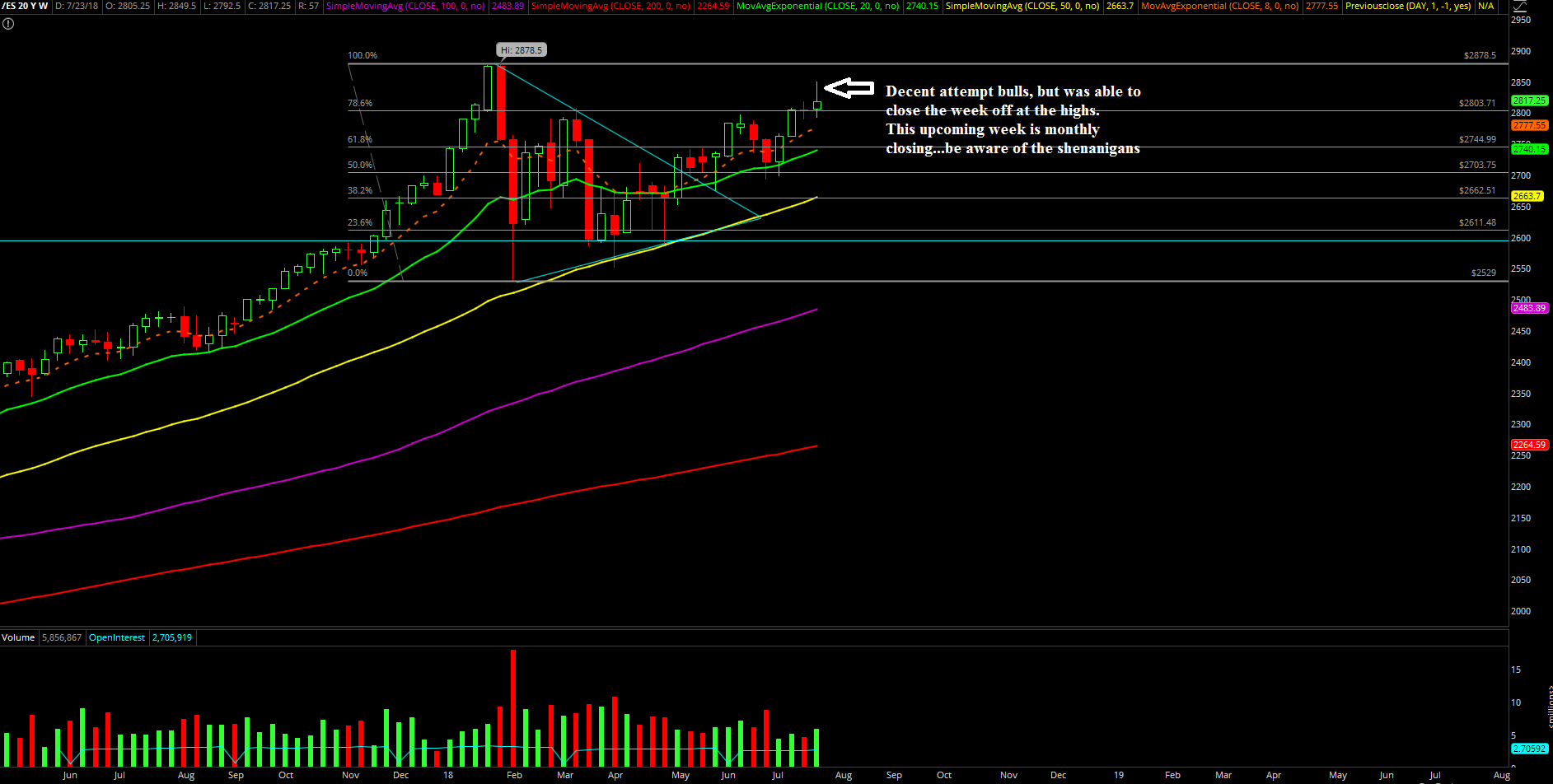 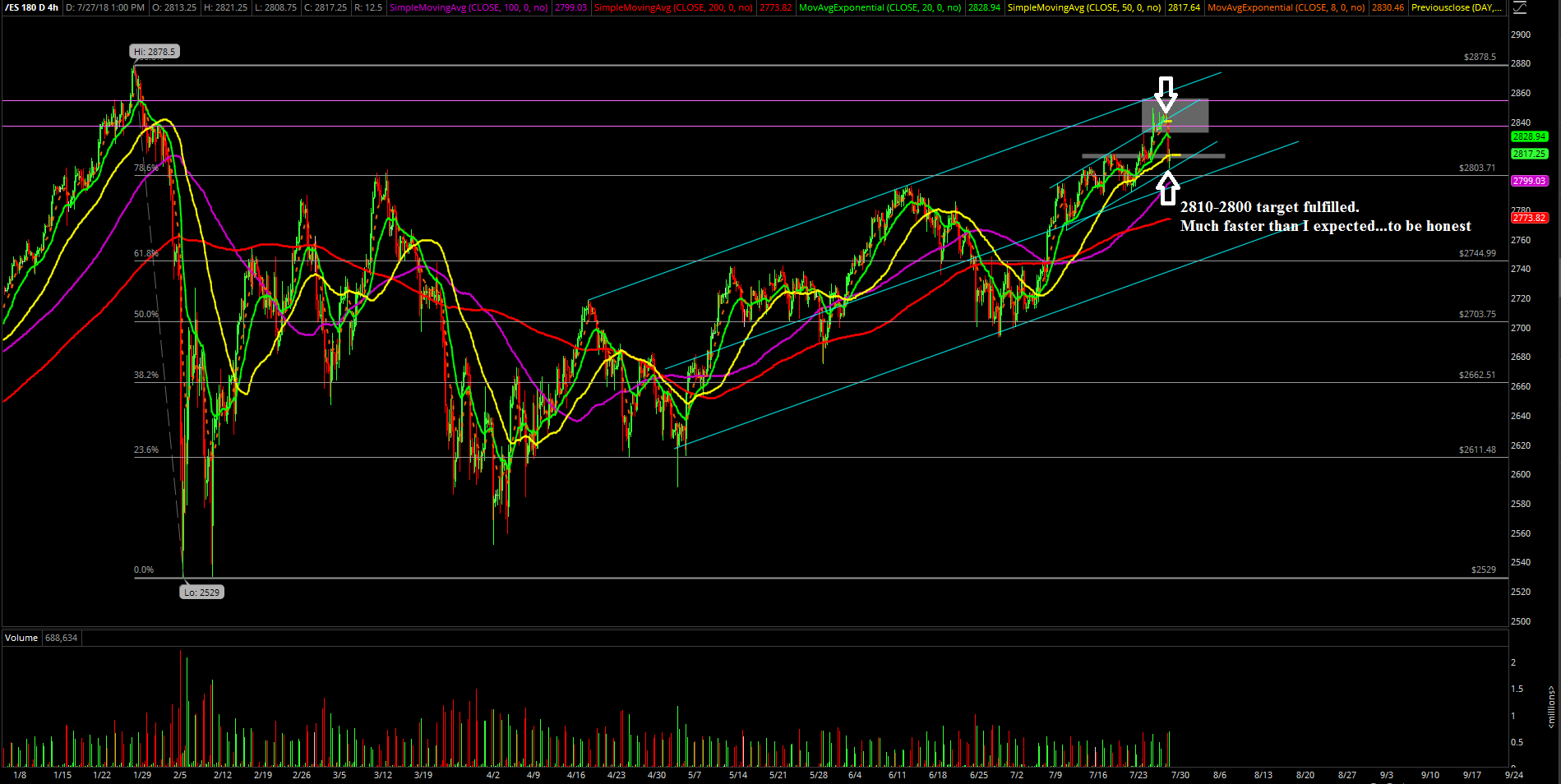 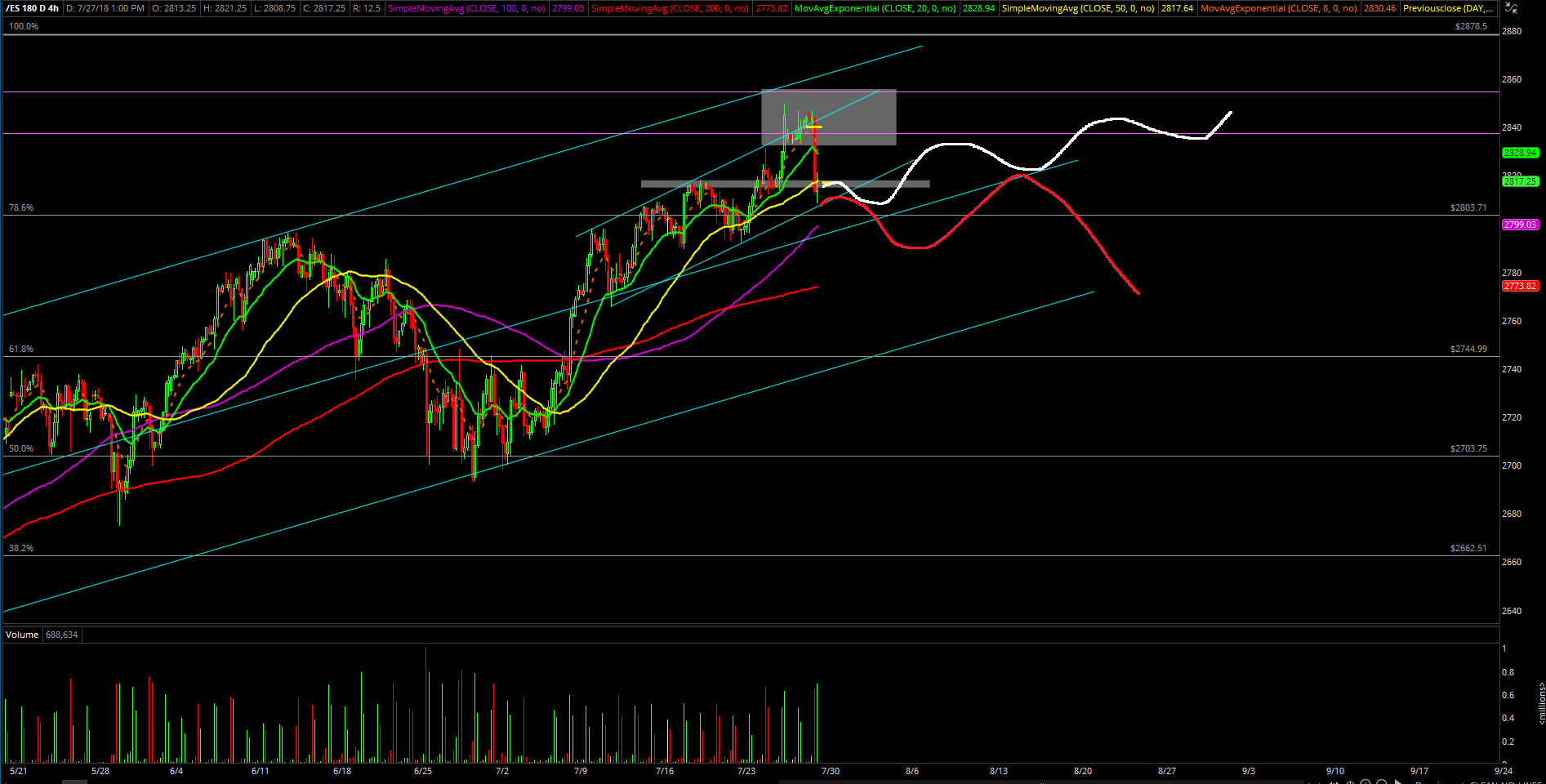 es july29review5
Ricky Wen is an analyst at ElliottWaveTrader.net, where he writes a nightly market column and hosts the ES Trade Alerts premium subscription service.