Tuesday’s session was a fairly tight range day that was overall stuck between 2785.5 and 2803.25 with the majority of the regular trading hours session hovering tightly 2794-2802 on the S&P 500. This meant that it was a digestion day that played out per one of the expectations based on Monday’s large uptrend day.

The main takeaway from this session is that the bulls were very resilient because the Emini S&P 500 (ES )couldn’t even be allowed to trade back to around 2780, which was 23.6% of yesterday’s range (2792.5-2741.75). The market bottomed at during premarket at 2785.5 and immediately formed the higher lows bottom after the 8:30AM CPI timing catalyst. Basically, the standard 1hr 20 exponential moving average trending support played out as the train consolidated for the rest of the day.

Daily closed at 2799 gaining 8.25 points vs. Monday’s EOD print. We’re treating the current pattern as a high level consolidation/bull flag on the 1hr/4hr/daily timeframes where the bull train is considered to be in full control when immediately trending above 2785 because of how resilient today has been.   We’re looking for the continuation pattern to play out into the 2820 area target or beyond. In simplest terms, when above 2785 we’re looking for immediate trend continuation towards the 2820 target.

As of writing, the Asian markets are a bit weak as they’re bit by around 1% across the board so if ES 2785 starts to break then beware the next ongoing support levels are still located at the same levels from yesterday; 2770-2776 and the must hold 2764. In simplest terms, would stop out of our existing long positions if the accelerated trending support at 2785 goes and look to re-attempt again when things look fine again.  It's almost always better to re-strike relative to the key levels based on our momentum ruleset here on an accelerated bull train.  Remember that the first stop is the cheapest because staying disciplined is the key to a long term process.

The main concern for the rest of the week that we could see right now is that the market decides to kill both sides instead. What we mean by that is that technically it is still an inside week within last week’s entire range of 2819.75-2726.5, where Monday retraced 78.6% of the losses already and the bulls are consolidating for another move higher.

If this consolidation takes much longer than we anticipate then it’s just going to whipsaw us back and forth within this overall weekly range from last week where it’s just killing both sides. This is something we need to be aware of if we get run over during the overnight/tomorrow morning and limit our risk exposure/drawdown for rest of the week by being more nimble relative to key levels only or just staying away entirely and trading easier trending setups like gold/bonds. 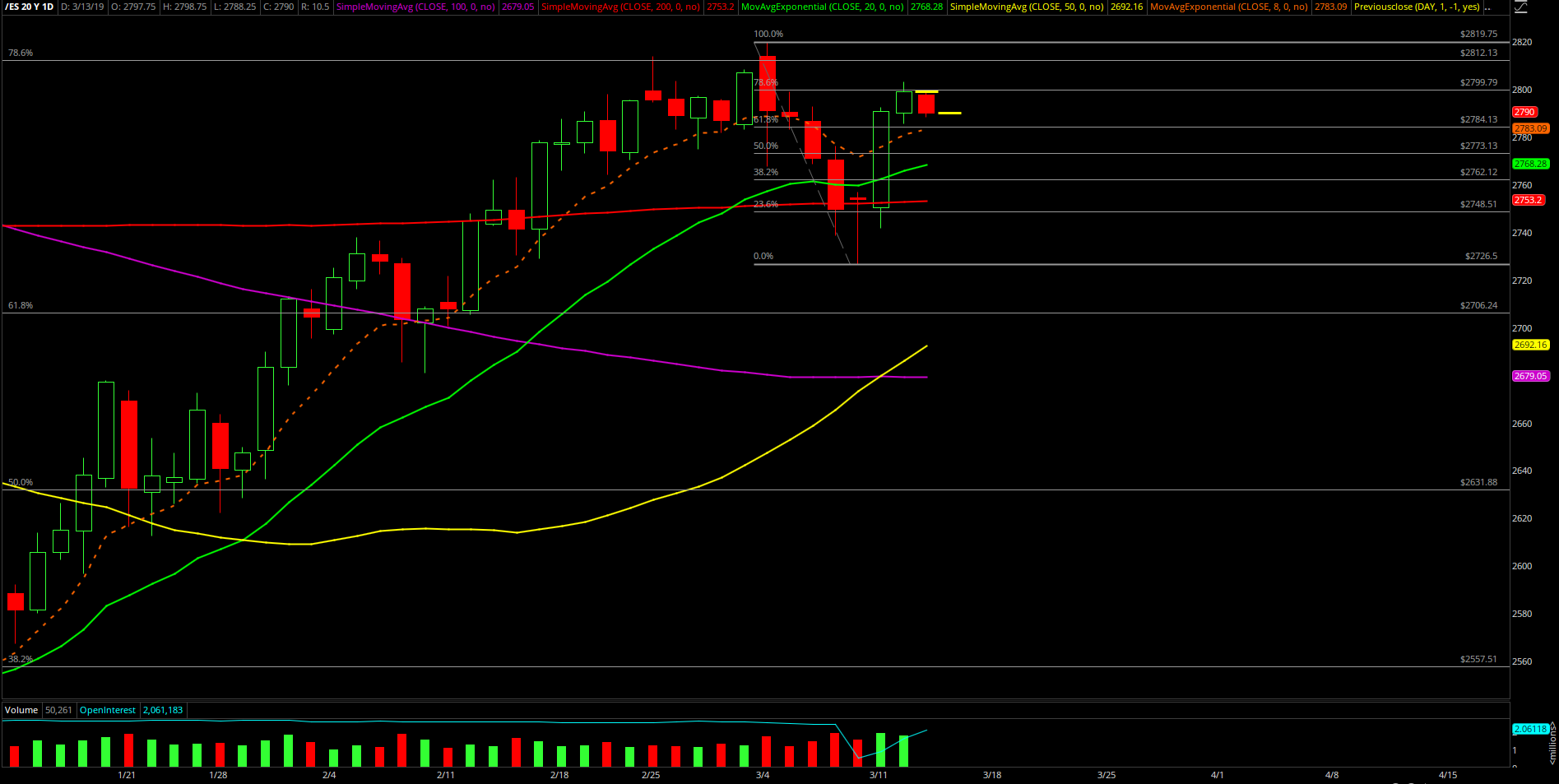 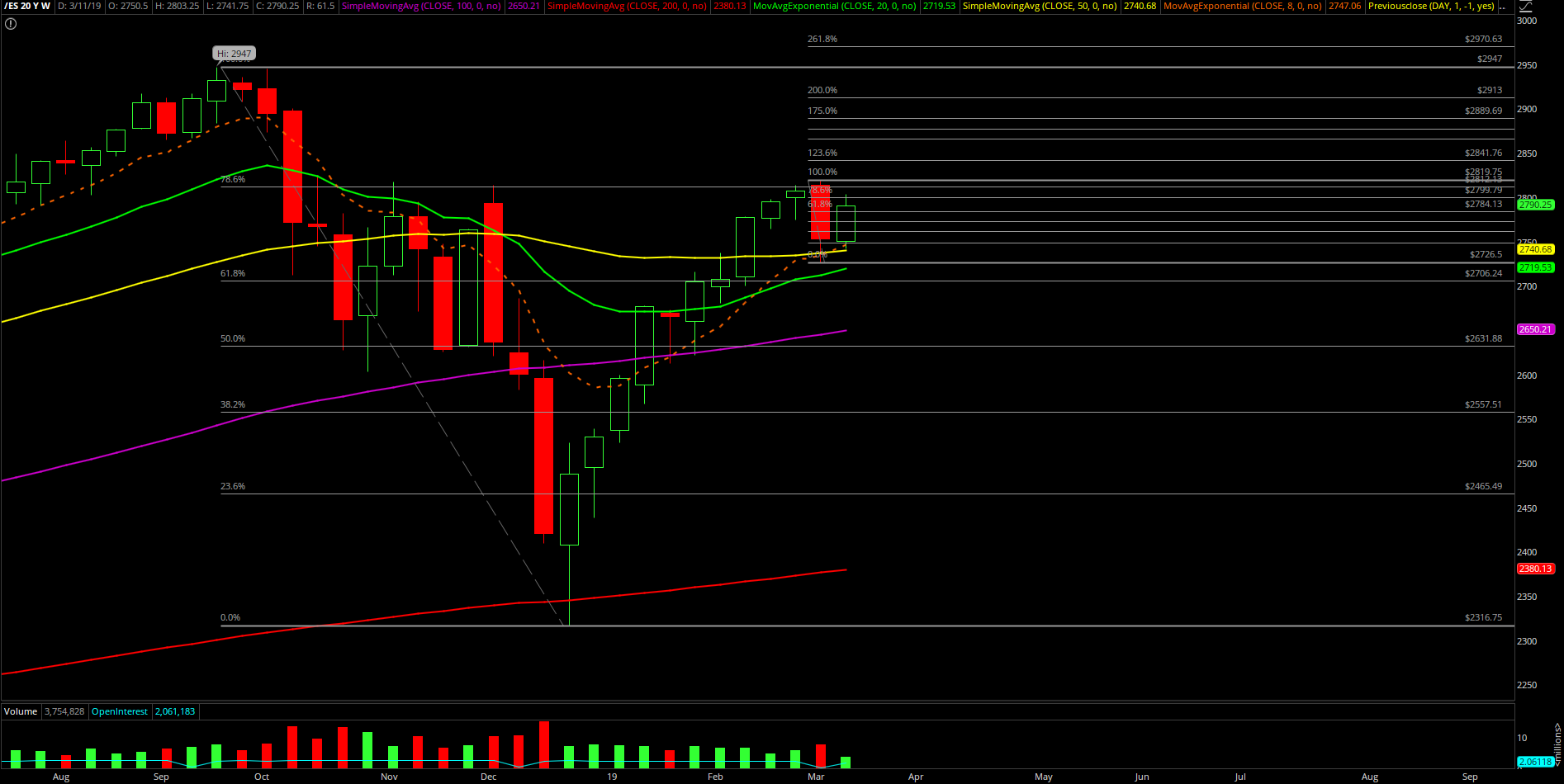 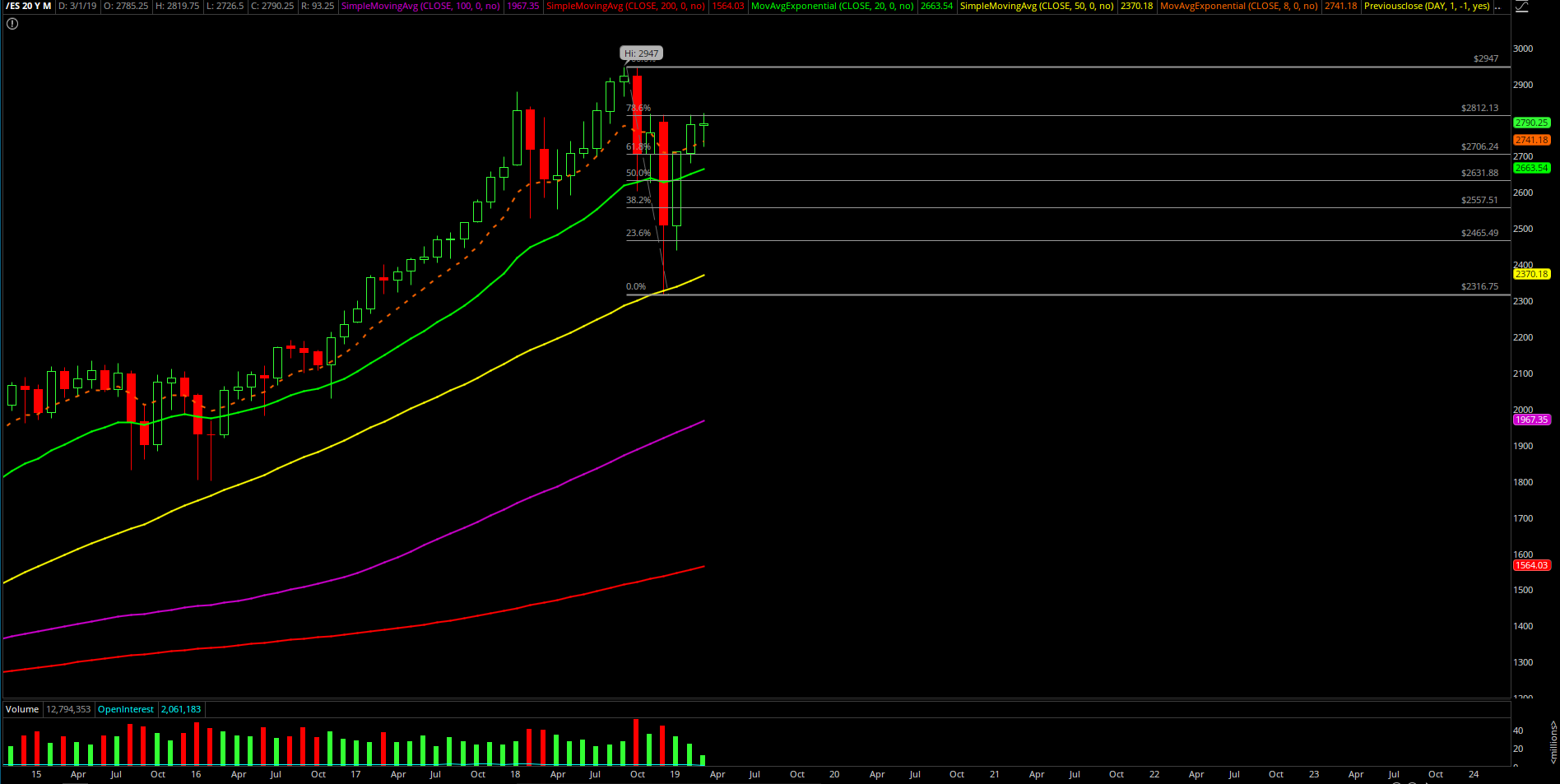 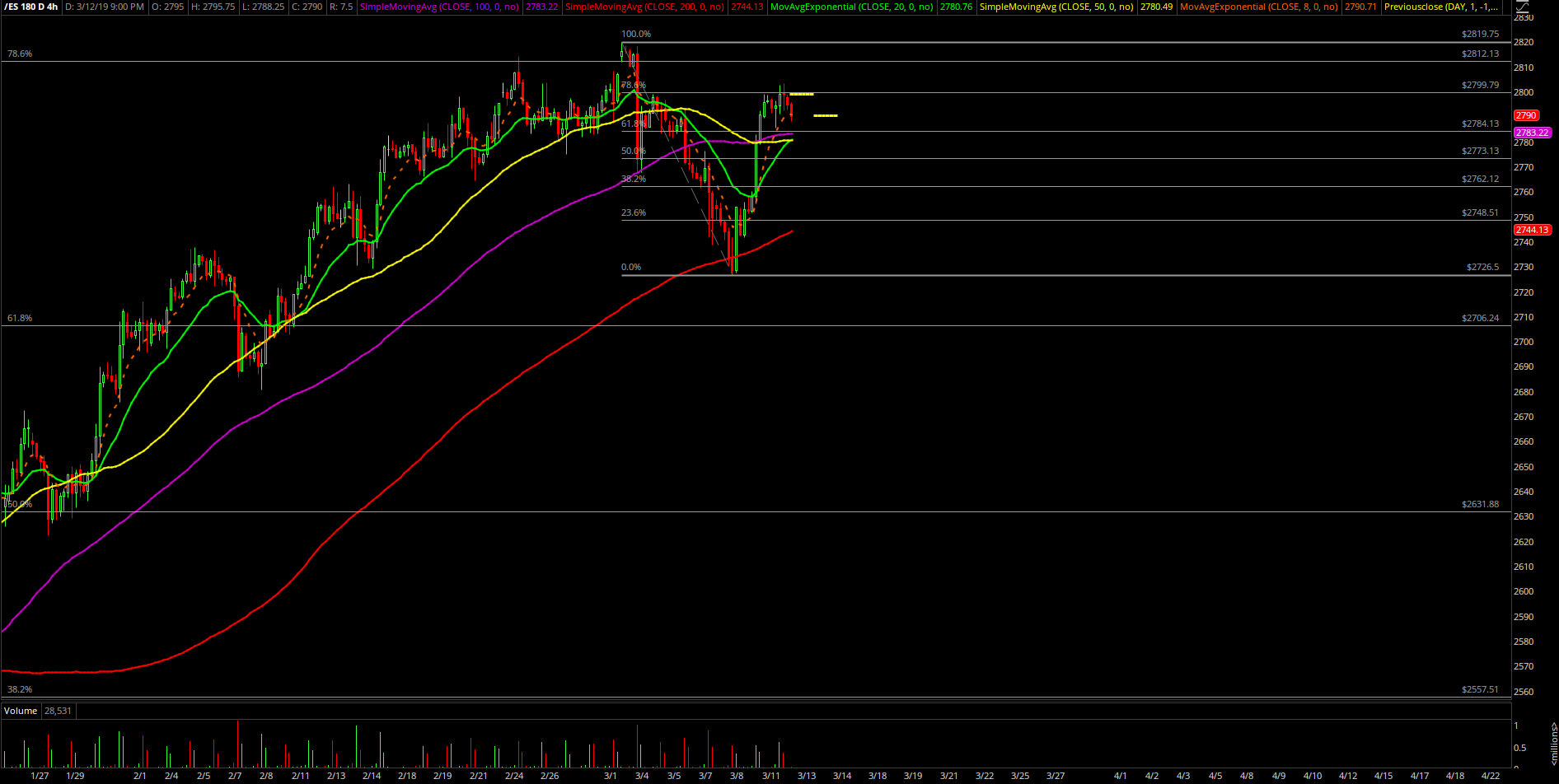 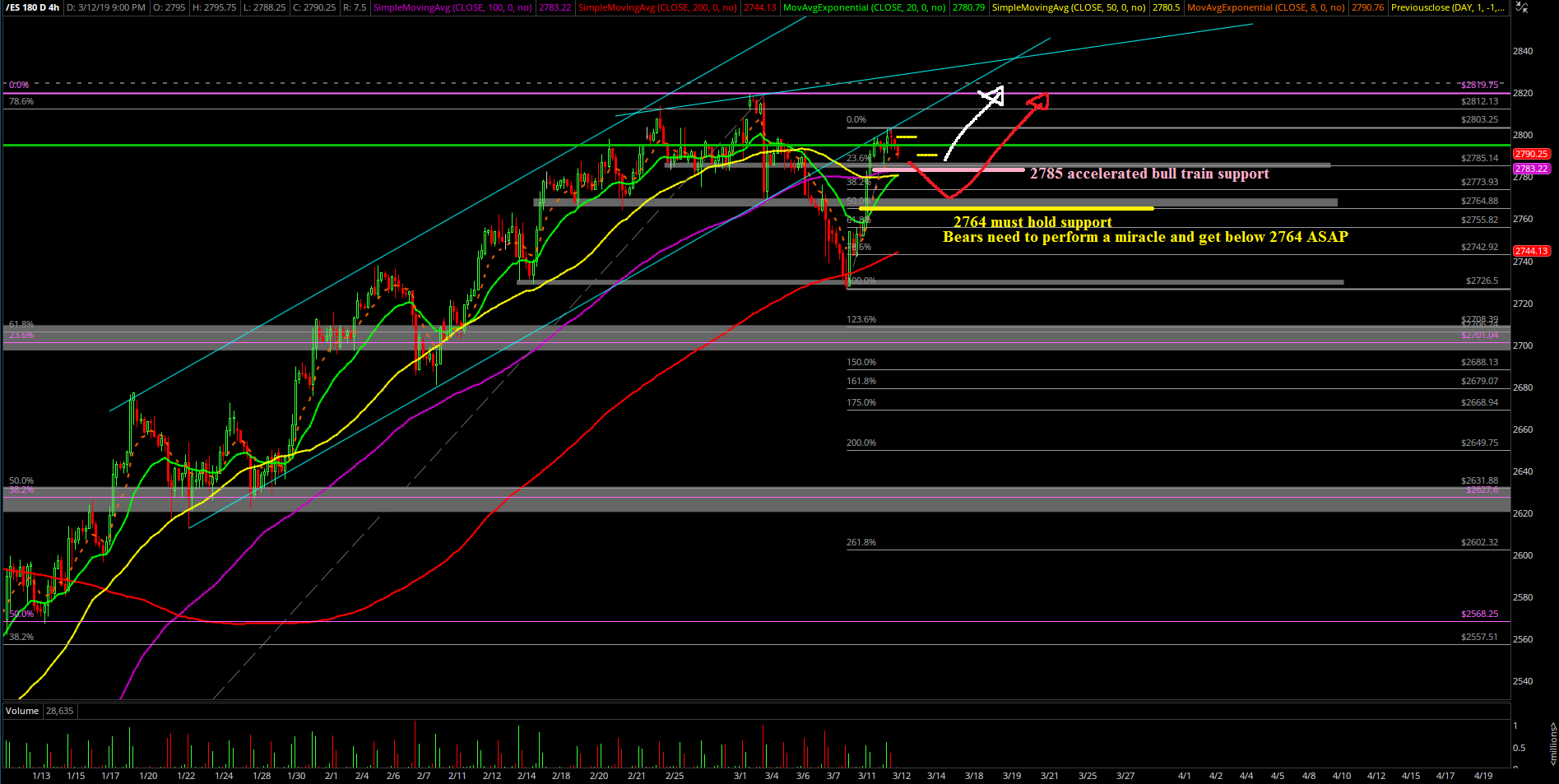 es march12review5
Ricky Wen is an analyst at ElliottWaveTrader.net, where he writes a nightly market column and hosts the ES Trade Alerts premium subscription service.