Monday’s session was yet another boring textbook range day doing our standard "hold half and go" structure in order to load up the passengers for this bull train ride into the all-time highs later this week. In simplest terms, high-level consolidation was necessary in order to trap in more market participants alongside with resetting/rotating the indicators/internals/sectors for the eventual squeeze when the market keeps consolidating against the 2915 highs here.

As demonstrated earlier in our ES trading room, we took today’s intraday dip opportunity to re-buy the longs we sold at Friday highs for a bargain. You know the same old BTFD strategy until the market stops gifting us the setups. Rinse and repeat until the market stops printing money and forces an actual change by breaking at least the first support. If it ain’t broke, don’t fix it…yada yada.

The action started with Sunday night formulating a tight high-level consolidation around 2910-2914, and then price action made the eventual dip back into backtesting key support during RTH. The LOD was 2900.5 that held against our trusty 2900 immediate trending support level. Basically, the market just followed the same script from last Thursday; 2885.25 low vs. 2885 must hold immediate trending support. Bears got taken to the cleaners again. The main takeaway from this session is that the bull train remains in full control. Bears tried to break below 2900 key support today, but failed once again so it’s time for the stampede to continue. Déjà vu all over again.

Daily closed at 2910.5 as a doji inside day as price action remains unchanged from Friday. The bull train is within an acceleration phase since the 2885 feedback loop squeeze/sticksave setup from last week so the estimated time of arrival to 2947 ATH station is this Wednesday-Thursday if momentum is working perfectly. If not, then be aware of potential derail and manage risk exposure properly like we are aggressively doing as we inch closer and closer.In addition, the train will confirm it is accelerating immediately again if it breaks 2915 so overnight traders should watch out for that if so as Europe opens. Also, nothing has changed in our perspective so we must repeat the main points below.

For now, the 4hr white line projection from last week remains king when above 2900 as the immediate micro trending support have moved up. The bull train is currently styling the 1hr 20ema grind up and doing a flagging pattern in order to ramp up again. Basically, the 2915 target was fulfilled on Friday and now the train is waiting for the digestion and then the next ramp towards 2947 ATH. We will be aggressively managing our risk exposure across the board as the train inches closer and closer to ATH while it holds our immediate trending support levels.

Zooming out a little, for the foreseeable future, we will be utilizing Friday’s overall low of 2890.75 and the 2885 level as must hold levels on the daily chart. Breaking these levels would open up to backtest the daily 20EMA that is hovering around 2865 per current calculations as it keeps grinding up.

Clear and concise context for April:

Treat as daily 8/20EMA bull train, but in more of an immediate bullish state because the market/momentum is back in a grind up/breakout acceleration phase. During the last week of March, the bears failed the March 22ndcontinuation downside setup on breaking below the daily 20EMA as expected so now they are getting squeezed and clobbered up. There were a lot of stops just above the March highs across the indices and the first week of April killed those quickly with the grind up continuation.

For reference, the ES market is less than 2% away from ATH so it’s an obvious goal now for the ongoing bull train and vice versa for bears to reject. Bigger picture wise, ride this train until the wheels fall off. On a weekly basis level, the 2844 low is considered the must hold weekly trending support level going forward where any dip is considered an opportunity to BTFD. I'm afraid it's rinse and repeat until free lunch money setups get taken away when the music stops. 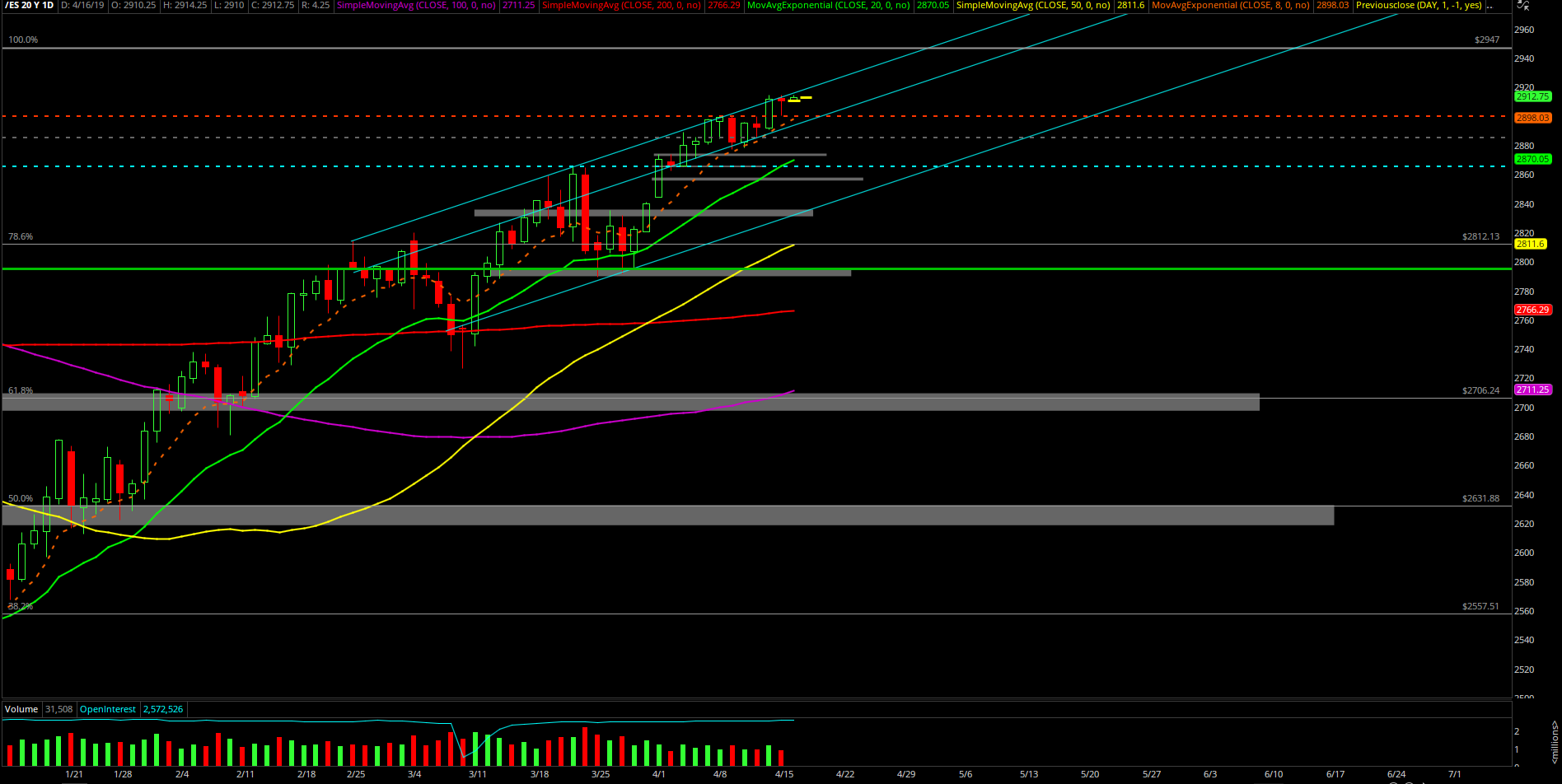 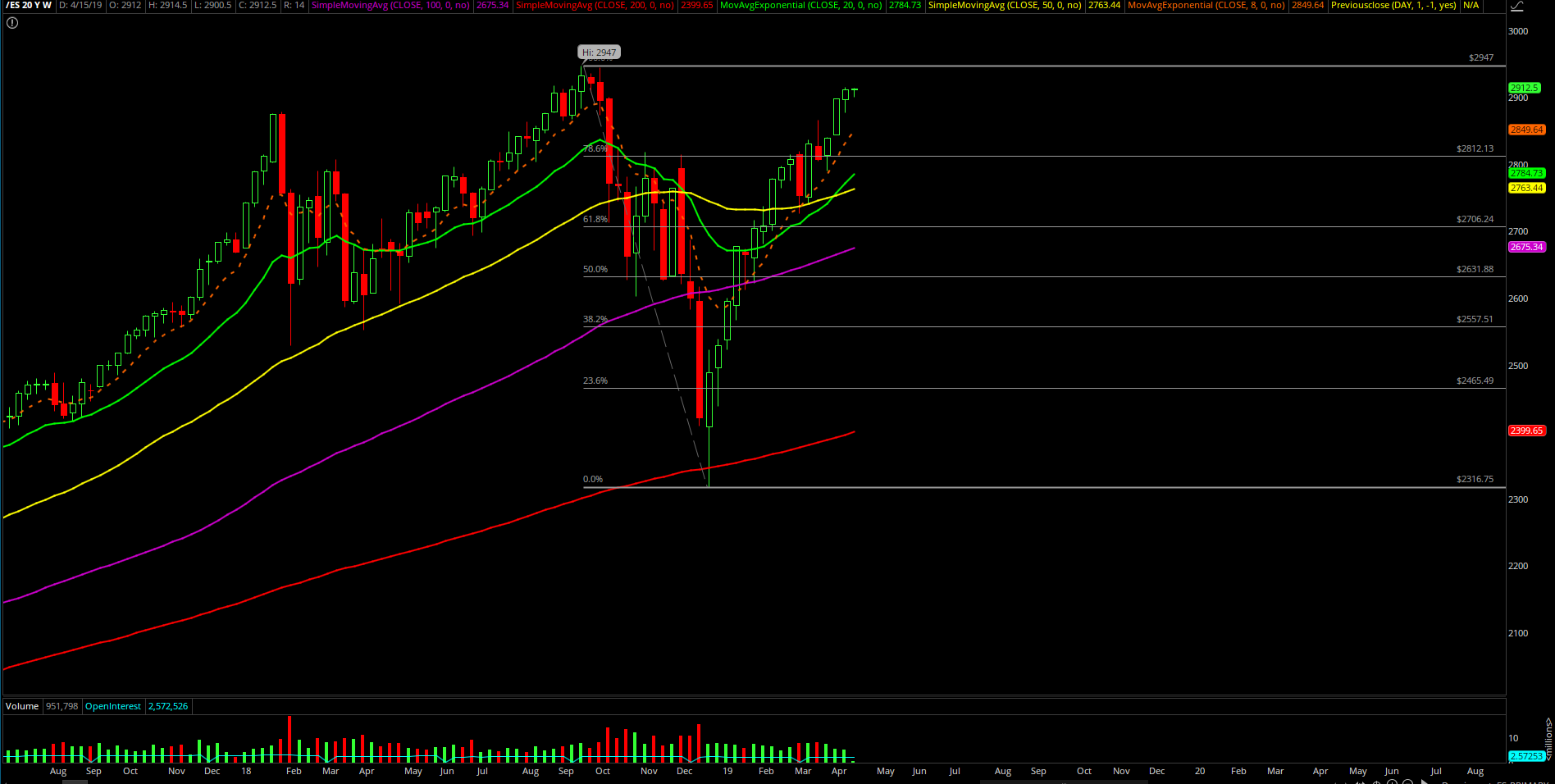 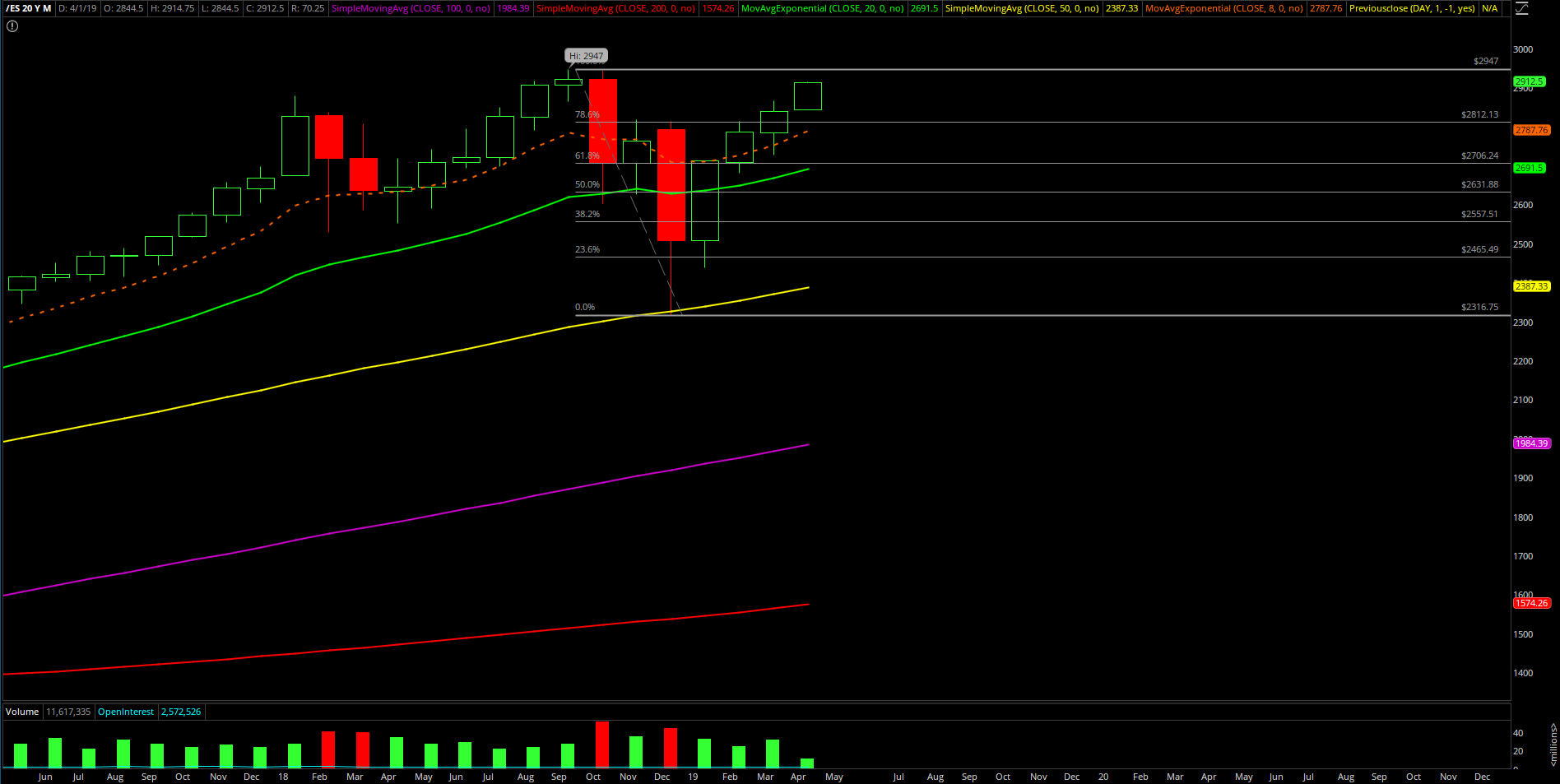 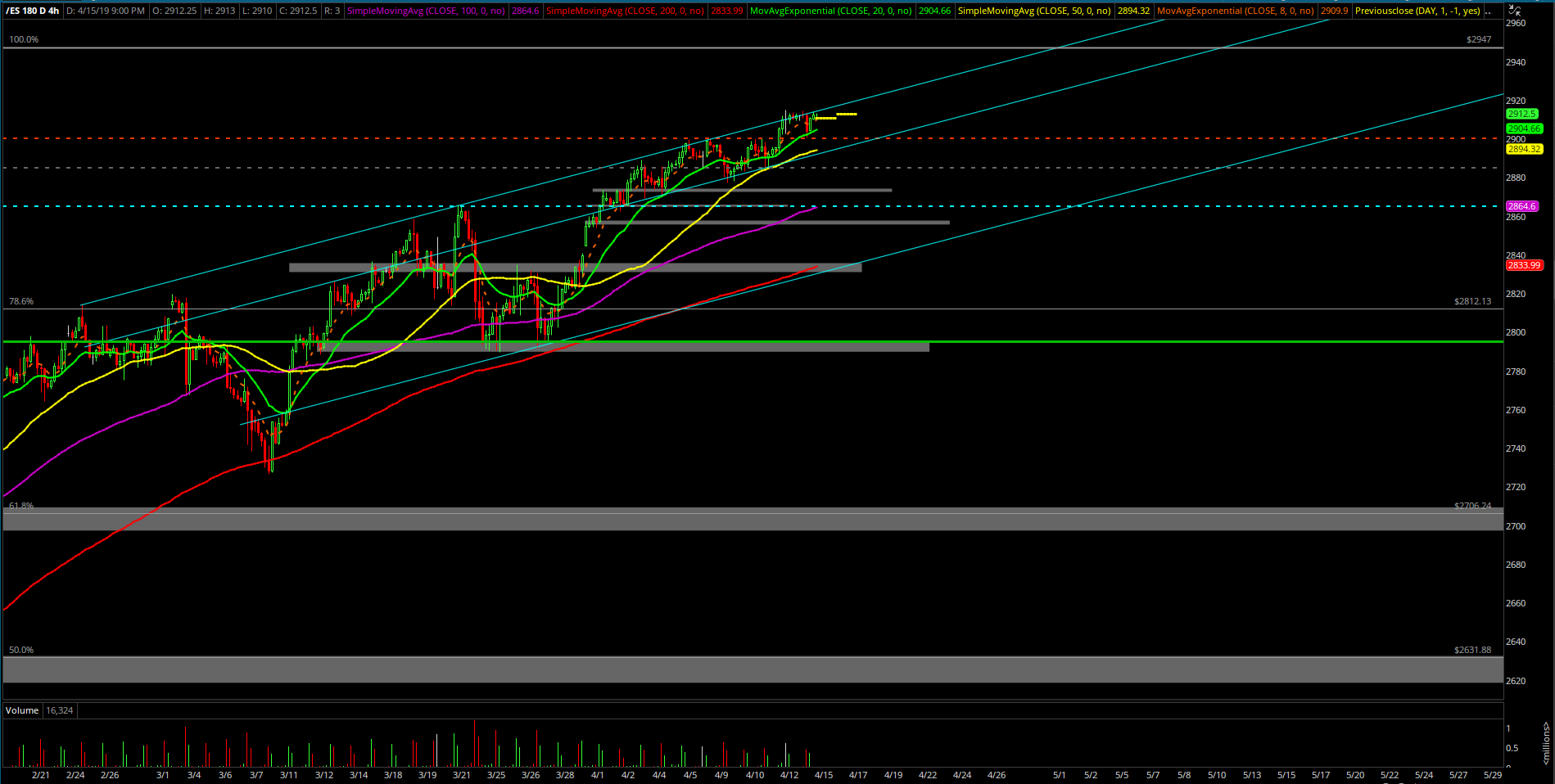 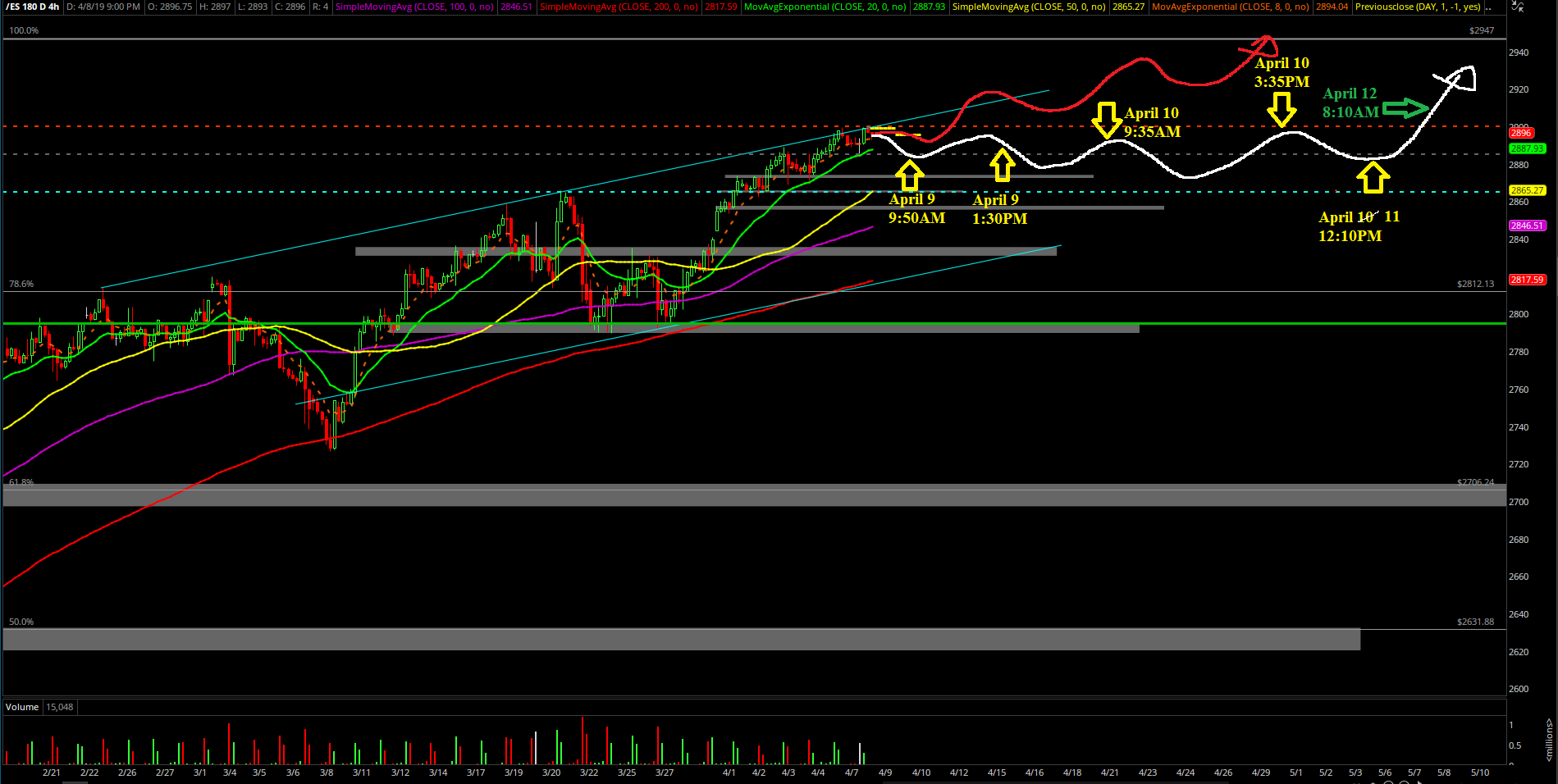 es april15review5_same4hr_pro
Ricky Wen is an analyst at ElliottWaveTrader.net, where he writes a nightly market column and hosts the ES Trade Alerts premium subscription service.