The Aug 6 week’s action could be summed up as a typical horizontal range-bound consolidation as the bull train took a breather since the beginning of July’s acceleration to the upside.

The Emini S&P 500 (ES) did not have enough juice/power to go through the 2862-2865 minor resistance from our calculations with 2878.5 being the major and all-time high level. Also, the downside was fairly limited given the bull train doing a methodical pullback and backtest against the trending daily ema support.

Overall, not much significant has changed this week in order to change the chart’s higher timeframes goal on the quest towards the new highs of the year. The main takeaway from the week was that low daily volume sessions are seemingly the norm heading into the rest of August. And if it weren't for Friday’s session to prop up the average, then the week wouldn't hvae broken the 4 million print on ES contracts traded. Regardless, it was still the lowest volume traded week of the year thus far.

Friday closed at 2839.25 and the market was able to test against the lower end of the 2825/2835 support zone heading into the session with a intraday low of 2826. If you recall, the 2825 level represents the key daily trending 20 exponential moving average that the bull train has been sporting for quite some time now.

Heading into the new week, it’s fairly simple on how we’re judging momentum.  For now, when price is above 2825, treat this as yet another "stick-save" ramp up opportunity for bulls to re-buy their long positions at a cheaper price. Below 2825, this opens up the potential for the next major support at 2800, and the immediate bull train is put into jeopardy as it cannot hold the typical daily 8/20 ema trend in terms of momentum acceleration.

In conclusion: We’re expecting a stick-save here back to at least 2850 and eventually see attempts back into the 2878.5 ATH from earlier this week. Current thesis/projection only holds true when above trending support, and traders should be aware of the great risk versus reward potential here if so. This is obviously a key spot for adaption if it doesn't go as planned.

In simplest terms, we’re sticking with the new 4-hour white line projection from last Friday’s calculations. Please stay nimble and cautious; it’s August trading month folks, and typically it’s just a bunch of "shake-fests" based on our experiences, so personally just going for quick rides in and out. 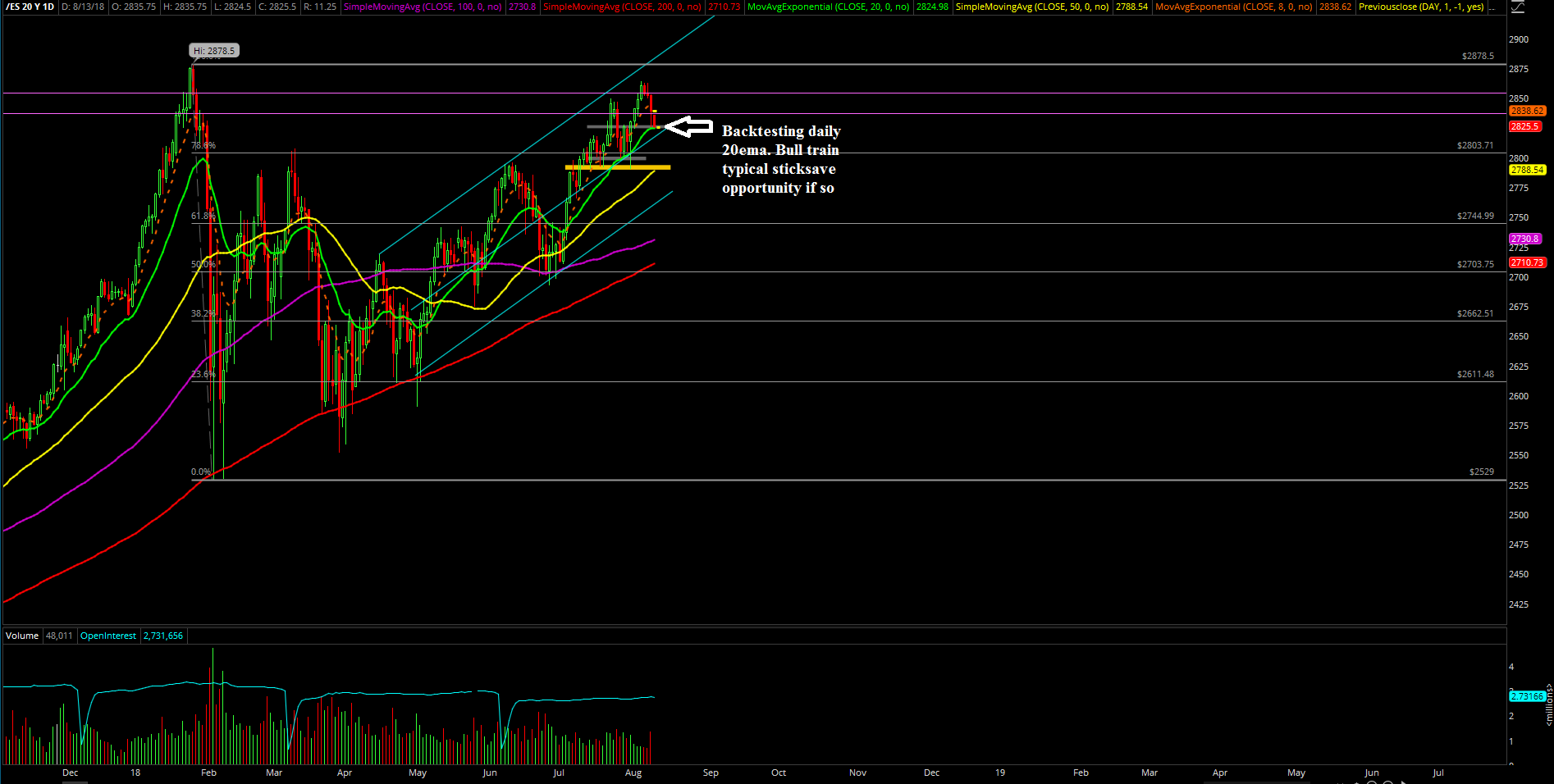 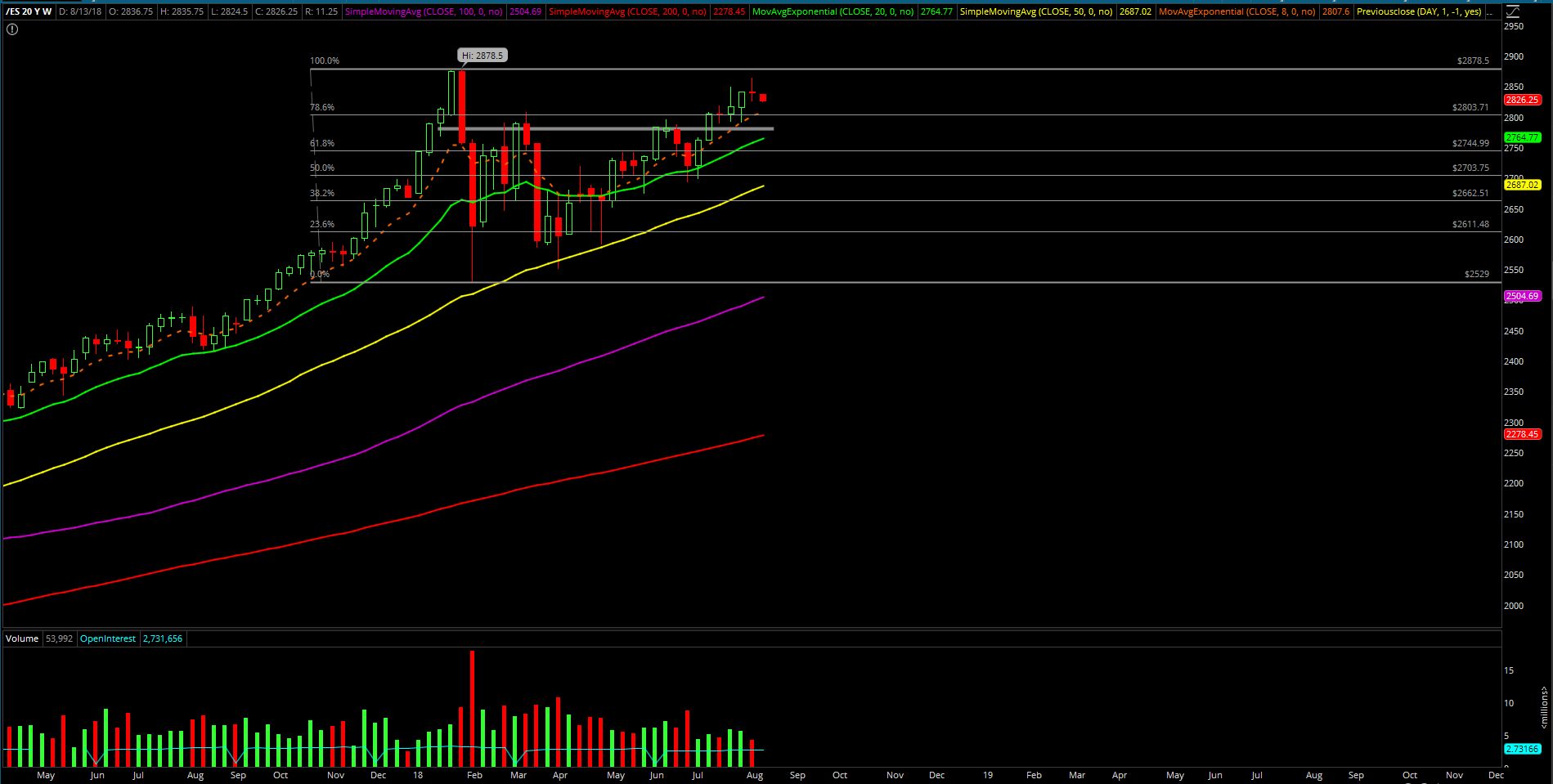 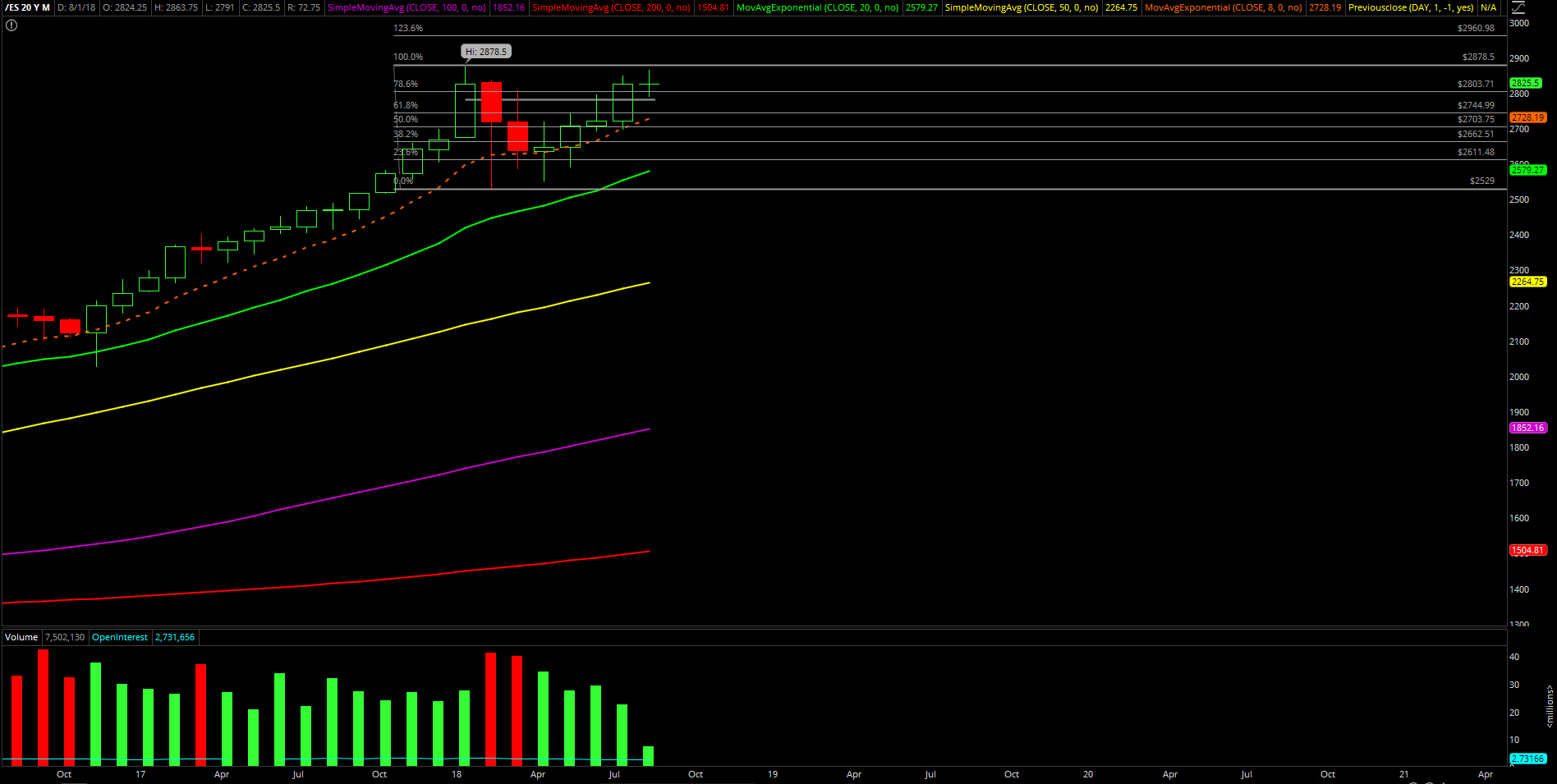 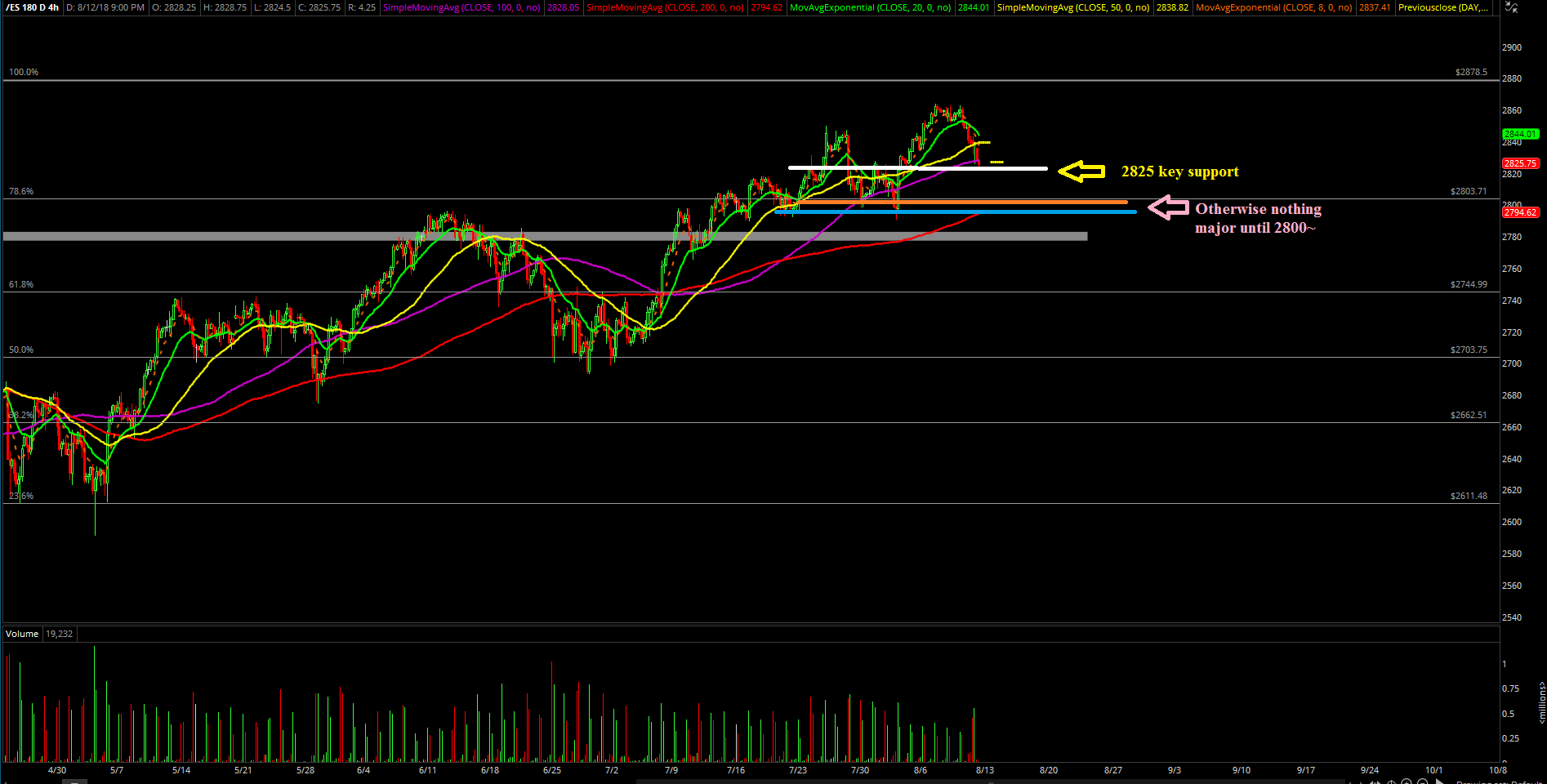 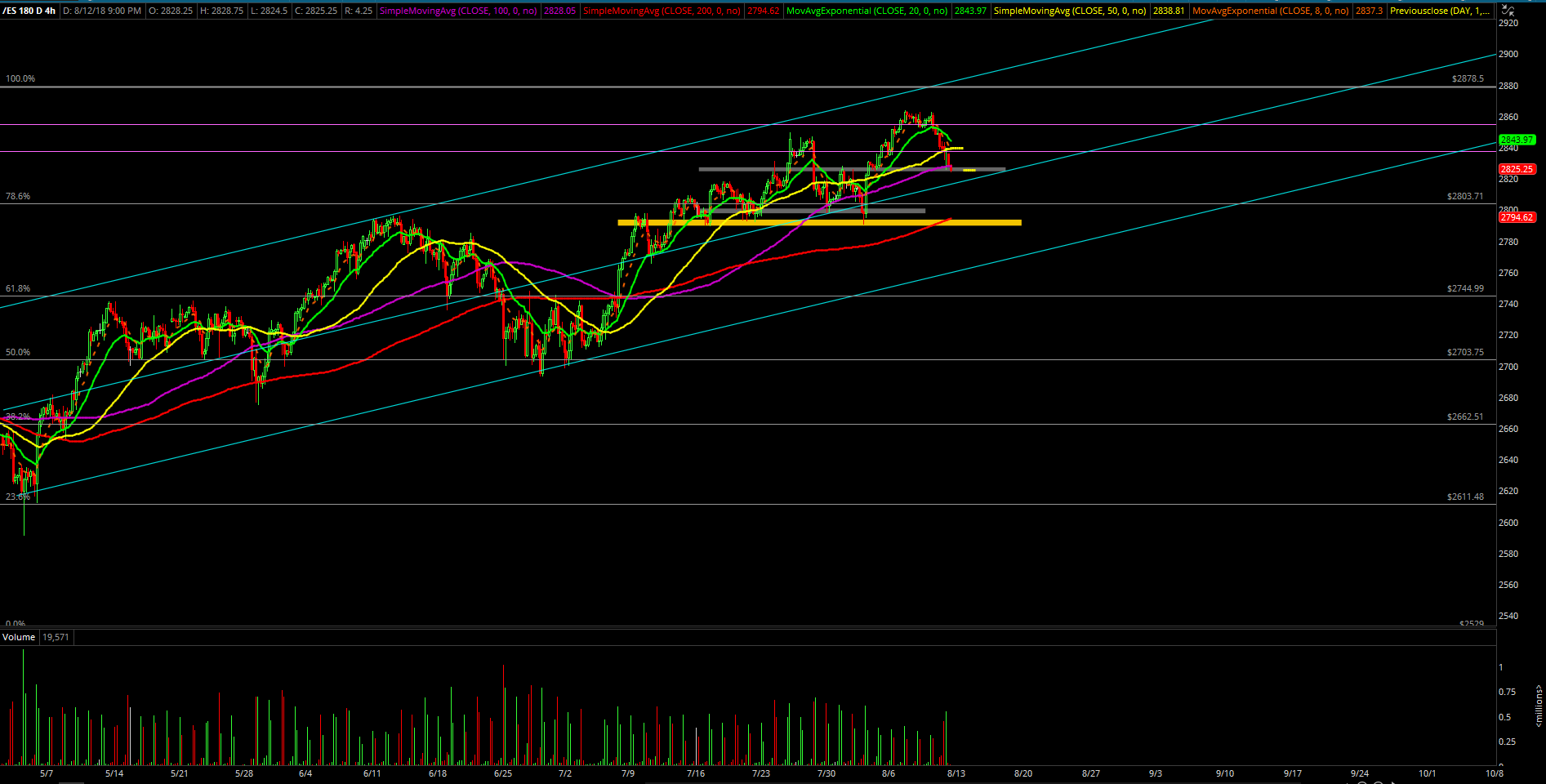 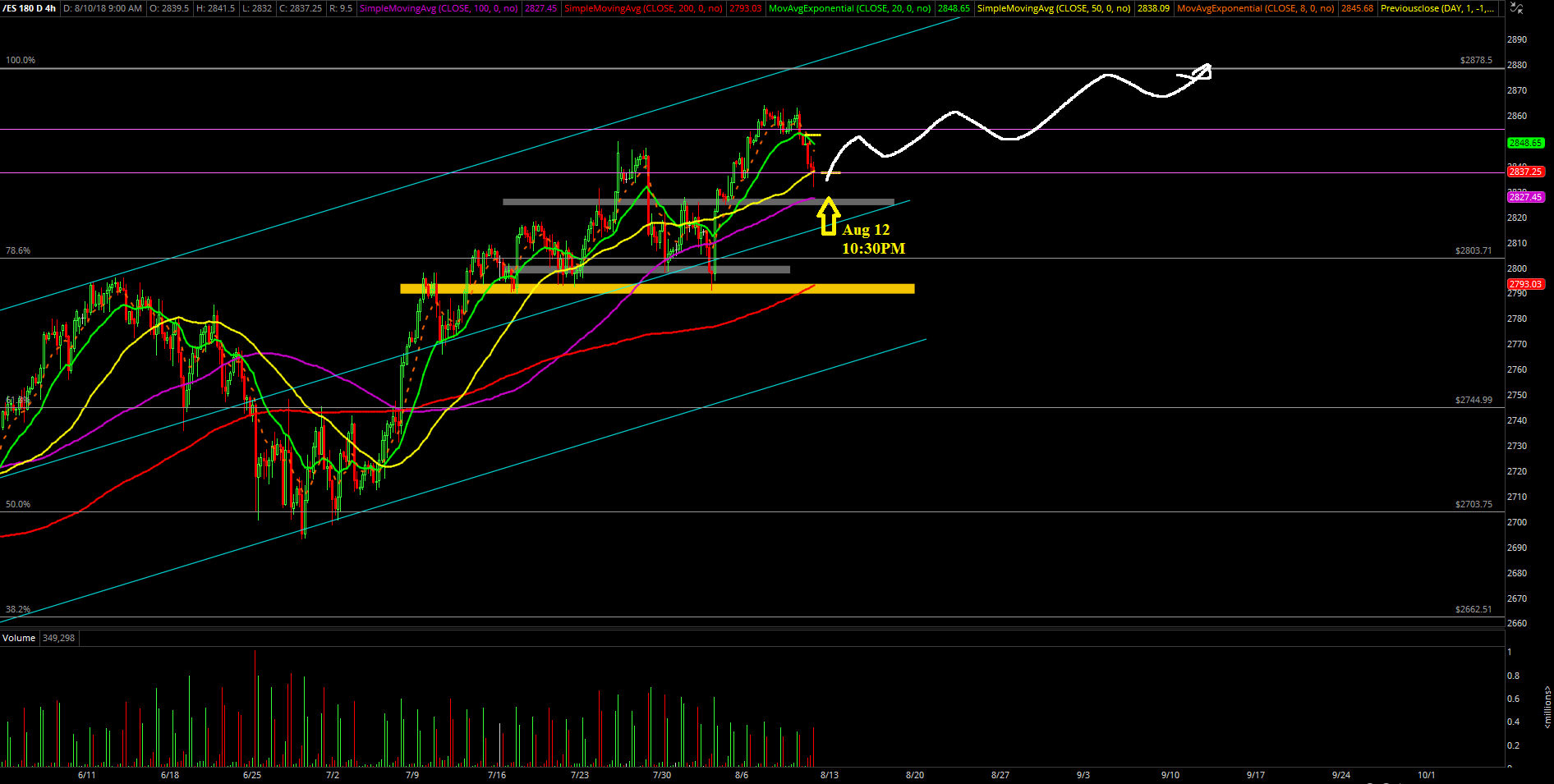 es aug12review6_4hr_pro
Ricky Wen is an analyst at ElliottWaveTrader.net, where he writes a nightly market column and hosts the ES Trade Alerts premium subscription service.