Last week’s action was pretty much just an inside week shake-fest that we warned about in the prior weekend report.  The market moved a little bit to the downside before catching a bid above our 2680 major support on the S&P 500 and established the temporary low. Essentially, the week started off Monday’s bear grind down day into the 2745-55 target support zone as expected and moved from there to complete the shake-fest.

The main takeaway from the week is that the market is heading into the U.S. Thanksgiving holiday week with a 2795.25-2671.25 weekly range with the latter number being the obvious temporary low. Now, everybody and and their mother is watching the 2745-55 zone for some upside continuation to ignite the next train ride acceleration judging by the pattern if it holds well.

Friday closed at 2742.25, which was just a hair under the trending daily 20EMA and around one of my immediate targets of 2750/2800. In simplest terms, it was just a typical range day doing a "hold half and go" setup and following our 4-hour white line projection after Thursday’s massive stick-save recovery. If you recall, this is the same old 2745-55 support zone that was the target coming into the week and now it’s obviously turned into the short-term resistance zone as price hovers below it. This means that it’s crucial for bulls to re-conquer it and bull flag higher for the continuation pattern.

Heading into this holiday week, we’re watching for the upside continuation route towards 2800 mimicking our trusty 4-hour white line projection until it invalidates. We’re also fully aware that another inside week shake-fest could be upon us if nothing decisive occurs during Monday or Tuesday’s sessions in terms of momentum. This means that expectations may need to get lowered down one notch by playing some cheap hedging bets vs. core longs when market hits 2750/2780 instead of going to full throttle to 2800 already. Wait and see how momentum develops if so.

At this point, Friday’s low of 2708 acts as the key momentum judgement level for immediate upside continuation as trending supports have moved up from prior report’s 2685-90. When above 2708, we’re looking for both 2750/2800 to be fulfilled within the next two weeks by latest schedule and earliest within 5 sessions. In simplest terms, 4hr white line remains king until it invalidates. Either way, traders should be on a decent free train ride now with some of our guaranteed profits after seeing Thursday’s temporary bottom sticksave with the buy buy buy orders.

Below 2708 opens up a can of worms with lower lows grind down potential vs. the temporary low of 2671 become very real. In that scenario, it would be considered a daily 20EMA rejection pattern once again if that occurs and the majors of 2680/2650/2603 immediately come back to mind. That would be the 2795.25-2671.25 inside week range until it isn’t. 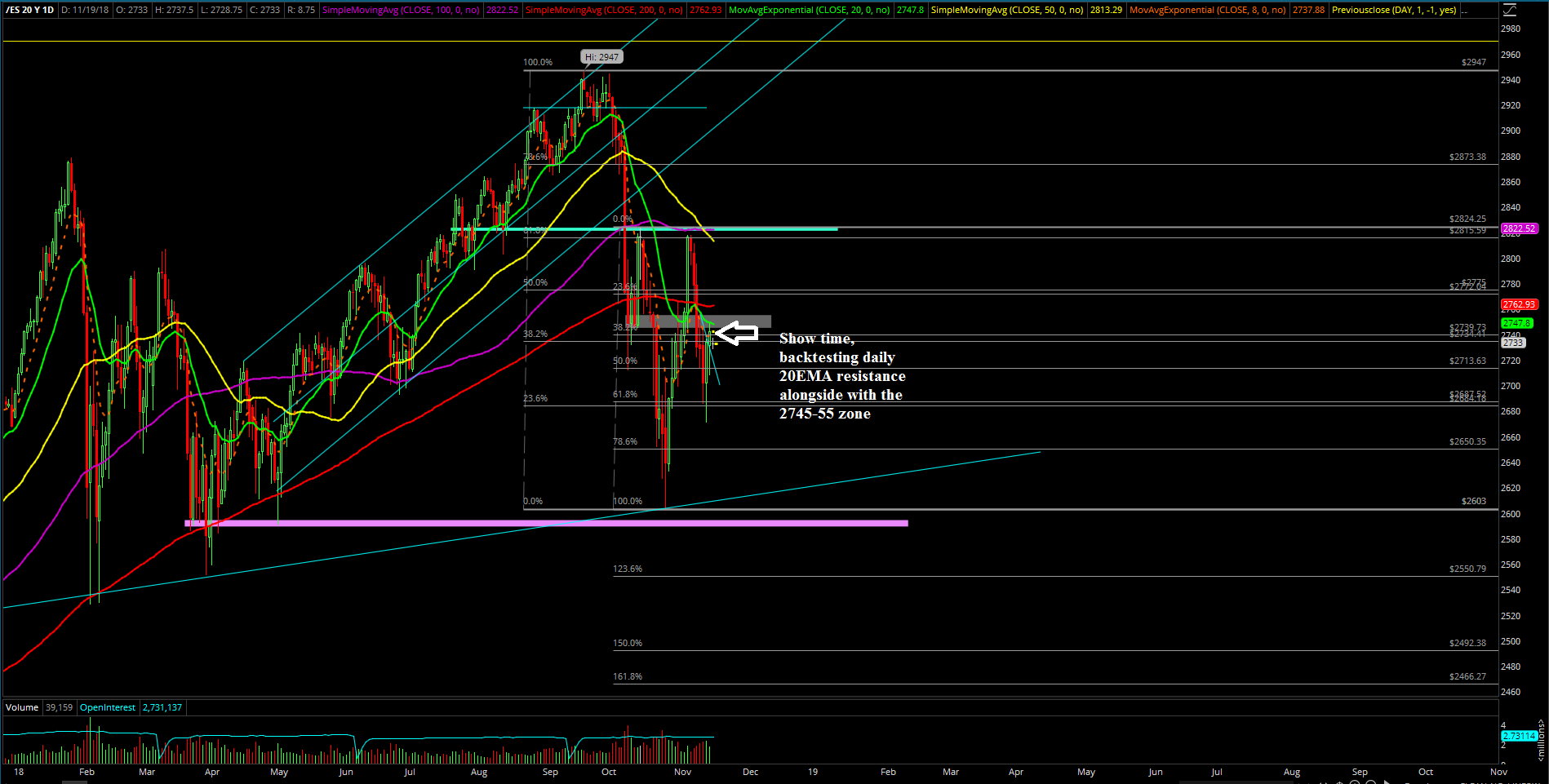 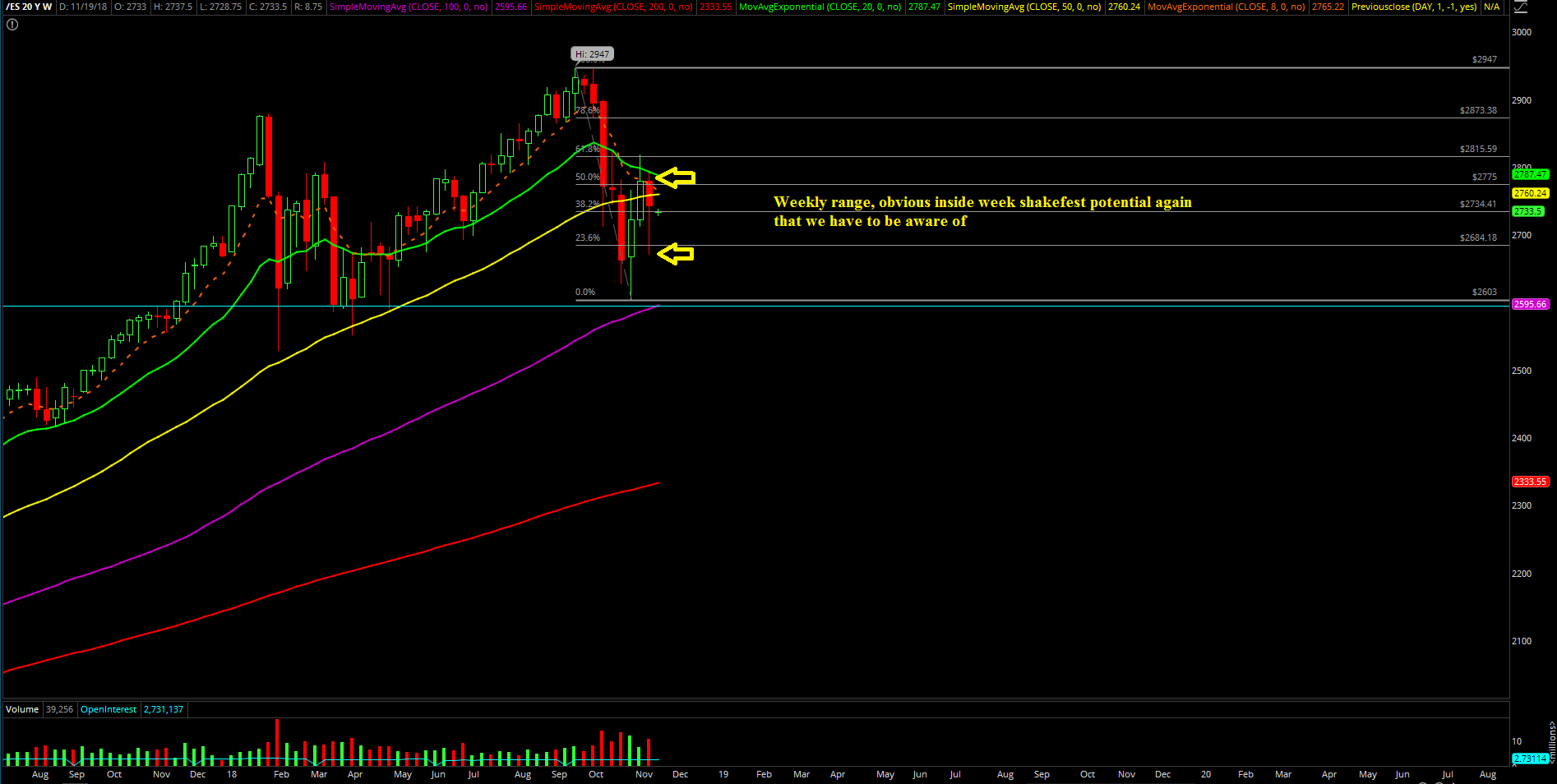 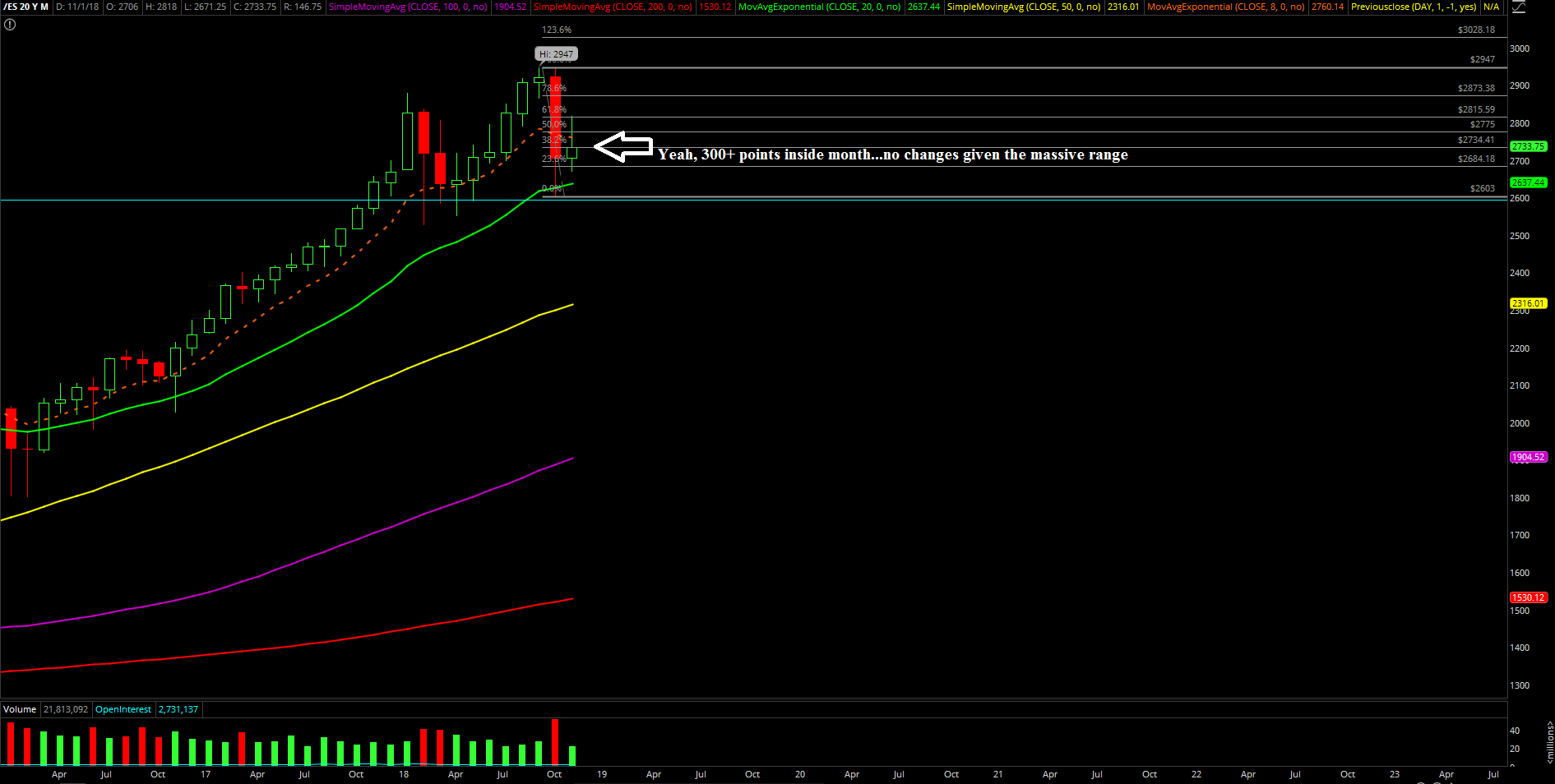 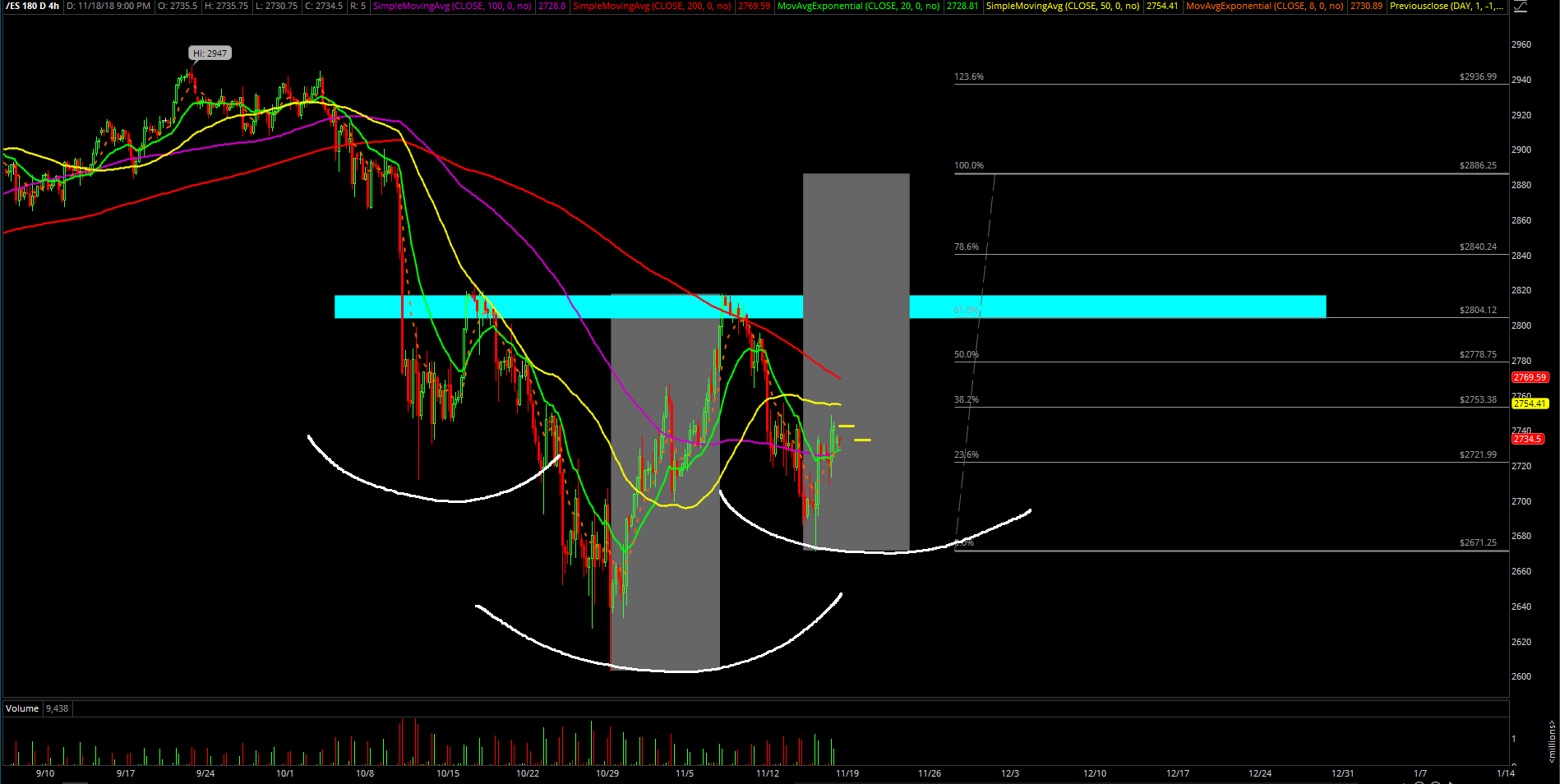 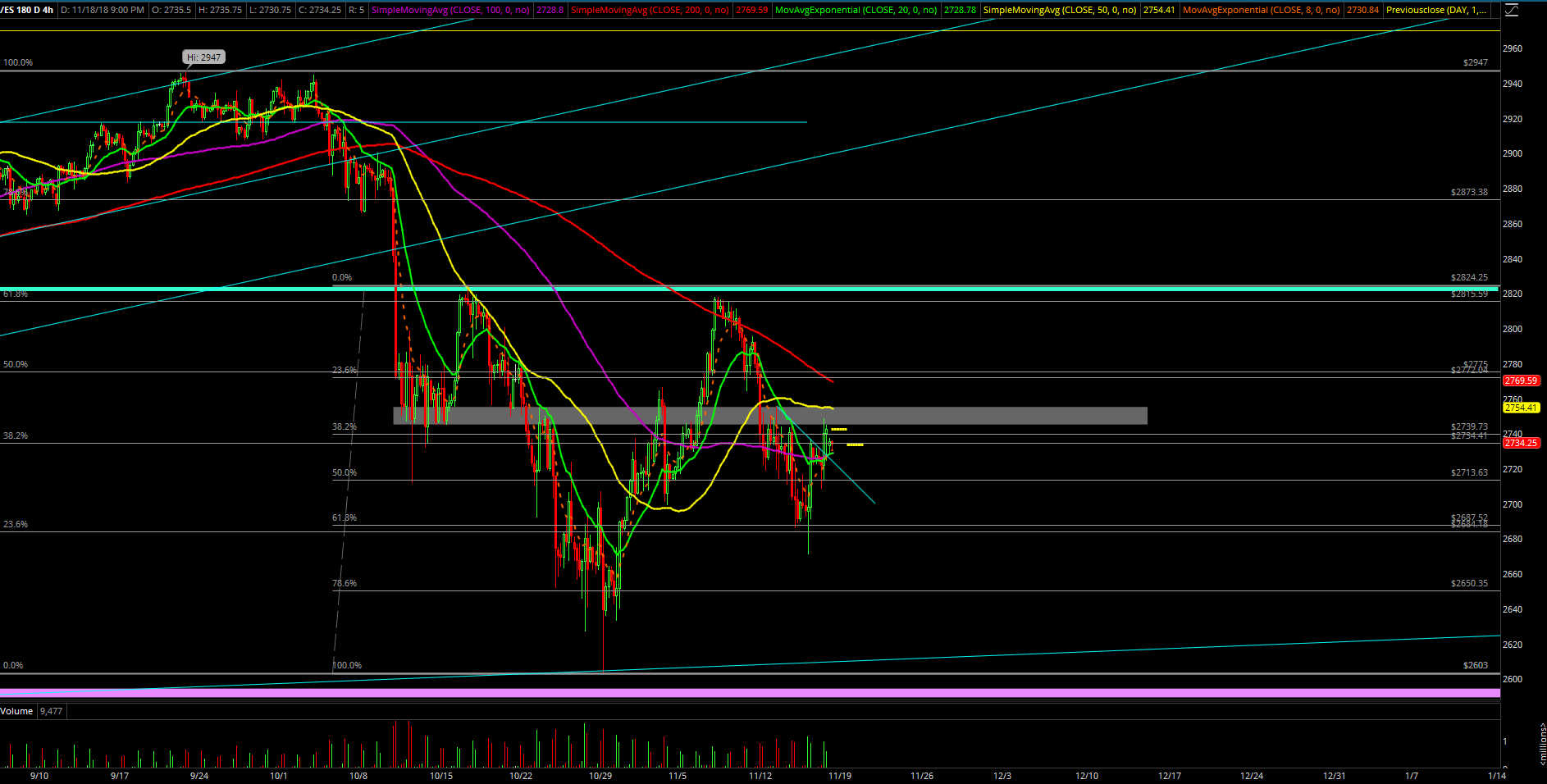 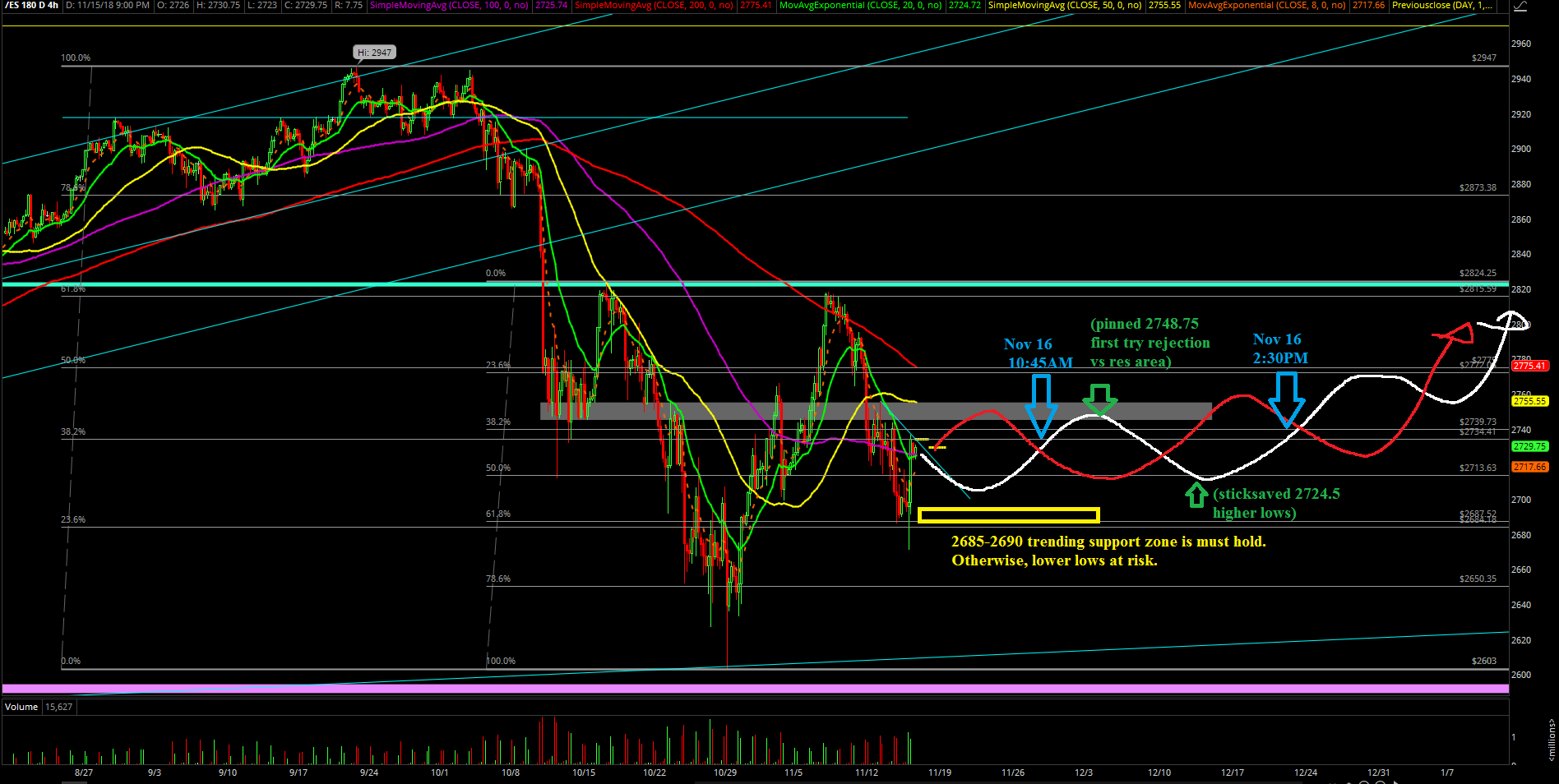 es nov18review6_samepro
Ricky Wen is an analyst at ElliottWaveTrader.net, where he writes a nightly market column and hosts the ES Trade Alerts premium subscription service.