I was told a story today about another analyst who bought into a 3X leveraged ETF on Monday as the GDX was hitting its highs and the market was quite bullish, and then sold for a 10%+ loss yesterday as it was hitting its lows when the market turned very bearish.  Sadly, he and those following him were watching as this rally took hold today.

So, I think this is a good time to remind you of what one of our more astute members – Roy Prasad – has said about markets:

The goal of EW analysis is to analyze sentiment, not participate in it!

I am also going to take this opportunity to remind you WHILE THE MARKET IS UP that most should not be using leveraged ETF’s or options until the heart of a major 3rd wave is taking hold.  And, as I have also noted many times before, I don’t expect that to happen until later this year, assuming we are able to complete wave 1 within the next month or two back towards the August highs.  For those that had a hard time stomaching this recent pullback, please consider whether you are too heavily leveraged into this complex.

As you may remember from the weekend update I sent out to members at Elliottwavetrader.net, as long as we held over 21.60GDX on Monday, and completed 5 waves up, we could have a nice set up for a break out into the Fed announcement.

However, even after we completed 5 waves up on Monday, yesterday, those that were overleveraged in the complex were certainly participating in the sentiment as we were hitting the lows toward the end of the day.  But, if you were able to maintain a reasonable perspective, you would have recognized that we had another 1-2 set up in place, which could lead to a 3rd wave break out.  I wrote about it all day yesterday, and reiterated it this morning yet again.  Clearly, it was not an easy trade to take due to the depth of the wave 2 yesterday, but the pattern was a rather nice set up.

So, with today’s rally, the market has broken out of initial resistance.  However, we still need a larger degree 5 wave structure to complete before we can be much more confident of the fact that this rally is pointing us back towards the August highs again.  For now, we only have 3 waves up.

While the wave 2 pullback was deep and fast (took a little over a day), the rule of alternation would suggest that the wave 4 will likely be a sideways grind for at least a day, which should maintain a high level consolidation.  That is what I will be looking for over the next day or two, followed by the completion of a 5-wave structure up towards the 23.50-24 region, ideally, with the potential to even extend up to 25, which will complete wave (i) of (3) of 1.

Alternatively, if the market is not able to complete a full 5 waves up, and we see the GDX break below 22.30 before we complete that 5 waves up, it would suggest that this rally is a b-wave rally in a larger wave (2), but can still take us back towards the February high before we see a c-wave down back towards the region from which we just rallied, and maybe even a little lower. But, let’s take this one step at a time.

For now, I am going to continue to maintain a bullish bias, and allow the market to tell me if I need to change that perspective.

As far as silver and gold, both also have 3 waves up off the lows now.  But, silver has me a bit more concerned than gold right now.  Silver, as well as a couple of silver miners I was looking at, would suggest the bigger a-b-c alternative pattern I noted above may play out, and it is represented on the attached daily silver chart.  And, I want to reiterate that this is my alternative count.

As I have said so many times before, since we have a 5 wave structure off the 2015 lows, and a 5 wave structure off the 2016 lows, I am going to assume the more bullish counts as we set up for a potentially large 3rd wave to take hold.  If the market tells me to adjust, I may miss some of the initial downside, but we have caught ourselves each and every time we have gotten a pullback without missing much of the downside.  I expect to continue to treat the market in the same way going forward.

So, again, I am going to follow the more bullish expectations until the market suggests otherwise.  The first test we must now pass is completing a bigger 5 waves off of last week’s low, and we may not get the answer until early in the coming week. 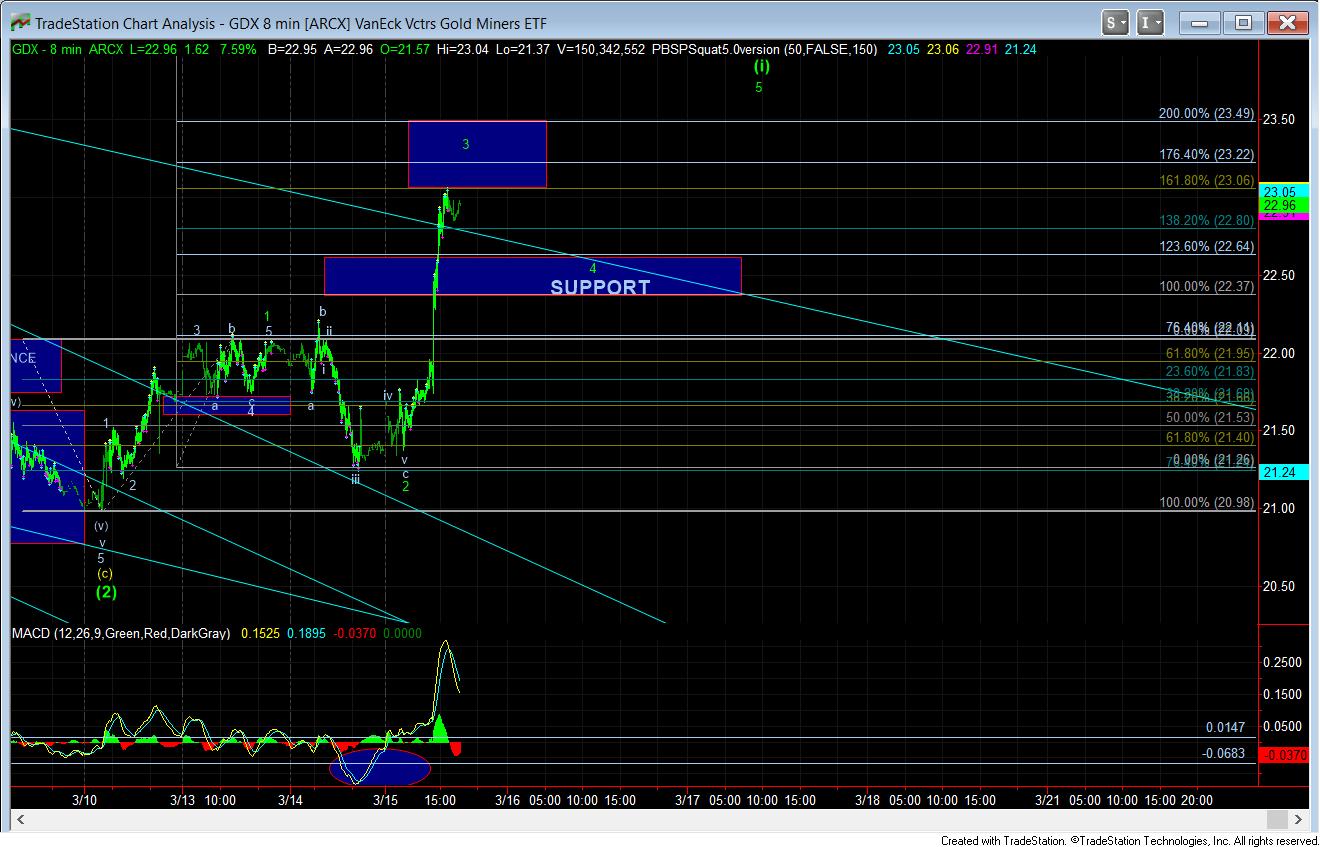