As the title suggests, it certainly seems that the 5th wave lower has begun  . . . in everything but silver.  While silver may very well be joining its brethren directly lower, I still have a hard time identifying the top to the wave iv other than a weird truncated type of top.  So, even though I am not expecting any higher highs in GLD or GDX, I still cannot completely rule it out in silver.  But, clearly, it is not something I would trade aggressively for.

When we saw that “pop” last week on GLD, everyone got excited and assumed we were ready to break out.  But, as I posted before it happened, there was a set up for it to strike a higher high, without invalidating the potential for completing the c-wave of wave 4.

With the decline we have seen thus far in GLD and GDX, it really seems as though we have begun their respective 5th waves lower.  The only problem is the micro counts on both of them leave a lot to be desired.  While I can count a 5 wave structure completed in GDX, I would still like to see a 2nd wave retracement to make that more clear.

In fact, I am dealing with a similar issue in GLD, but the GLD has a less clear structure off its high.  Rather, it counts best as a leading diagonal down for its first wave off the high.  So, again, a wave 2 rally in both would make sense into the end of the week.  And, if silver can actually outperform and somehow muster a rally back to the 15 region to complete its 4th wave at the same time, then all will be right in the world of metals.

But, as I have outlined in past updates during the week, if we are unable to generate a clear 2nd wave rally in GLD and GDX, we may have to consider that this last drop will turn into an ending diagonal pattern.  Within the ending diagonal pattern, waves 1 and 2 to the downside have already been completed in GDX, and labeled in yellow.

While trying to track an ending diagonal to its ultimate lows will be much more difficult than a standard 5th wave lower, it certainly does provide validation that this is a “final” decline in the metals, which is what the name “ending diagonal” clearly implies.

For now, I am going to look for a second wave rally to make this a much cleaner 5th wave drop in the complex.

I know many of you are looking at that blue count on the GDX 8-minute chart.  And, I also know many of you have been expecting a break out much sooner than needing that lower low in the complex.  Well, that wave count is on their for you.  That presents as a 1-2, i-ii off the lows in GDX, which means should we take out the high struck last week in the GDX we may have an initial signal that the bottom is in place for the GDX.

But, I must warn you that I don’t give this potential much in the way of probabilities. First, the initial move off the lows really looks like a clean and clear 3 wave rally, which supports our count of it being an a-wave off the lows.  Moreover, the market topped exactly where it should have for a 4th wave.  And, lastly, we have a relatively nice 5 down off the high of the 4th wave.  Right now, as long as we remain below last week’s high, I am looking down below 17 in the GDX.

In the very short term though – like the next few days, my preference is to see an appropriate 2nd wave rally in the complex (with silver potentially getting that c-wave higher).  But, I still think that rally will terminate below the high struck in the GDX last week, and should that be the case, we will be set up for a strong 3rd wave decline in the complex, pointing us down to our final lows in this 2nd wave which has now taken the better part of 2 years.

As far as the ABX is concerned, I still would not be surprised if it tried to push higher one more time to complete a larger wave (i) off the lows.  But, it certainly has enough waves in place to suggest we are already in wave (ii).

Lastly, the structure on NEM is a bit sloppy down here, and while it is possible it may try one more attempt to push higher in a more expanded 4th wave, as long as we remain below 35, I am still looking for one more drop to complete its wave ii.

For those looking at this complex from a longer term perspective, the market is likely going to present you with an amazing buying opportunity over the next month or two, which may rival the one seen at the end of 2015.  So, don’t lose focus of the forest because you are staring at some pretty leaves. 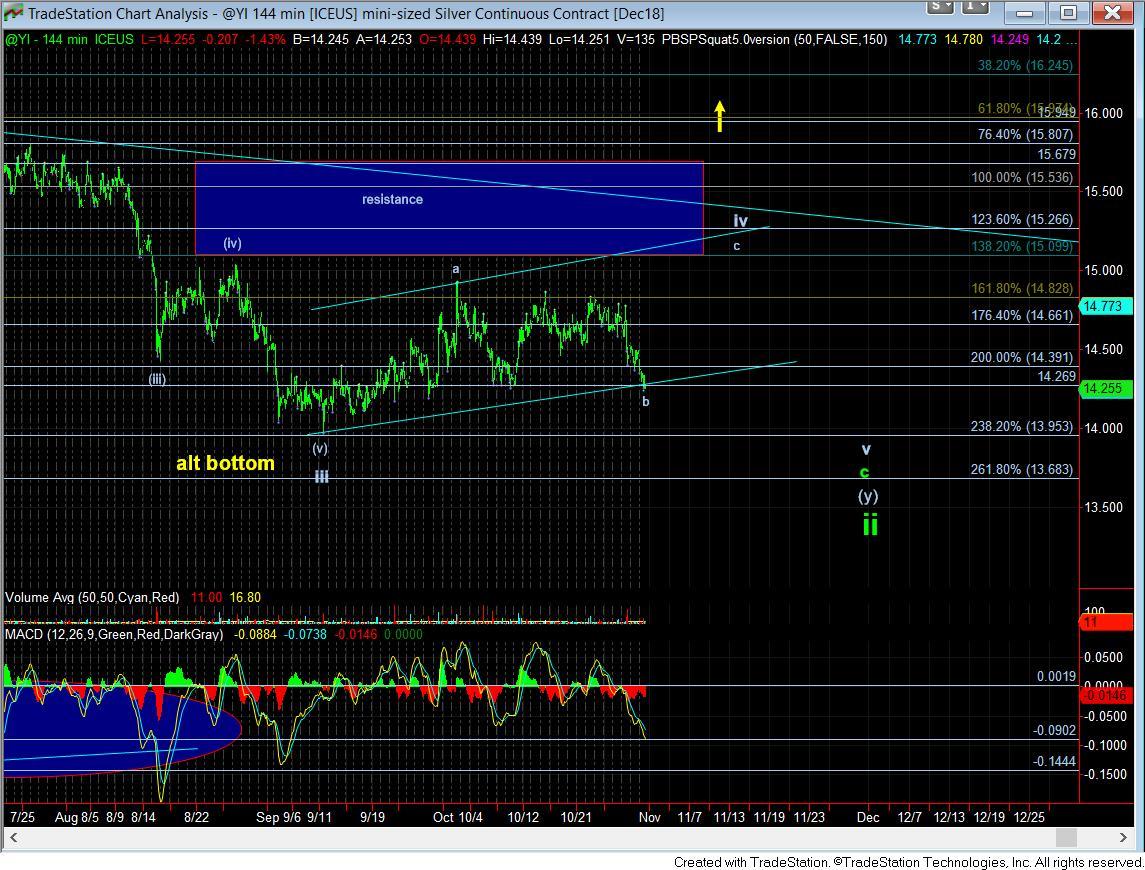