As discussed above, high prices for essentials reduce demand for everything else.

As consumers see their buying power decline, they tend to turn to credit until they can't. A recession frequently starts when consumer borrowings get so high that consumers face no choice but to reduce spending.

In Q2, we saw capital expenditures flatline at a $7.5 trillion annual pace. Historically, this has been an indicator of a coming recession. After all, businesses deciding to cut back on cap-ex is usually because the business expects demand to decline. However, it is worth noting that this indicator typically precedes recession by six months to a year. Cap-ex was flat for two years preceding the GFC, this is something we will want to watch.

Europe is in much worse shape than the U.S. and might already be in recession as energy prices have skyrocketed. Europe is amid an energy crisis, where they might have real shortages in the winter.

This is both a benefit and a headwind for the U.S., on the beneficial side, the U.S. is benefiting as a major exporter of natural gas and NGLs. The relative strength of the U.S. dollar also makes it cheaper to bring in exports, which helps ease U.S. inflation.

On the flip side, many U.S. businesses do a lot of business overseas. Businesses with exposure to European customers will see those segments underperform. In a globalized world, recession in the U.S. has quickly spread throughout the globe during the dot-com bust and the Great Financial Crisis. We haven't seen how easily a recession in the rest of the world might spread to the U.S. since the internet shrunk the world.

An inverted yield curve has frequently been cited as a warning sign for a recession. The 10-2 inversion is the steepest it has been since 2000, preceding the dot-com bust. 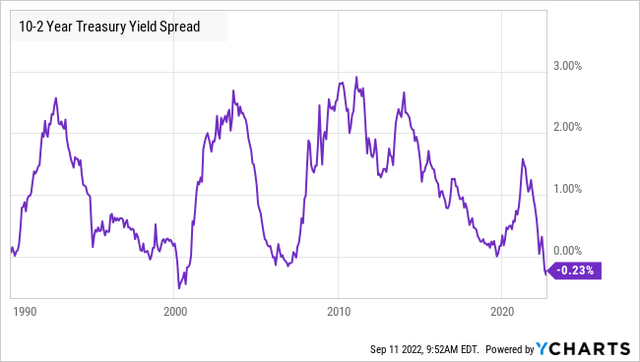 This means that the 2-year Treasury has a higher yield than the 10-year Treasury and is frequently interpreted as indicating that the "smart money" in the Treasury markets expects a recession. I discussed yield curve inversions back in March here.