Copying and pasting a section from our ES trade alert room’s premarket gameplan report. FYI, the ES trade room provides real-time entries and exits with pre-determined stoploss and target levels alongside with real-time lessons on strategy/risk management/psychology/momentum. We specialize in quick intraday alpha setups and short-term swings with duration of 2-5 days and occasional 10-15 sessions holding period (some key levels + strategies have been redacted for fairness to subscribers). In addition, we share bonus setups across commodities such as GC/GOLD,CL/Crude oil, PL/platinum,ZS/soybeans and individual stocks from time to time in order to generate more alpha/outperform.

The most recent breakdown setup: April 21 rejection at  prior resistances that showcased a massive intraday turnaround.  If you recall, the day started at the highs and closed at lows: ES -2.8% and -4% NQ range on April 21st. During the final week of April, both indices had fulfilled their ES 4100s NQ and 13000 targets.

Price action remains trending down as it’s below daily 20EMA.

The onus is now on the higher timeframe buyers to showcase they want to build a floor around here or the selling keeps cascading into lower lows. Hence, we also need to be aware of potential big mean reversion moves to the upside IF price action stabilizes vs. the multi-month lows area. We’re watching ES 4000-4080 and NQ 12800-12500 area closely, more on this in the latter section of this report.

We did quite well in April scalping ES+NQ so we’ll continue to go for quick opportunities given the elevated volatility.

Don’t plan on holding overnight inventory unless we see an opportunity for a massive mean reversion to the upside.

Focus on scalp opportunities vs the key levels for execution, level by level approach

Negative sentiment at extremes and stocks under 200 day moving average near extremes. The indices are also hovering around 2 standard deviation lows.ES+NQ hovering around multi-month lows of this year. This is often the characteristics of a sharp mean reversion so we need to be aware of the risks to the upside if a deadcat bounce/climax bottom occurs here.

In essence, higher timeframe buyers such as the monthly are looking for an attractive deal here as we head into Weds FOMC + jobs report near end of week.

Eg. if a scenario like piercing multi-month lows 4100~ on ES occur, flush out a new lows into 4080-4000s and then by end of week it closes above/near ES  4250. Then, it would act as a huge clue/confirmation late sellers failed and buyers found a floor to play with for the next couple weeks of May.

Right now, we don’t see risks of limit down action so we’ll shy away from extreme views of some market participants until price proves otherwise. Wait and see mode. 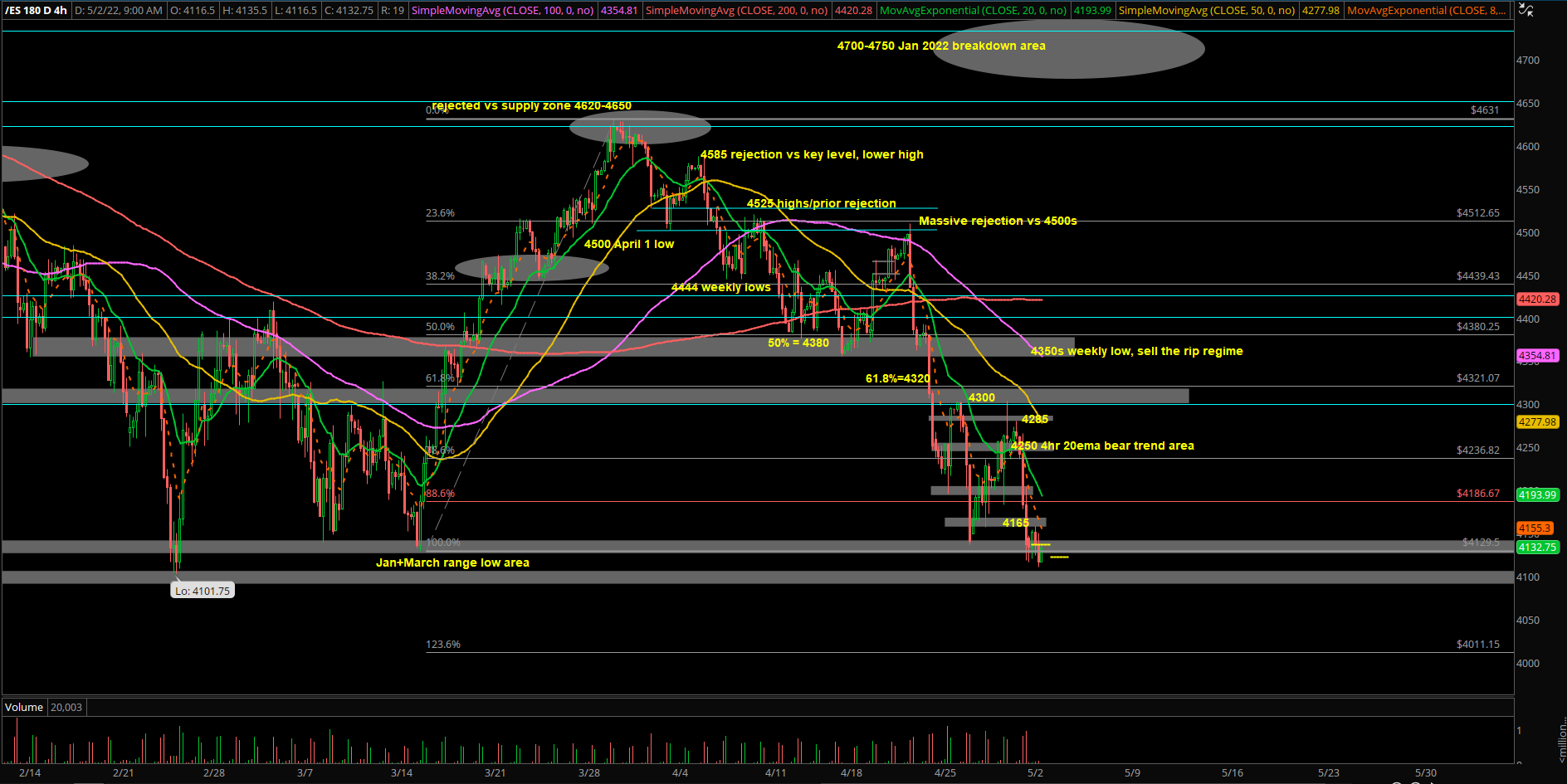 ES MAY2_REVIEW2
Ricky Wen is an analyst at ElliottWaveTrader.net, where he writes a nightly market column and hosts the ES Trade Alerts premium subscription service.