Copying and pasting a section from our ES trade alert room’s premarket gameplan report. FYI, the ES trade room provides real-time entries and exits with pre-determined stoploss and target levels alongside with real-time lessons on strategy/risk management/psychology/momentum. We specialize in quick intraday alpha setups and short-term swings with duration of 2-5 days and occasional 10-15 sessions holding period (some key levels + strategies have been redacted for fairness to subscribers). In addition, we share bonus setups across commodities such as GC/GOLD,CL/Crude oil, PL/platinum,ZS/soybeans and individual stocks from time to time in order to generate more alpha/outperform.

In addition, no short-term directional trend that has outlasted for more than 2 weeks before it reversed into the other side testing extremes. Whipsaw environment.

For the most part, all dips into 4380s-4400s were bought throughout the shortened holiday week. However, by end of the week price confirmed that bears were in full control with the short-term downtrend with Thursday closing around the week’s low.

Price is trending below DAILY 20EMA (main trend), and the shorter term has been getting rejected vs 4HR 20EMA resistance every time.

Ongoing short-term bear trend below daily 20EMA. Daily closing prices need to ultimately remain below 4425/4444 in order to keep downside pressure going. The  50% fib retracement of March has been fulfilled at 4380s. Next logical target would be the 4350/4320 area, the latter being 61.8% retracement. (Sunday overnight lots = 4355s)

For bulls to reverse this short-term downtrend, needs a daily close above 4425 (prior couple session’s high area +trending daily 20EMA) for initial confirmation of some sort of range low being in place and having a reference point. This must be followed quickly by a breakout above 4444. Otherwise, we cannot see a sticksave in place because the April 11th week played out as a bearish continuation model. Level by level approach, we cannot revisit 4500-4520 or above without first reclaiming some key resistances.

Also, important to keep an eye on NQ 13800-13850 major support area, higher timeframe buyers may show up and defend this region for a bigger sticksave/bounce. A lot of megacap/tech stocks at an important juncture as well and acting fairly weak. This could change with a +2% trend day up session quickly as we’re starting to see early indications of a temp bottom setups across many important stocks (price has not confirmed/turned yet)

In addition, NQ key resistance for this week is 14280, which represents the high area of past few sessions. Downtrend pressure continues until this level is recaptured on a daily closing basis. (roughly 2-2.5% away from current price os 13930s)

Based on overall context, we’re leaning more towards a temp range low/weekly low for ES+NQ so need to be careful of being overly confident on the bearish side here. Remember, zero confirmation at the moment because of the daily closing prints needed. Just need to be adaptable here because if price action keeps cascading down with lower highs and lower lows on the daily chart, then we have a lot more points to fall before the ES 4100-4200s/NQ 12900-13000s range low. (100% retracement area) 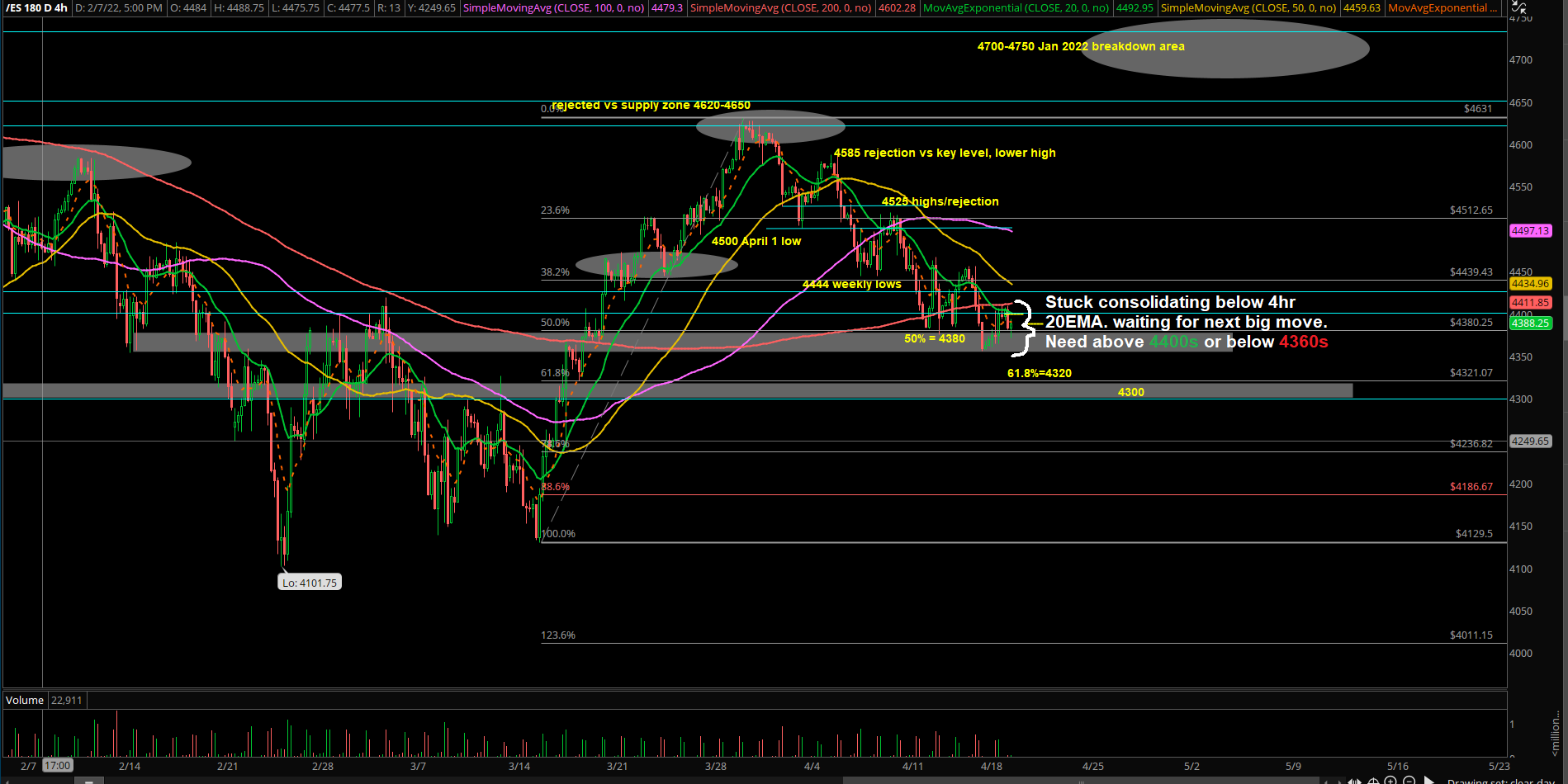 ES APRIL19_REVIEW
Ricky Wen is an analyst at ElliottWaveTrader.net, where he writes a nightly market column and hosts the ES Trade Alerts premium subscription service.