Last night futures broke over the 2144, 2146 & 2148 resistance levels cited for us to get a small C wave down to 2135 in what was hoped to be the start of a wave circle ii. They instead extended to a new nominal high in this move off the June low. While the count for this to still be a (v) of circle i remains valid the relative size of the move off July 6 2065(ES) is causing me to lean more to the "Lake George" count I had where that was circle ii and this is (i) of circle iii (shown in green on the 15min). The fly in the ointment is that we now have two nearly equal legs off the June low and that now makes the yellow "b" wave a more distinct possibility.

In all counts we are still due for SOME retrace and have much of the same sell signals from numerous indicators even if it seems PRICE is a lagging indicator of late. As I have said before the nature of the start of the retrace will be very important. A mild abc down to only the 2120s again can easily be ALL of green (ii), whereas a 5 wave move closer to 2110-2100 region could be the wave (i) of yellow c.

I will say it again even if folks think it is a shameless plug... StockWaves has many individual name setups identified that 1) only need small consolidation if any 2) are setup to out perform the broad markets 3) give you the ability to layer into quality names... So even if you are in the yellow c camp (or worse) there are names that you can "dip your toes in", and likewise if you think we are heading straight to 2300+...

But Zac, what if we are breaking out? We looked at this potential in the New Member Live Video yesterday (a Webinar available to everyone every Wednesday at 5PM). The crossover/inflection point that makes it increasingly likely that we are in the heart of a circle iii of 3 is not until price gets a sustained move past the .618 extension; 2196 SPX & 2190 ES. Until that we are in a region that is more common for wave i and (i) to top. IF we do cross that point without a clear (ii) or ii Fibonacci PinBall will have us targeting the 100% extension very quickly that is another 139 pts or 6.35% upside that could be played as a breakout with much higher confidence than where we are here.

I remain lightly hedged for my individual longs that I have also trimmed since adding after the BRexit, and looking to layer in more ind names.

Also my CABPCR hit a pretty extreme level the other day and has since traced out what looks like an LD... while the CABPCR is a better indicator of extreme bottoms a very low reading like this can be a warning of a potentially more significant top. While I do not see a larger C down as a high probability I am at least heading this warning in continuing to look for a "local" top and a clear corrective retrace to hold even high support. 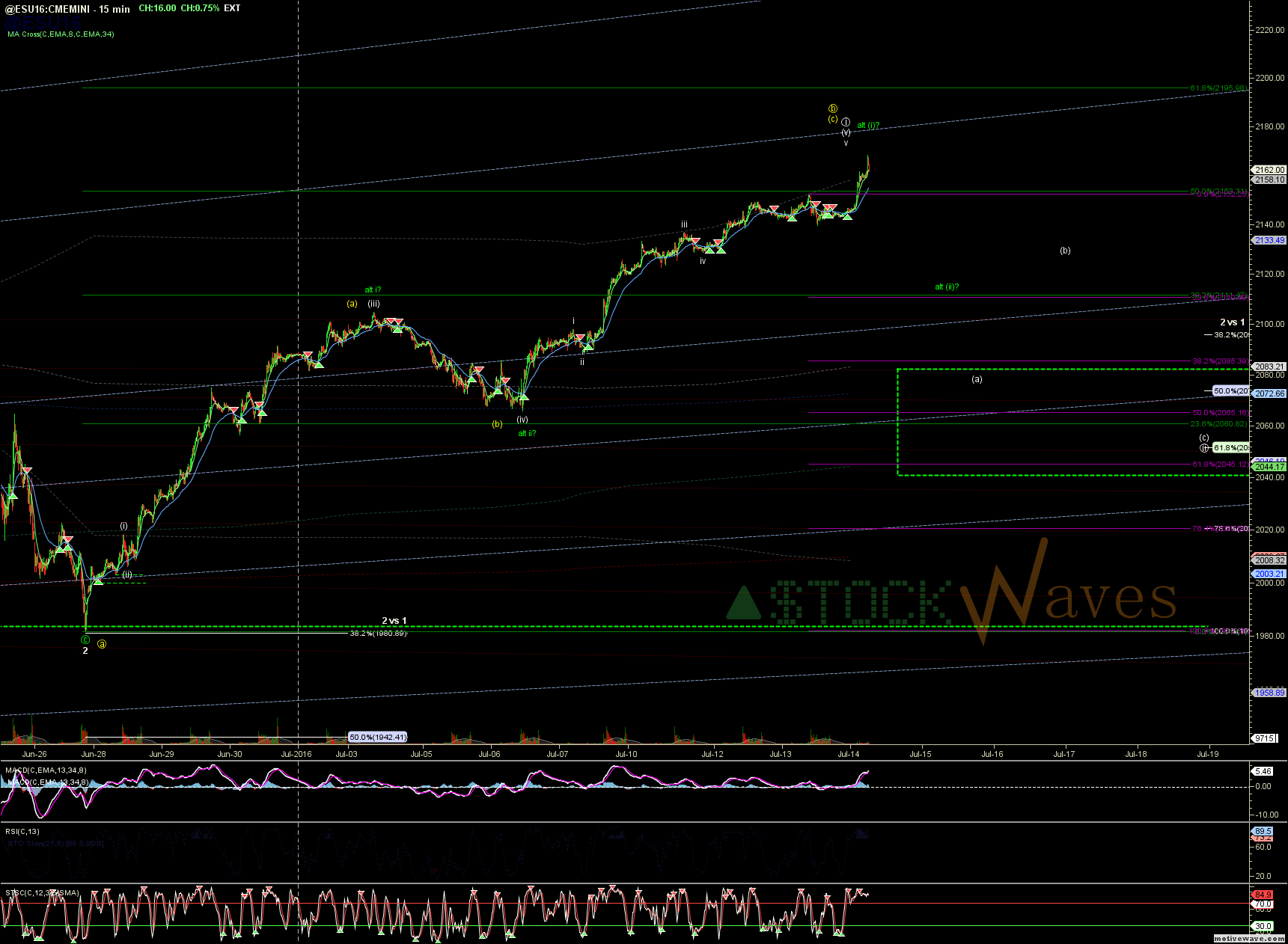 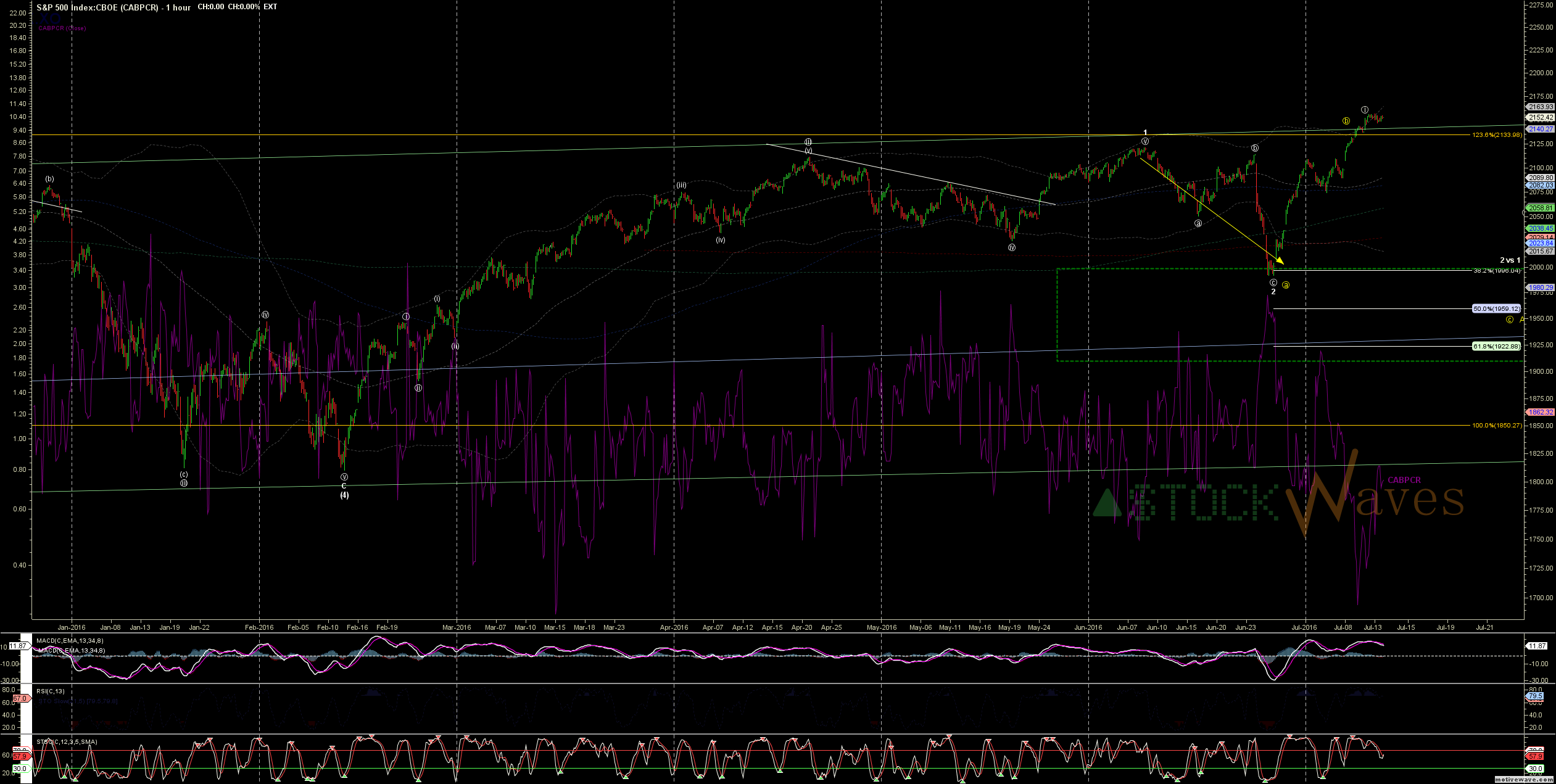 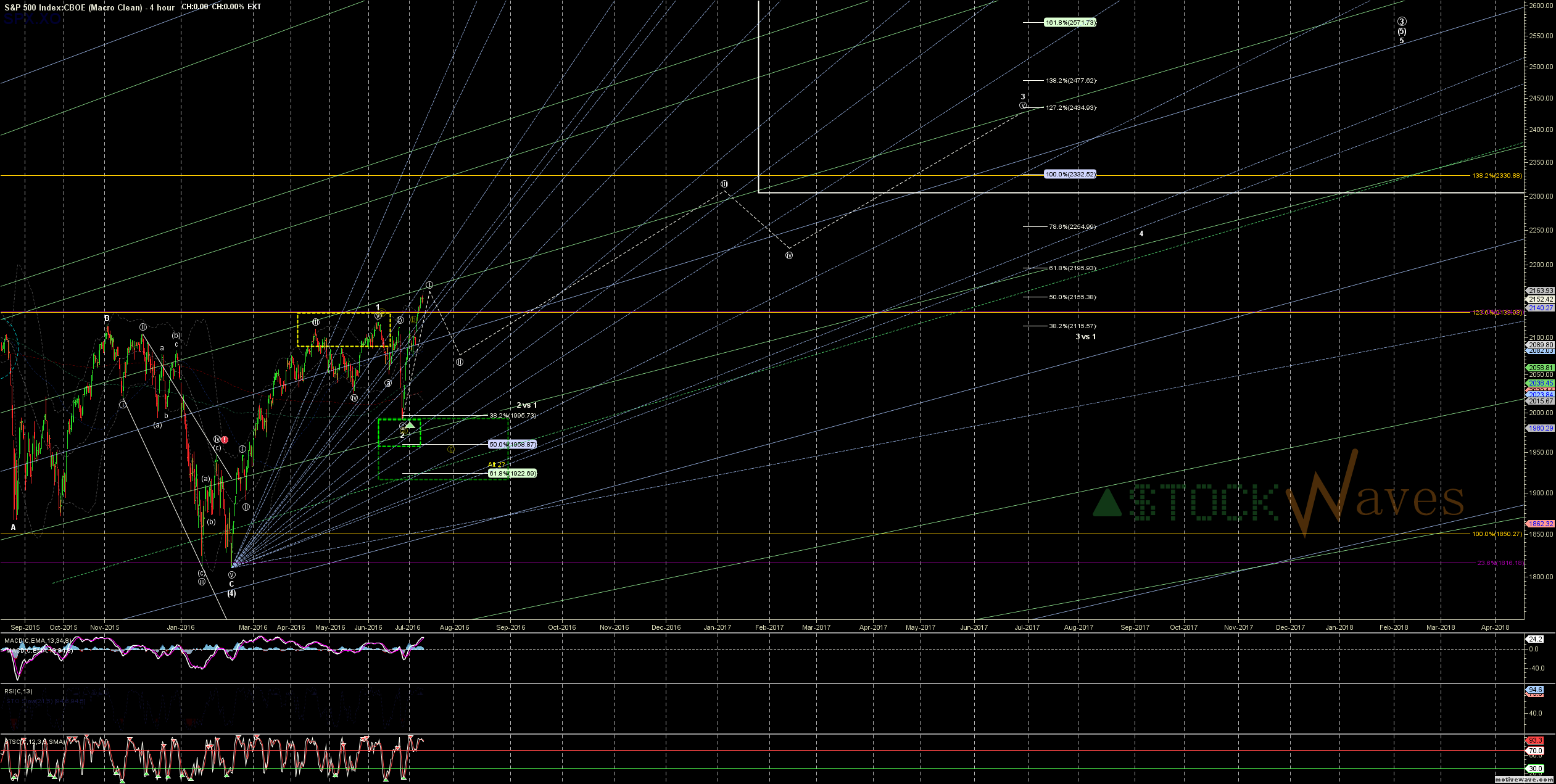 @ES# - BIG Macro - Jul-14 0634 AM (4 hour)
Zac Mannes is a senior analyst at ElliottWaveTrader.net and co-host of the site's Stock Waves service, which provides wave alerts and trade set-ups on individual stocks.