With the market following through on our ideal structure, the rally is now taking us up towards our target region for the b-wave.  And, as we have seen, the whipsaw continues.  In truth, I do feel badly for those who do not understand the larger context of the market right now, as they are likely scratching their heads.

In fact, someone posted how Dennis Gartman noted that "we are a bit uneasy this morning being short."  This is EXACTLY what a 4th wave SHOULD do to traders.

While I still think this b-wave can take us the rest of this week within this region until it tops (and maybe even into next week), we have now developed enough of a rally to consider a minimal b-wave as having completed.  Again, it is possible that this MAY be all the b-wave we get, similar to how we topped at the highs of the last rally and headed down to lower lows.  So, it means that trading for further upside at this point in time comes with much higher risk.

If I had to suggest the ideal pattern play out, it would take the shape of the pattern noted on the attached 5 minute ES chart.  As long as the 2450ES region is maintained as resistance, then we can still take another indirect path higher in a bigger, and more protracted b-wave.  Also noted on that chart is the support level which “should” hold if we are indeed going to push higher in this b-wave.  A direct break out strongly through 2450ES would suggest we are heading to our higher target box in a direct fashion.

A break down below that support in impulsive fashion begins our c-wave drop towards the middle box on the 60-minute SPX chart, wherein I would expect we will finish the (a) wave, still with the ideal target of 2370SPX, but with a minimal target of 2400SPX.

And, while I still maintain the lesser potential for the market to even head to 2500-2520SPX, I still believe the probability of that occurring to be between 15-20% at this time.  As long as we remain below resistance of 2465SPX, I have to maintain a more bearish intermediate term resolution.  Moreover, trading for such higher regions comes with significant risk, and we will likely find ourselves right back in this region and lower into October even if we do strike those higher levels in September.

So, even though I have noted many times before that trying to navigate each twist and turn in a 4th wave is akin to throwing Jello for distance, we have done rather well identifying most of these twists and turns thus far. But, that does not mean you should become overconfident, and trade these regions aggressively, as I still caution against getting aggressive on any position in this region.

And, as long as the market maintains below 2465SPX, I think the next bigger turn is pointing lower.  It would take a move through 2480SPX for me begin to see the potential for higher highs in the SPX at a higher probability. 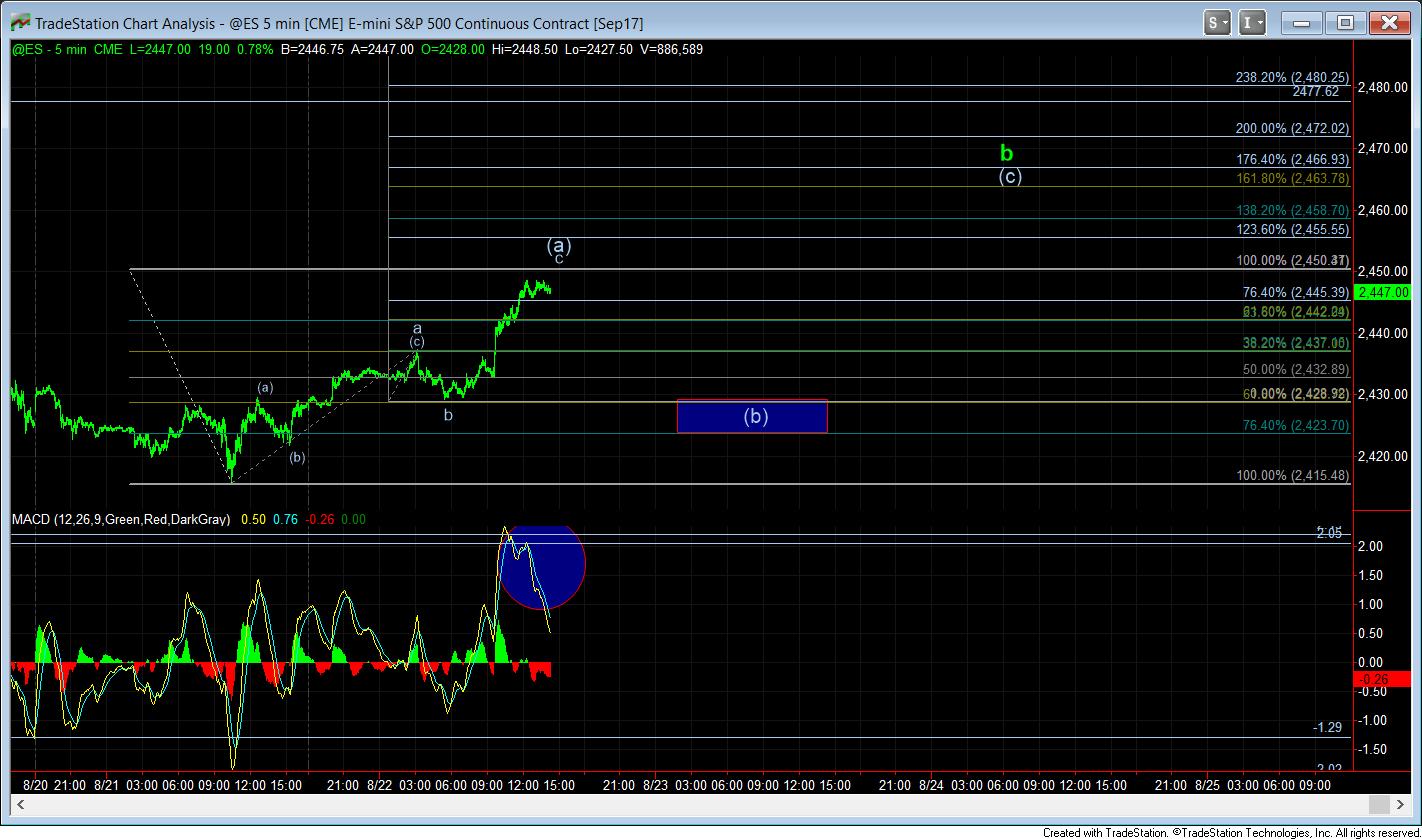