Thus far, we have formed a bottom to the a-wave of this wave (4).  And, since that time, we have been in a b-wave rally.  Before I go into the detail of the wave structure, I want to repost something I posted in the room today:

For those new to Elliott Wave, one of the most important aspects of the analysis is identifying where we reside within the trend.  When we are in a corrective structure, as we are now, it means to almost expect the unexpected, especially in a 4th wave.

4th waves are consolidations.  But, the structure of a 4th wave is quite variable, in fact, arguably the most variable structure of the entire 5-wave Elliott Wave structure.  For this reason, it is advisable to not trade heavily within the structure, as it often leads to much frustration.

So, please be aware we are now likely within a 4th wave, and it will take some time.  So, if you intend to trade during this wave, I suggest you reduced your position sizes because you will have to widen your stops.

However, now is the time to begin planning for how you intend to ride the 5th wave higher.  So, this is the best time to review the stocks you want to buy to ride that rally to 3000+ SPX.

That being said, if you chose to trade within a 4th wave, I would STRONGLY suggest you reduce your position sizes so you can widen your stops.   But, again, I want to warn you that 4th waves have a tendency to chop traders up, so please recognize this before you begin to jump head first into 4th wave trading.

As far as where we are in the wave structure, we have now rallied enough to consider the (a) wave of the b-wave as completed.  While there still can be a higher high to this (a) wave, the micro structure presents as having already begun the (b) wave lower.

Since the ES and SPX have different lows, as the ES saw a drop down to the 2530 region, which was not seen in the SPX, it causes a difference in the retracement targets between the two, as you can see on the attached ES and SPX 5-minute charts.

The practical effect of this will be that the (b) wave pullback in the SPX will see much deeper relative to the bottom of it’s a-wave as compared to the ES.  But, they both seem to have confluence around the 2625SPX region.

Additionally, b-waves are notorious for being the most variable wave even within the 4th wave.  For this reason, I try to avoid trading them.  Rather, as I noted in the live video this morning, I wait for c-waves to trade.  You see, c-waves have 5-wave structures, and are the safest segments within a 4th wave to even attempt to trade.  And, since we have a c-wave within the (b) wave, as well as a c-wave down to complete the 4th wave, there is plenty of opportunity to trade, but you must be patient for the appropriate set up.

At the end of the day, I think this 4th wave should take us at least several more weeks, and there is even potential it can drag out until May.  However, since our larger degree target for this pullback is the 2424-2539SPX region, I would be strongly looking to buy stocks I want to ride in the rally to 3000+ once we hit our target in the cash index. 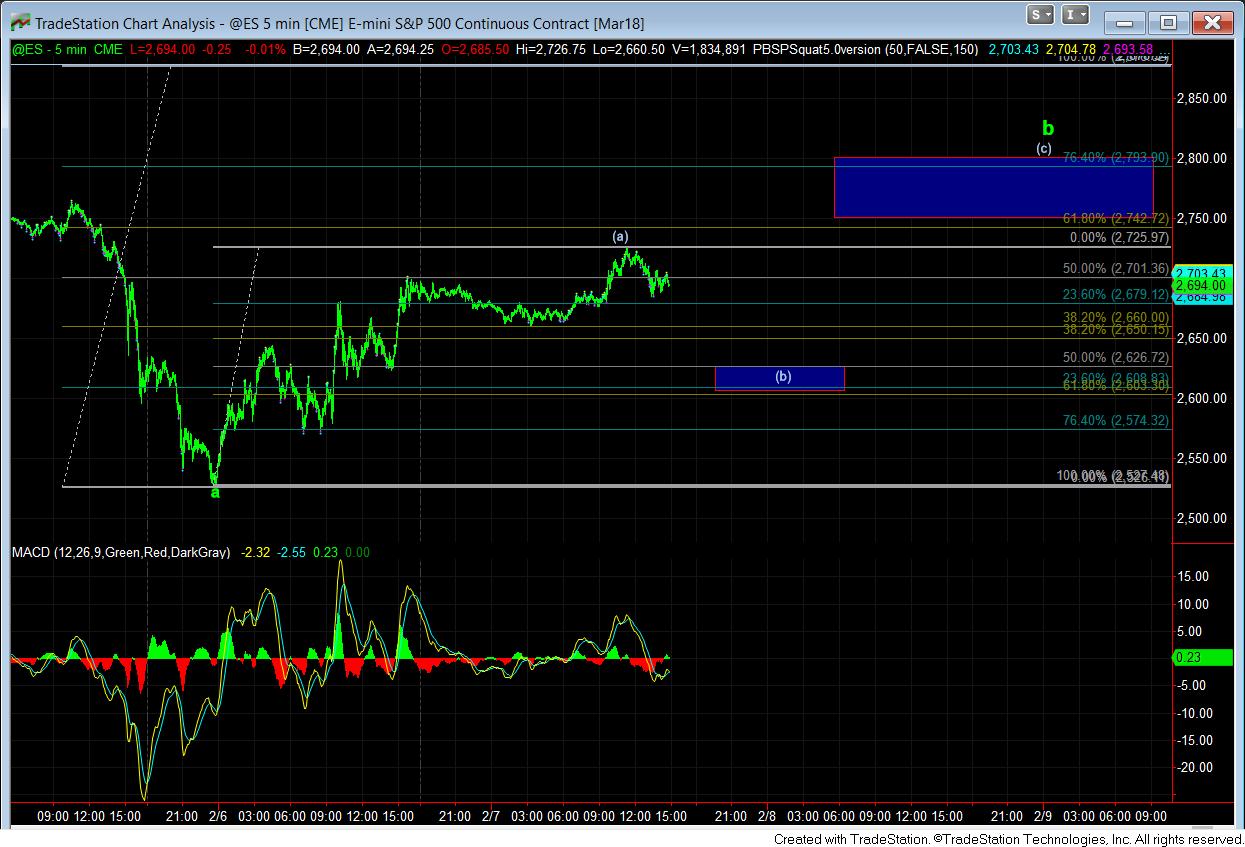