First, I want to start off by apologizing since I clearly did not foresee this downside today.  Rather, the set up to me looked to be higher for today.

Next I want to note that I think this consolidation may very well continue into the end of the week.  Allow me to explain.

Since we are in a diagonal, we are looking for this green (a)(b)(c) move to complete this segment of the larger wave structure towards our higher target box in the 2150 region.  Thus far, we have what counts best as an (a) wave which completed on May 21st. Since then, the market has pulled back in a (b) wave, but we have no solid evidence that this (b) wave has completed.  In fact, when the market did not take advantage of the opportunity to gap up today, it seems to be telling us that the (b) wave is not over and that we should be strongly considering the alternative (b) count, which can take the yellow route up to 2126SPX first, or simply continue down in an ending diagonal for the c-wave of the (b) wave.

The reason I am having such difficulty in deciding which of these patterns is operative is that, today, the market literally held to the penny the bottom of the wave (1) off the lows, which still keeps the potential on the board that we could be heading up to 2150 right away.  So, unfortunately, we are caught in the middle.

But, as long as the market remains below the 2126SPX level (where (a)=(c) in a alt b-wave in yellow), then I believe we are likely heading lower to the 2090SPX level or even extend down to the 2076SPX level.

But, in order to even get to that flat pattern up at 2126, we have to take out the downtrend channel.  Until that happens, we could be heading directly down to the lower support region in an ending diagonal for the c-wave of the (b) wave.

Ultimately, if you are still in the market right now, you have chosen to do so understanding that we are in a diagonal.  And, within a diagonal, the only thing you can expect is going to be whipsaw, and lots of it.  Furthermore, until this diagonal has signaled it has completed, we SHOULD be moving marginally higher at each break out.  So, for now, I am still expecting that we can strike the 2150SPX region, as long as 2075SPX holds support.  But, the path to that target region will not be easy or obvious. It will take a move through 2126, and follow through over 2130 to see our upper region target box struck sooner, rather than later. 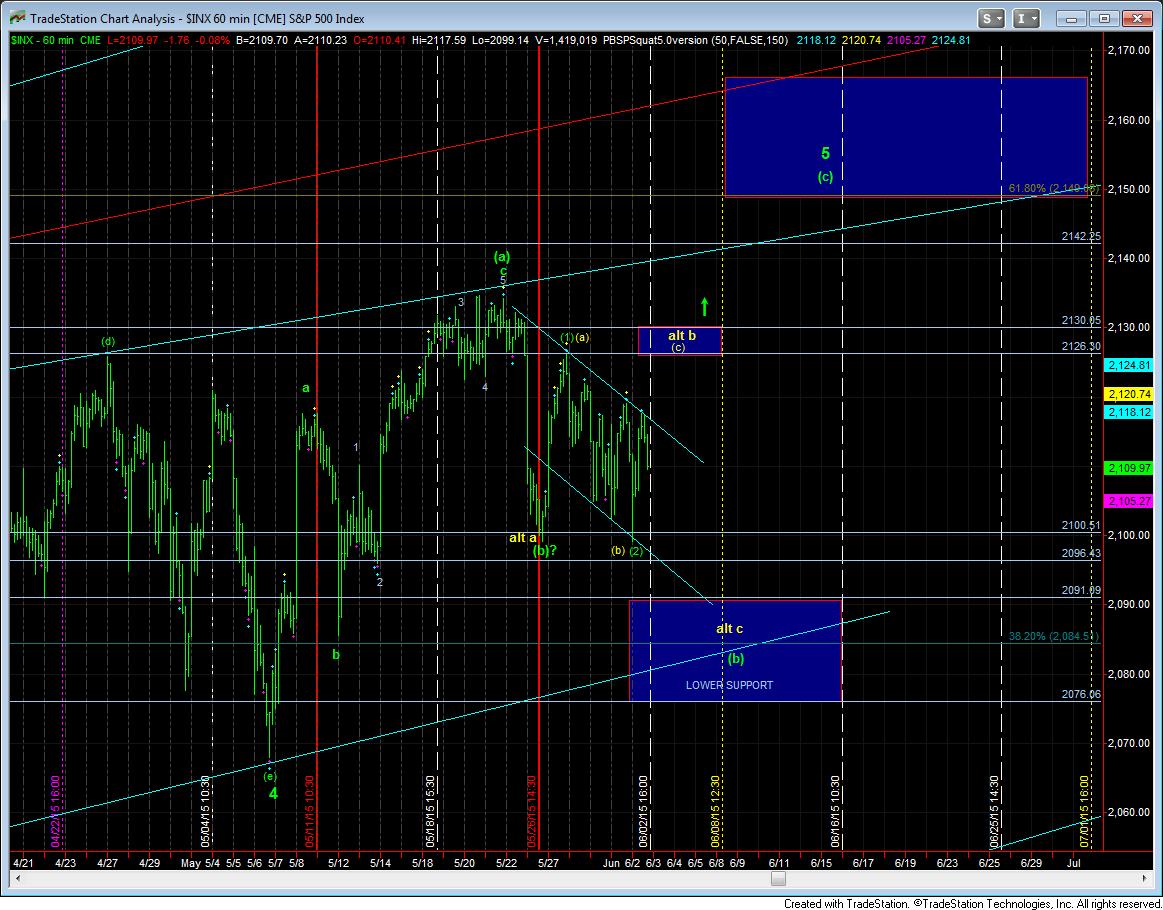