I am posting this update early, because the market is now at an important juncture from which it can make a decision today.   So, I want you to see the parameters before we begin to follow through.

As I noted yesterday, as long as the market holds below the 3595-3615SPX resistance, we have a downside set up in place.   Thus far, that seems to be holding.

Ideally, the structure we are developing in the SPX is pointing towards a [c] wave decline to test our support box below, as presented on the 5-minute SPX chart.  As long as that support box holds, then we are likely heading to 4000-4100SPX sooner rather than later.  Alternatively, if that support box is unable to hold, then the yellow count rears its head once more.  But, the probabilities for that are dwindling.

The one chart that still does leave the door open for the yellow count potential is still being presented by the NQ.   As long as we hold below 12,409, we have a reasonable 1-2 downside set up for the c-wave I have been attempting to track.  In order to invalidate this potential, we will need to move over that mark. So, this chart does present some near-term bearish potential before the next major rally phase begins in earnest.

I want to also add that the deeper the market drops in wave [2], the more likely the blue count on the 60-minute SPX chart will become.  You see, if we see a deep pullback for wave [2] then the next 5-wave structure is only pointing us to the market pivot region overhead.  And, unless we see some massive extensions in the 3rd wave break out over 3670SPX, a deep pullback will likely provide us with a bigger [1][2] set up as presented in blue, which then opens the target for wave [3] up to the 1.236 extension in the 4900-5000 region.

So, much information will be gleaned from the next pullback in the market.  And, I still think this can be a wonderful opportunity to add more long positions, especially if the NQ does get a full c-wave down.  However, if the NQ should take out its 12,409 mark, then it will likely point to a melt-up potentially beginning sooner than I currently expect.  At the end of the day, we are still trying to clean exactly how wave [3] of [iii] will be playing out into 2021, as the market tries to develop that structure. 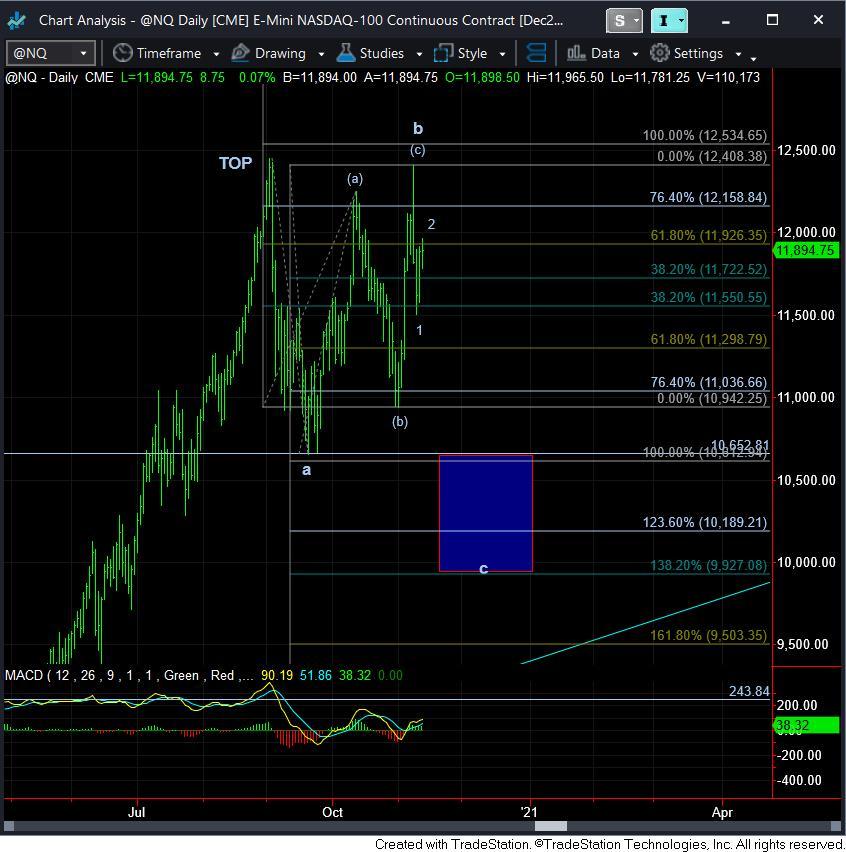