Who Was Leonardo Bigollo and Why Does He Matter To Us?

After the fall of the Roman Empire in 476 C.E., much of European advancement in mathematics and philosophy was either lost or simply remained stagnant. Although there is a difference of opinion among historians regarding the classification of the period after the fall of the Roman Empire, this period became commonly known as the Dark Ages. Among recent historians, the Dark Ages lasted until around the 10th century.

Around 1170 C.E., Leonardo Pisano Bigollo, or more commonly known as Leonardo Fibonacci, was born to Gugliemo Bonnacci, a wealthy Italian business man. To give you some reference during which times Fibonacci lived, the Leaning Tower of Pisa was being constructed at the time.

While Leonardo was still quite young, his father was appointed as an official at a port east of Algiers in North Africa. It was not long until Leonardo was traveling with his father through the Mediterranean.

It was during this period of time that Leonardo learned about the Hindu-Arabic numeral system, and recognized that these numerals were simpler and more efficient than the Roman numerals being used in Europe at the time.

It was not long thereafter that he published his famous book Liber Abacci (Book of Calculation). This book was a key turning point in European mathematics, as it introduced the European community to one of the greatest mathematical discoveries of all time, namely, the decimal system, in addition to the numeric system which we still use to this day. This was considered to be the most important advancement in mathematics since the start of the Dark Ages.

Within this sequence, each higher number is the sum of the prior two numbers, and the ratio of any two consecutive numbers approximates 1.618 or its inverse, .618. The higher you move through the sequence, the closer you move towards the 1.618/.618 relationship.

This .618 number has been referred to as the "Golden Mean" throughout history. We also refer to this number as Phi.

Phi is a number which exhibits many unusual mathematical properties, and is also the solution to a quadratic equation. These concepts have been understood by Plato, Pythagoras, Da Vinci, Kepler, Bernoulli, and Newton.

Historic structures have been built by architects of famous Greek structures, such as the Parthenon, based upon the concept of Phi, and even as far back as the architects of the Great Pyramid of Giza in Egypt, who recorded their knowledge of Phi as the building block for all man nearly 5,000 years ago.

What makes Phi even more unusual is that it can be derived in many ways and is exhibited in relationships throughout the universe, such as proportions within the human body, plants, DNA, the solar system, music, population growth, and, yes, the stock market.  Phi is the one underlying constant throughout all of nature and governs the laws within nature. In fact, the greatest minds of history, such as Pathagorus, Plato, and Kepler, all felt that Phi was the key to the secrets of the universe.

As an example of how Phi is the building block within the human body, in the 1960’s, Drs. E.R. Weibel and D.M. Gomez dissected the architecture of the human lung and discovered a Phi-based relationship in the formation within the bronchial tree. Others have discovered that the diameter of the bronchial tubes decreases in the same proportion.

Another example is when Eugene Stanley of Boston University, along with researchers from MIT and Harvard discovered that the physiology of neurons in the central nervous system also exhibit Phi-based relationships.

Further examples include the fact that the naval in the human body divides the average adult body into Phi-based proportions, the neck divides the distance from the naval to the head into a Phi-based proportion, the heart muscles in the left ventricle are made up of a series of spirals that repeatedly contract to a point that is approximately .618 of the long axes from the aortic valve to the apex, and so on.

In fact, Leonardo Da Vinci depicted the general external Fibonacci relationships within the body of man in one of his most popular drawings entitled “Vitruvian Man." 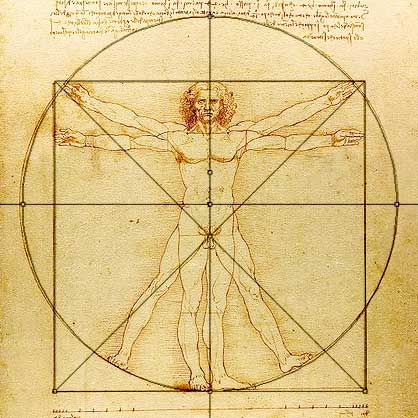 In 1941, Elliott stated, regarding the financial markets, that ““[t]hese [Fibonacci] ratios and series have been controlling and limited the extent and duration of price trends, irrespective of wars, politics, production indices, the supply of money, general purchasing power, and other generally accepted methods of determining stock values.”

In recent times, we have seen evidence that Phi even governs man’s decision making.  As discussed in my last article, social experiments have been conducted which resulted in price patterns, based upon a mathematical standard, that mirror those found in the stock market.

Therefore, there is significant evidence that behavior and decision making within a herd and on an individual basis displays mathematically driven distributions based on Phi.

This basically means that mass decision making will move forward and move backward based upon mathematical relationships within their movements.  This is the same mathematical basis with which nature is governed.  The same laws that were set in place for nature also govern man’s decision making en masse, and on an individual basis.

Now we know that movements in markets occur within waves, as discovered by R.N. Elliott, and we know that decision making and changes in trend are governed by Fibonacci mathematics and the properties of Phi. So, how do we apply this to our own trading to generate profits?

Stay tuned for next week’s installment when we begin to move into the meat of Elliott Wave analysis, followed by our own discovery we call “Fibonacci Pinball.”