There are certain perspectives that are so ubiquitous that it would be considered blasphemous to ever oppose them.  Two of the most common are that fundamentals direct the stock market and that you cannot fight the Fed.

While I have provided much evidence and explanation as to why the former is a falsehood, I have also provided you proof that central banks are not in control as much as many seem to believe.

In fact, we often hear discussions about the PPT – the Plunge Protection Team.  So, what is this “Team?”

After the market crash of 1987, President Ronald Reagan created the President's Working Group on Financial Markets to recommend solutions for enhancing U.S. financial markets, preventing significant volatility, and maintaining investor confidence. The group consisted of the Secretary of the Treasury and the Chairmen’s of the Federal Reserve, the Securities and Exchange Commission and the Commodity Futures Trading Commission.

Thereafter, this “Working Group” became known as the Plunge Protection Team, and many believed that this “Team” would intervene at the appropriate moments to prevent significant volatility in the markets, which would, thereby, prevent market crashes in the future. As the myth has been perpetuated, it can supposedly do this by convincing banks to buy stock index futures, or by having the Federal Reserve do the buying. The goal was supposedly to allow markets to correct in an “orderly” fashion so as to “maintain investor confidence” in our equity markets.

Since 1987, I don't think that anyone can fool themselves into believing that we have not experienced periods of significant volatility, despite the PPT/Central Bank being "on the job." In fact, the following instances are just some of the highlights of volatility since the supposed inception of the Plunge Protection Team:

Based upon these facts, you can even argue that significant stock market "plunges" have become more common events since the advent of the Plunge Protection Team, especially since we have experienced more significant "plunges" within the 20 years after the supposed creation of the "Team" than in the 20 year period before.

Moreover, I have outlined in the past that central banks are not even in control of their own currencies, despite strong belief to the contrary.

Moreover, I also want to remind you that I maintained this expectation when the Fed was throwing their QE bazookas at the market. For this reason, almost all market participants at the time were quite certain that the dollar was going to crash. http://www.hussmanfunds.com/wmc/wmc100823.htm

So, most viewed my call for a multi-year rally in the dollar as ridiculous, and that is putting it mildly.

So, even with all that QE being thrown at the dollar, we still saw the massive rally in the DXY that I was expecting. Yes, this was certainly counter-intuitive to common market expectations. But, this was a clear case study in the fact that the fundamentals or the Fed did not control this market, while market sentiment was the clear driver of price, as our analysis of market sentiment kept us on the correct side of what was an "unexpected" market rally.

Moreover, as the Fed began rate hikes, many were certain that it will be a catalyst for the dollar to rally strongly. However, I was looking for the dollar to enter into a multi-year pullback once we struck our long-term target. Now, despite the Fed raising rates, once the market slightly exceeded our long term target (the high struck in the DXY was 103.82, whereas our target from 2011 was 103.53), the DXY began to pull back as we have expected. Yet, most who believe that the Fed controls this market seem to be in disbelief, as the DXY "should" have been rallying when the Fed was tightening.

The same has happened with the Chinese Yuan. By the middle of 2017, China spent 1 trillion US Dollars (a quarter of their FX reserves) over the prior 3 years in an attempt to prop up the Yuan. However, the Yuan still lost close to 14% of its value against the USD over this time period.

Ultimately, when truly tested, as in the situations above, the markets have moved completely opposite the "manipulation" attempts by the central banks. They have proven themselves powerless in the face of market forces. Ultimately, the market will do what the market will do despite the actions of the Central Banks. Believing otherwise is ignoring the truth in the market as presented by history and price action, and replacing it with the logical fallacy that correlation equates to causation. But, I can assure you that those that maintain these fallacious beliefs will feel significant financial pain when the next crash does occur and the Fed will be powerless to stop it.

So, of late, we are seeing yet another example of how the Fed and the market seem to be at odds.  I want to show you a few charts over the last several months during which the Fed was raising rates.

First, in October of this year, I posted my TLT chart regarding an impending change of trend in the TLT.  For those of you that may not know, the TLT is the iShares 20+ Year Treasury Bond ETF, which seeks to track the investment results of an index composed of U.S. Treasury bonds with remaining maturities greater than twenty years.  So, as you can see from the attached chart, I was looking a bit lower in the TLT before a strong expectation of a turn higher in this fund.  Moreover, when price in the TLT turns higher, it means rates are turning lower.

Now, in November, you will see that we hit my “Major Support” target in the TLT.  But, as I explained to our live video members, I thought we would get one more lower low.  In fact, I noted that I was going to be a buyer at the 113 region in the TLT, with my longer-term target represented by the box in the upper right side of the chart.  Again, take note that my expectations was that we would see a rally off this support region.  Moreover, consider that this was during a period of time in which the Fed was quite clear of its intentions to continue raising rates.

If you take a look at the chart as it stands today, we got that lower low in the TLT, and the market then reacted quite strongly to the upside.  And, interestingly again, this was during a period of time in which the Fed was quite clear of its intentions to continue raising rates.

And, if you are still not convinced, well, Elliott Wave International put together a long term study of T-Bill rates between 2000-2012 representing how the Fed clearly follows the market and does not lead.

So, you tell me, is the Fed in control or is market sentiment in control? 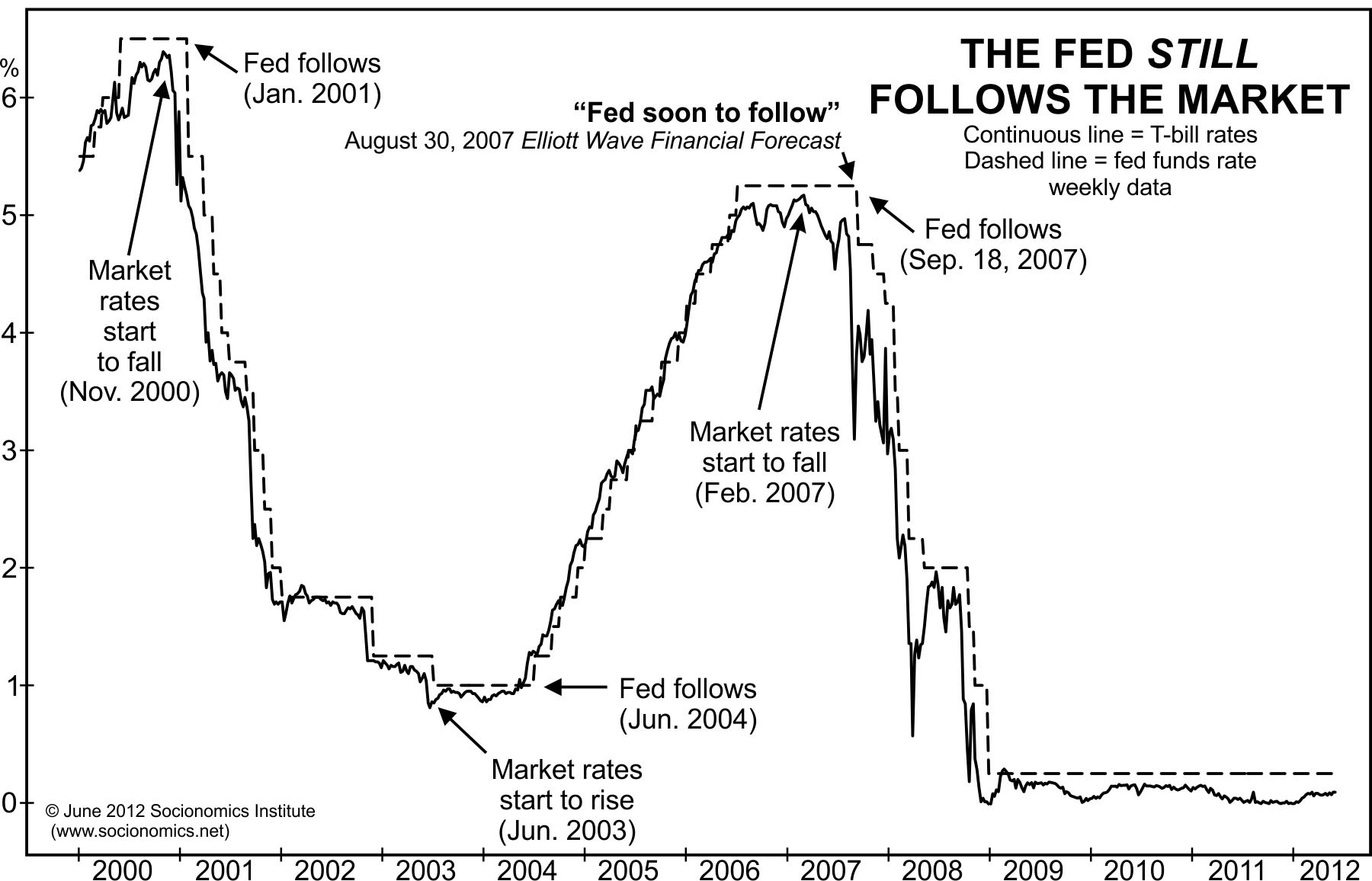