With the higher highs made today the market has given me the minimal suggestions I needed to consider that we have completed a potential b-wave bottom, and that higher highs are certainly possible now.  But, that does not mean I am willing to aggressively trade for those higher highs, as there is still significant amount of risk within this region, as I have been warning to both sides of the trade.

Early this morning, when the market made a higher high, I sent out the following Wave Alert:

I now have a reasonable 5 wave move up in the SPX, which has opened the door to a higher high.  This would be wave i of wave c in the green count.  But, I still have the issue with the ES looking like only a 3 wave move.  The ONLY way I see to reconcile the two markets is the red count presented on the 60 minute chart at this time.  But, it also suggests that the next pullback can be a long trade for those brave enough to take it.

I am not saying one has to be long this market with this set up, but I am saying it now has become a much more reasonable attempt.  Furthermore, we will be moving up our stops as the market moves higher off the next pullback and we will need to remain nimble in case the red count does rear its ugly head. Again, I view the long trade as somewhat dangerous, but it is a reasonable probability for at least a nice trade, as long as you recognize the risks involved and are able to be very nimble.

At this time, I am still of the belief that individual stocks will likely outperform the market on the upside, should we continue to higher highs.  That is how I am personally playing for any further rally.  But, at the same time, I am cognizant of the red count on the chart, which could even consider todayâ€™s high as the top of the red wave ii.

Along these lines, I also sent out the following Wave Alert as a follow up:

As the market is moving up to complete a 5 wave structure, I am not going to tell you anything you already don't know.  We still have two strong potentials on the chart, and the question now is if we are going to a higher high in the green count.  I am clearly expecting a pullback now that we are completing the last 5 wave structure.  Ideally, I still think we get a corrective pullback, and then we go up one more time, still unsure if it takes us to a higher high just yet.

But, the MAIN point I want to make about being nimble is that if we break this week's lows at any point in time, my target becomes a minimum of 2008SPX, with the more likely potential of heading down below 2000 for just wave iii in red alone.  I don't want anyone maintaining blinders on here or wearing rose colored glasses that higher highs are in the bag.  Know your stopping points on your trades and adhere to them.

I have added the last paragraph in bold at this time.  While it is now quite reasonable that the market is going to want to push to a higher high, I want everyone to be aware of what a break down now means.  Furthermore, until 2098SPX is broken, we do not even have a signal that this move up this week has completed, even though we have a minimal 5 wave pattern already in place.  So, while I do expect a pullback, I need to see 2098SPX, followed by 2091.50 SPX taken out as support.  At that point, we can determine how the decline is taking shape to see if it is impulsive or correction.  But, until those supports are broken, the last rally has shown us that the market is willing to provide extensions beyond the standard expectations we normally have. 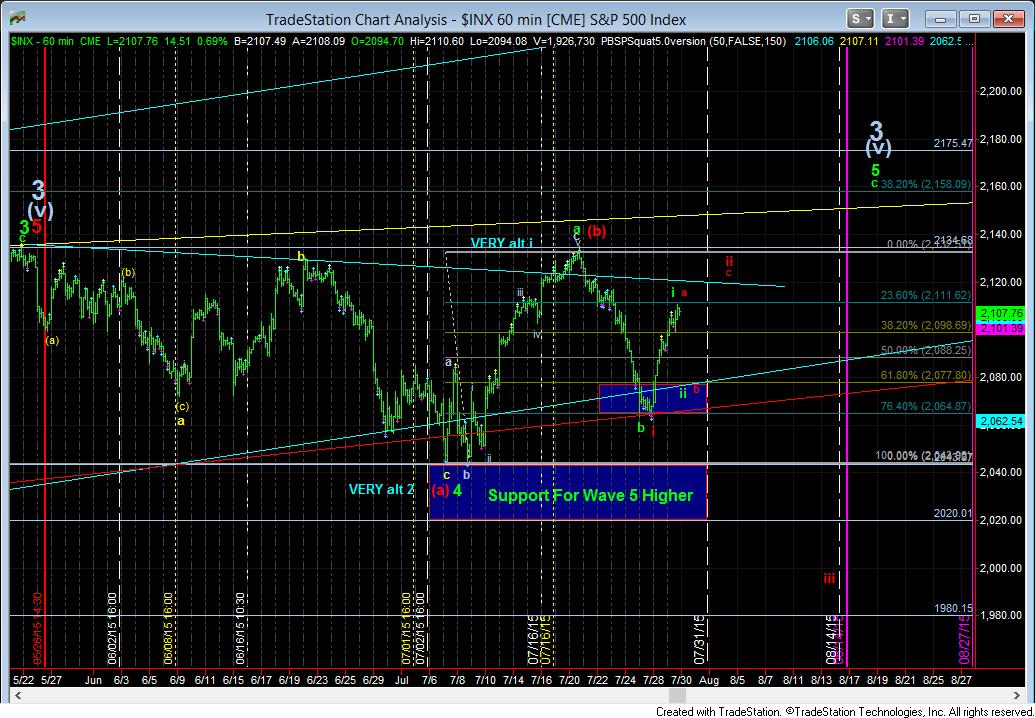