I wanted to put this together for new folks coming on. We haven't had too many come on since the trial but we are holding steady over 200 people. So, I want to have this to point to. So here goes:

As I said in the webinar this is an uegulated market (though now partially) and probably the most high beta asset you might find besides options. So, try to give yourself emotional and financial room in each trade. I also advise generally keeping very little of your assets in the market until you get comfortable. This is also a market that never sleeps. We often wake up to people using the term bloodbath regarding cryptos, only to see the losses erased in a couple days to a week. OK sometimes a month: ) Pure volatility. A traders dream. A noob's nightmare. Do Start SMALL.

A Bit on Exchanges

99% of the trades I suggest can be taken on Bittrex. Many here have come to favor it. The only active position that is not on Bittrex is IOTA (IOTABTC), but I plan to manage that one out until a deeper correction where we enter. It can be found on Bitfinex but they will no longer accept Americans. Coinstop in Australia has it. They will accept Americans, but note it is not FINCEN registered. (nor was Bitfinex). I personally trade on several exchanges and segregate my strategies, but Bittrex is where most of us are now trading actively it seems.

It is a bit hard to get into wallets here but you might get familiar with their use and any tech questions like managing wallets, can be answered by techier people in the room than I. But many of us believe the future of crypto trading is on peer to peer decentralized exchanges, where you don't give up your assets to a custodian. It is being built as we speak. Regulated, centralized exchanges will probably always exist. Wallets will be the future base for our assets.

There are two purposes of the porfolios/trades I post. The Swing trade and two long term portfolios. I purposely structured them so you manage your own risk but receive a 'statement of relative risk' from me. This means swings have 1/2, half, 3/4, full. You can judge what that means to you. These are aggressive trades. If you are long term focused, you might up the ante on these a bit. Or, you might ignore swings altogether.

The LT portfolios (token (or small cap) and big cap) have cash positions. The reason is because I only want to load the truck at LT supports. The relative cash gives you a clue on my take. I will take shots at positions above supports, but keeping a lot of cash. I have not mixed the two to keep them separate in my own mind for organization. But also, it gives people a chance to decide for themselves how much to risk in small cap, ultra high beta coins, versus big caps.

Regarding my own trading. I have a pretty smooth equity curve for a crypto trader, I think. I only buy small caps with big cap profits, not new money. But they soon, over time take over. I started July after our big correction with 90/10 small big, now it is 60/40. IMO there is no need to risk a lot on the small stuff. They do their work without big bets.

Further, the small caps have very new counts which are less reliable. I have to change my view frequently. This can cause consternation if you are overweighting. If you aren't, meh switch some things around and move on. I really advise putting more in the big cap. I generally have far more confidence on where they are going.

Finally, decide if you want to swing or play long term.

In my own trading my mindset is 80/20 swing to LT. I make a regular income in cryptos and so am short term focused. And, I take long term coins I want to hold and forget about and put them in wallets on my machine, hardware wallets and Gemeni and Coinbase/GDAX which have deposit insurance.

If you want to play long term be sure to be prepared to take heat. And, keep cash for opprortunity.

Probably the biggest question I get is supports. Honestly I've flubbed a bit in the LT supports. Early on I treated them as swing trades and they hit supports. But that isn't being long term focused. Further, sometimes they hit my generous support and I look at the market and still have a bullish take. With swing trades a tap or move below a support is a warning. If it retraces and breaks again, it is a real break. Take ZECUSD recently. It hit my support, and went a bit below but caught a bid. I didn't pull the trade. On the second try it ran right through. Now we're out. And, it is going deeper. With LT supports its very different. I've very careful to pull a position. They are small anyway!. Rather, it may mean I need to look at the count again. If definitely bearish, then we pull it.

What will happen in the LT porfolio is at major tops we'll have a big cash position. Right now we are in the middle. We could go lower or run. The patterns are the most nebulous I've seen. Even in my own trading I've started to swing less and protect profits more. This is where we are. But there will be a time, when we arrive at clear targets where we will raise much cash.

Note that I have a watchlist I am trying adjust as we go. The reason for the watchlist is I found myself bogged down by requests, most of which were not quality for EW analysis and I found myself doing too many 5m analysis jobs which will create problems. With the new data feed and Motivewave, I'm looking to expand it. But note my only measure for a good coin is solid EW patterns. I can't offer more than your average TA analyst with a coin that isn't clear. So, the watchlist (current version attached) has vetted and constantly revetted.

I'm also trying to measure skew on these positions so that we are maximizing profit. Further, without clear EW patterns you can be assured the equity curve will be wild. I personally use EW to structure my trades and my curve is pretty darn smooth and produces regular income. That is one of my goals..trade with as much of an edge as possible.

That also means, I ignore many of sudden spikes we get with little clear setup. I also don't bet on projects and teams as much as I'm truly interested in these projects because they are interesting, and encourage continued discussion about them. But that's not trading to me. I know some disagree. I'm OK with it. I know what this approach has done for my PnL.

I hope this answers some questions thoughts if not verbose. But I had many of these questions over the last month. 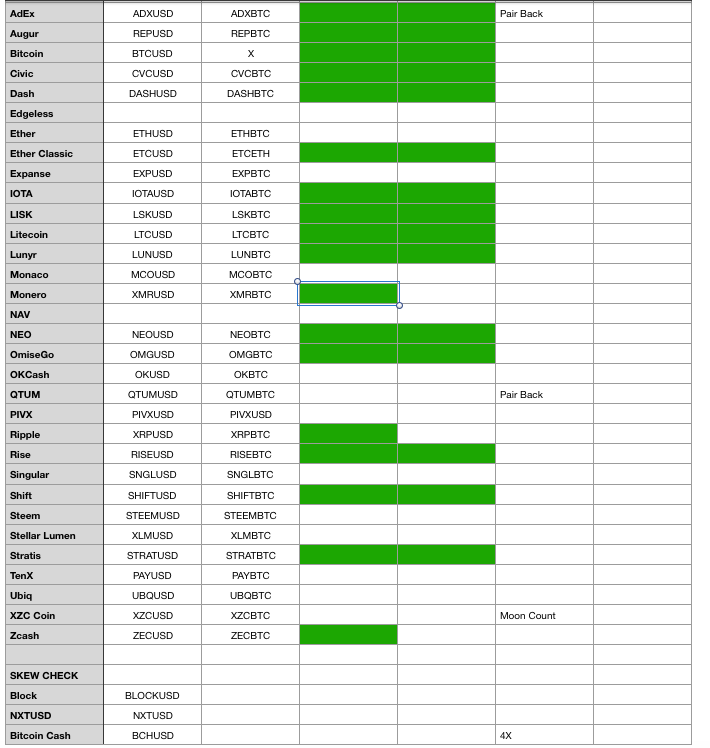