Before I had to the airport in a bit, and the market is slow, I wanted to take this time to do a little bit of education on how I spot diagonals. This is very pertinent to our current crypto market. Many of the new alt tokens have moved into this mode after failing support for iv of iii and sometimes iv of 3. See illustration. Discovering when the first impulse is a diagonal in disguise is tough because we have no price history, but this is the process I use.

For those new to the site, we have objective measures for our wave counts that have been tested over time in our Fibonacci Pinball method developed by Avi. So, as a new impulse forms we put it to that test. Many coins we are following are newly released so having an approach is a must.

I really encourage learning fib pinball and there are resources in webinars. I'll help any member interested in diving into the method but you must put the time in. I'll give unsolicited feedback on counts as a means of teaching and refining. I hope no one is bothered. It is meant to be helpful and to raise everyone's level.

As for diagonals, the first sign of a diagonal is a failure to reach beyond the 1.382 off of wave 2. Our fibs are developed by measuring the wave 1 and measuring extensions off 2 with 2 as the 0 point. Ideally a  5 wave move is 2X of wave 1 in log. The third usually tops at 1.618 A failure of a move at the 1.382 is really too short to be an impulse.

But this is not enough. It is a drop past the .5 (again in log) of the length of 3 (move from the 2 to the recent top). If that fails, at least with much more than a spike below that then recovers, I go into diagonal watch move.

The challenge with diagonals is two fold: 1) price action is slow and choppy (sound familar?) 2) standard impulse fibs work less reliable because they are formed by ABC legs They are tradeable but very difficult. Diagonals in cryptos give us some good skew. The easiest way to trade them is to focus on the C waves which follow a standard impulse structure, usually. Sometimes they are ending diagonals themselves.

Note that we also need to watch the .764 where 2 of even the diagonal can fail. If so, we have a bear market. EOS is a recent example, where I 'turned off' counting because it was pointless. We had a coin which began and remains in a bear market.

I hope this is helpful. If any questions please post. I'll be heading to the airport so will be out of pocket for a bit. 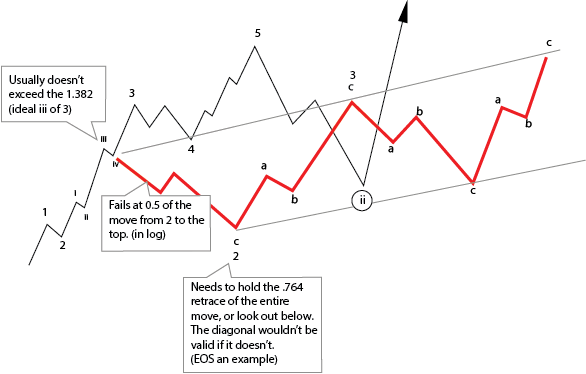