Matt of the Sawdust asked me a question last night about how to use fibs in corrections. Here's shot at simple explanation.

The base difference in fibs between an impulse and a correction is symmetry versus extension. In a corrective pattern, the third wave or 'C' usually is limited to .764 to 1.382 of A the first wave. With perfect log symmetry being 1.0, it 'revolves' around that number. If corrective the '4th' wave which turns out to not be a fourth wave either overlaps the 1, or falls below 50% of the third, with holding 38.2% of the the third as ideal. (Some coins like Ether have a tendency to retrace 50%). I do not every call a .618 retrace of a third a fourth. It 'kills' that extension in the third.

Now, there are motive waves where you get a 'corrective' structure. They are diagonals. But they are still 5 waves, like we see in Verge now, if it completes. But internally the subewaves are symmetrical.

So , when looking at corrections you really want to look for those symmetrical relationships and spot where an impulse fails or where your view that a corrective pattern is in play may break down. That's making it practical.

Now, note, that A and C are motive waves within that correction so they can have impulsive structure where the third really extends and separates the 4th and 1st of their subwaves. But A and C themselves usually exhibit symmetry to each other. This also goes for B waves which have an abc internal structure. They are never constructed of 5 waves.

So, when we use a=c, we are talking about that symmetry or near symmetry.

There are other patterns like WXY, which 3X3X3. In this pattern the impulsive C wave is replaced by a 3 wave 'C' called Y. And, in that wave, there is internal symmetry (ABC make the subwaves of Y not 5 impulsive or diagonal waves).

Finally, triangles also are made of symmetrical waves: 5 or 9 corrective sub waves with an ABC structure.

See Zoom in of BTC's internal structure of the A wave and its symmetrical relationships. (I didn't note the B wave but it has it too). When counting the subwaves of a correction you can find these symmetrical relationships to help you label it correctly and find resistance (which is really what matters). I actually found an error in my labelling doing this again. I had resistance right though thankfully.

Note I use this knowledge a couple ways when spotting a bottom. I will lay in a rough fib for that A=C target...then when I get the 1-2 for C, I look for the 2.0 target for 5 of C to be in that box. That is confluence that helps us target a bottom. If that relationship isn't there, I have to watch carefully for something else to happen. Confluence raises probability of an outcome. 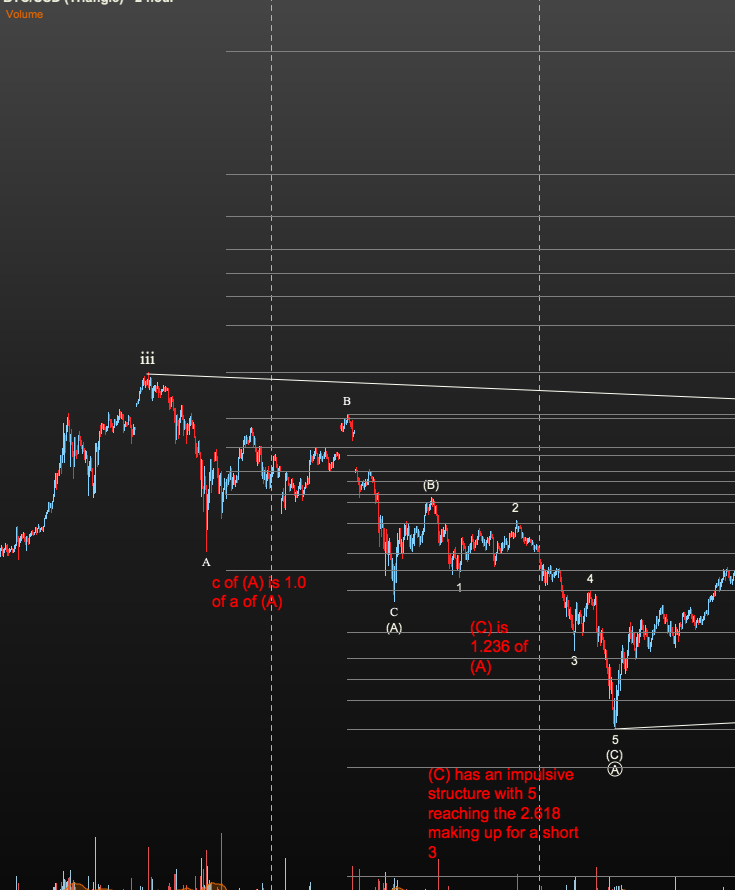