I’m quite new to the cryptocurrency analyst scene.  While I’ve been trading over two decades, it was always a supplemental income. That started to change in August 2017 when Avi Gilburt brought me on staff at Elliott Wave Trader to lead cryptocurrency analysis. In my opinion, I sit as the latest analyst to join the world’s leading  team of Ellioticians, applying the art to nearly all exchange traded asset classes- and now cryptos.

For the first months, my new life was very quiet publicly, until I made a very timely call. In mid October, 2017 I made a call for STEEM, the currency of the Steemit social media site to reach $5, perhaps by January 2018. The price at the time of my post was 92 cents.

A couple of guys from England who host the Cryptonights Video blog on Steemit  saw my post and interviewed me. This is where my work was first thrust on to a somewhat public stage. While I suggest the timing  was intuition, I stood by the price target which was an important fibonacci level in my Elliott Wave count for STEEM. STEEM first hit $5 on January 3, 2018. Honestly, it was earlier than I expected. It moved on to top at $9.24 before starting the correction we now find it in.

My original post is here. And, you can see the Cryptonights videoblog interview here.

Shortly after that call, I had made a call for the coin Verge to see a price of $13 from an alt time high of $.35 by 2018. This call was also highlighted on CryptoNights. It was that call, where I had my first run in with overheated sentiment as a public analyst.

After posts on Verge, my Twitter followers had increased by over 300% mostly from bullish Verge holders.  While the unbent bullishness should have given my pause, I held on to my prediction. We soon topped as I had expected. However, over the course of the correction that ensued, we broke levels of support that I did not expect.

Soon, I had to publicly admit that I no longer saw $13 as likely in the near future, or even years. In fact, I saw no more than $2 likely. The change came about both from a break of long term support, and discovery of additional historical data that forced an adjustment to predictions. Forward projections were lowered.

While my predictions were adjusted and I was looking elsewhere for primary small cap holdings, the Verge community held fast to their bullishness. I continued to get peppered with requests for updates on the price. While I remain bullish long term, my new tempered predictions were greeted with hopes I was incorrect.

In late March,  news broke of a new partnership between the Verge team and a large internet transactor.  In the words of the lead developer, this partnership could make Verge a top 3 crypto. And, while Verge seems to have put in some sort of bottom on March 18, 2018, the price structure has not been sound for a lasting bottom. But of course, the bullishness of the Verge continued to grow in the face of poor price action. My view, of course remained unchanged. My previous predictions were a mistake.

During that pre announcement time I discussed the entire price history of Verge, how it projected a possible local top. Then I focused on how the action off the March 18th low was not clearly bullish and definitely not impulsive. We had already seen and once of correction show into the announcement and explained that we likely had more to go.

This thesis of mine proved correct, and as soon as the news broke it fell hard. Verge saw a nearly 50% drop from the pre-announcement high, and has not retraced much of that drop to this day. Price remains flat. I still see potential of another 50% decline from here.

You can see a video of that webinar here.

The partnership announced was with PornHub. Verge coin was going to be integrated into one of the largest adult entertainment franchises on the web, offering its users payment privacy in the proces.  Can we blame disappointment in the announcement on the price fall? Perhaps this could be true on moral grounds for some, but regardless, this is probably one of the largest partnerships in the crypto market, financially. And, since then we’ve seen another partnership emerge. TokenPay which already integrates Verge, cut a deal with a major German bank to create debit cards for various cryptos, including Verge. The deal was signed April 26th, according to TokenPay.

Yet price remains flat to bearish.

What can we learn from this?

I see the preeminence of sentiment in this event. The Verge community has been one of the most bullish communities for their coin, in all the crypto market. Based on my anecdotal read of sentiment on Twitter, they hold in deep corrections, and constantly talk of moon targets, even in the face of weak price action.

If  most potential Verge holders have a full position, who is going to buy more to push it higher? Markets need new money to rally, or they must come down to find buyers. Verge has been seeking lower ground despite bullish news.

Market technicians including Elliott Wave practitioners know that markets climb walls of worry, not euphoria. Euphoria is the emotion of the top, not the bottom of a price range. It is very clear to me that we need some of the Verge community to turn bearish on their beloved coin for a rally to follow.

We see two paths now for that to happen. If we hold the price action into the April 17 high was a diagonal, we really only need a .618 retrace to start to wash out sentiment. This is the wave 2 retrace that always comes before  a wave three rally.  Wave threes are the  largest and usually fastest rally you see in all assets. 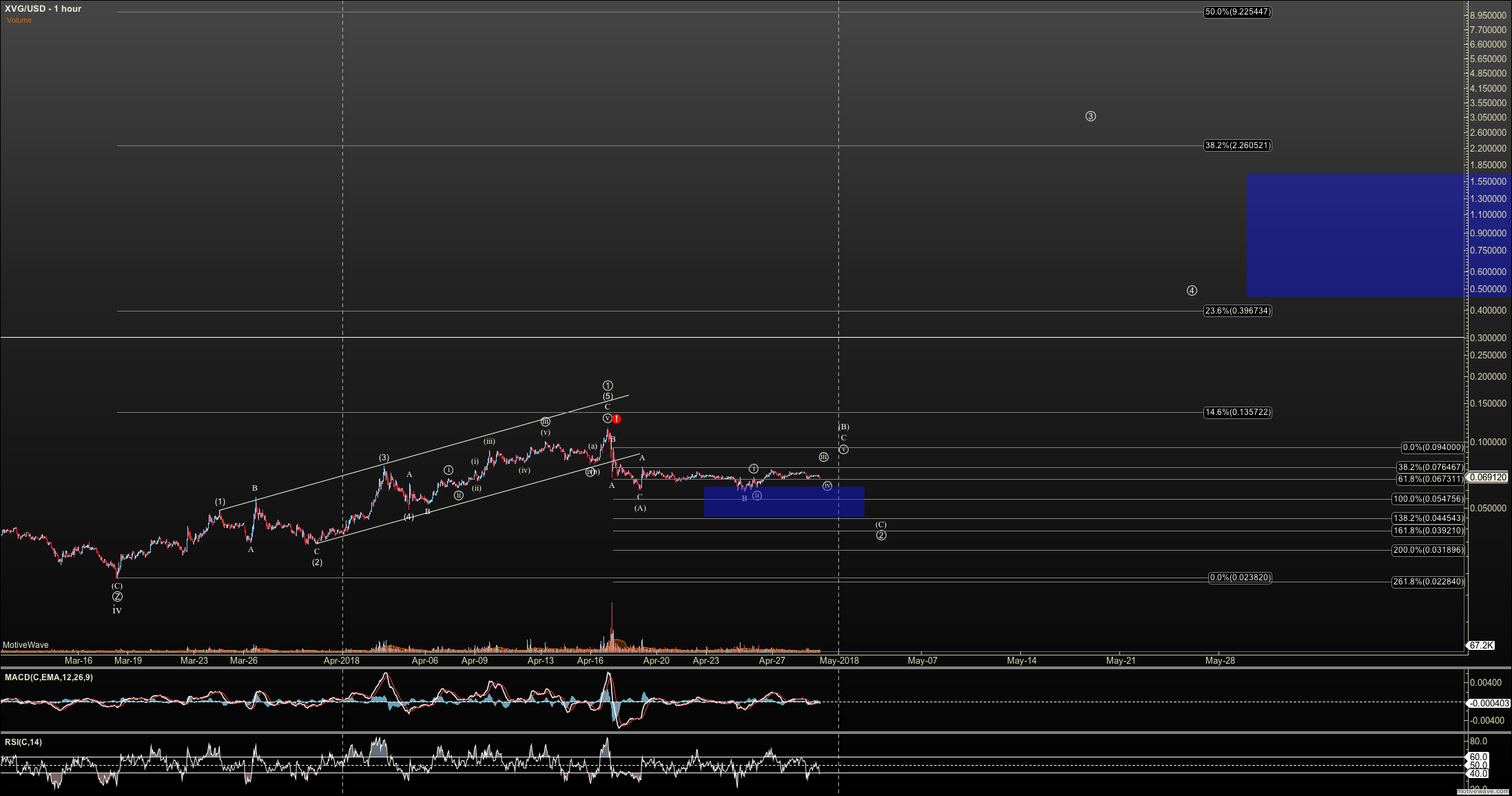 However if support doesn’t hold for that wave 2, which is defined by a break of $.043, we will see much lower. The next level we’d be looking at is the $.009 to $.015 level. This level would be a deeper wave iv on our daily count. I would be surprised if .015 doesn’t truly bring gloom and angst to Verge holders. This is a 98% drop from its all time high!. See zoomed out view. 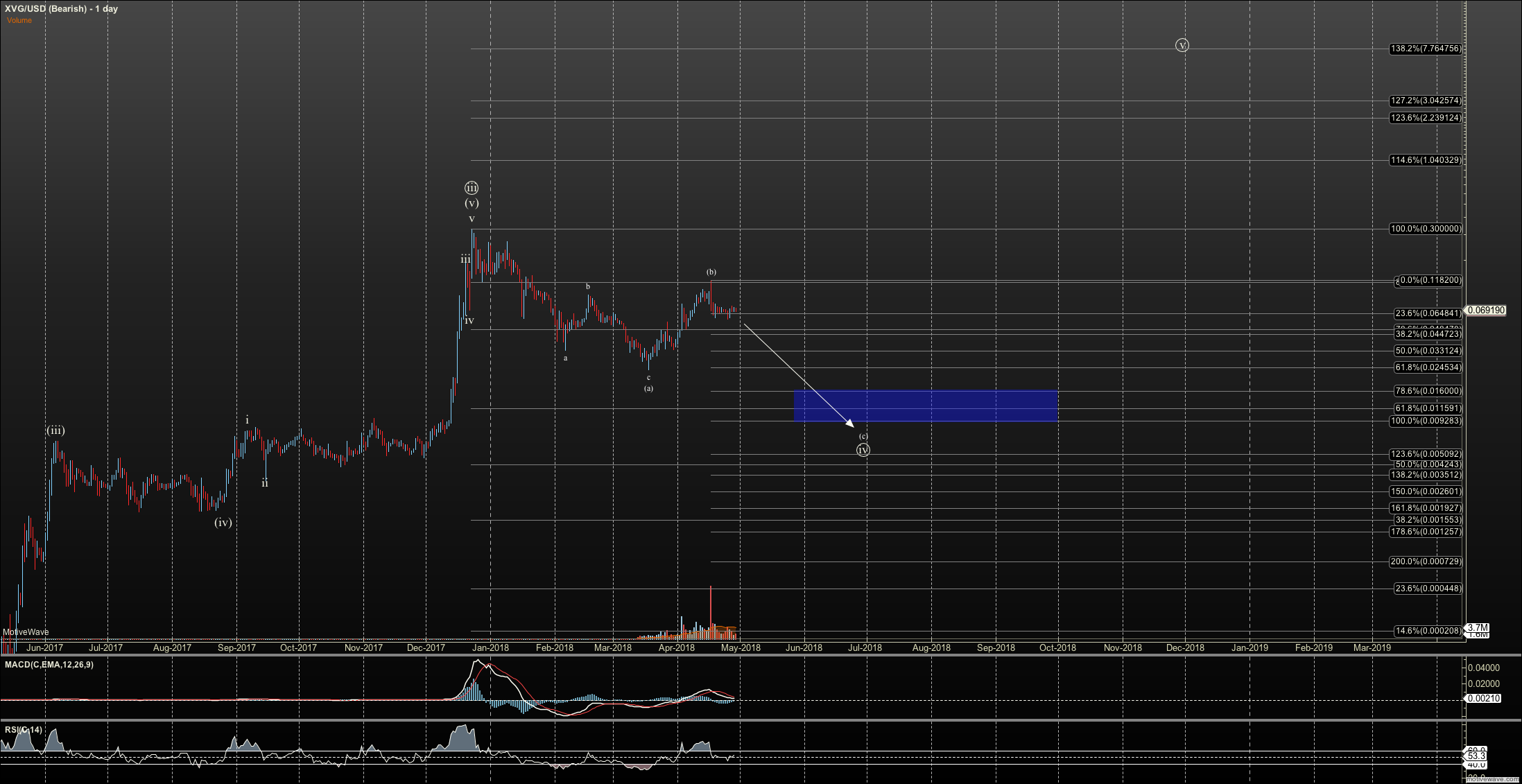 In conclusion, be wary of the bullish crowd in any asset you are excited about. Most likely the bullishness you feel is already priced in, particularly if you are one in a very excited crowd.

I certainly made that mistake earlier in my Verge views. I was not making my view based on news, but the chart, however, the sentiment of the crowd should have had me relook at my charts for an alternate view.  And, price quickly turned on me and I had to take a more bearish view.

On Elliott Wave Trader, we use the Elliott Wave Theory as a lense on price action, to help us discern where market sentiment, and therefore price. While we are not always right in the moment, that lense quickly allows us to course correct, and put our investment and trading dollars into levels where risk to reward is in our favor. Or, we are able to cut risk when we need to. Verge has been a good trade for many of our members who have been around since 2017. But it has been more painful for others who joined later.. While I posted many profitable trades in Verge in the trading room, this course correction was particularly detrimental to my pride and I learned a very important lesson about public sentiment.