DAX: The DAX continued higher last week, following expectations for price filling out wave (c) of b. Price is now testing the 13020 – 13190 target resistance cited for a b-wave bounce off the September low, but with no indication of a local top yet and room up to the top end of that target region if needed. Above 13190 does not invalidate the b-wave, but at that point I would not rule out a new high being attempted above the one made at the beginning of September. Otherwise, a break back below 12835 is needed as the initial indication of a local top being attempted and potential start to blue wave c of B back below the September low. 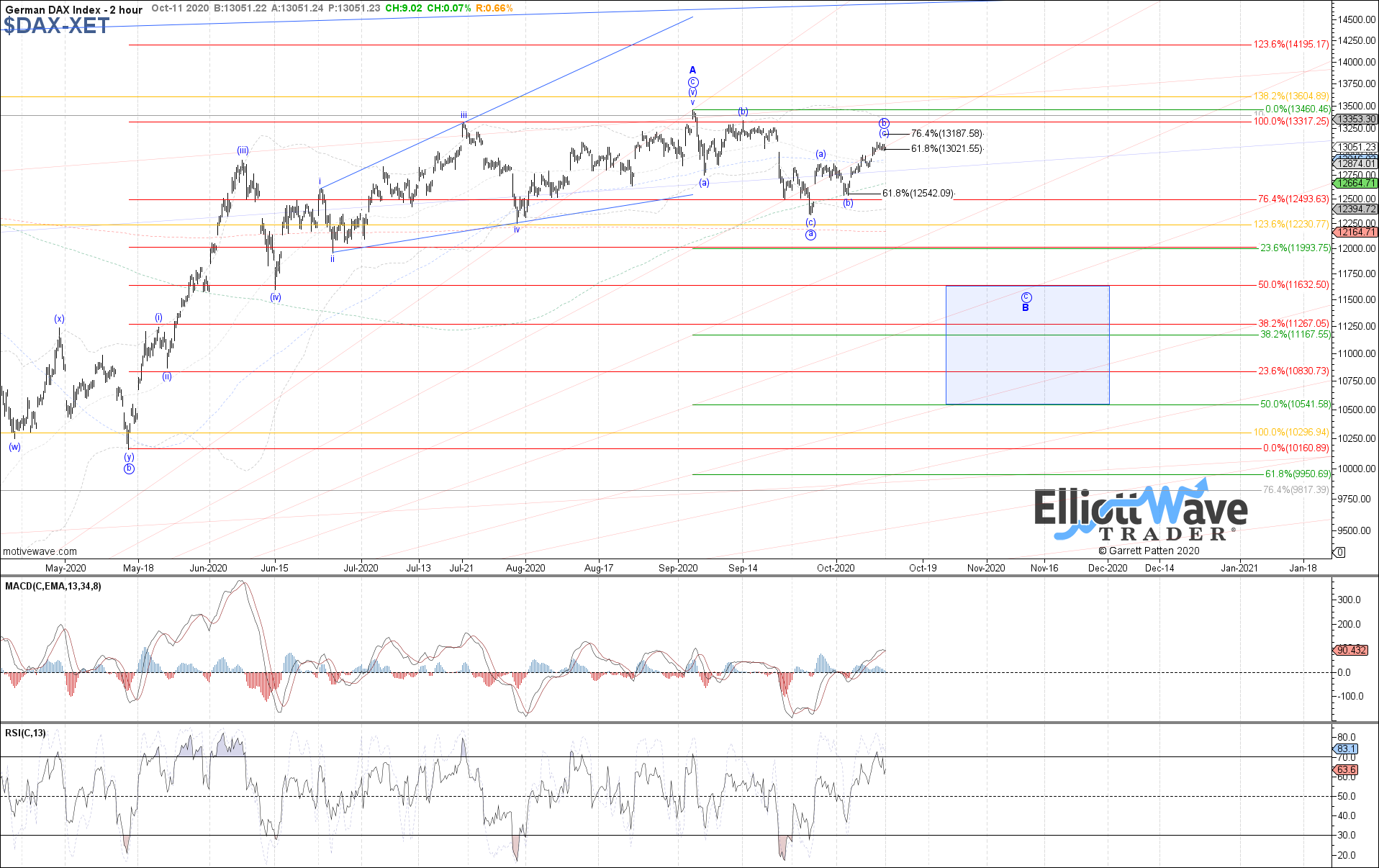 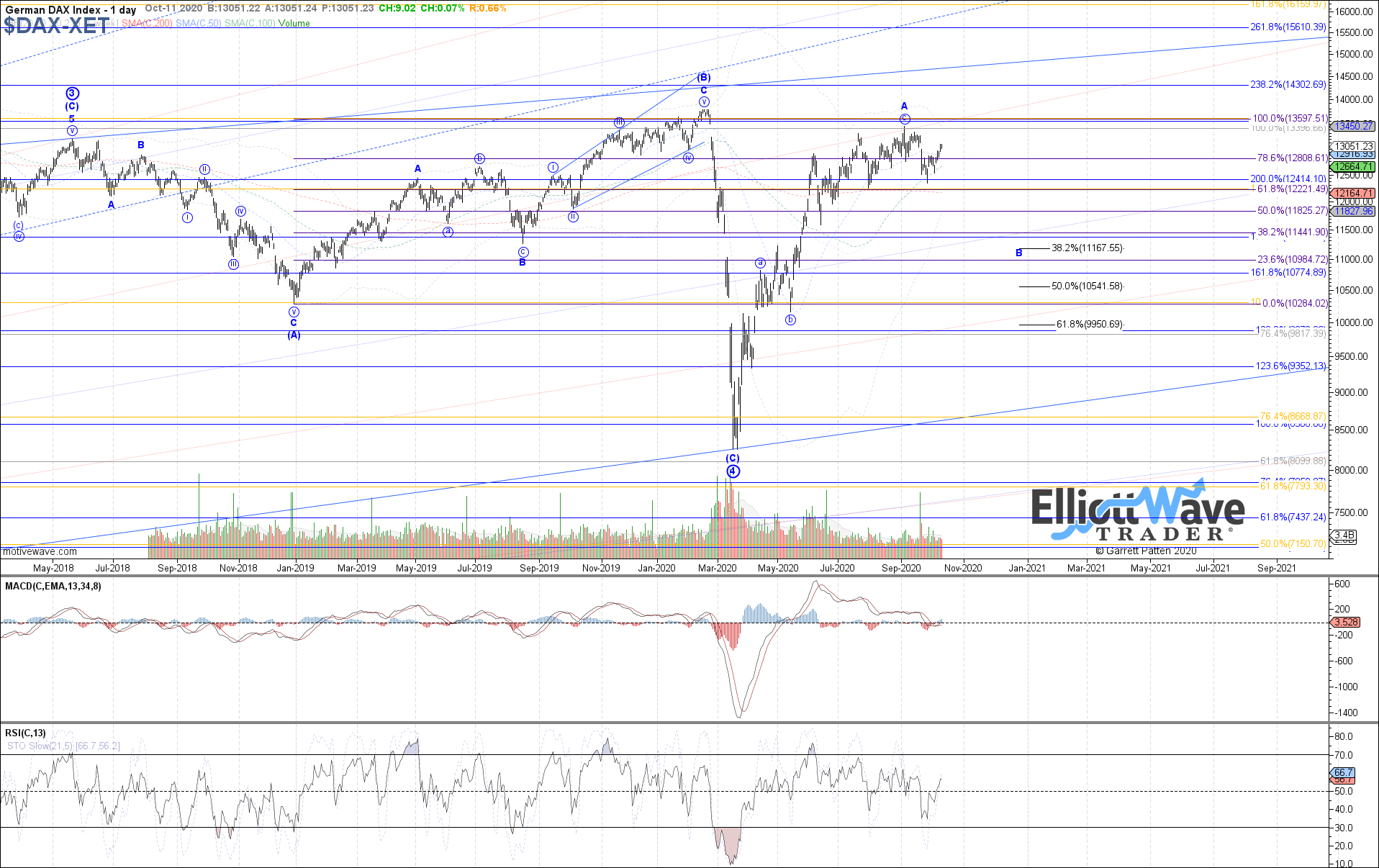 FTSE: The FTSE traded higher last week as well, eventually reached the upper end of the target resistance cited for blue wave b of (v). Therefore, if that count is correct, price needs to turn back down from here and break below 5925 as the initial indication of price attempting to fill out blue wave c of (v) toward a new swing low. Otherwise, a sustained break above 6040 opens the door to the red b-wave instead, with 6135 – 6220 as the next target resistance above. 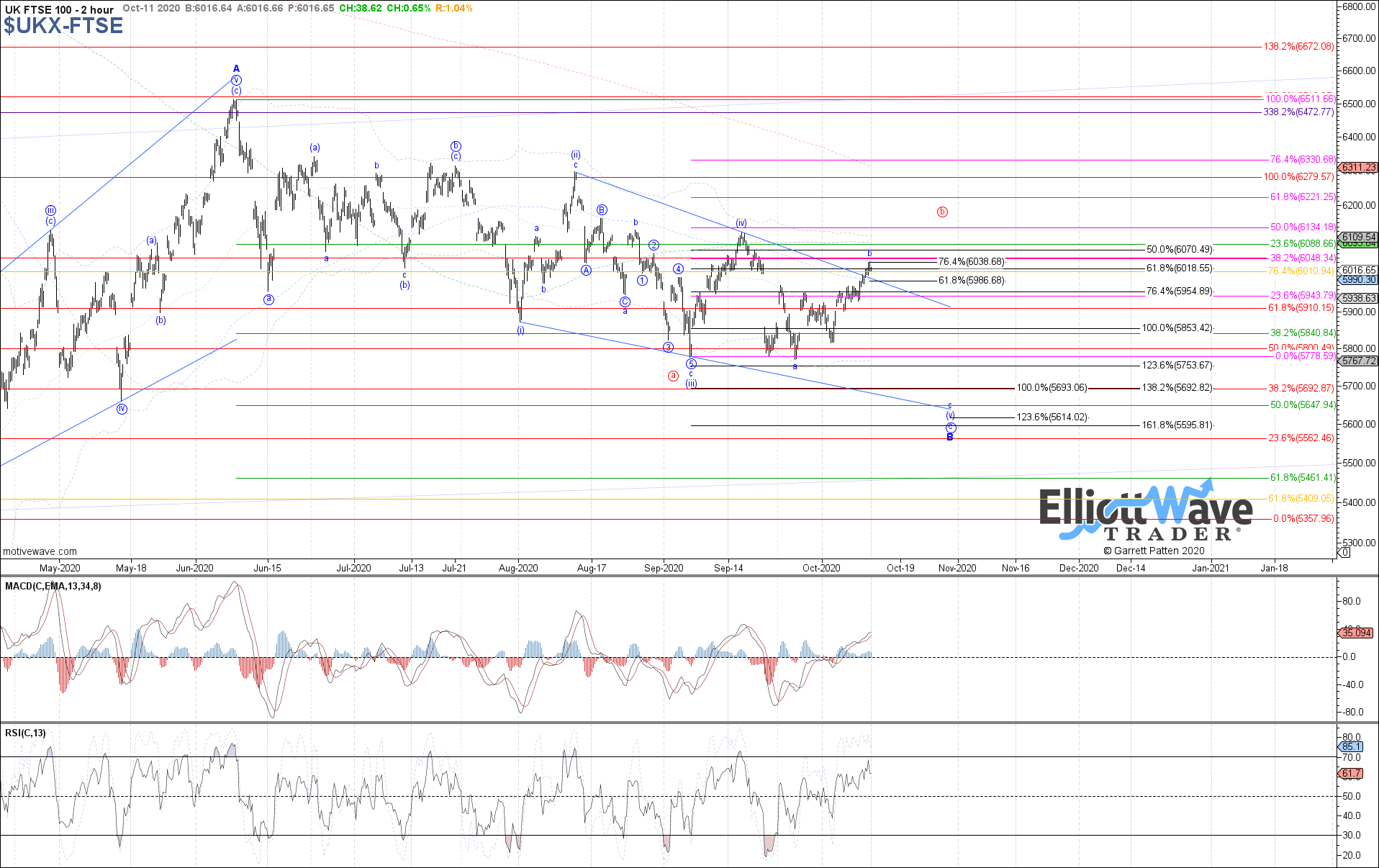 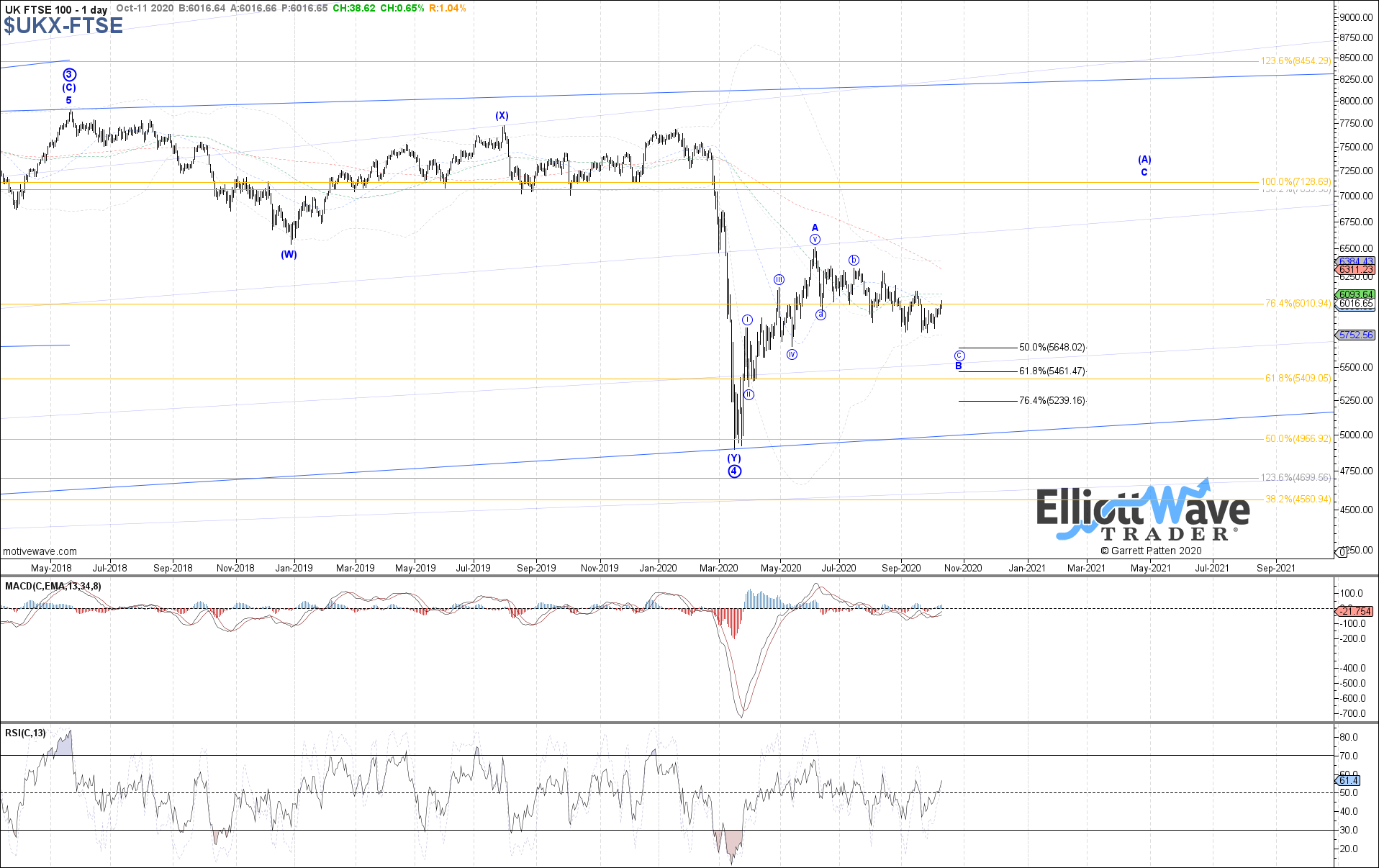 STOXX: The STOXX also continued higher last week, reaching the upper end of that initial target resistance cited if this bounce off the September low is wave (b) of iii in the red ending diagonal C-wave count. Therefore, if following that path, price should turn back down from here and break below 3215 as the initial indication of attempting a local top and starting red wave (c) of iii toward the 3025 target below. Otherwise, a sustained break above 3280 opens the door to the blue wave B as the alternative option, with 3310 – 3365 as next target resistance above. 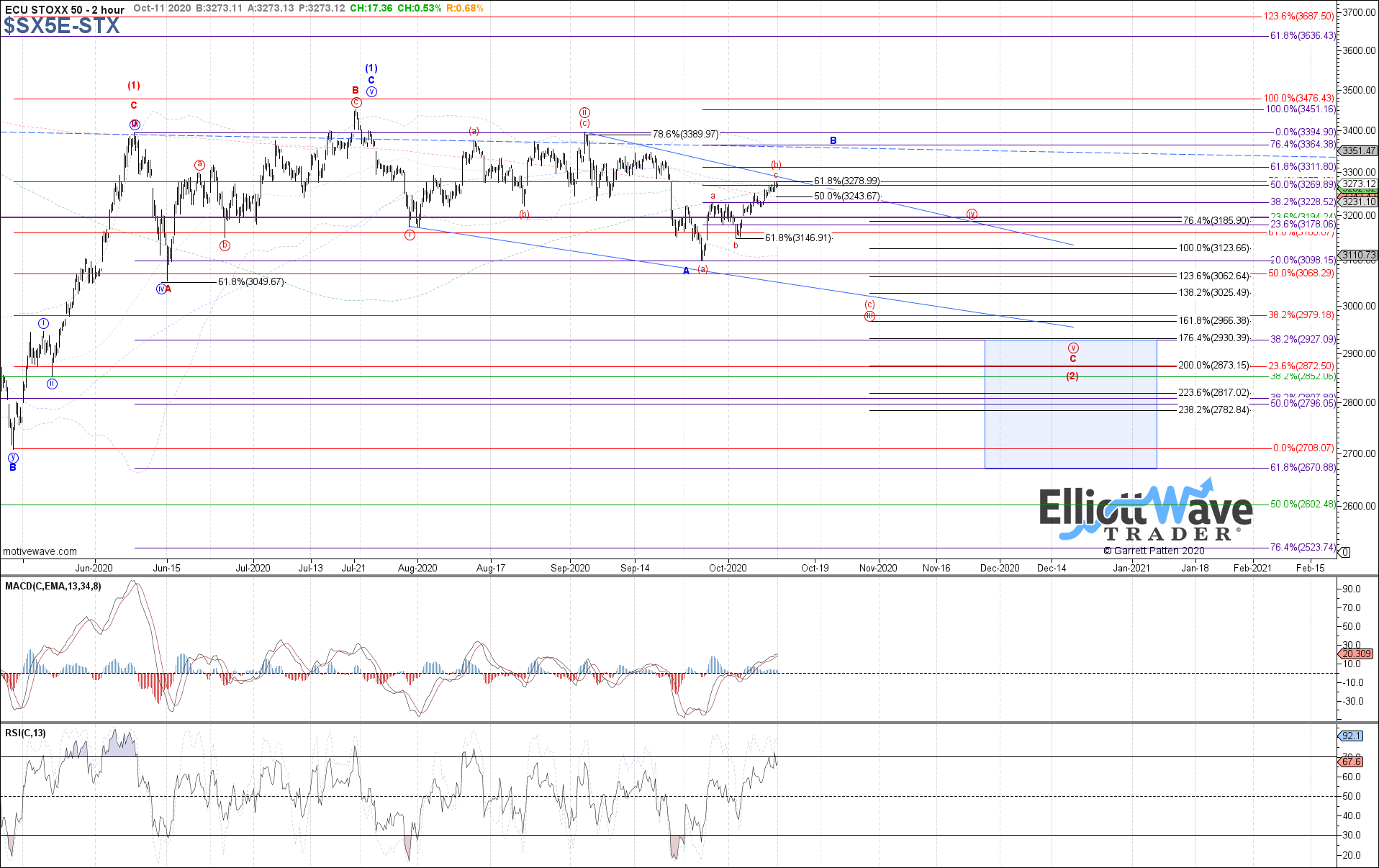 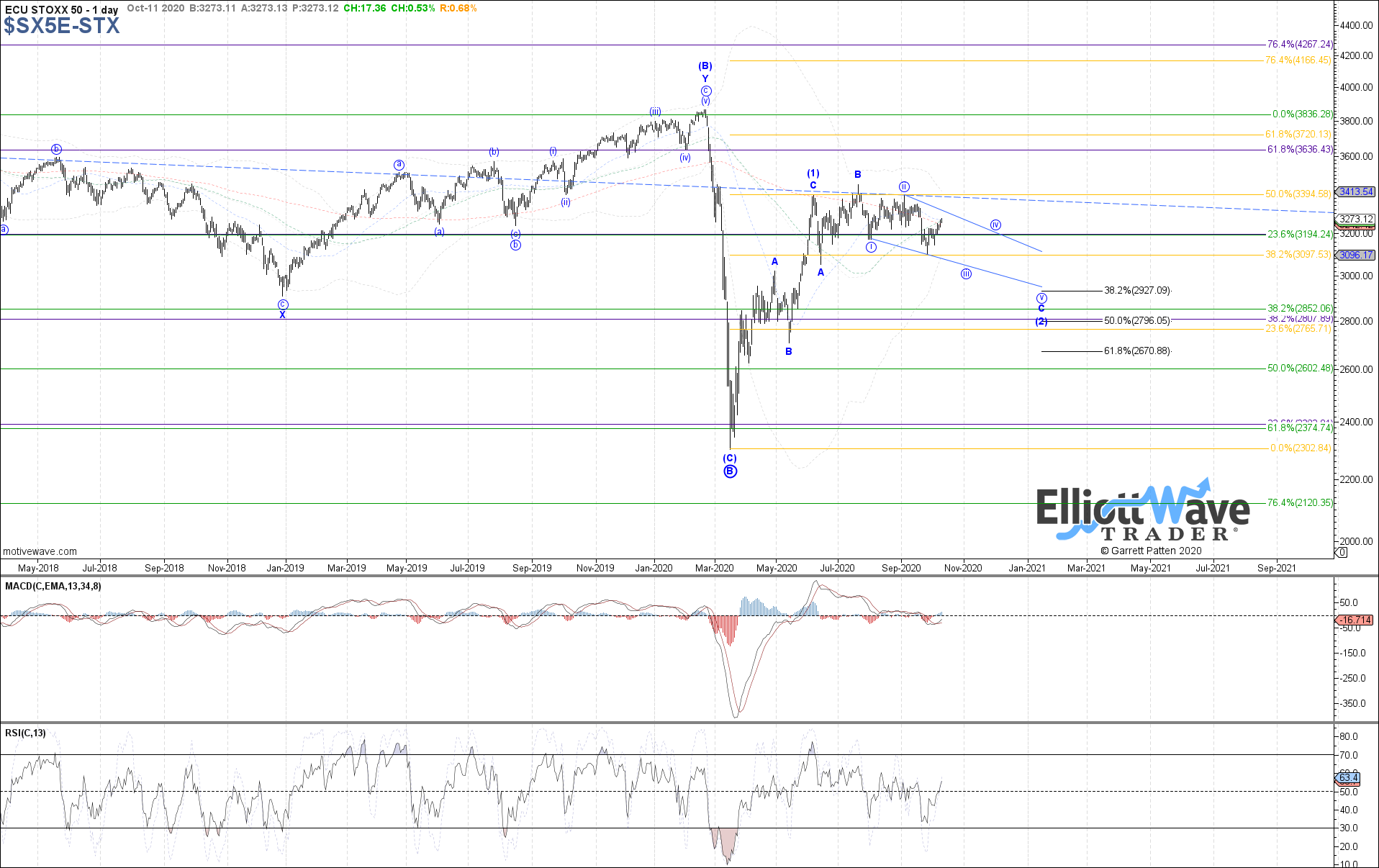 IBOV: The Bovespa bounced higher last week, retesting the high made the week prior by Friday’s close. Therefore, if this bounce off the September low is corrective, likely as a micro 4th wave in blue wave C of (B), then this is where price should attempt to turn back down from toward a new low as a micro 5th wave. Otherwise, further upside does not guarantee a bottom in place, but it does open the door to red wave 5 heading toward a new swing high as a viable possibility. 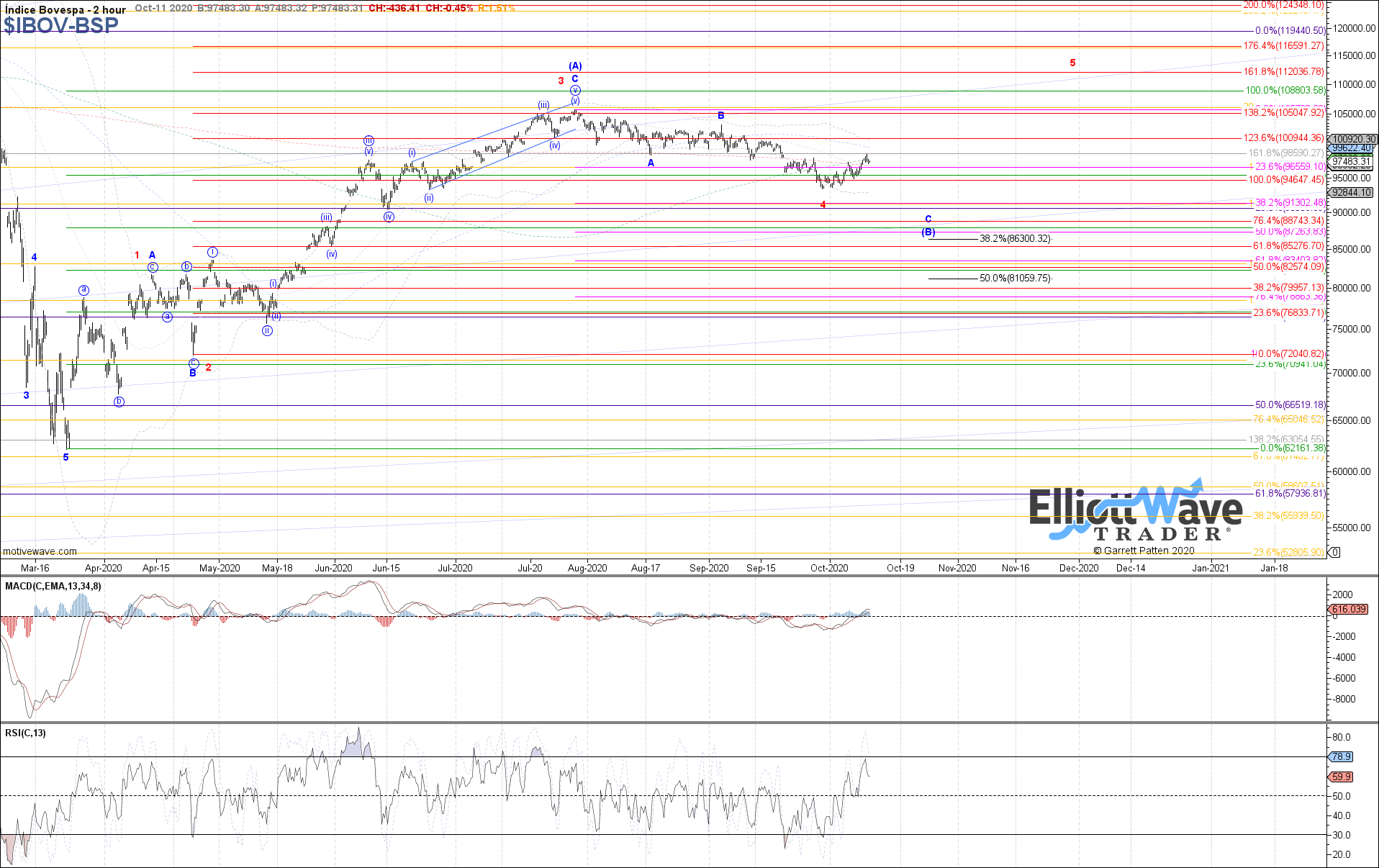 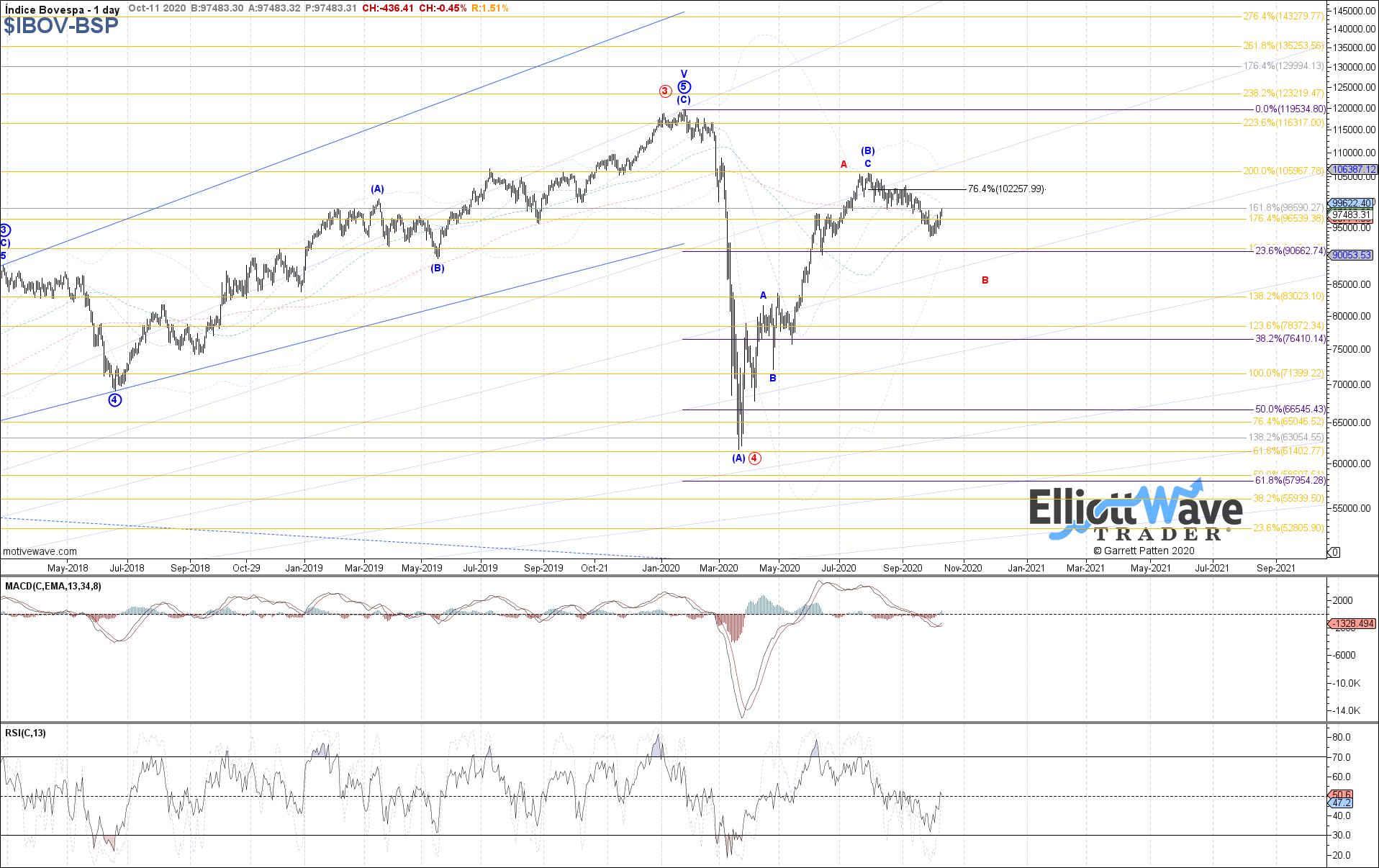 IPC: The IPC continued sharply higher last week, breaking above the September high to confirm either red wave (c) or blue wave iii filling out. Price I now close to testing the initial target for red wave (c) at 38710, but the subwaves off the October low don’t look complete as a micro 5 up yet. Therefore, if price continues beyond that fib resistance, 39300 – 39670 is the next region of resistance to watch. Otherwise, a break back below 37790 is the initial indication of a local top being attempted. 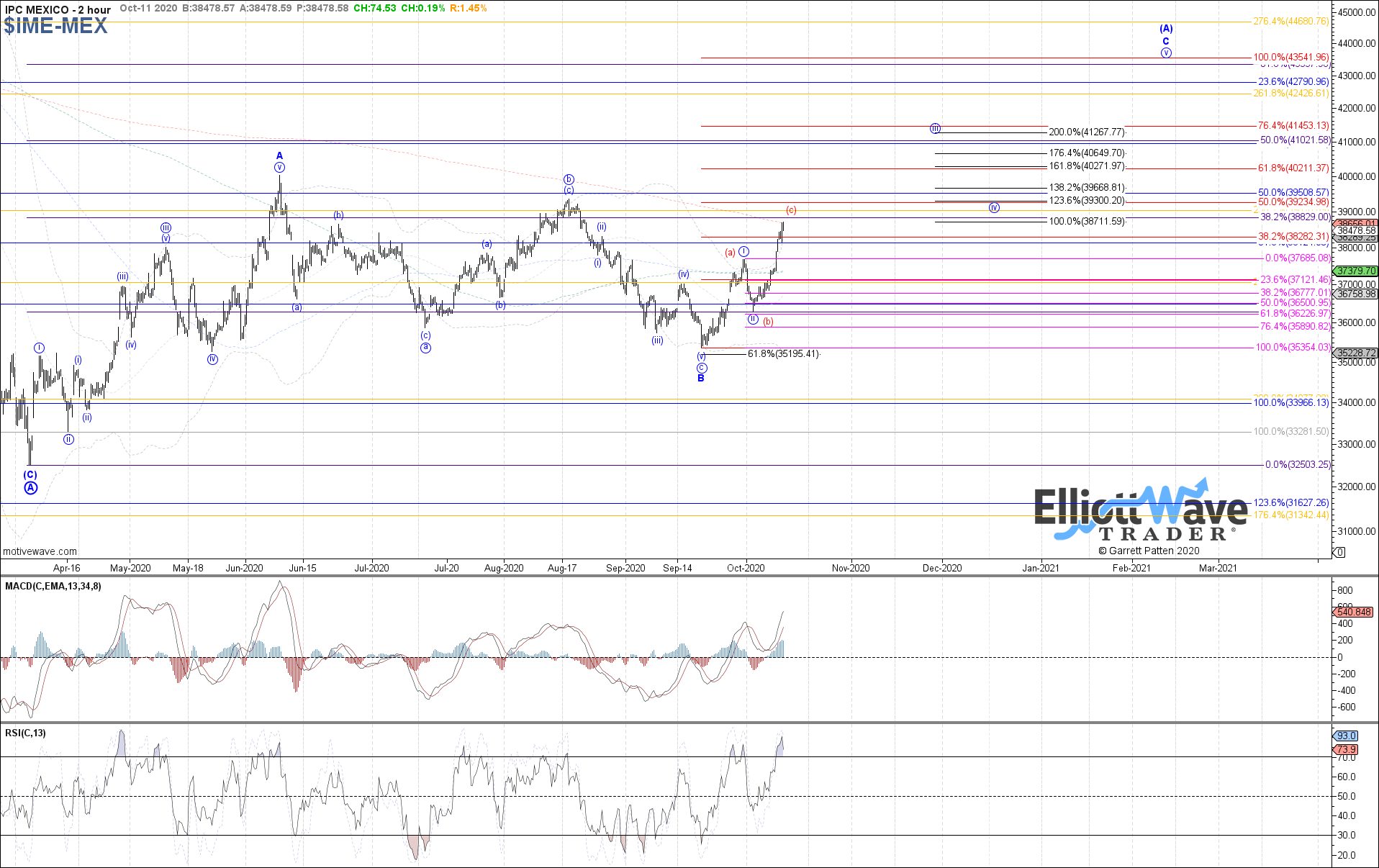 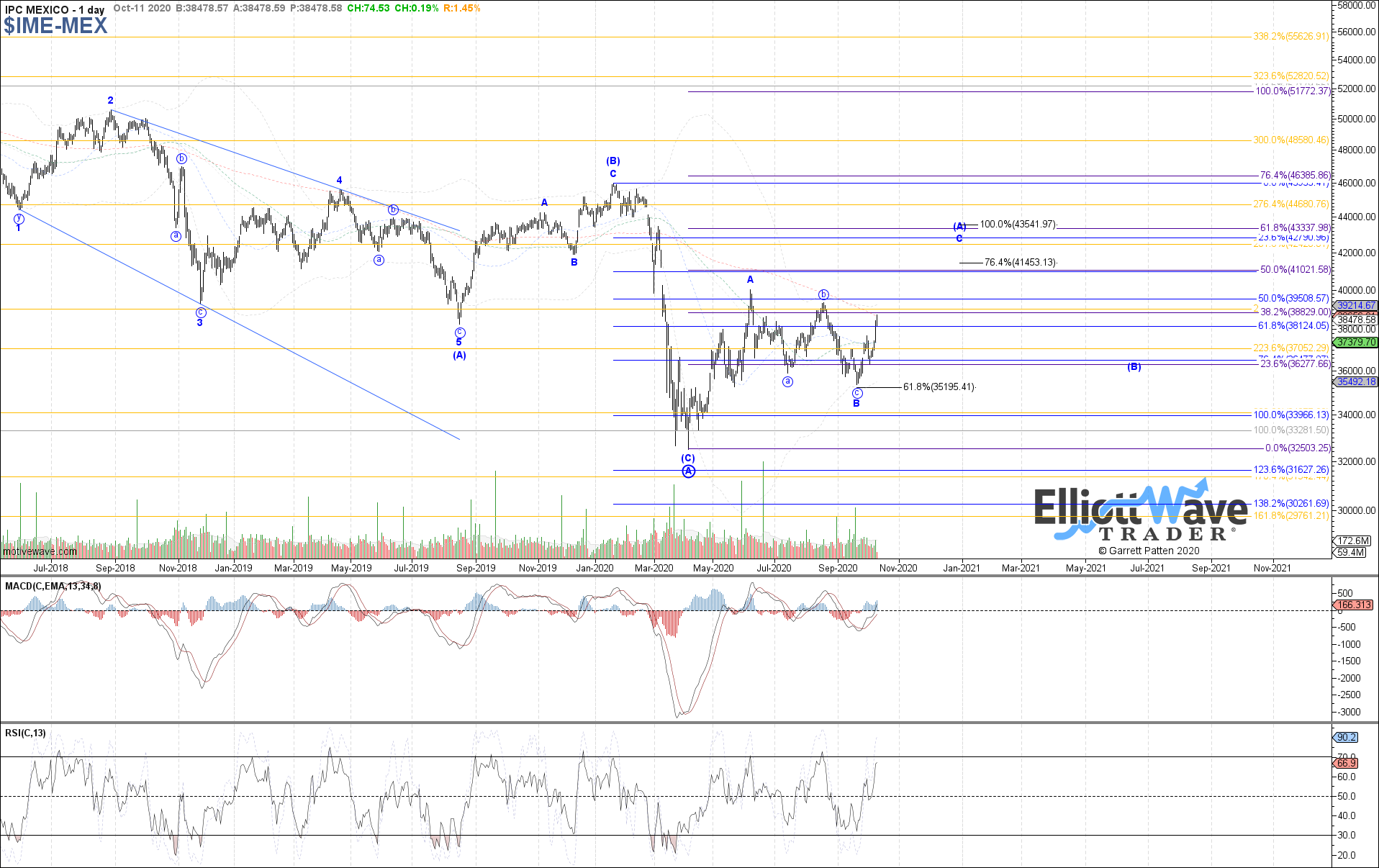