Many of the European and Latin/South American markets we follow reversed lower last week.  Here is a review of the DAX Performance Index, FTSE 100 Index, and Euro Stoxx 50,  as well as the Bovespa Index (IBOV) and IPC Mexico.

DAX: After an initial move higher last week to reach the minimum upside target for wave C of (A) at 11345, the DAX has since reversed sharply lower, breaking the necessary support to suggest a local top in place now. Therefore, the expectations is that price is pulling back in a corrective (B)-wave, with 10500 as the ideal target support below. Under that assumption this should still be the initial wave A of (B) off the high, with room for more near-term downside before attempting a wave B of (B) bounce. 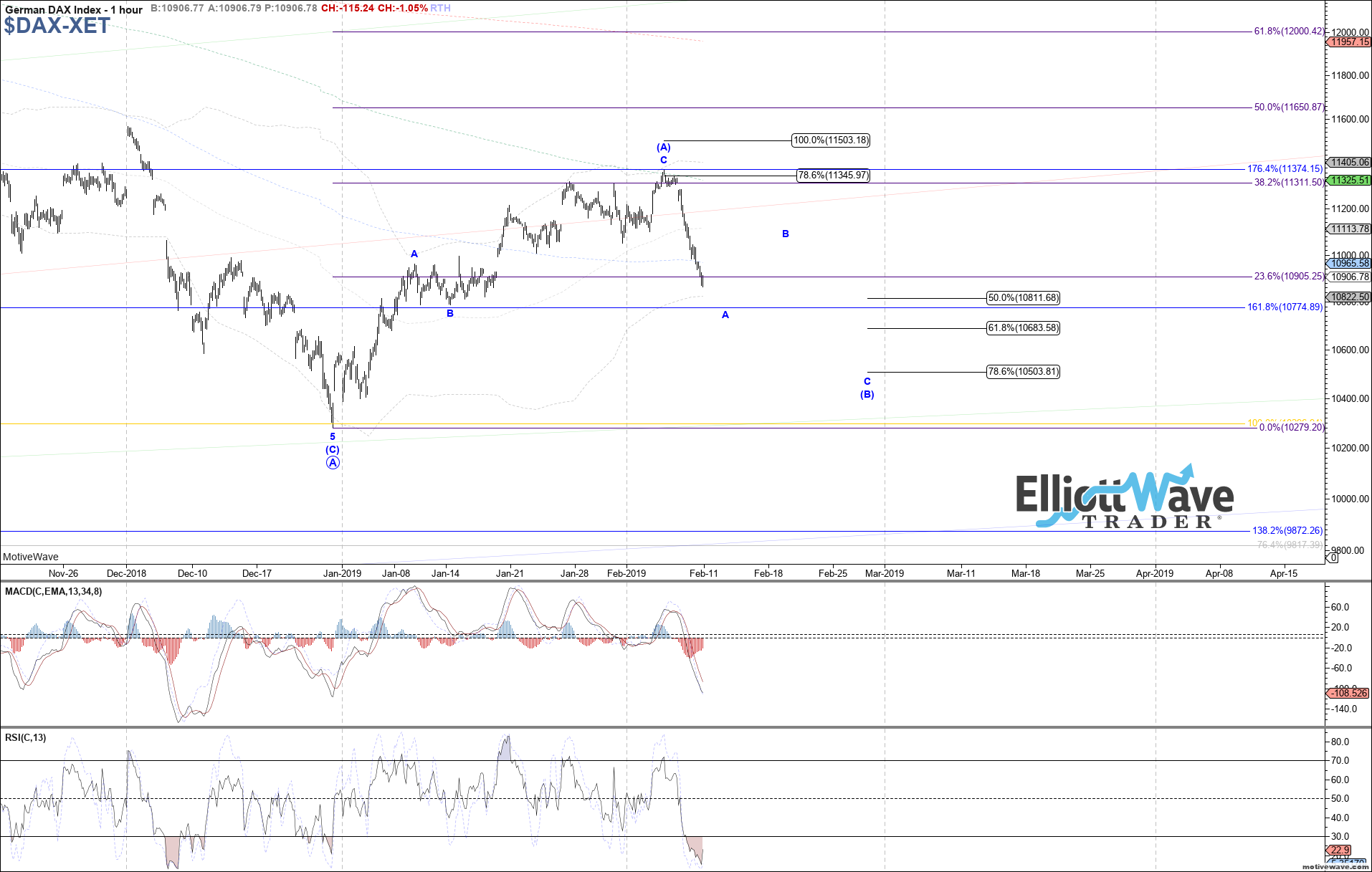 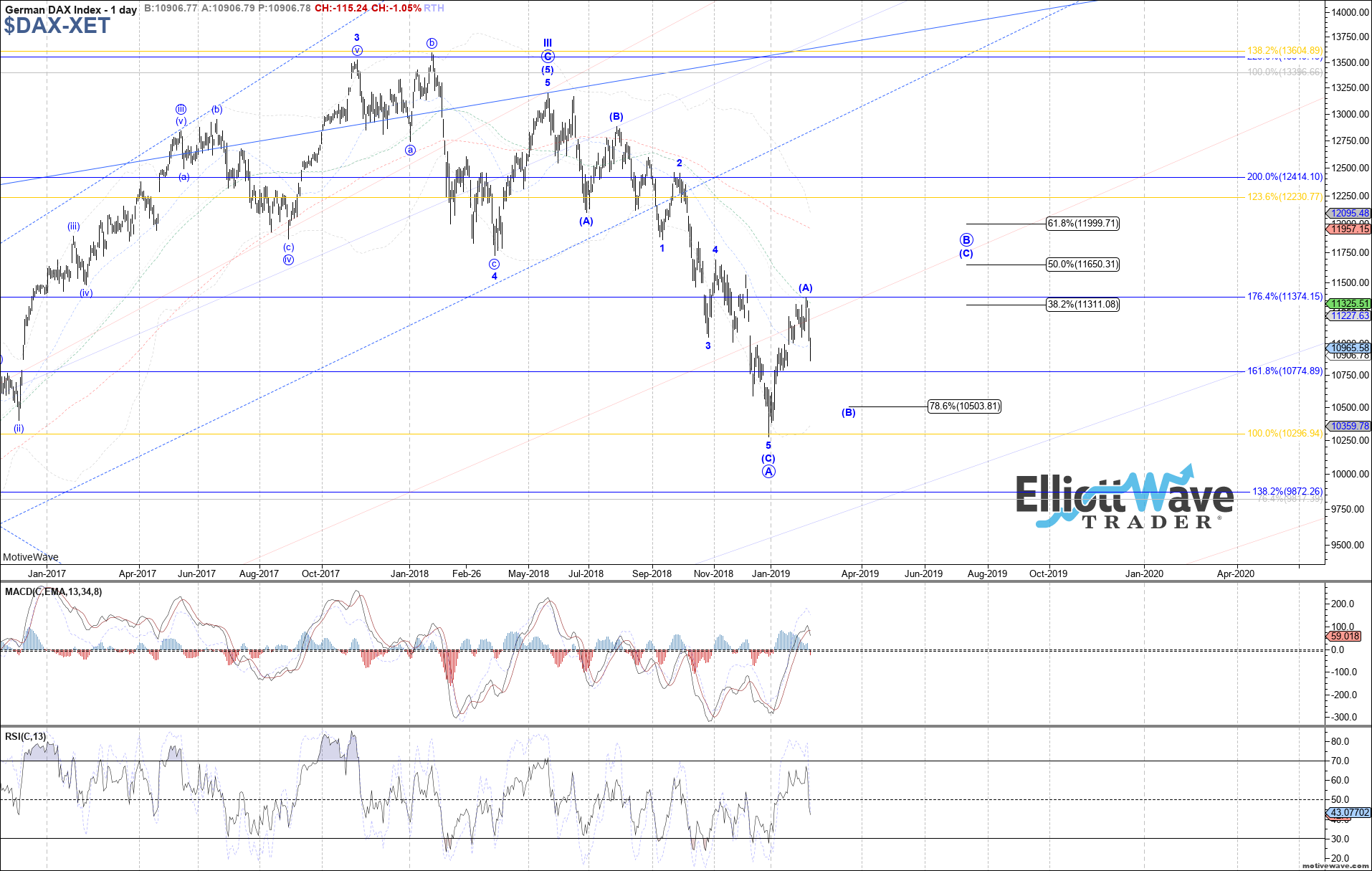 FTSE: The FTSE started initially higher last week as well, almost reaching the measured move target for wave c of A at 7210 at last week’s high before curling back down since. Therefore, the same expectation applies here as well, that price is now pulling back in a corrective wave B of (B), with 6930 – 6775 as the overall target support below. Under that assumption, this initial drop would still be part of wave a of B, with room for further near-term downside before attempting a bounce as wave b of B. 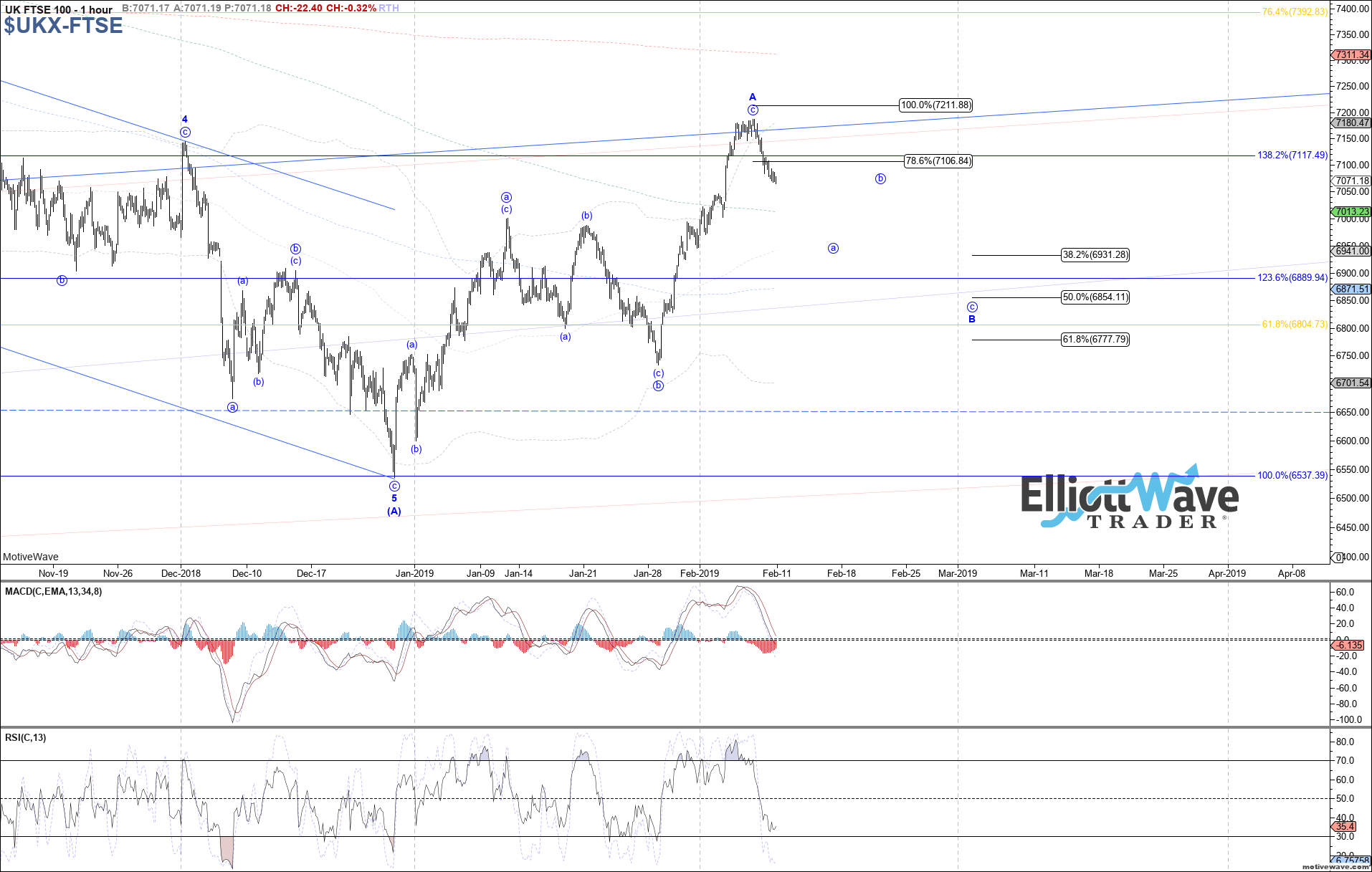 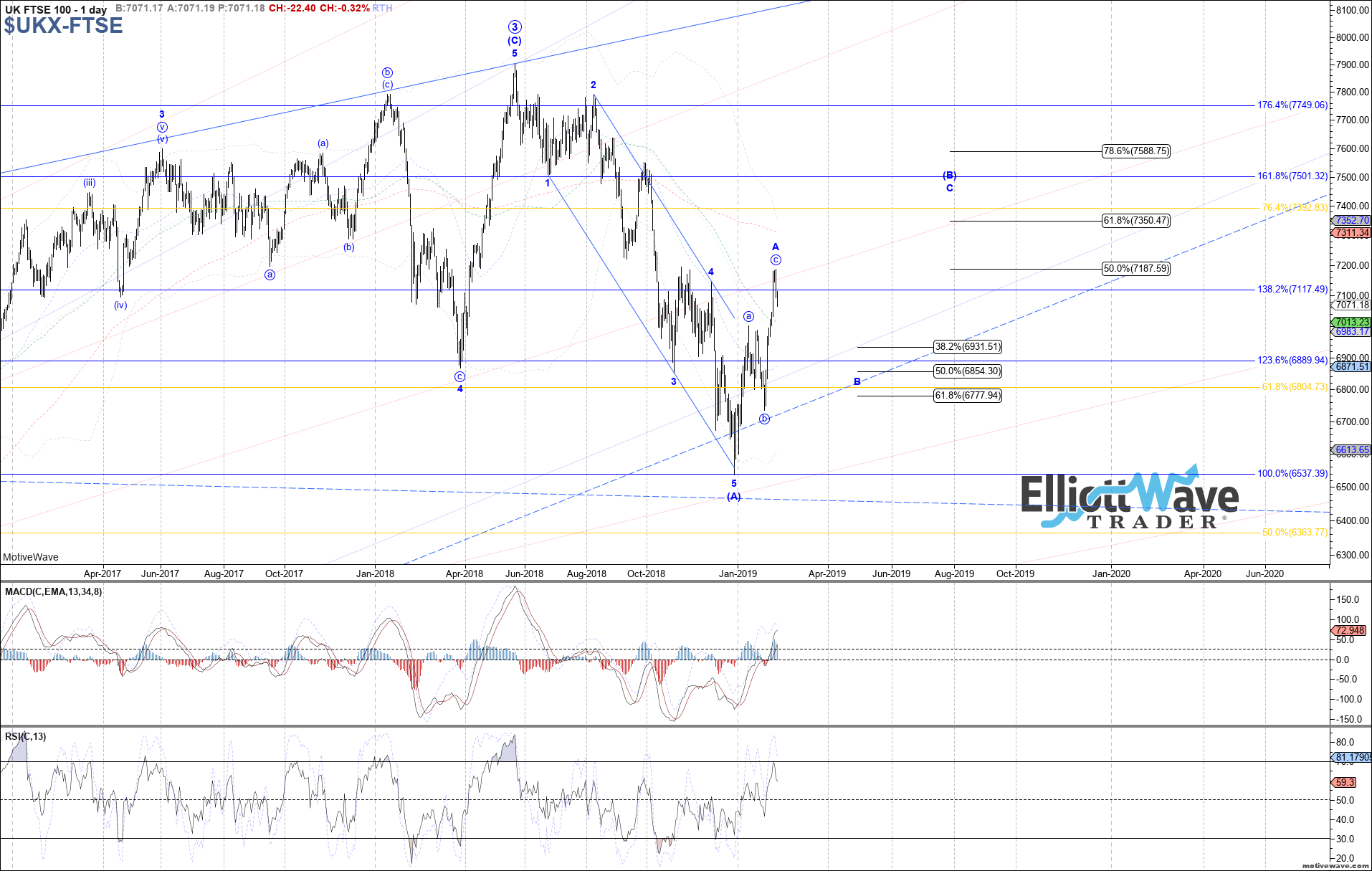 STOXX: The STOXX also traded initially higher last week, and like the FTSE came close to the measured move target for wave c of A at 3225 with last week’s high. Price has since rolled over, breaking enough support to suggest a local top in place and the start of a corrective pullback as wave B of (B). In this case, 3020 is the ideal target for all of wave B, so this should be the initial wave a of B off the high, with room for further near-term downside before attempting a wave b of B bounce. 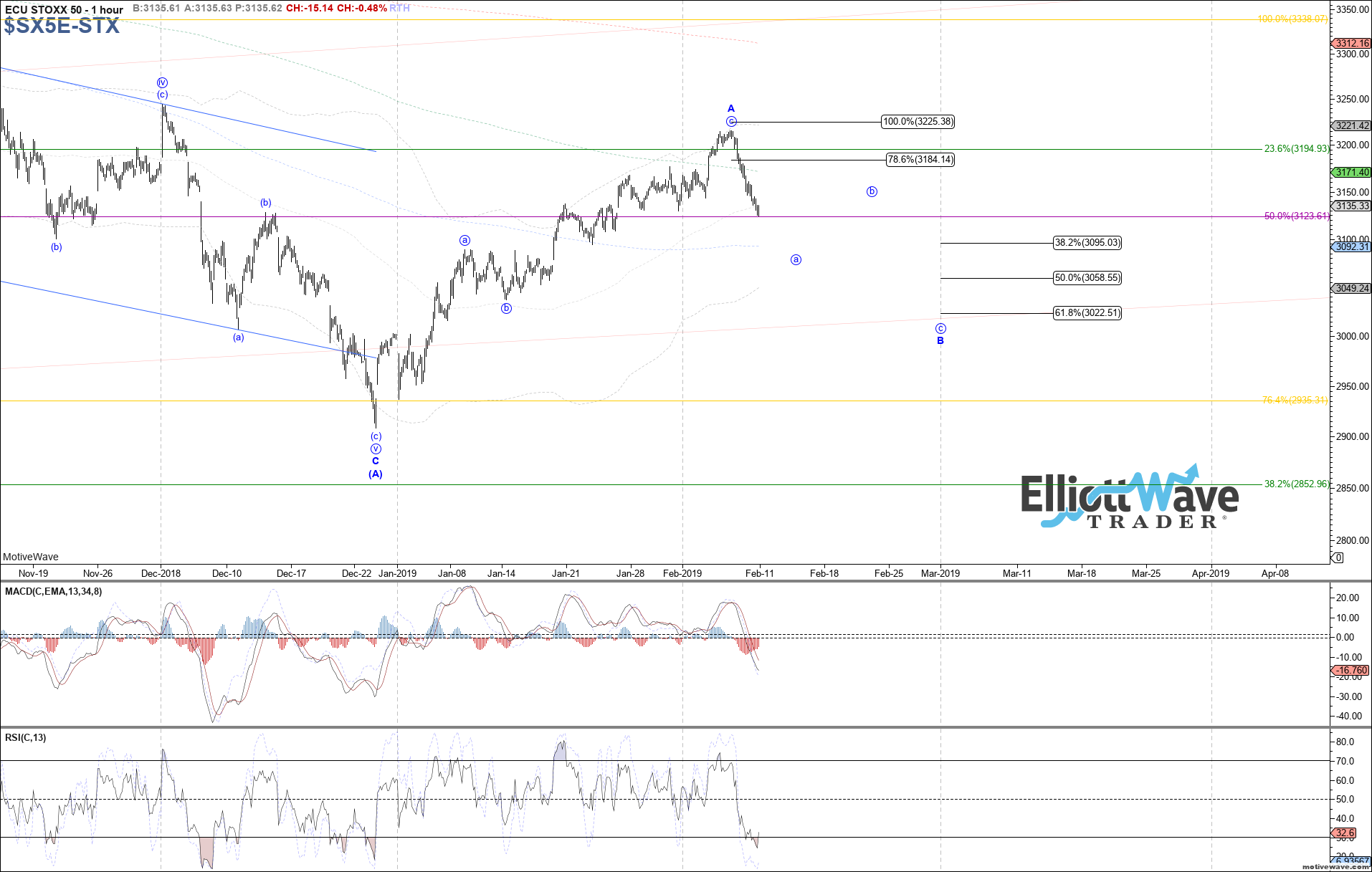 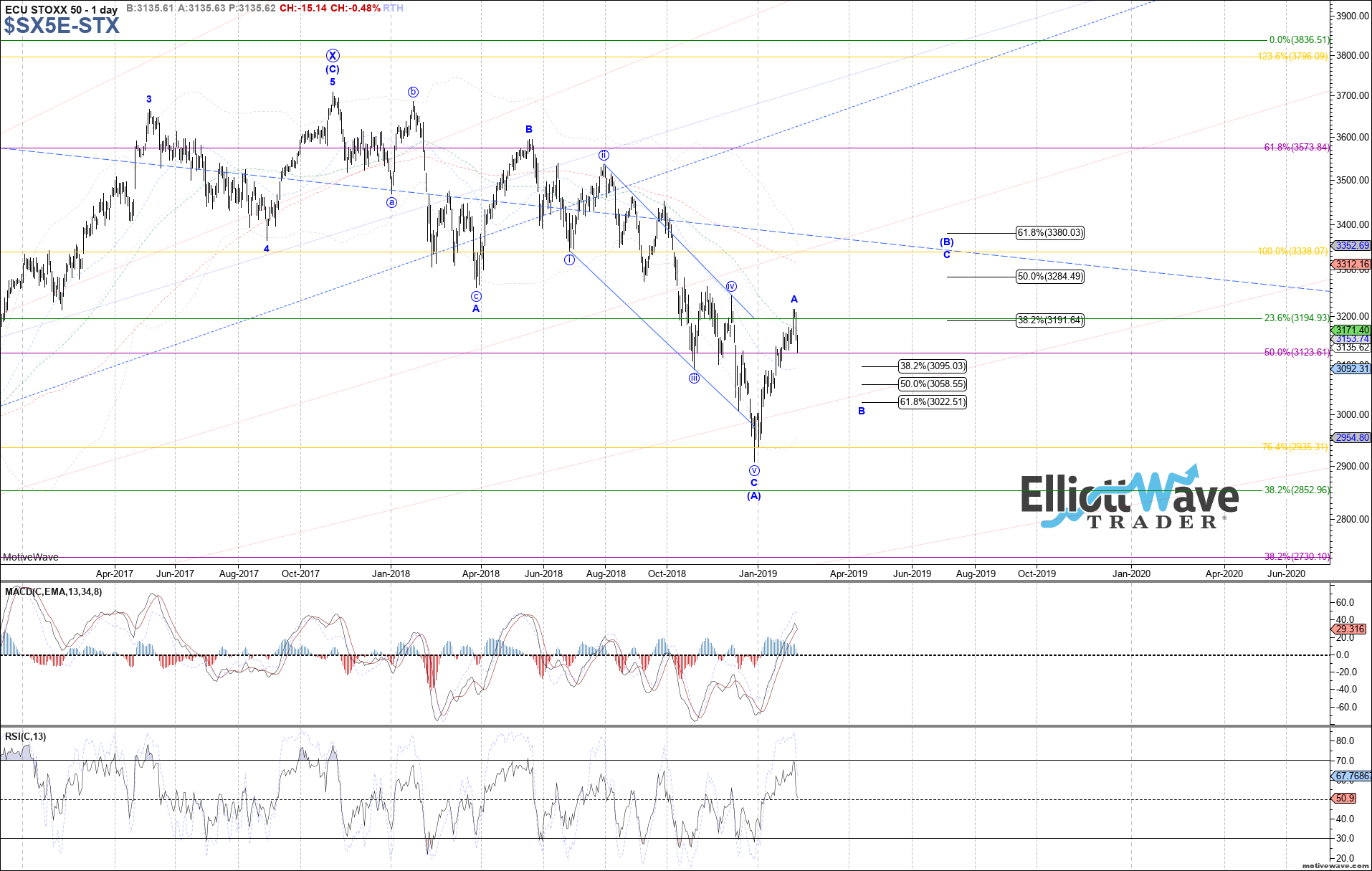 IBOV: The Bovespa pushing marginally higher at the beginning of last week, coming close to reaching the next target fib at 98900 as the 1.764 extension. Price has since rolled over strongly, breaking the initial 94805 signal support to start suggesting a top in place as wave v of 3 and the start to a corrective wave 4 pullback. Under that assumption, price should still be working on the initial wave a of 4, with 95510 – 96795 as near-term resistance for this current bounce off last week’s low as wave (b) of a. 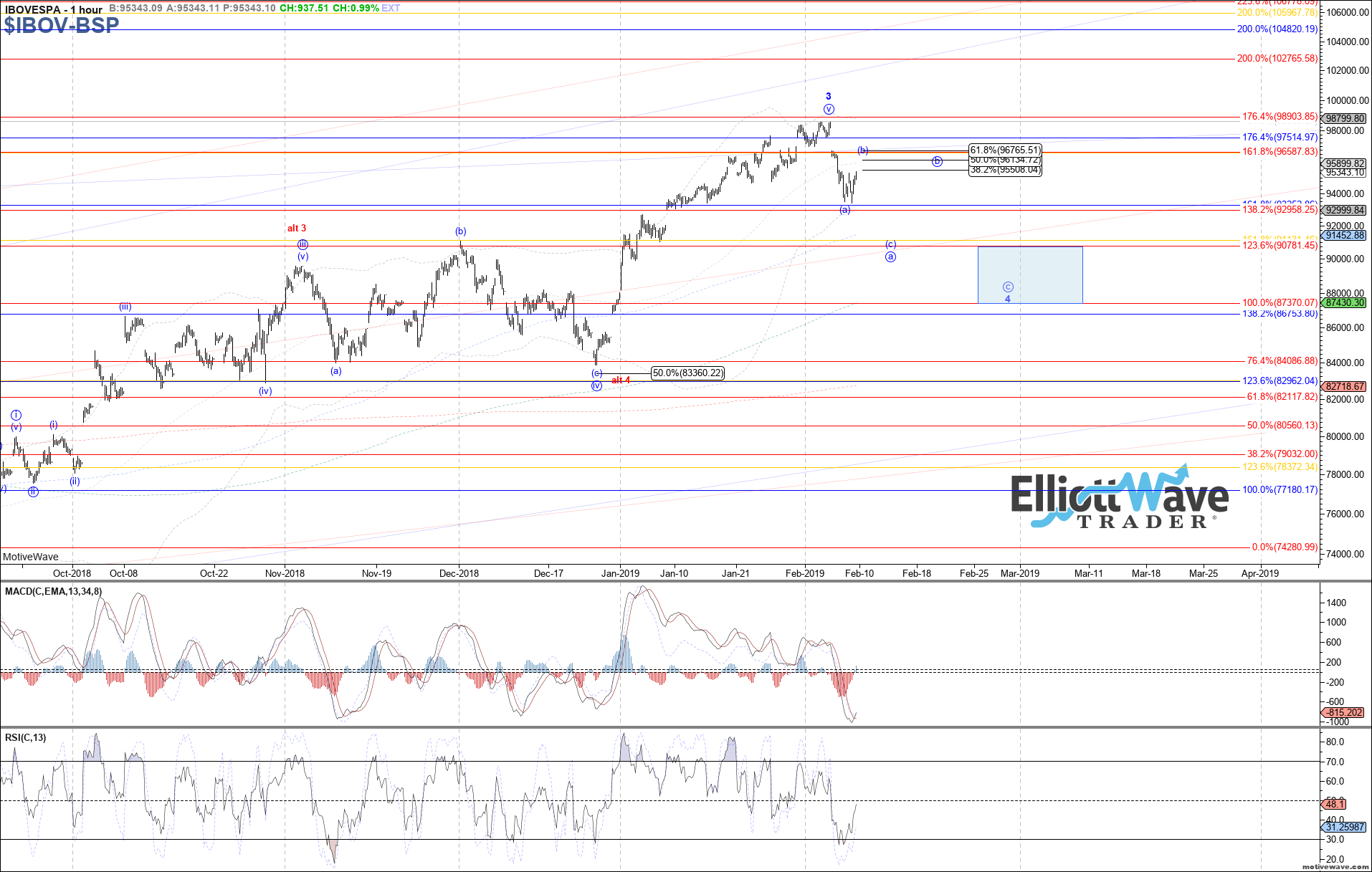 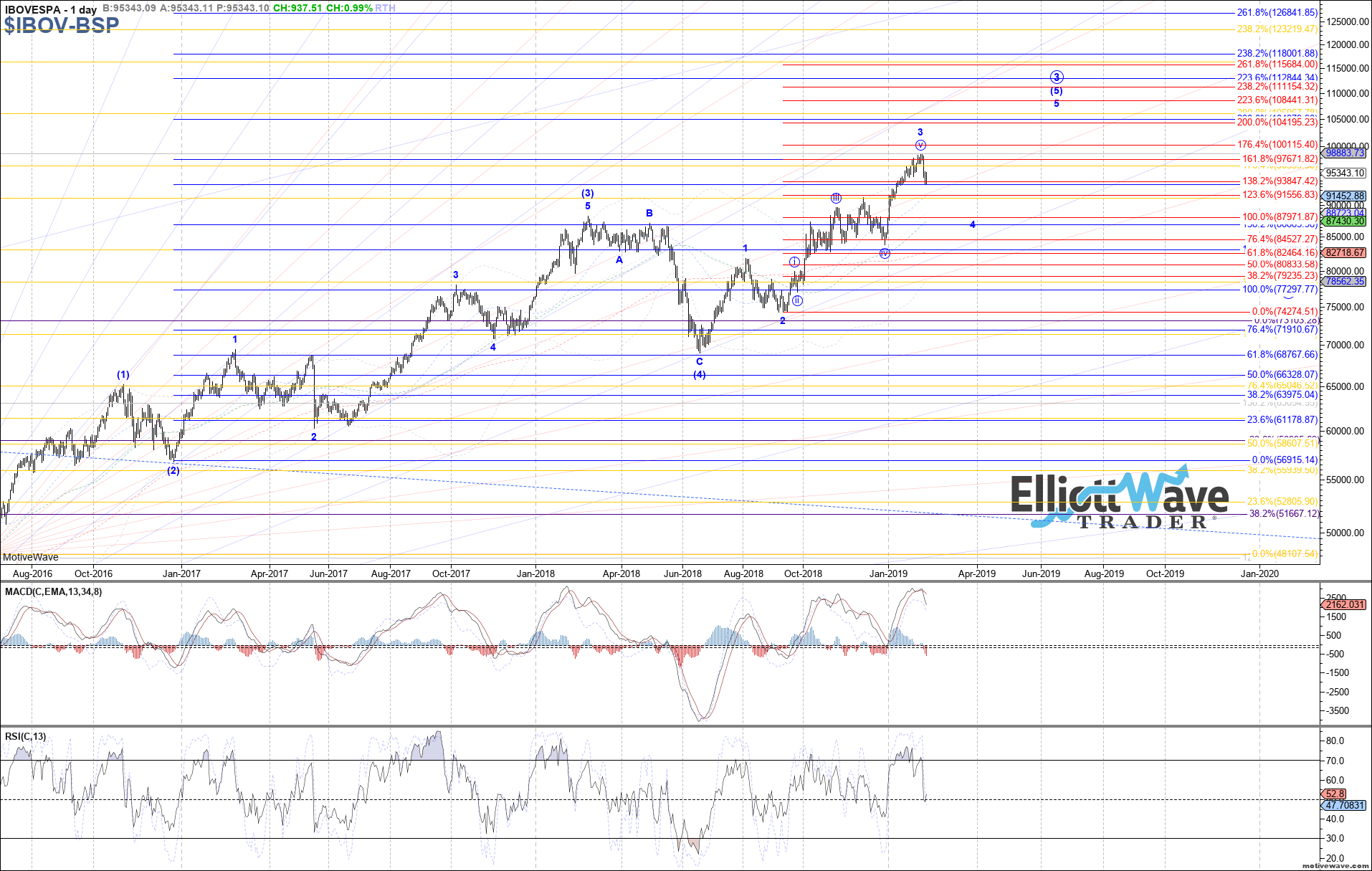 IPC: The IPC started off initially higher last week, but failed to exceed the prior January high and instead has rolled back over again to retest the recent 43100 low. Therefore, odds are now in favor of this bounce being corrective as wave B of (B), and price now heading lower again as wave C of (B). If that is the case, then wave C may take shape as an ending diagonal, with price currently close to finishing off wave i of C and setting up a corrective bounce as wave ii of C next. 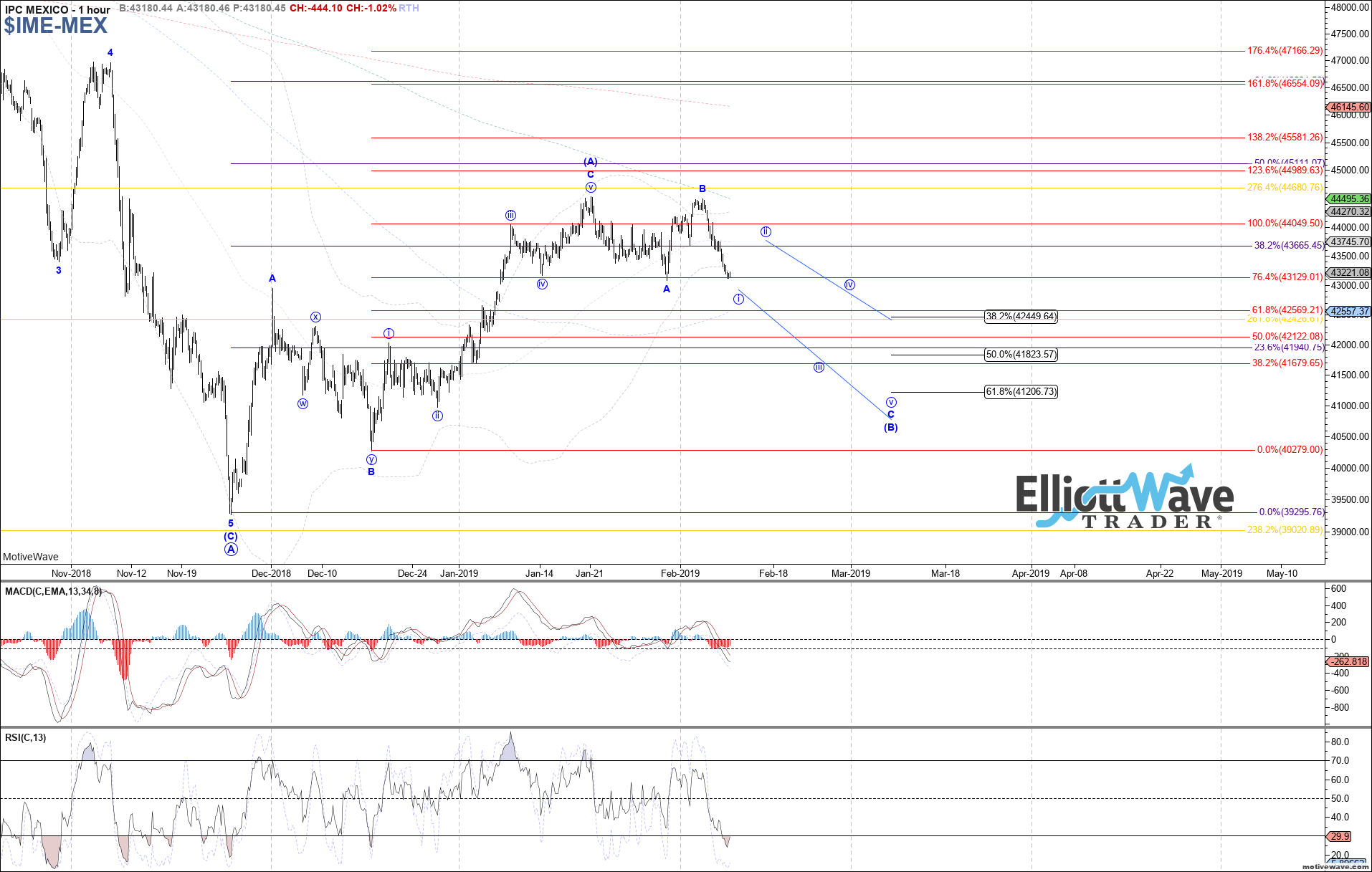 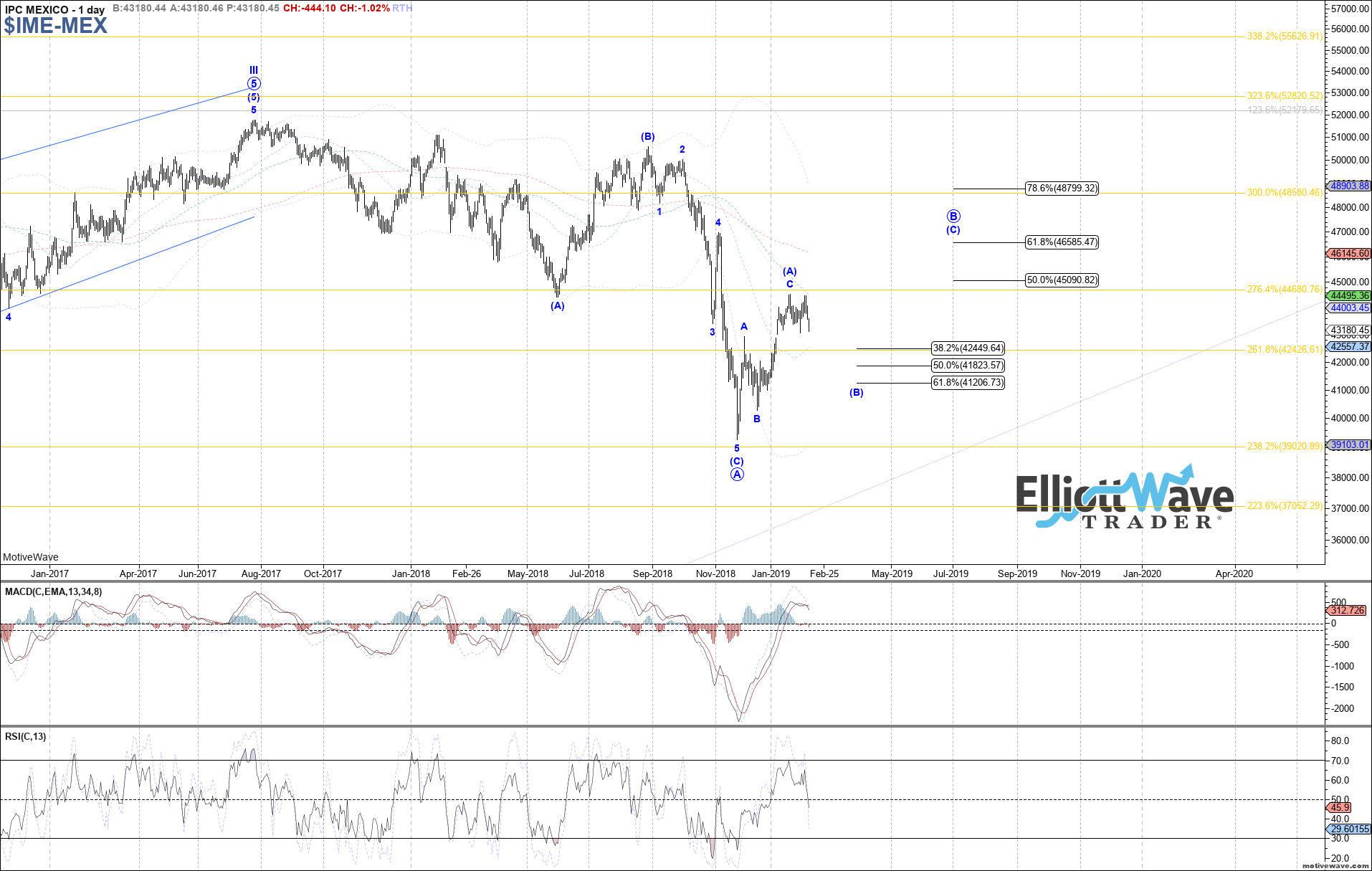