While I have fundamental concerns about some assets due to the delta variant and overall economic conditions, or in some cases for valuation reasons, it’s also increasingly clear that many high-quality assets are being offered by the market at a discount.

This issue of “Where Fundamentals Meet Technicals” focuses on some oversold investments that, while they might not be at their absolute bottom, are extremely out of favor and have good fundamentals.

CNN’s fear/greed index is showing a lot of fear:

This is historically a contrarian indicator. SentimenTrader has a similar model that shows that buying on periods of fear tends to work out well: 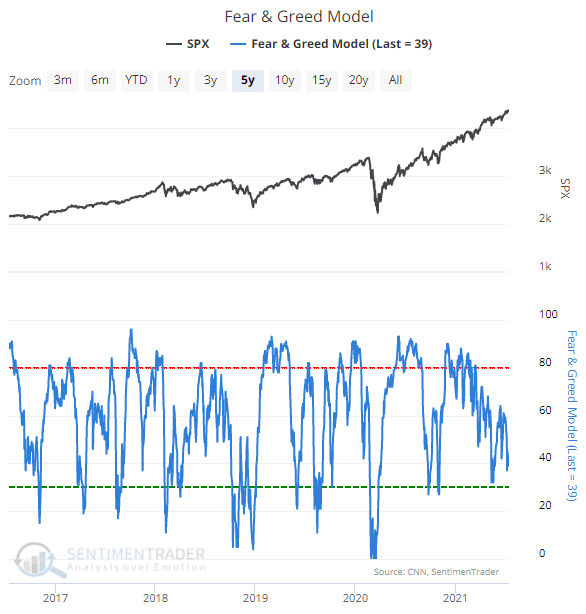 We’re not at the worst possible level of fear, but we’re closer to fear than greed. The S&P 500 isn’t down too much, but many subcomponents are deeply off their highs at the moment.

Equity investments offer massive long-term returns, but come with volatility risk. When I buy something, I’m willing to hold it for 5 years or more to let the thesis play out.

Sometimes I sell early if it gets overvalued, and very occasionally I sell an investment if the fundamentals deteriorate and my fundamental thesis changes, but most of the time when I buy something, I’m buying it as though I’m a private owner of that business, looking to build equity and/or receive cash flows from that business.

That doesn’t mean I want to rush out and buy meme stocks, hoping that I can sell them for a higher price to a fool in a few months. I’ll pass on that. A lot of this market turmoil is happening to clear out speculators in stocks or cryptos that don’t have good underlying fundamentals.

Instead, it means I want to buy things with good long-term fundamentals, that are on sale in recent days and weeks.

Zoom (ZM) is one of those weird stocks that is expensive in absolute terms, and yet nearly the cheapest it has ever been in its history as a public company. The stock trades for over 30x sales and over 60x cash flow, but has blazing growth potential and is near the low end of its rather brief historical valuation range. 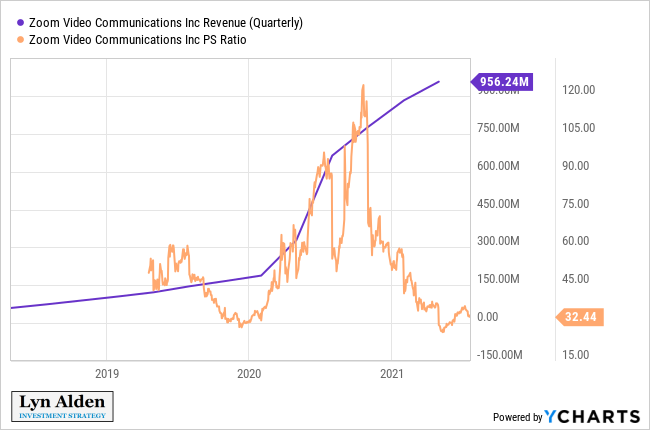 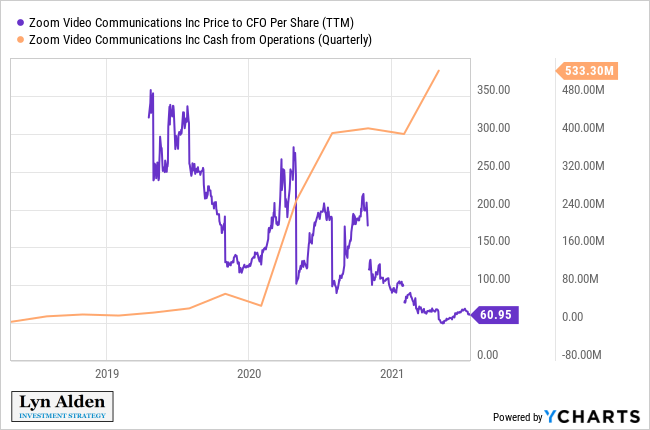 Garrett sees the stock as being near the bottom of its technical range:

Let me put it this way. If Zoom was a private company and someone offered me the opportunity to buy today and cash out in five years without seeing the price quoted to me between now and then, I’d take that offer as part of a diversified portfolio.

On the other side of the growth/value spectrum is the midstream sector. OPEC+ is raising their output, and the delta variant of the coronavirus threatens to have governments reinstated lockdowns, all of which can put some downward pressure on the price of oil.

However, the midstream sector mainly just stores and transports oil and gas and associated petrochemicals. They need their counterparties to be able to pay their bills, but other than that, they mainly just don’t want to see a huge drawdown in volume. Years ago, MLPs used to be highly-leveraged, but after a number of “blow ups” in the space, many of them have more attractive capital structures.

Energy Transfer isn’t my favorite pick (that would go to Enterprise Products Partners), but it’s a more aggressive pick. The midstream used to be about growth- issuing debt and equity to fund new infrastructure. Now, after multiple “blow ups” in the space, it’s about value and about self-funding. As a result, Energy Transfer is becoming acquainted with what it means to have actual free cash flow: 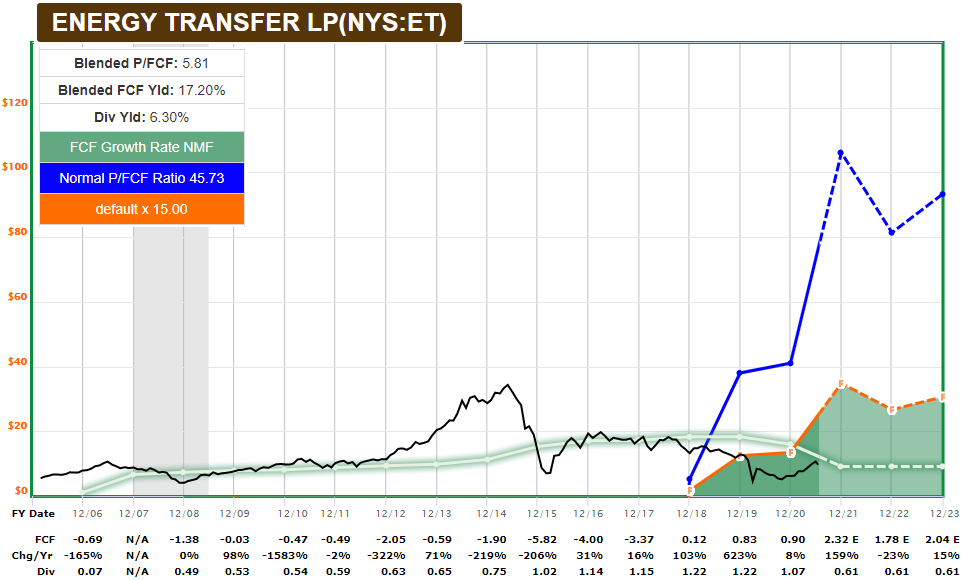 In terms of earnings, I think ET’s bottom is in, back in 2020. The distribution was cut, and the business structure makes more sense now. 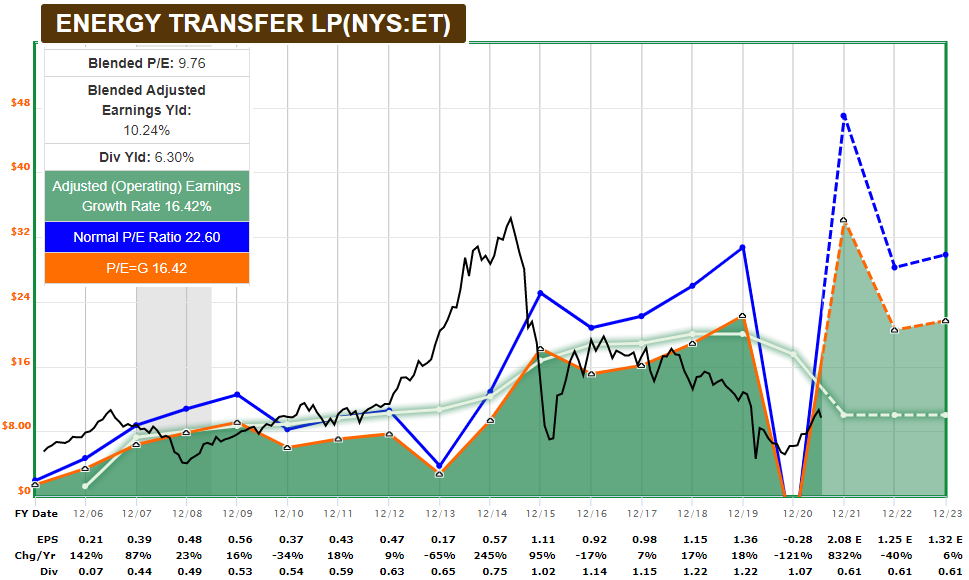 Although we don’t have a local bottom and bounce yet, Zac sees ET as being near capitulation:

Similarly, Garrett sees this as part of a correction in the broad midstream space (AMLP). Once the sector starts showing signs of a bottom in place, it has plenty of upside potential:

The midstream sector is filled with plenty of businesses that, if I were to buy as a private equity owner and receive forward cash flows for years without being quoted price on a daily basis, I’d be happy to do so at these levels.

After their major correction, I became pretty bullish on MARA and RIOT in recent weeks. Since then, they’ve continued to weaken, along with the broad equity market and the price of bitcoin.

In my view, this simply represents high quality assets going on sale. My fundamental thesis remains unchanged, in their favor.

Garrett’s charts show this price level as being a bottoming zone.

Now, we still need to see a bounce to improve the odds of it being a bottom, but from a fundamental perspective, I’d be happy to own long-term equity in bitcoin miners at these levels.

Bitcoin’s price is down, but the network also experienced yet another downward difficulty adjustment, which makes it easier for existing miners to mine coins: 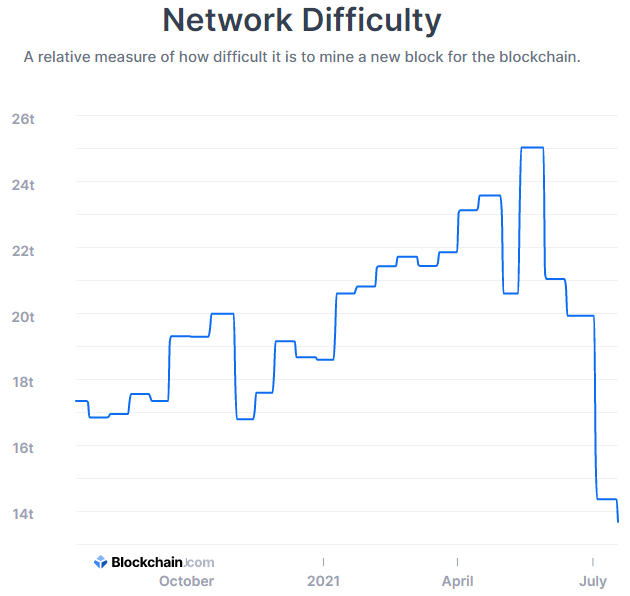 Overall, there is so much negative sentiment in cyclical assets. The S&P 500 is barely off by any points, while MARA for example is 55% off its April high, and 25% of its July high (earlier this very month). I like MARA at current levels from a long-term point of view.