This week’s issue of “Where Fundamentals Meets Technicals” dives into an assortment of growth areas.

Chinese stocks have whipsawed quite a bit recently.

The CCP has cracked down on some of the country’s big tech oligopolies, particularly Alibaba (BABA), to reign in their overall market influence.

The US Treasury listed a bunch of Chinese companies that will be illegal for Americans to invest in, including semiconductor and engineering/industrial firms. The largest was China Mobile, and the NYSE flip-flopped on whether to delist them.

Alibaba and Tencent (TCEHY) were briefly mentioned as possible additions to the list of stocks that Americans aren’t allowed to own, but were not included on the list, which knocked around their price a bit as that question was sorted out.

Delisting from exchanges is not a big deal for these large cap Chinese firms, since they’re not reliant on the capital. Tencent, for example, doesn’t even trade on the NYSE or NASDAQ. However, an outright blacklist that makes it illegal for Americans to own them, would be a huge deal for American investors and an ongoing tail risk to be aware of.

My base case is that these mega-stocks like Tencent and Alibaba will not be blacklisted within the next, say, 4+ years, because it would mess up every international/emerging index out there since they’re the largest two ex-US companies in terms of market cap in the world. The amount of lobbying by multi-trillion dollar asset managers and large banks to any administration against that would be quite big. However, it remains a nonzero possibility and investors should manage position sizes appropriately. 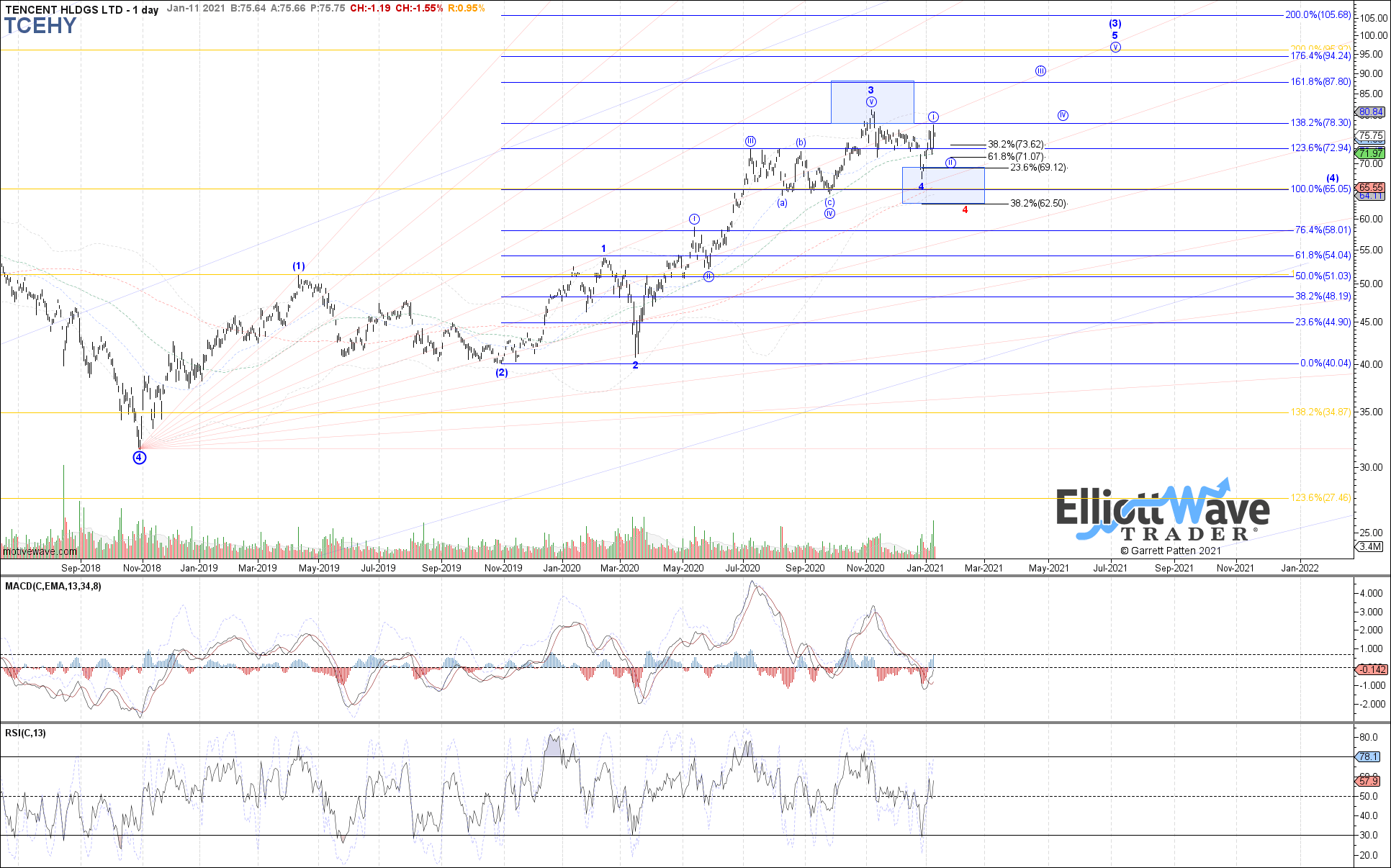 The fundamentals for it look quite good. The balance sheet is great, the growth is great, and the valuation is in line with its normal history, unlike US tech stocks that are off-the-charts in terms of valuation: 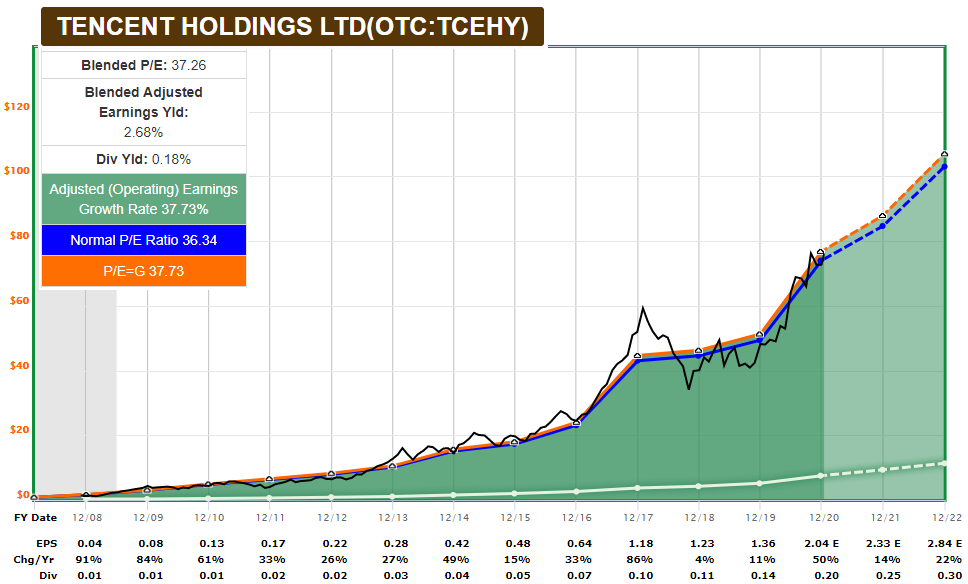 Fiserv (FISV) is considered “old fintech” in the sense that they run a big chunk of bank software behind the scenes. In 2019 they acquired First Data, which they’re still digesting a bit, and that further extended their reach.

They benefit from an economic moat known as “high switching costs”. It’s a massive ordeal for banks, which are heavily-regulated to begin with, to swap out their backend systems. A competitor would have to be way, way better, which favors incumbents. 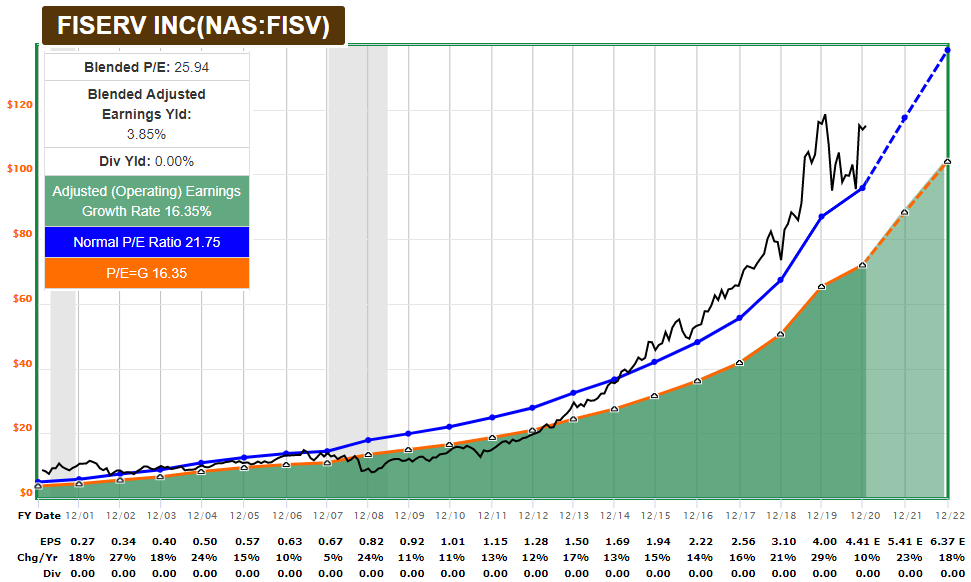 Garrett currently has a bullish setup in place for it: 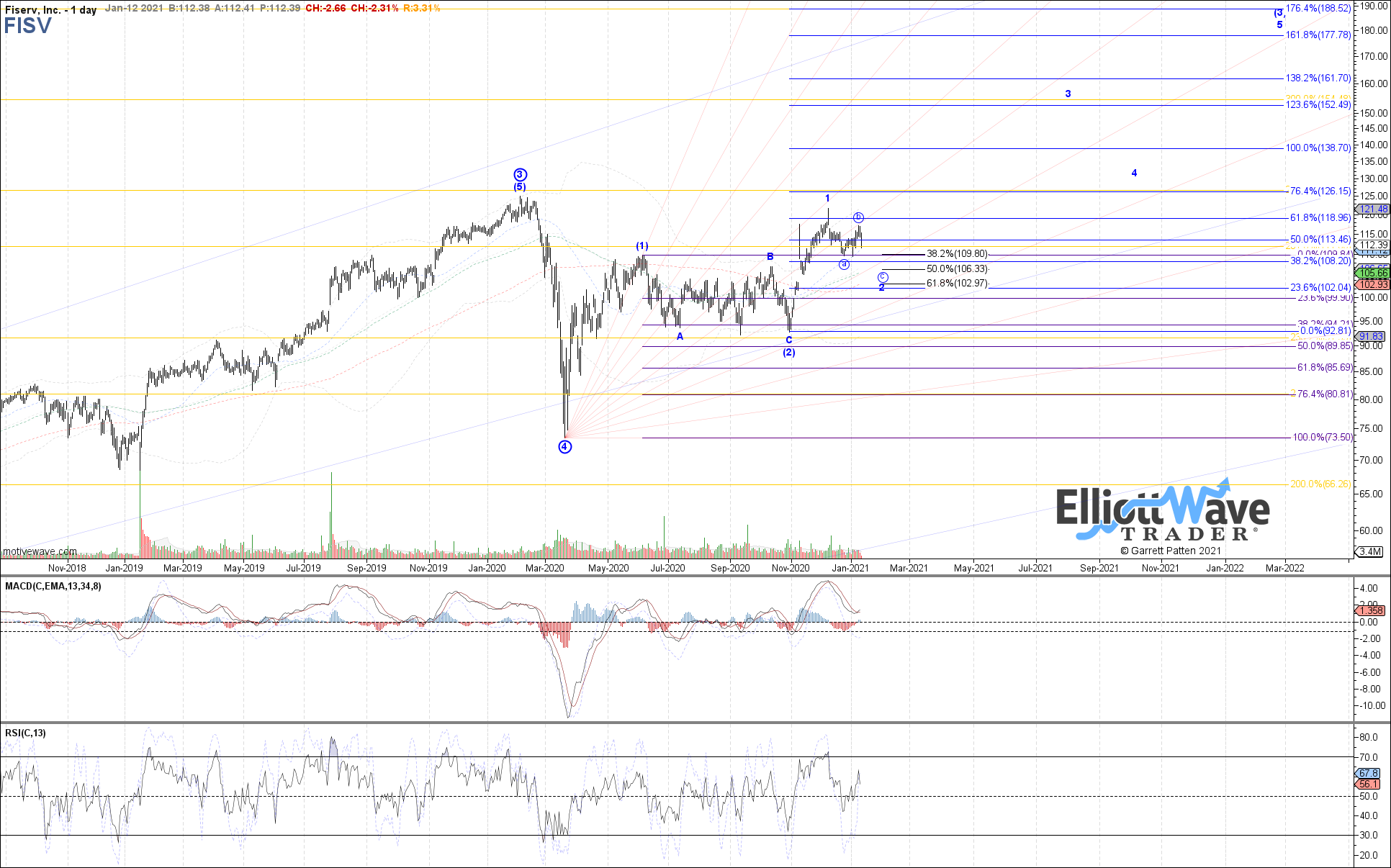 The good news is that they are paying it off, and as of mid-2020 were down to $19.6 billion. The premise for this merger is that Fiserv buys First Data, trims duplicate staff to boost free cash flow, refinances their debt since the combined company is in better financial shape than First Data and can get lower rates, and starts using the free cash flow to pay down debt and strengthen the balance sheet again, as a larger, more diversified company with a wide economic moat.

So far, I’d say they’re on track. Their cash flows are consistent, which makes it easier to support debt than as a cyclical business, and their credit rating is BBB. If inflation comes along sometime in the 2020s, it could effectively take out a chunk of their debt in terms of purchasing power as well.

I continue to like Bitcoin, and as a decent proxy, the Grayscale Bitcoin Trust (GBTC).

Bitcoin had a correction over the past week, which is good to see since it wipes out excessive euphoria. The 2017 bull run had a number of 30%+ corrections, and many near-term indicators were overbought at this point. This correction cleans out some speculator leverage to allow a better base to build from.

I don’t know if we’ll see a lower low from this point, or just a consolidation for a while, but I remain bullish with an 8+ month view. Due to volatility, investors should manage position sizes carefully.

Most of the indicators I look at suggest that Bitcoin is still mid-bull-run in terms of its 4-year supply cycle. The MVRV z-score, for example, got a bit stretched to over 6.5 but has fallen back down to about 5, which is good to see: 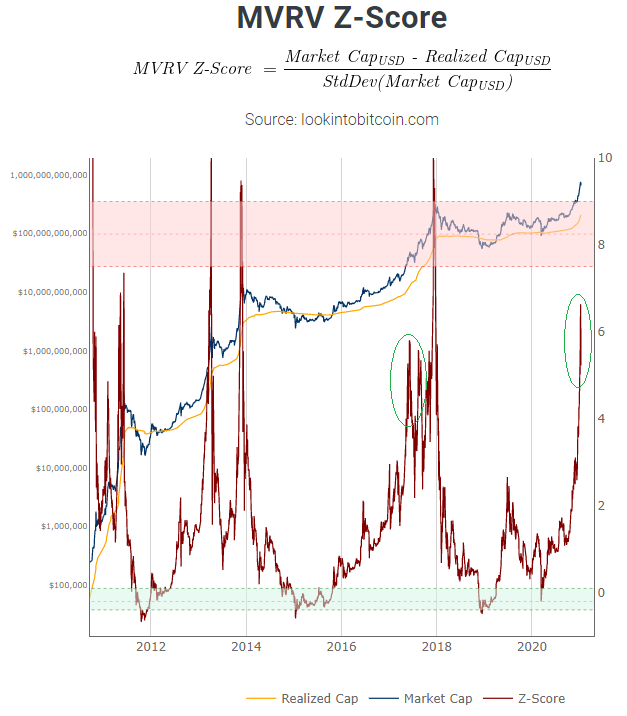 Garrett sees a potential move to $70 or so for GBTC in mid-2021, which is about a 75% increase from here. Fundamentally, that would actually be approximately my base case at this point. I wouldn’t be surprised if it undershoots that target or overshoots it, but I consider that a reasonable target for this stage of Bitcoin’s bull run. 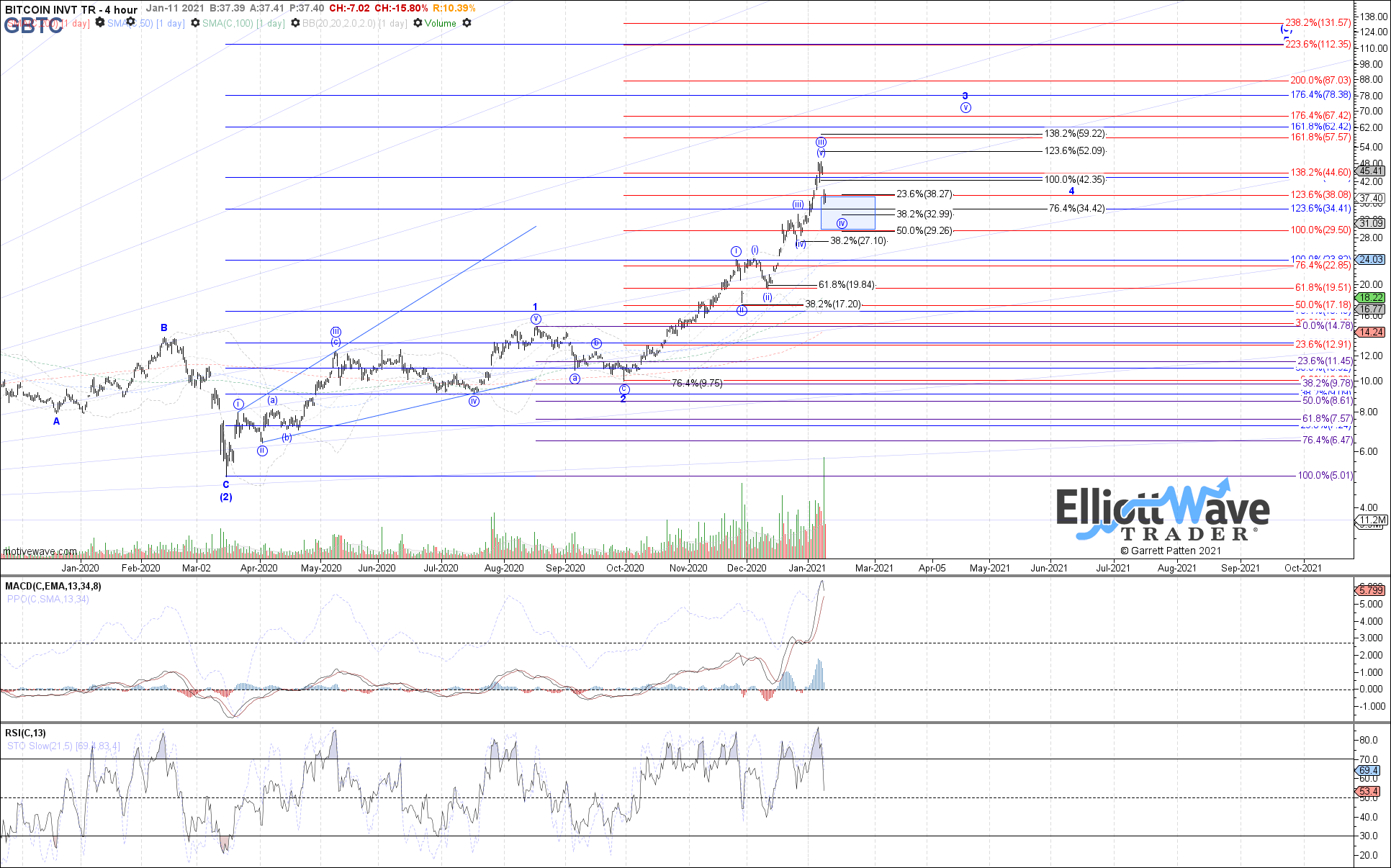 GBTC’s premium over NAV is back down to reasonable levels as well, which is nice to see: 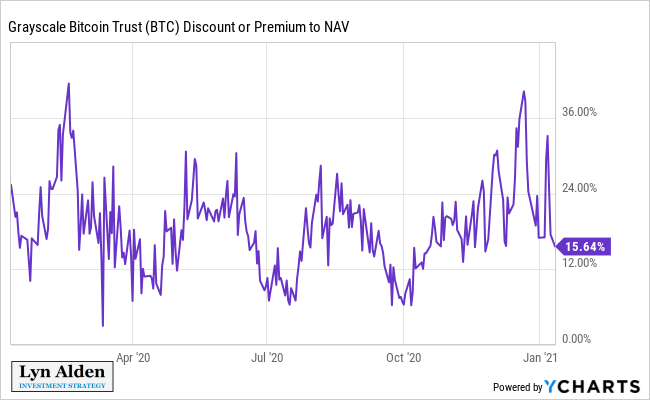 It’s more cost-effective to buy Bitcoin directly, but for those who don’t want to, or who want to hold it in an IRA, GBTC at this level of premium is a reasonable second choice.

Lastly, GBTC recently announced that they are re-opening private placements. Retail investors buy GBTC on the market for a premium, but accredited investors can invest directly with GBTC at NAV, and hold it with a 6-month lockup period. This is how GBTC keeps getting funds to go out and buy more Bitcoin.

Institutional and accredited investor demand remains strong at this point. If that remains true, GBTC could continue to be a massive buyer and holder of Bitcoin in 2021 as they were through 2020. Bitcoin liquidity is pretty low on exchanges (only 2.3 million coins there vs 3 million a year ago), so this level of buying should continue to be supportive of price. The latest big-name investor to warm up to Bitcoin is legendary value investor Howard Marks, as per his recent memo.

However, due to its volatility, investors should manage their position size in a way that is appropriate for their unique financial situation, goals, and conviction or lack thereof on the asset class.