A couple of weeks ago I highlighted how stretched multiple indicators were to the downside, like tight rubber bands, suggesting a likely counter-rally

We've got that, and now going forward, things are a lot less clear and careful industry selection is important.

This issue of Where Fundamentals Meet Technicals looks at a pipeline company and a bitcoin company.

Energy Transfer (ET) had a number of missteps in the past but it's in a very strong period of recovery now. It remains my secondary and more aggressive pick for pipeline MLPs. 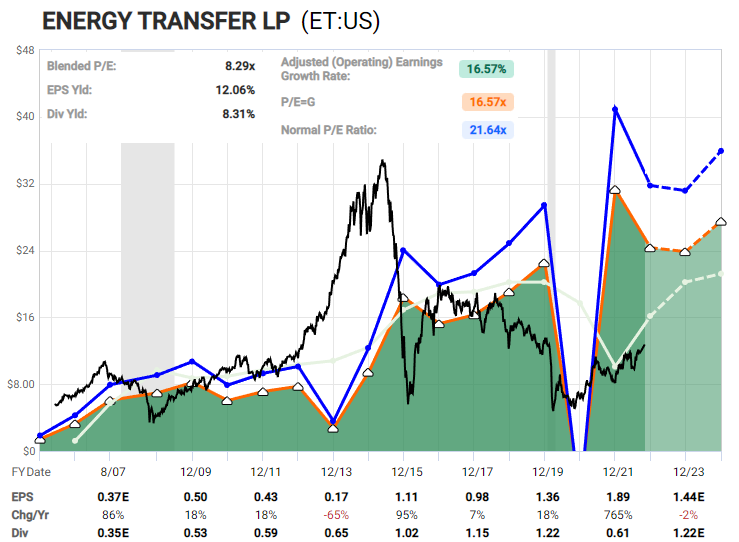 As far as technicals are concerned, Garrett recently wrote, "Midstreams have been the one area of the energy sector that have maintained a cleaner path for more immediate upside, with price still following through so far as wave c of (iii)" He has a reasonably bullish chart in place when you consider the compounding effect of the distribution on top of it:

ET recently raised its distribution by 15%, and currently yields over 8% with a reasonable payout ratio for an MLP.

The EV/EBITDA ratio remains rather inexpensive compared to its history: 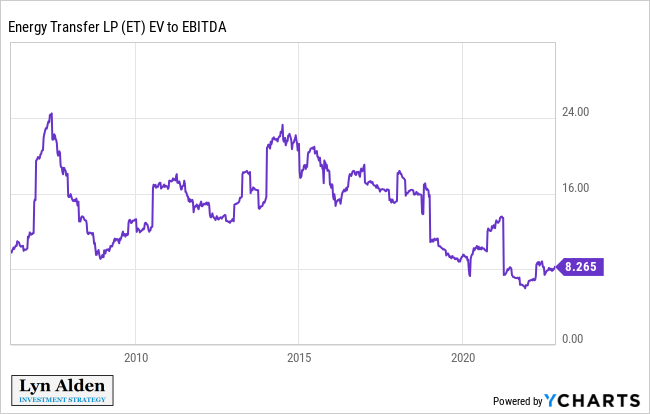 Zac recently posted a set of S&P 500 charts that suggested poor returns for the remainder of the decade. Here was an example:

While I don't have a specific view on index price levels, I do think most variables point towards a weak decade for S&P 500 returns, especially in inflation-adjusted terms. Stanley Druckenmiller has expressed similar concerns.

High-yielding value companies can outperform in this environment because at least they are paying a good dividend yield while they chop along. I expect ET to gradually climb higher in unit price, but the bulk of the returns will likely come from all of the big fat distribution checks it sends out each quarter. These kinds of yield opportunities in my view are likely to do better than the S&P 500 this decade.

MicroStrategy (MSTR) is a software company that at this point is more well known for holding 130,000 bitcoins, with some bonds attached to juice up the risk profile.

Garrett has a constructive chart in place:

Unlike a trust or an ETF, MicroStrategy offers positive carry- it's a profitable company rather than a fund that charges an expense ratio.

However, its *leveraged* aspect makes it riskier than holding unlevered bitcoin.

The good news about the company's bonds is that they don't start coming due until the end of 2025 for the shortest ones, and then there are various maturity dates that go into 2028. If bitcoin performs well over the next 3-5 years, then the company should have no problem refinancing its debt, since its assets will greatly exceed is liabilities. However, if bitcoin is stagnant or loses value during that relatively long timeline, then MicroStrategy may run into refinancing risk, forcing it to liquidate bitcoins or dilute the equity to service the debt.

Most on-chain indicators point to bitcoin being in a rather deep capitulation at the current time. The price is slightly below the average on-chain cost basis, which has historically been a good buying opportunity when looking out 3 years. 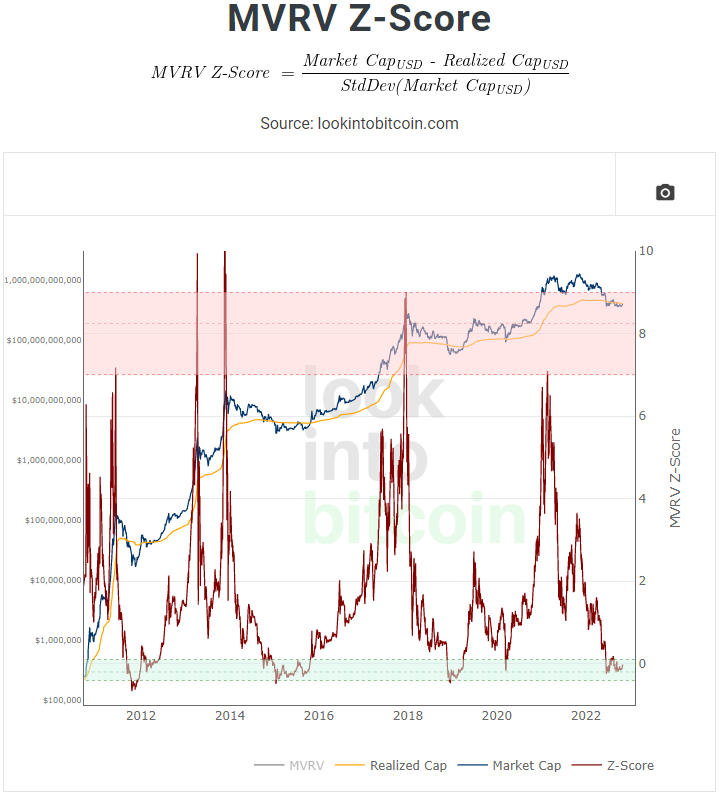