In this issue of “Where Fundamentals Meet Technicals”, we look at a couple high-yielding cheap value plays, and provide an update on the Grayscale Bitcoin Trust (GBTC).

Garrett recently posted a bunch of setups about rotation plays, the two that I like a lot fundamentally are both tobacco-related (even if I hate their products). 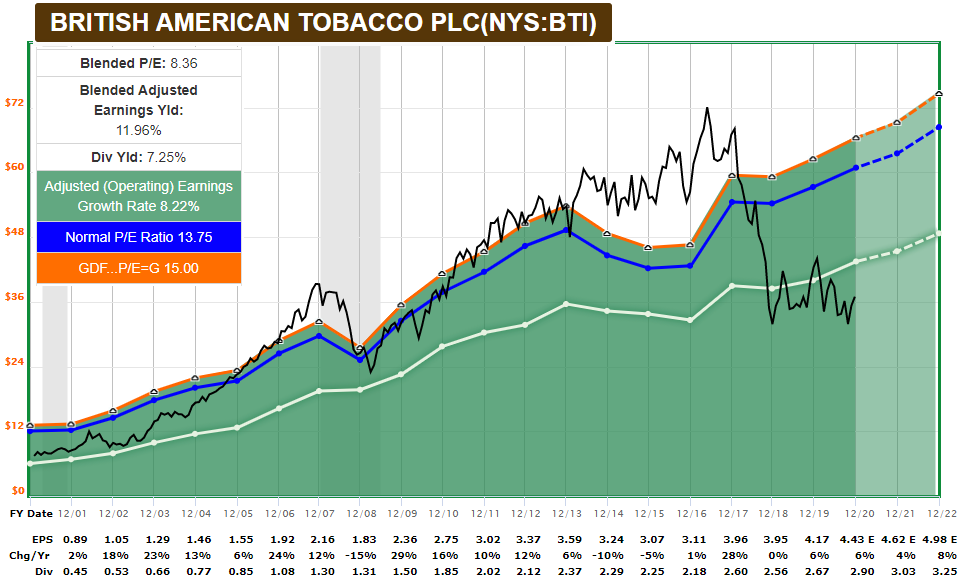 If we look at raw free cash flow, it also looks great: 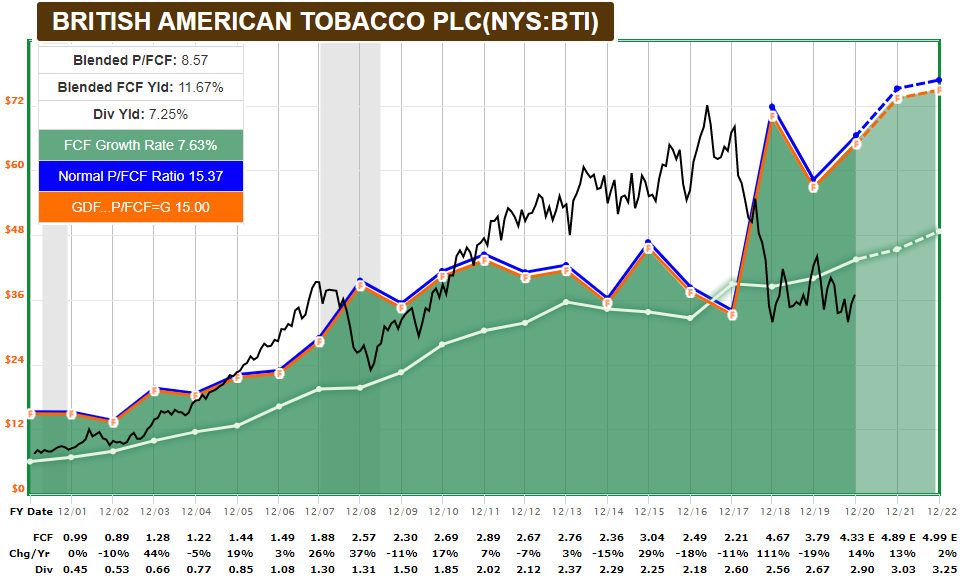 Ever since their big Reynolds acquisition, some of BTI’s metrics have been a bit wonky, because it takes time to digest such a large acquisition. For example, debt/EBITDA increased, while debt/assets decreased from the acquisition point: 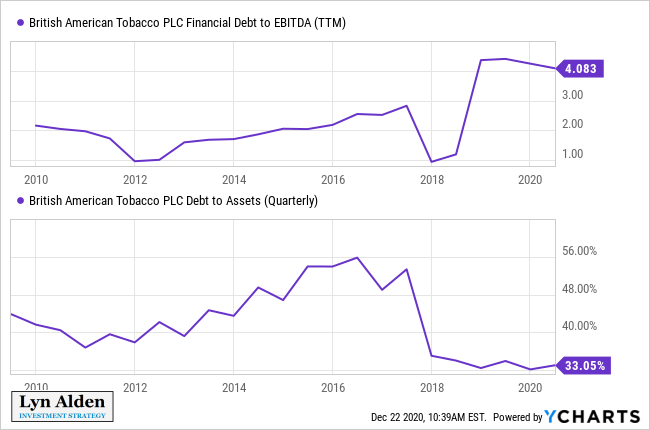 Over time, BTI will keep consolidating its operations and balance sheet, and is generating plenty of cash for dividends. It’s not a sexy stock pick, but it has outperformed for decades, and after the past five years of severe underperformance, is extremely cheap relative to its fundamentals.

Garrett has a positive setup for it: 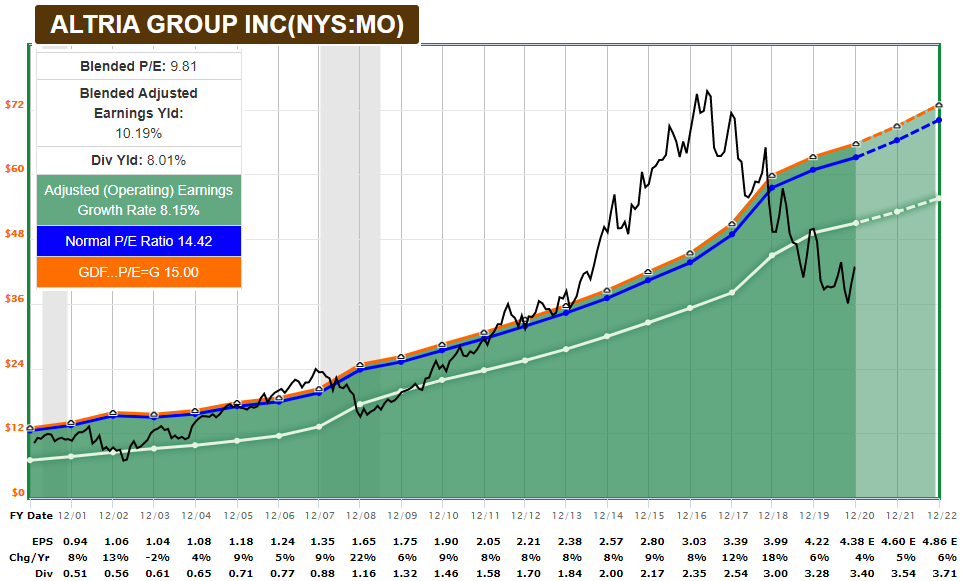 And Garrett has a similar setup for it:

I prefer BTI due to its global exposure, but holding a small collection of cheap tobacco stocks is rational as well. Many high-yield stocks are banks or energy or real estate related, so a couple small tobacco stock positions can add a bit of diversification to a yield-centered portfolio.

More broadly, there is potential growth-to-value rotation occurring. It could be another fake-out, but given the big shift in fiscal and monetary policy this year, along with the unusually wide valuation gap between growth and value stocks, this one could have real potential: 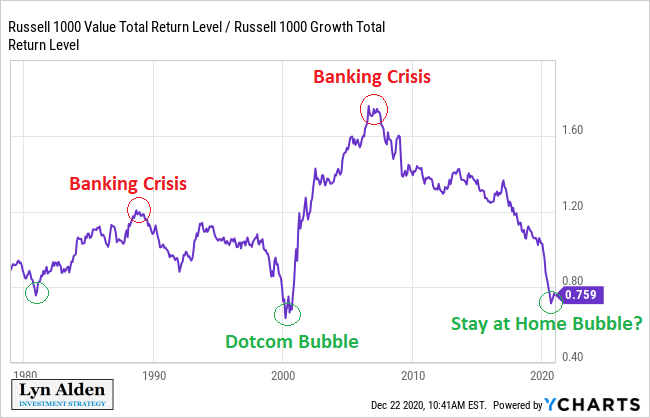 Zac has a long-term bullish setup still in place for GBTC, but with a risk of a significant pullback in the near-term:

I mentioned in my December 20th deep dive report that I am considering trimming GBTC from the No Limits portfolio. It has tripled from our entry point, and now has a 40% premium to NAV: 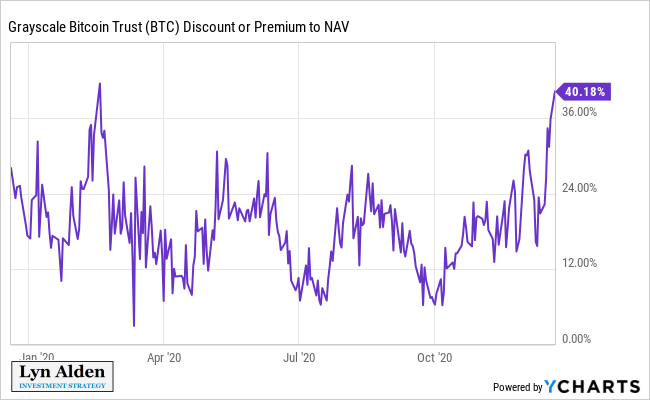 So, today I did go ahead and trim 100 shares, or 20% of the position. I remain bullish on Bitcoin over the next year, and pretty bullish on GBTC as well, but because it became a large portfolio position and has a premium that is higher than my liking with plenty of corrective potential, I’m trimming here for risk management.

Likewise, Zac has a bearish near-term setup for TSLA:

I discussed a probable TSLA short in my December 20th report for fundamental reasons, and am now short TSLA from $660. The valuation is excessive, and a lot of this recent rally was about its entry into the S&P 500, which required a lot of forced-buying by index funds, which is now complete. I consider it a “sell the news” event at this point, as a base case. However, it’s important to maintain tight cover points because TSLA does have a tendency to surprise to the upside with positive sentiment.

I've had mixed success with TSLA shorts this year as a portfolio hedge and risk management tool, and maintaining tight cover points is what kept the attempts rather neutral in terms of profit and loss. I don't use stops for long positions but I use them strictly for short positions. Don't fight sentiment on the upside.

Zac’s technical analysis has a long-term bullish setup for TSLA after this correction, whereas I think the fundamentals are quite risky, so we’ll see what happens. In the near-term, however, there is plenty of alignment about corrective potential.