Chinese stocks have been among the worst-performing assets over the past year, for a variety of reasons. The bear market in their stock market has been longer and deeper than I expected.

It began when Chinese authorities began cracking down on Alibaba (BABA) in late 2020. Jack Ma publicly criticized the Chinese banking sector and was preparing to IPO Ant Group, and that marked a massive turning point. Ma disappeared from public view for months, the Ant IPO was shelved, and regulators began cracking down on Alibaba and other major platform companies. This came amid overvaluation and exuberant sentiment for Chinese assets in general.

Under a “common prosperity” message, Chinese regulators went after anti-competitive practices of Alibaba and Tencent, and forced them to invest billions of dollars into a common prosperity fund. They cracked down on ride-sharing company DiDi for its data handling practices. They went after Tencent to limit the amount of gaming time that Chinese youths could have each day. They crushed the for-profit education sector. The stock market got hit after hit after hit.

Meanwhile, China’s economy went through a declining credit cycle and popping of a real estate bubble. When we throw into the mix the situation in Russia amid the war (including shutting the stock market and potentially giving a “zero” to western investors due to sanctions in otherwise sound companies), western investors seemingly had zero appetite to own any public securities in China by this point (despite having exposure to trillions of dollars of Chinese manufacturing/logistics infrastructure).

Chinese stocks had a massive capitulation to extremely low levels. Then, top Chinese regulators made public statements to clarify their intentions and ease market concerns.

Specifically, Vice Premier Liu He held a financial stability meeting that Chinese state media reported on. Topics included stimulating the economy, supporting the property sector, recognizing rule of law and property rights, and boosting the stock market. Their stated goal is to wrap up their regulatory crackdown, ensure consistency between bureaus, and get back to a growth cycle.

Chinese stocks roared higher, with the biggest two-day advance in decades. Since then, they have been bouncing around, still at low levels overall.

Does that mean everything is good now? China will respect property rights, and we all have a green light to invest? Of course not.

But it does suggest that the disorderly collapse in asset prices has reached a tipping point for the top officials in the country, and that they do want to issue more clarification and consistency for their plans. I don’t think they want turbulent markets, if possible, going into their National Congress later this year (the closest thing that China has to elections).

There’s a good case to be made that this capitulation was “the bottom”, and that Chinese equities can correct down, bounce up, and grind higher going forward now.

Alibaba for example is completely devastated in terms of valuation and sentiment:

Similarly, JD had a nasty spike down followed by a straight line up, which is now chopping around: 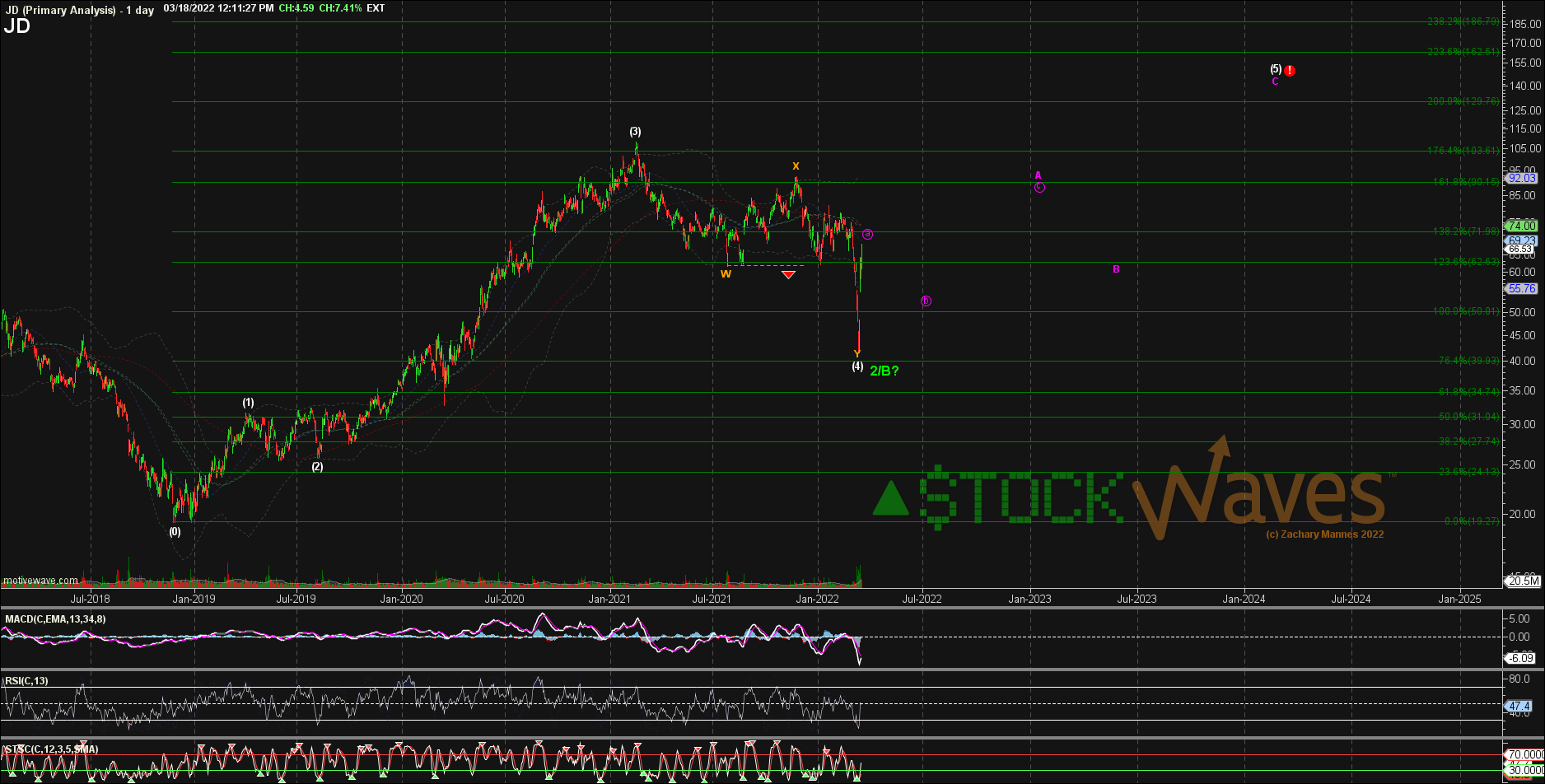 JD has spent many years investing in its logistic infrastructure which is starting to pay off with profitability:

Perhaps the safest way to play this is by owning a broad emerging markets index. The technicals and fundamentals look pretty good for that going forward: 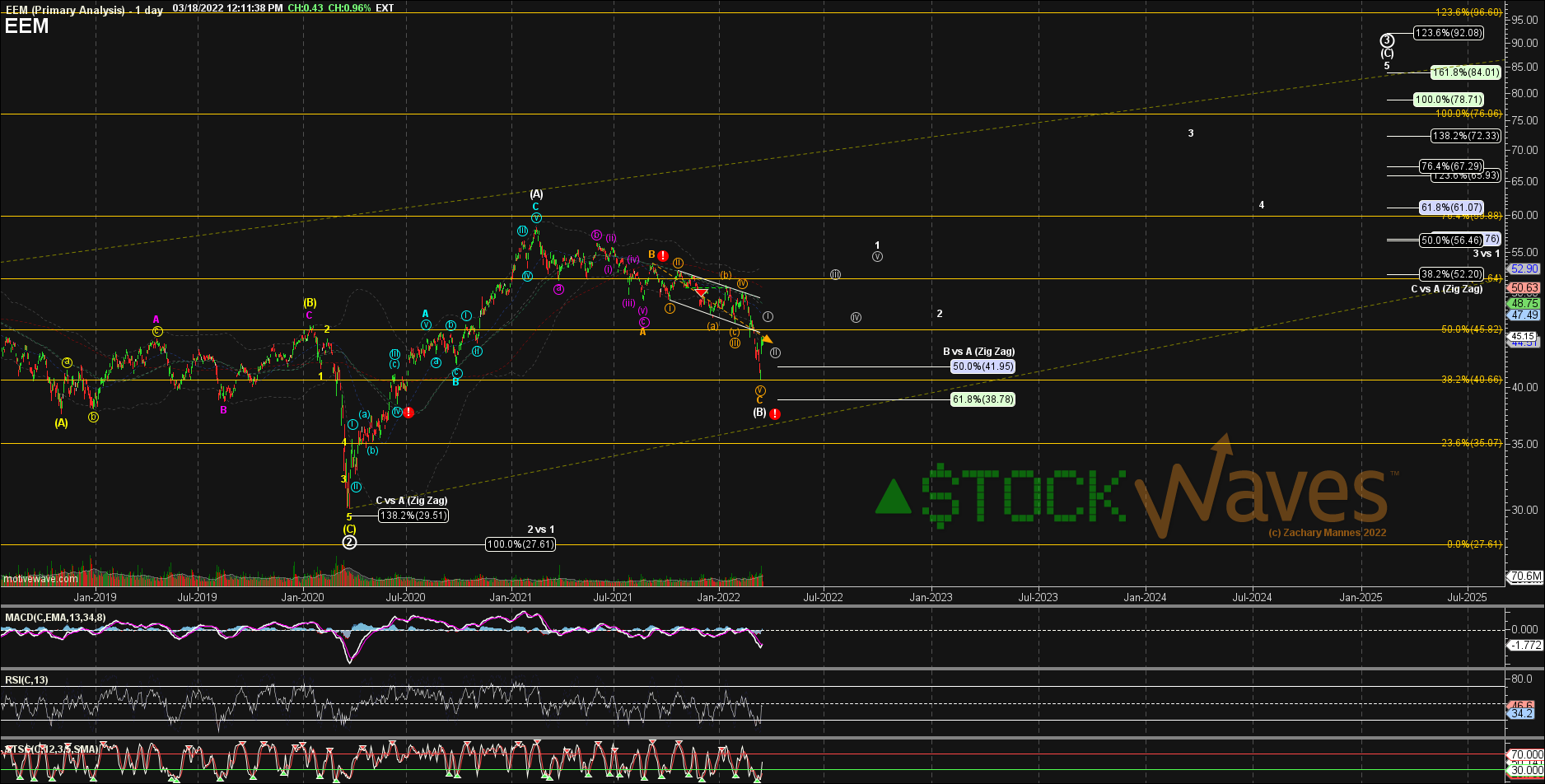 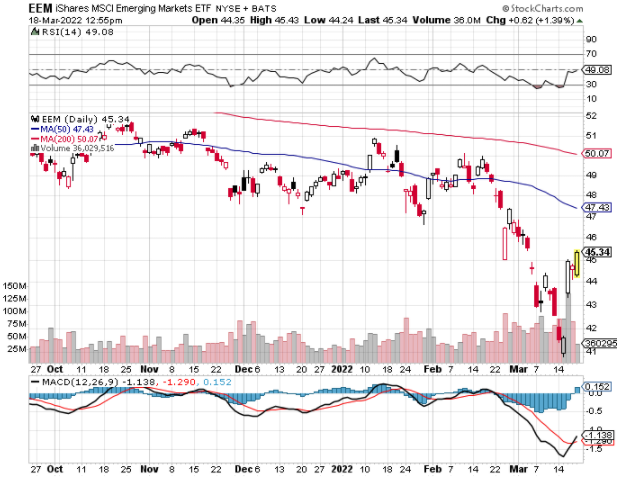 The final piece of fundamental news is that China seems to be easing out of COVID-19 lockdowns.

The country had reinstated strict lockdowns recently, for their biggest spike in cases since the pandemic began. Data from Hong Kong (the only Chinese data I would bother looking at for cases) suggests that the delayed Omicron peak is behind them. Meanwhile, China’s tech hub Shenzhen is emerging from strict lockdowns as President Xi emphasizes limiting economic damage and having a more balanced approach between their zero COVID-19 policy and their economy. This seems to be another area that reached a tipping point for top leadership and needed to shift course.