Zac posted some charts on some popular mega-caps today, and two of them really stood out to me.

One of them, Apple (AAPL), is suitable for highlighting in this week’s issue of “Where Fundamentals Meet Technicals”, because the technicals suggest that a significant local top may be around this level, which fundamentals also suggest is an overvalued level.

The other one, Amazon (AMZN), doesn’t quite meet the threshold for aligning between technicals and fundamentals, but it makes for an interesting comparison to highlight some possibilities.

Apple recently surpassed Microsoft to be the top stock in the S&P 500 in terms of market capitalization.

That doesn’t mean the company is bad. It could mean that the valuation will shrink while fundamentals do fine, for example.

The stock has great fundamentals outside of its valuation. Their returns on invested capital are consistently well over 20% (which is extraordinarily high), they have a great balance sheet with nearly as much cash as debt, they generate consist free cash flow, and they have been successful at growing their services revenue to capitalize upon and solidify their hardware ecosystem.

To fill that gap, they’ve focused heavily on share buybacks, which means their earnings per share have grown faster than their company-wide earnings.  Taking this into account, they grow their bottom line at a moderate rate on a per-share basis, which isn’t bad.

However, the strong performance of the services segment, along with the view that the company is basically invincible, have collectively led to investors sharply bidding up the stock’s valuation in recent years. The stock price has grown a lot more quickly than the company’s fundamental metrics, in other words.

Here is Apple’s EV/EBITDA and cyclically-adjusted price/earnings ratio compared to their average: 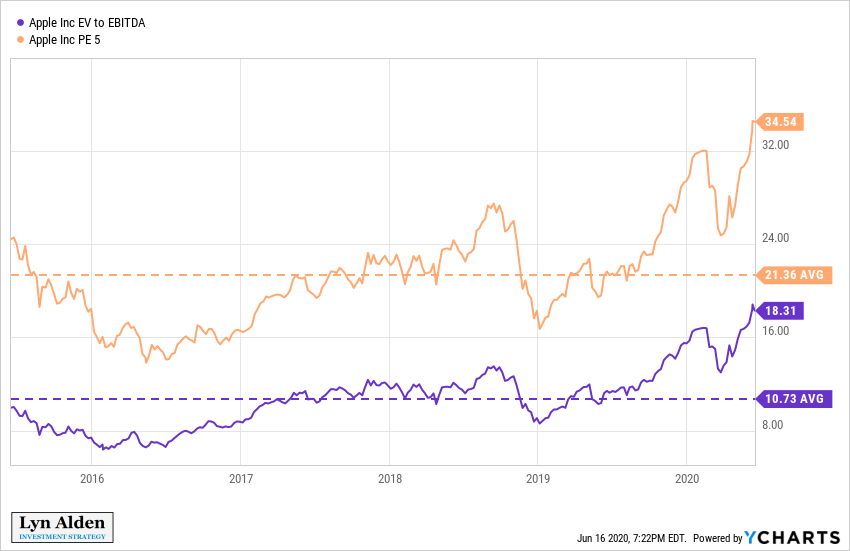 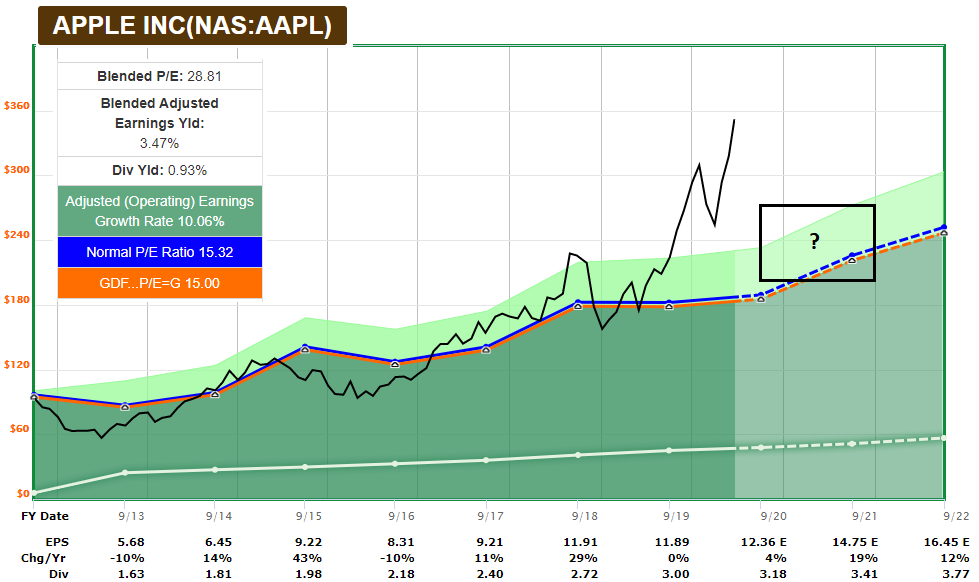 I put a rectangle on that chart around the target range that Zac is looking for with a technical retracement, which could vary depending whether his purple or white scenario play out on his chart. It’s interesting that although Zac focuses purely on the technicals/sentiment of the stock, his target happens to bring the stock back down roughly to its historically average valuation over the past five years, which is the point I wanted to highlight with that rectangle. That would be a fascinating alignment of technicals and fundamentals if it comes to pass.

A blended P/E ratio in the high 20’s, with a relatively modest growth rate (and thus a high PEG ratio), isn’t all that interesting from a value investor perspective.

In some ways, Apple reminds me of the Nifty Fifty stocks that were popular in the 1960’s. The Nifty Fifty stocks were a few dozen stocks that were seen as invincible at the time, that you could buy at any price. They went on to provide terrible returns for years from that point, because although the underlying companies mostly did very well, their stock prices had simply gotten too expensive, meaning too far above their otherwise good fundamentals. It took a long time for their fundamentals to eventually catch up to their elevated stock prices, meaning that there was a lengthy period of poor stock returns.

The fundamentals and technicals together suggest that this is unlikely a great time to buy Apple.

Zac also posted a chart for Amazon to have a very significant correction, which is pretty brave chart to post, since that is a very contrarian idea:

Although to be fair, that’s where the stock was just three years ago. Stocks get pullbacks to 3-years-ago price levels all the time; it’s just that Amazon’s performance has been so spectacular that even a pullback to where it was 3 years ago would be utterly massive relative to today’s price.

I personally don’t have $1,000 as my base case, so unlike Apple, Amazon is not the feature of this week’s issue. The fundamentals and technicals do not necessarily align for Amazon, as they do for Apple. However, I still want to go over this to see how such a scenario could play out.

First of all, Amazon doesn’t make much of a profit. And by that, I mean they make a huge $10 billion profit, but that otherwise large sum is less than 1/5th what Apple makes, even though Amazon’s market capitalization is in the same ballpark as Apple’s.  So, compared to Amazon’s $1.3 trillion market cap, their profit of “only” $10 billion still gives them a P/E ratio of well over 100.

Instead, Amazon has historically tended to trade tightly in line with its operating cash flow growth, and/or its EBITDA growth. Here is the F.A.S.T. Graph for Amazon’s valuation relative to cash flow: 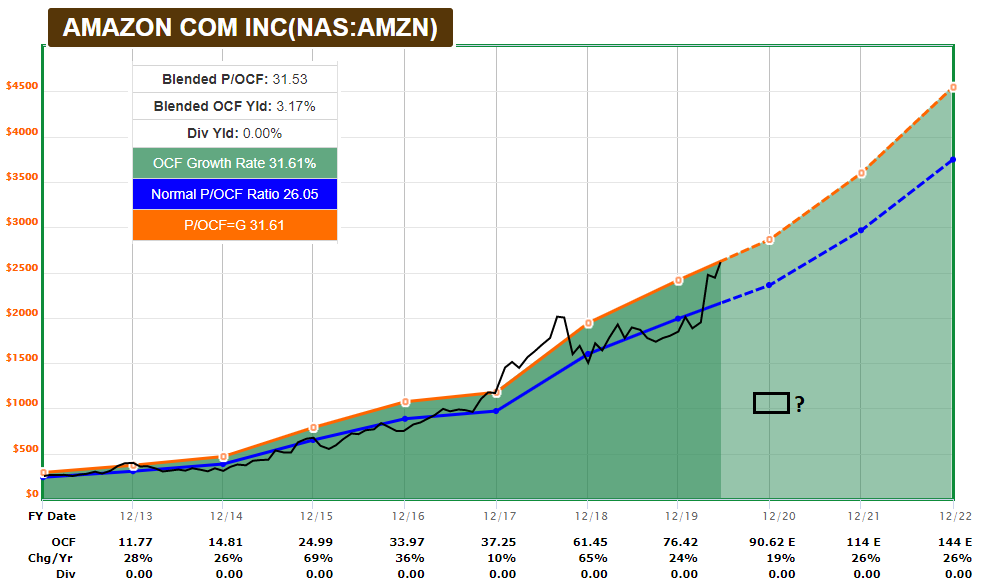 And here is their chart for free cash flow: 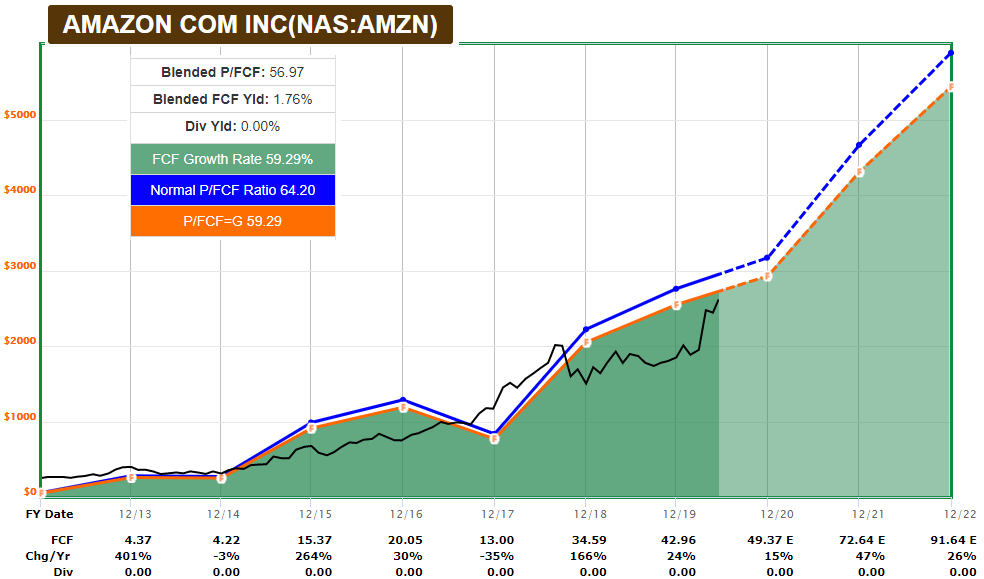 Amazon has about a $20 billion annual free cash flow baseline at the moment, which means their price/FCF ratio is in the upper 50’s, which is quite high. Analysts expect this to grow.

From an EV/EBITDA perspective, the stock is roughly in line with its historically average valuation: 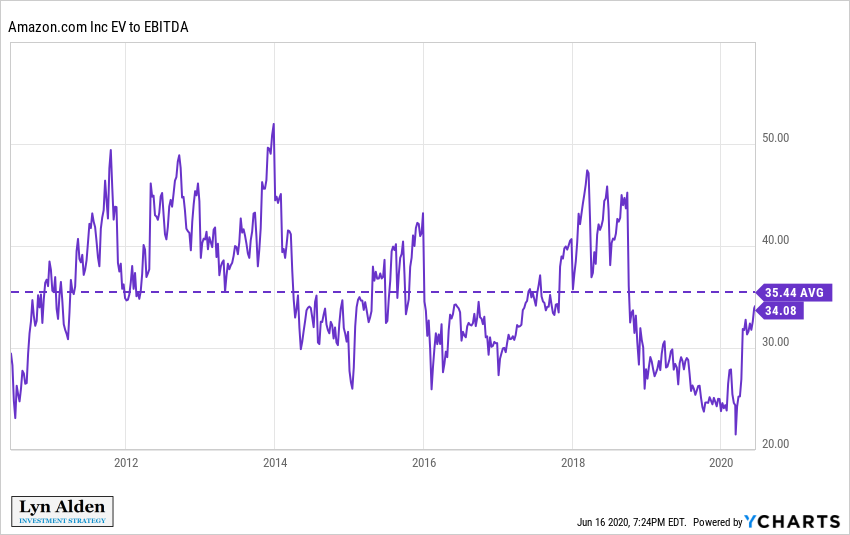 However, Amazon’s growth rate is declining over time, despite remaining very high: 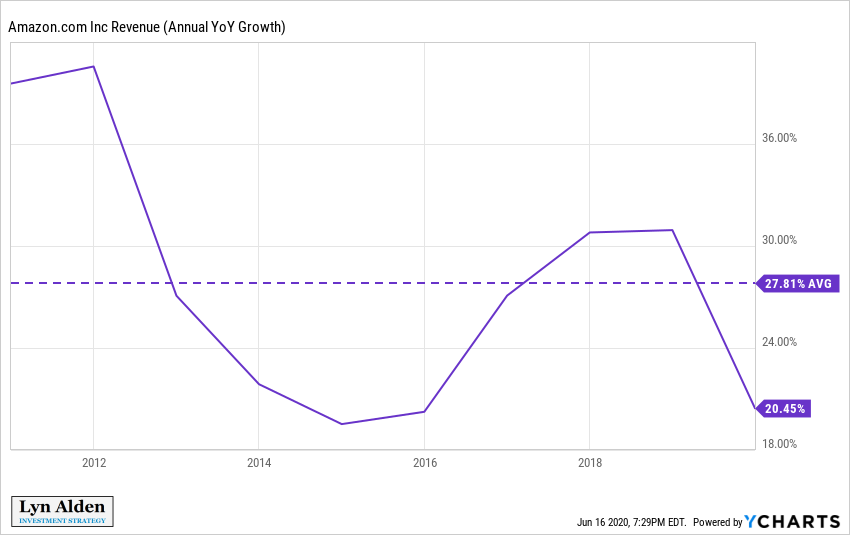 This is natural for a company so large.

However, I would expect “fair value” to be a bit below its historical average valuation level, which can be defined over various time frames and using various metrics. That’s how companies mature; their growth slows and their valuations come down over time. Amazon has consistently pushed the boundaries for both longevity-of-growth and the valuations surrounding that growth.

While I think Amazon is very expensive, I hesitate to say that it is overvalued according to fundamentals, because it simply continues to trade in line with how it consistently has done so over the past decade. What’s the catalyst for it to adopt a significantly different valuation regime in the near future?

One possibility for a much lower valuation is an increased prospect for anti-trust regulation. Several politicians, ranging from Donald Trump to Elizabeth Warren, are not thrilled with Amazon from a regulatory point of view. Amazon has some monopoly and anti-competitive aspects to them. In addition, or perhaps because of this, the company could also face higher costs, and thus fail to meet some of the optimistic future growth rates that are shown on the F.A.S.T. Graphs. Could Zac’s potential peak on the sentiment chart be indicating this, that investors are so enamored with Amazon’s seeming invincibility, that this similar sentiment could result in political backlash against them?

A second possibility for a much lower valuation is a secular shift from disinflation to inflation. A higher baseline inflation rate would discount future growth more aggressively, meaning it would be an environment that generally favors value stocks (whose fair value estimate is derived mainly from present operations, due to low growth forecasts) over growth stocks (whose fair value estimate is derived from the distant future, due to high growth forecasts). If investors decide to slap a 30 P/FCF valuation multiple on Amazon instead of well over 50, that nearly cuts the price in half, for example.

So, investor sentiment and regulation are both important for Amazon’s stock. Left unchecked, meaning that if government regulation doesn’t get in their way, and nothing else triggers materially higher costs, and investors continue to place a high valuation on the stock by only lightly discounting future earnings expectations, there’s not much stopping this “machine” from continuing to reach eye-watering stock price levels. On the other hand, a shift in investor sentiment, or a political decision that Amazon has become too uncompetitive, could coincide with a material correction.

Investors are willing to pay up for growth and safety, but only to certain level. Periods of market euphoria can drive prices above those levels, but gravity eventually becomes strong up there.

In my view, despite technically being the cheaper of the two, Apple is a clearer case of high valuation relative to some of the other risk-adjusted alternatives that investors could move into. High valuation levels can turn an otherwise safe investment into a risky one, and that is where I view Apple today. I’d be quite cautious with Apple at these levels.

Amazon is a harder case for me. Unlike Apple which totally broke out of its valuation level despite sluggish growth, Amazon continues to have a fast growth rate and to trade in line with valuation levels that are normal for the stock. However, it has higher absolute valuation levels, and is perhaps more vulnerable to regulation or a shift in investor sentiment, if investors collectively decide they no longer want to place such a high multiple on it. I have no particular opinion on Amazon at this time, unlike Apple.