Zac and Garrett provided a ton of new charts for stocks I am following, so let’s dive right into a rapid-fire issue of “Where Fundamentals Meet Technicals”.

As a defensive stock, Amgen (AMGN) has underperformed in recent months along with other healthcare and utility and consumer staples and tech stocks as traders much preferred cyclical re-opening plays. In addition, Amgen growth is expected to be weak in 2021.

However, Amgen has a solid balance sheet, and an attractive valuation for its long-term growth rate and multi-year forward growth potential. It’s one of the more diversified biotechnology stocks, and has been a reliable compounder with a current dividend yield of nearly 3%.

As far as the technicals ago, Garrett sees quite a bit of bullish potential here:

The FAST Graph also looks great for investors that take a multi-year view: 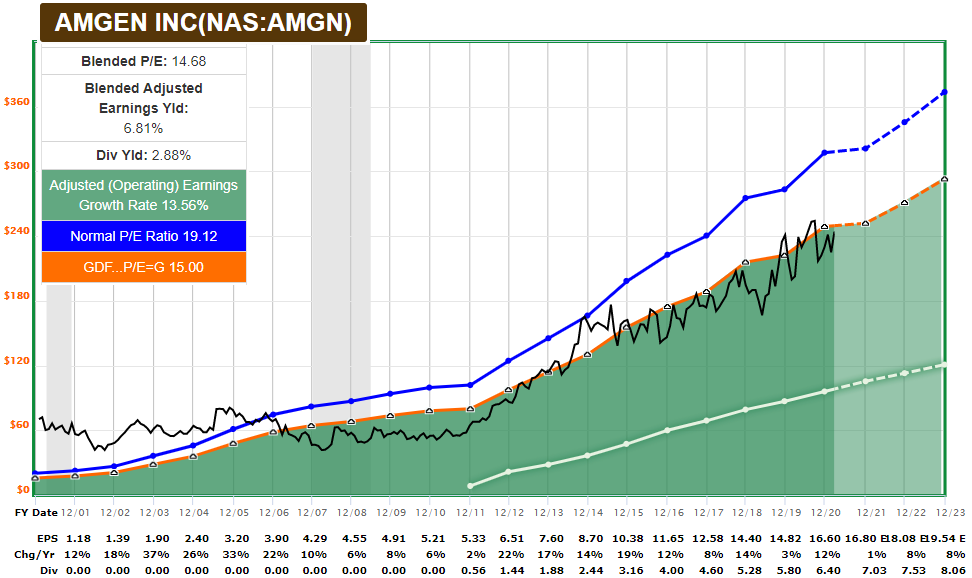 Cigna (CI) is a large health insurer and pharmacy benefits manager, and is in many ways a quintessential “value” stock. There are long-term valuation headwinds over the health insurance industry regarding potential regulation or increased government involvement. Cigna trades at a low double-digit earnings multiple despite also having solid growth, as per the FAST Graph: 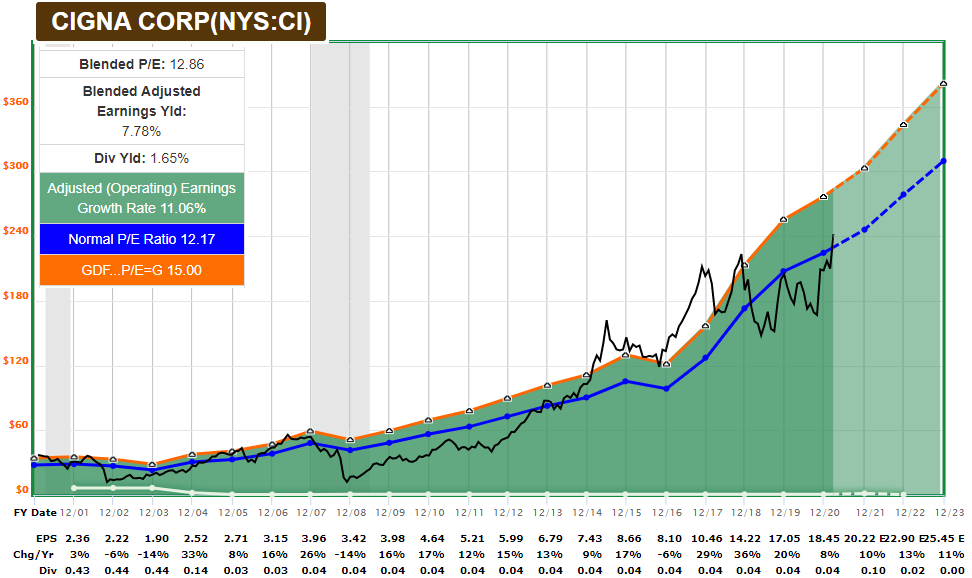 Garrett has a rather bullish outlook for the stock:

Garrett has been correctly bearish on Facebook (FB) for a number of months now, but more recently he has been pivoting bullish. Here’s his latest chart:

For its growth rate and balance sheet strength, Facebook is very cheap. The PEG ratio is low, and the company has over $60 billion in cash-equivalents with zero debt. They own Instagram, Whatsapp, Oculus, and a host of other investments in addition to their namesake brand.

However, Facebook has regulatory overhang around it. A number of governments are pushing back against big tech, especially the intersection between tech and media. And Apple is planning to launch a feature on its phones and tablets that will require apps to get explicit permission to do ad targeting, which would reduce Facebook’s margins.

Apple is positioning it as a privacy improvement, while Facebook is countering with advertisements that it will hurt small business. Apple’s appeal is naturally resonating much better with people, and overall, it shows some of Facebook’s vulnerability to changes in regulations or privacy settings.

That being said, sentiment is pretty weak for Facebook’s stock, the current valuation takes into account a growth rate reduction, and the balance sheet is outrageously good. Either analysts are utterly wrong about Facebooks' earnings estimates for the next few years, or buckle up for a nice run higher in terms of stock price. 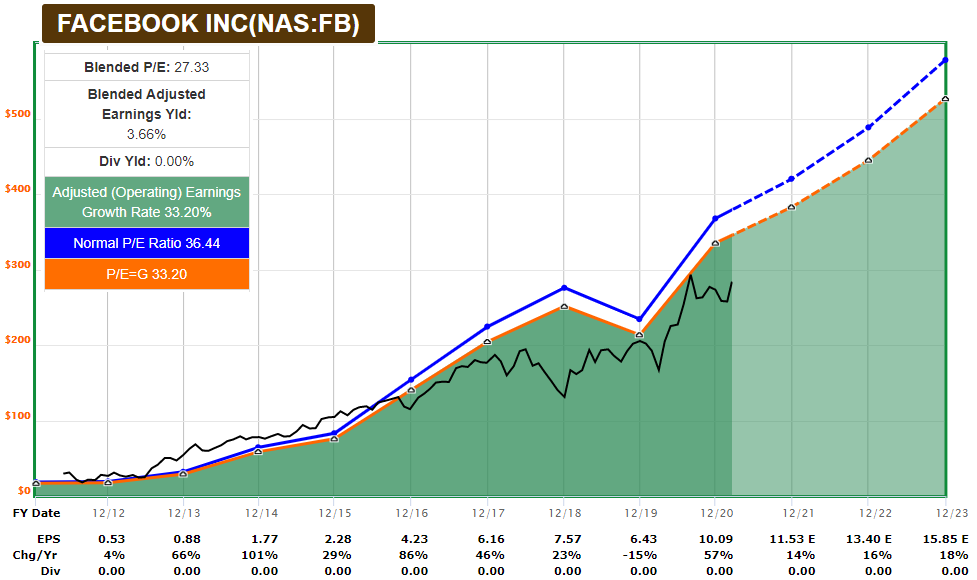 Fiserv (FISV) is one of the largest technology providers to banks. It grows through many small acquisitions, and has a wide economic moat due to very high switching costs for its clients. It is digesting its recent large acquisition with plans towards deleveraging. Meanwhile, its growth is quite strong and its valuation is reasonable for the expected level of growth, as per the FAST Graph: 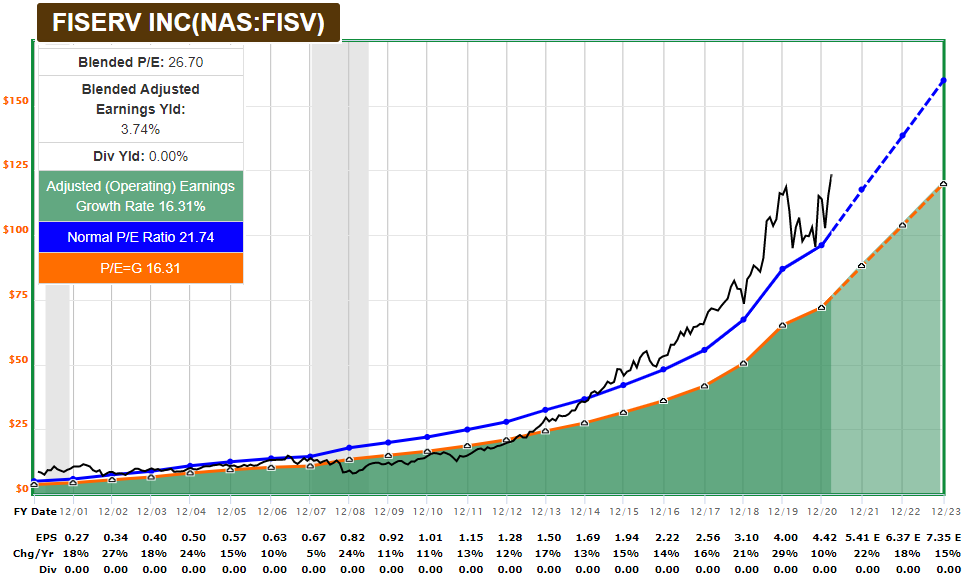 Garrett’s chart suggests that technicals align with fundamentals as well:

eBay (EBAY) continues to bounce around at reasonable valuations: 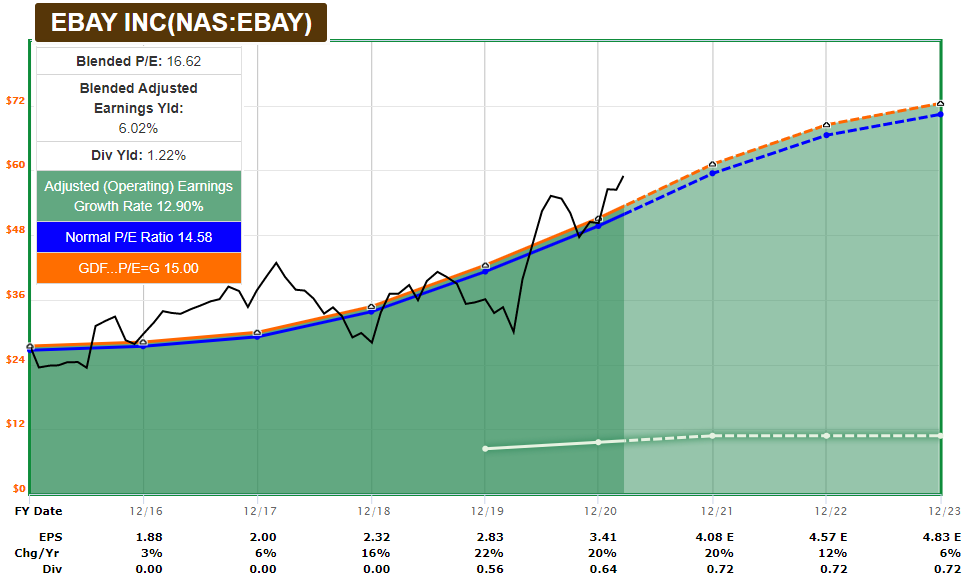 The company ranks well by the Greenblatt “magic investing formula”, meaning it has a combination of high returns on invested capital and reasonable valuations. In addition, eBay divested their non-core operations and switched up management in recent years, which I believe will continue to serve them well and continue to help them get out of the growth slump they used to be in.

Zac’s technicals are a bit more bullish than my base case (even though I’m long the stock), but point in the same overall direction of the fundamentals:

Freeport-McMoRan (FCX) the copper miner has had a heck of a run. I originally recommended it back in June 2020 at a little over ten bucks a share, and now it’s in the mid-$30s.

I recently sold out of my position, as I discussed I would do in recent reports. It’s not that I’m bearish on it; it’s that it came so far so quickly. 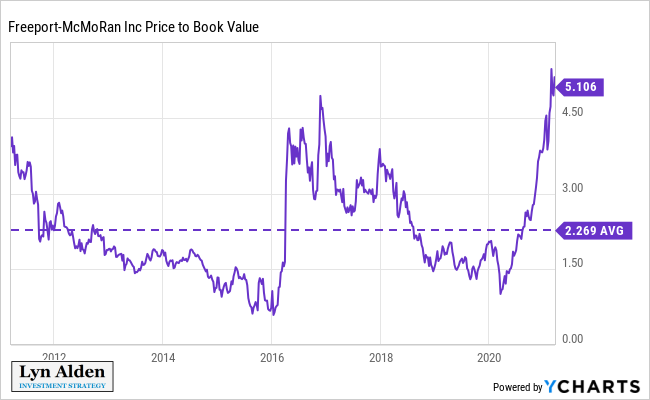 And their price-to-cash-flow ratio is also quite high: 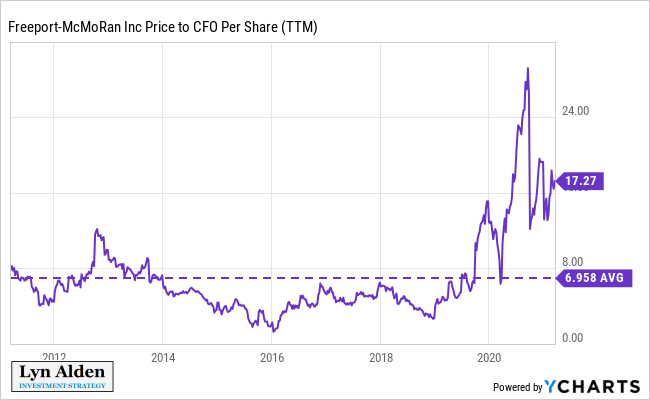 It’s normal for cyclical stocks to have high apparent valuations during periods of cyclical weakness, because their earnings tend to be low during recessions and high during booms. If copper prices stay at these levels or move up further, Freeport should do quite well.

However, after such strong performance and valuations that are quite stretched, a lot has to continue to go right in order to produce strong returns. I’d rather see a correction or consolidation for a while.

Zac indeed is looking for the possibility of a pullback to the mid-$20s, which fundamentally would make a more attractive re-entry point. The mid-$30s is quite rich.