The market once again followed through on our analysis last week.

What actually happened:  We got continued strength into Wednesday, hitting a high of 2923.5 before selling off from there.

We tried to clear the 2915-20 zone on the Emini S&P 500, but it rejected from just above and sold off right back into and below the zone. And there was some pretty good volume off the top. This does suggest a decent chance that the top on Wednesday was important. However as we have also seen many times, bulls can always come back with a bang and take the market much higher than we expect. As of now, I am viewing that 2923.5 top as important but if we clear it, we should get up to the 2945-50 zone we were looking for last week which could be an important top.

But same as I said last week:  "Remember however that this is just speculation for now and we should have no plans to attempt shorts unless our mechanical models actually tell us to do so. Most market participants ignore what the market is doing right now and try to look at what it might do in the future often without any real reason except that it has gone too far in one direction.. our Smart Money room models tell us what is the path of least resistance right now and we position ourselves with it - this is what makes our indicators and models powerful and worth following."

Here is a snapshot of the Smart Money Room Indicators and Trades. Green is active. Grey is closed. 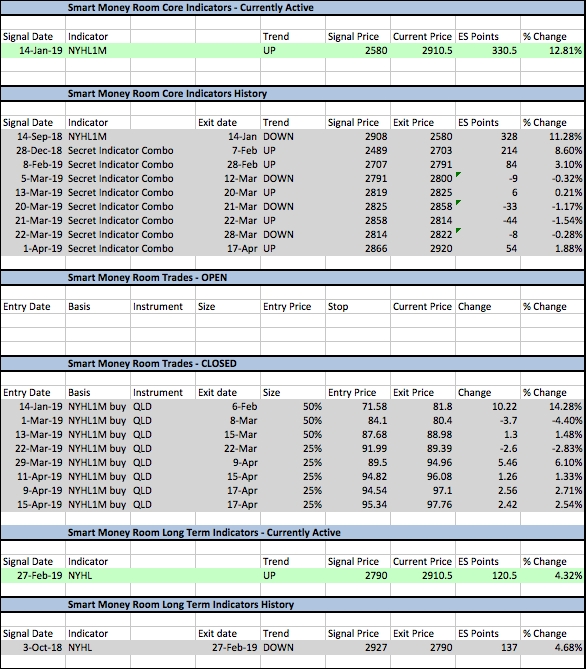