In addition to my twice-monthly deep dive fundamental reports, each week I also publish a piece that covers a few stocks where the fundamentals and technicals both suggest a similar outcome, either bullish or bearish.

Fundamentals include things like growth metrics, balance sheet strength, macro factors affecting the business, and valuation. Technicals include Elliott Wave charts, relative strength, MACD, support/resistance zones, and so forth, and I reference Zac and Garrett’s work for that portion. 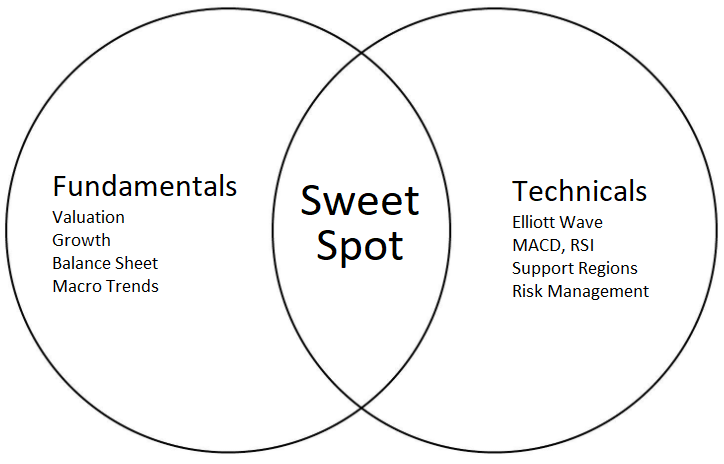 Sometimes I initiate coverage on stocks in these pieces, and other times I provide fundamental and technical updates on stocks that I have existing coverage for.

The short version is that both fundamentals and technicals are just probability assessments of future stock outcomes, and including both together helps to increase the percentage of hits.

As a long-term investor or “position trader”, I often buy things with an intention to hold for 3-5 years. This is a tax-efficient way to compound capital, since it is very scalable.

To do this, I buy shares of a business whose revenues, cash flows, dividends (if any), and balance sheet strength are likely to improve in the years ahead, while the valuation should act as a tailwind as well. The value of my shares increase over time, and the company may also spin off regular cash dividends as well, which I can reinvest into more shares or spend them.

Let’s take a typical growth stock as an example. In the chart below, the black line represents their core structural growth. The red wave represents what their actual business results might be over time, as cyclical factors affect the specifics of their business, with various tailwinds or headwinds during a given year. The purple wave represents what the stock price of that business might be, as investors tend to enthusiastically overprice it when things are going particularly well, and tend to underprice it when things get a little tough. 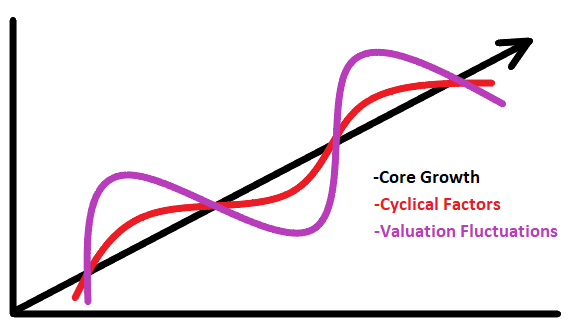 Long-term investors can choose to just buy and hold and dollar-cost average into it, and let the structural story play out. I think that’s a good approach for many people.

Especially when it comes to starting new positions in stocks I’m bullish on, I’d prefer not to buy into a clear downtrend. I’d like to see it starting to turn up, starting to show evidence of a local bottom with positive technicals, while the long-term fundamentals are in its favor.

The reports are also useful for swing traders, who have a time frame of weeks and months. All else being equal, it’s better to bet on an undervalued stock reverting to its historical average valuation, than an overvalued stock getting even more overvalued, for example.

So when technicals show evidence of an oversold bottom with momentum indicators turning up, while at the same time the stock is pretty cheap and has a good long-term outlook, that’s often a good buying point. The signs to exit would be that the stock is getting quite expensive again, that technical signals are showing signs of being overbought and ready for a correction.

Sometimes technical charts look positive, but the stock is already very overvalued or has a weak balance sheet. It can be useful to know these things before investing, since it could reduce the probability of success.

Tools of the Trade

In addition to reading SEC filings and looking at investor presentations, my favorite toolbags are F.A.S.T. Graphs and YCharts. These provide good visual information on fundamentals, with many different metrics to use within them, which makes them particularly well-suited for sharing an investment thesis with an audience. 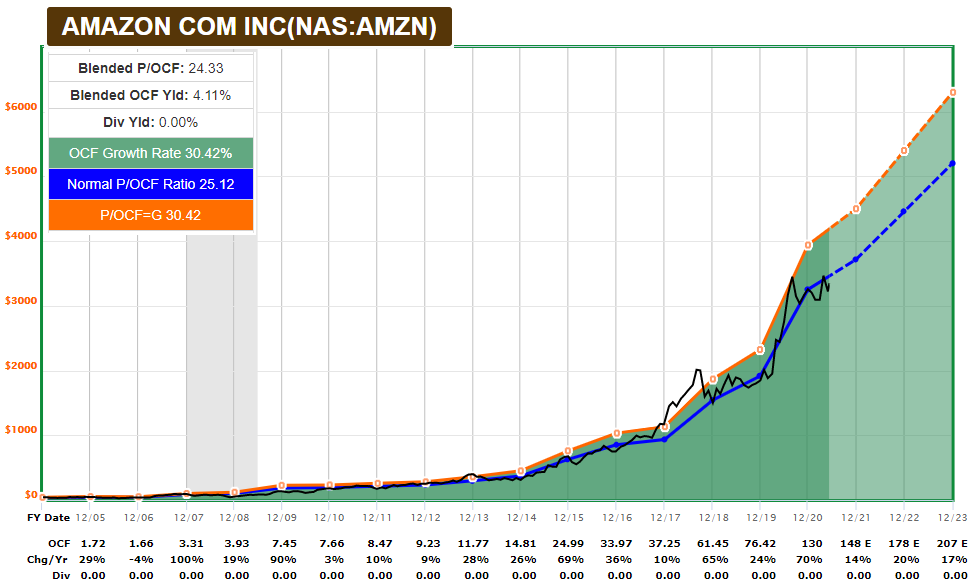 We can see that when the stock became more expensive than usual, it generally entered a period of correction or consolidation until fundmanetals caught back up. As Amazon matures and slows down, we  should expect the valuation multiple to gradually decrease, but so far this has been a very strong relationship.

If we pull out YCharts, we can look at other metrics like the changing profit margin and return on invested capital over time. In Amazon’s case, they have both been heading higher: 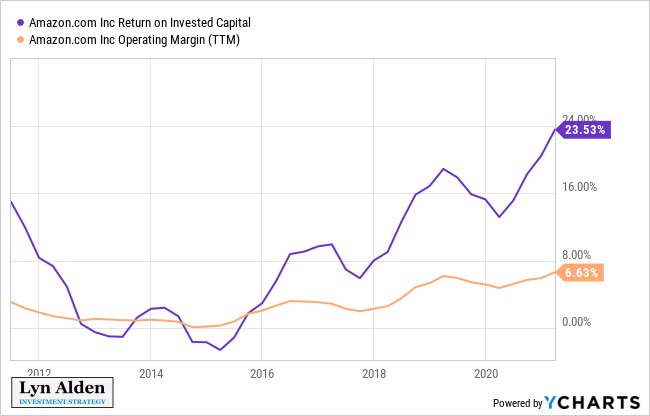 This upward trend is due to Amazon’s cloud business. Online retail was never a particularly profitable business, but as Amazon Web Services hit critical mass, that has become a key profit driver for the company.

Understanding fundamentally what it does is helpful for a long-term investment thesis. It transports products, and thus is not too tied to their price fluctuations but is tied to their volumes in the US. Additionally, crude oil represents a pretty small piece of what it does: natural gas, natural gas liquids (especially), and petrochemicals together represent the vast majority of their business, and these lines of business are more “future proof” against things like electric vehicles.

The F.A.S.T. Graph shows that it has typically traded at around 21x earnings (blue line). For a stock with a high yield and slow growth rate, F.A.S.T. Graphs also shows an orange line with a default 15x earnings multiple. The white lines represent the annual dividends/distributions over time, and we can see that they never had to cut dividends/distributions during a recession or energy price crash. 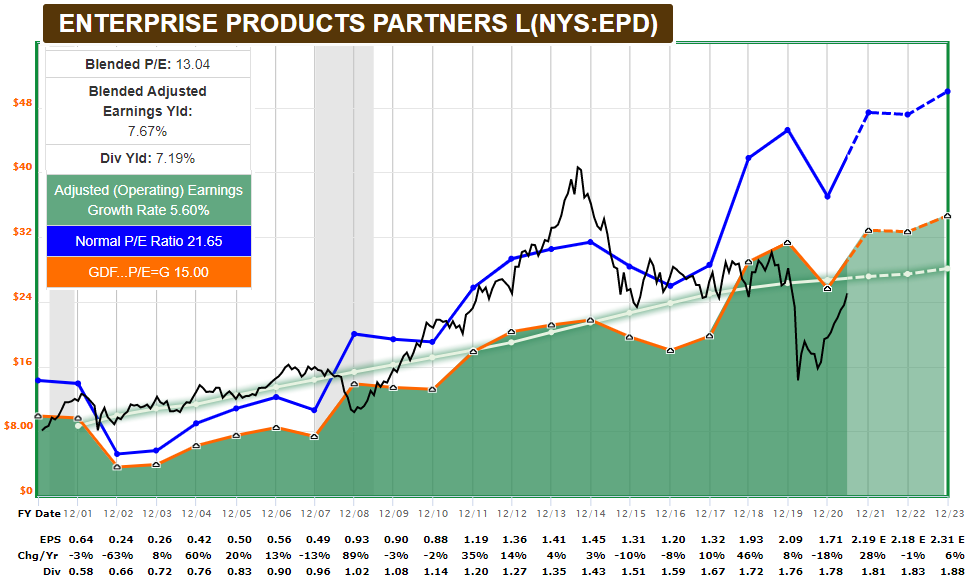 We can also look at free cash flow for the business, and see that in recent years, they shifted from external financing to self-financing. In other words, they started growing more slowly but also more sustainably, generating free cash flow and not relying on issuing equity for capex like they used to. 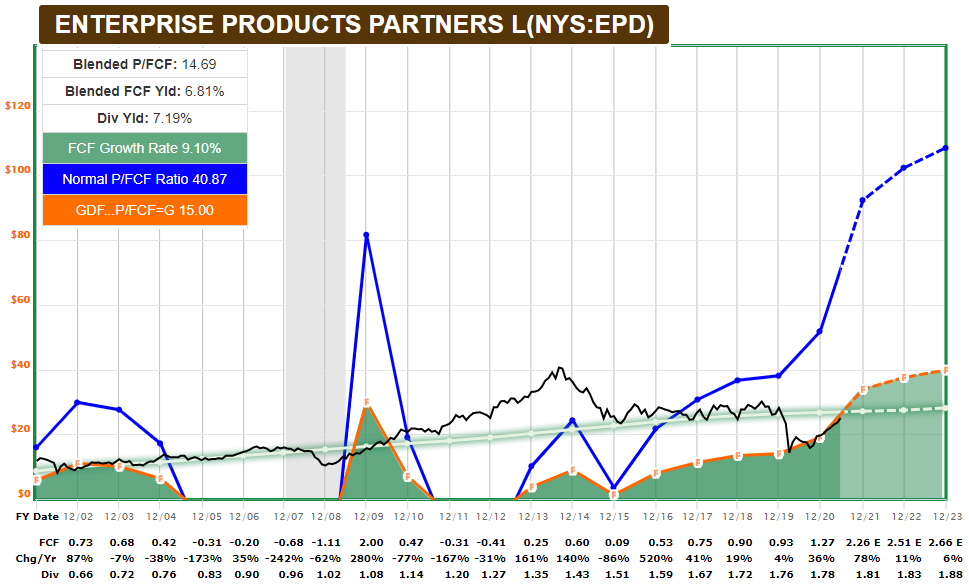 If we pull out YCharts and compare EPD to another large energy transportation company, Energy Transfer LP (ET), we can see how conservative EPD is with its leverage. It has about 4x debt/EBITDA (which is quite reasonable for this industry), whereas ET is more leveraged at 8x debt/EBITDA. 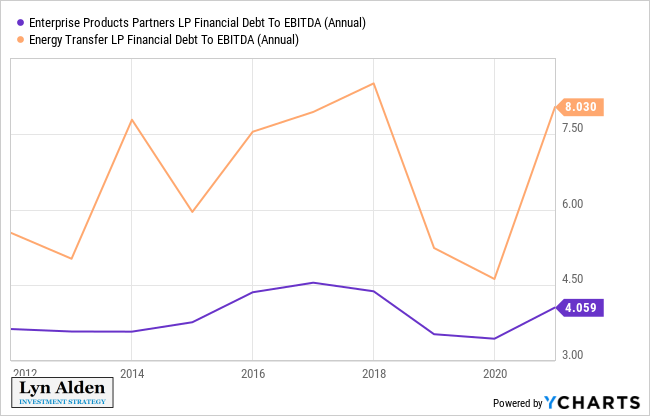 That doesn’t mean EPD will necessarily outperform ET. In fact, during bull markets, a more leveraged entity like ET could very well outperform. However, it tells us something about risk which is why it’s important to be aware of. ET had to cut its dividend/distribution in 2020, for example, in order to protect its balance sheet. EPD has a much better credit rating (BBB+ vs BBB-) and more financial “space” to work with during difficult environments, which all else equal leads to a safer dividend/distribution.

Although not without risk, EPD is closer to a “set and forget” type of investment while ET has to be watched more closely.

Understanding the fundamentals of an investment can benefit long-term investors and intermediate-term traders. It’s generally best to find situations where the fundamentals and technicals are both on your side.

Valuations and balance sheets don’t tell us much about near-term price action, but keeping them in mind helps reduce tail risks. Meanwhile, even analyzing all of the fundamentals can’t tell us for sure what will happen, which is why looking at technicals and price confirmation helps us know if an investment is working out as expected, along with various support levels to watch out for.