There's a new Fed balance sheet update this afternoon, which makes for a nice liquidity update.

Over this past week, the Fed continued the trend of permanently buying securities, like Treasuries and MBS, while winding down temporary operations like central bank liquidity swaps. The net was result was a $28.6 billion increase.

If we isolate Treasury purchases and look at their weekly purchases over time, it looks like this: 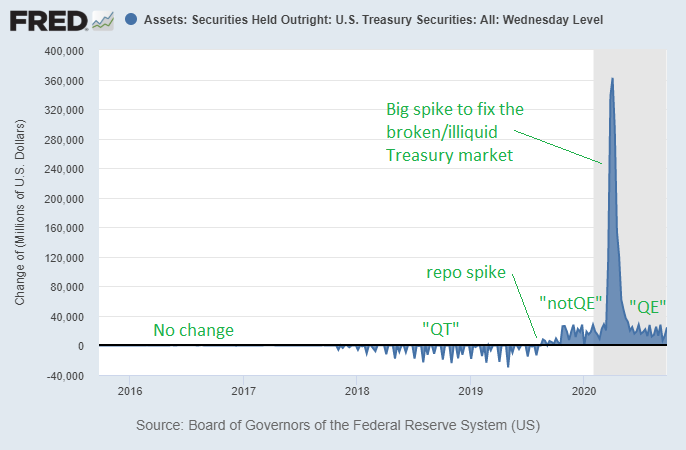 The Fed has been running at a roughly $80 billion per month Treasury purchase rate for a while, and bought a ton more in March and April when the Treasury market froze up (as hedge funds and foreign markets abruptly sold Treasuries and there weren't enough buyers). 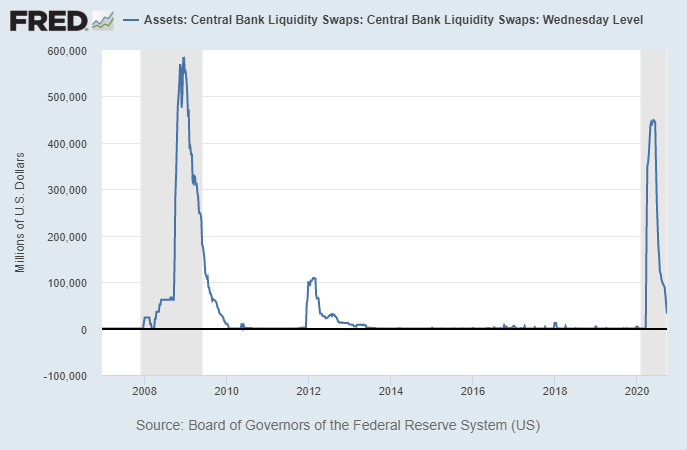 After reaching a peak of roughly $450 billion in liquidity swaps with foreign central banks, this total is almost entirely drawn down, to just $32 billion, including a $20 billion drawdown this week. It's important to note that these swap lines are still active; the Fed is not drawing them down. Instead, they are maturing and not being rolled, meaning that there is virtually no demand for them at this time.

The T-bill/Eurodollar spread remains very low, indicating that there is not currently a lot of offshore USD liquidity problems, at least outside of certain troubled EMs. 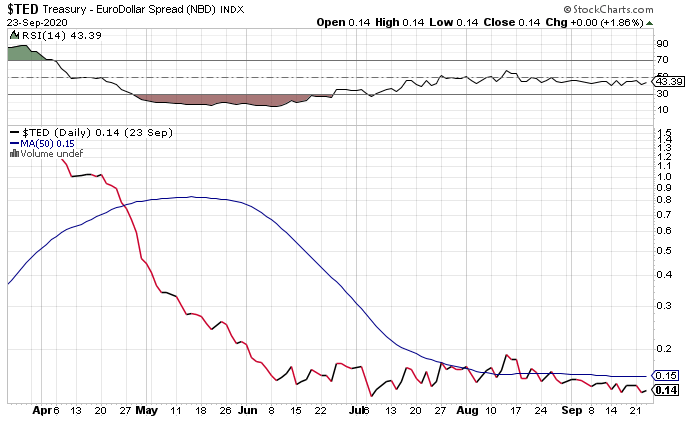 The Fed continues to be engaged in "QE infinity", as a perpetual buyer of Treasuries. However, with so much Treasury issuance happening, they are actually not really adding net liquidity anymore. I expect that they'll bump up their Treasury purchase rate in the future, but maybe not until whenever the next round of stimulus happens and more Treasury issuance occurs.

In a few weeks when central bank liquidity swaps probably drop off the balance sheet, the total weekly Fed balance sheet change should begin to increase faster, as the Fed's outright security purchases of Treasuries and MBS won't be offset by swap line reductions.