European indices as well as indices in the Americas pulled back for the most part last week after starting initially higher.

DAX: The DAX Performance Index started off initially higher last week, but then proceeded to pullback as expected in what should be wave ii of (c). Price has already reached the .500 retrace of wave i on this pullback, so more than enough to satisfy a bottom. However, with no indication of a local low already in place, a test of the .618 retrace at 12300 is still possible before turning back up. Otherwise, a break above 12435 is the initial indication that wave ii has completed and price is starting the next move higher as wave iii of (c). 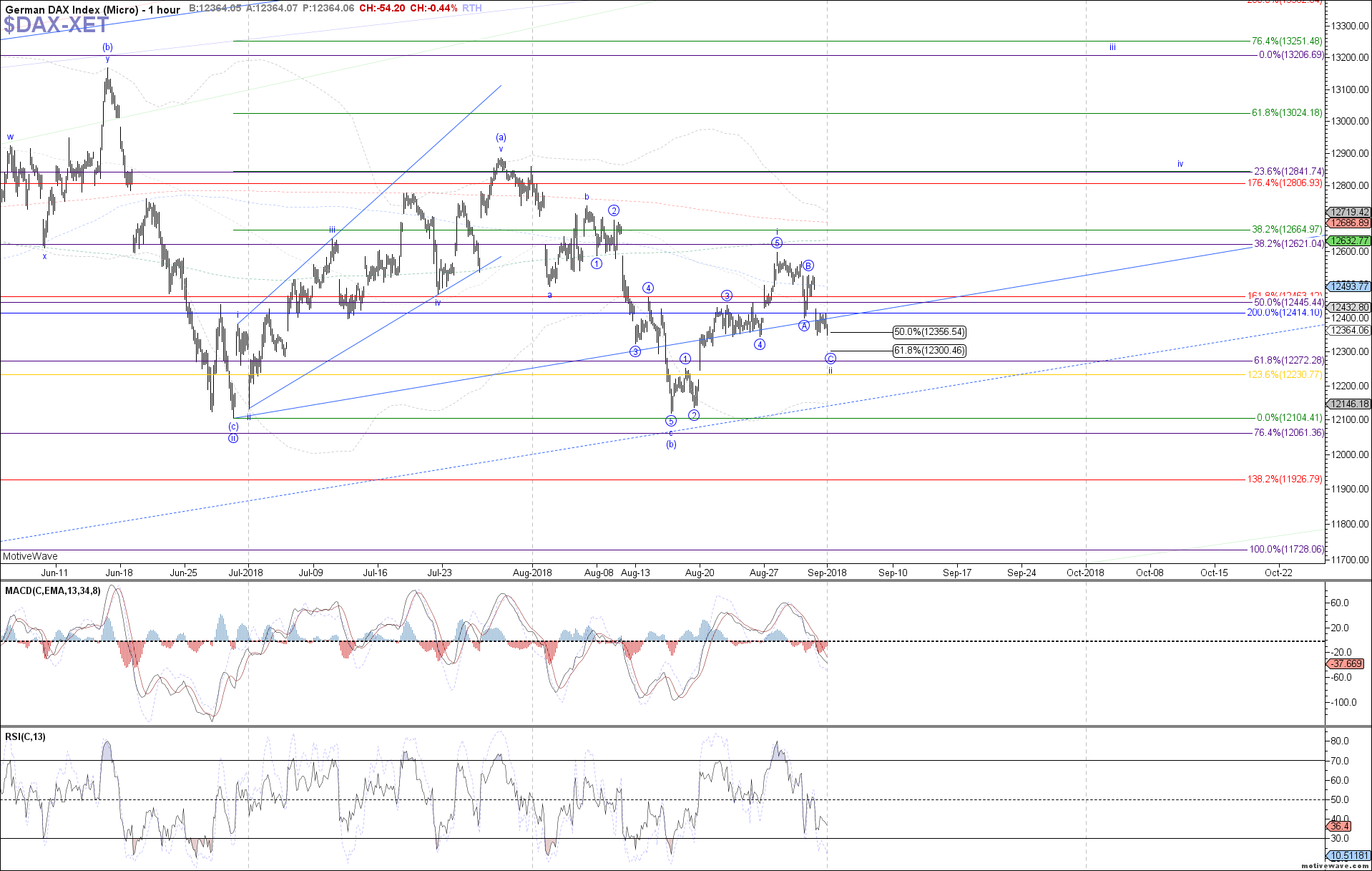 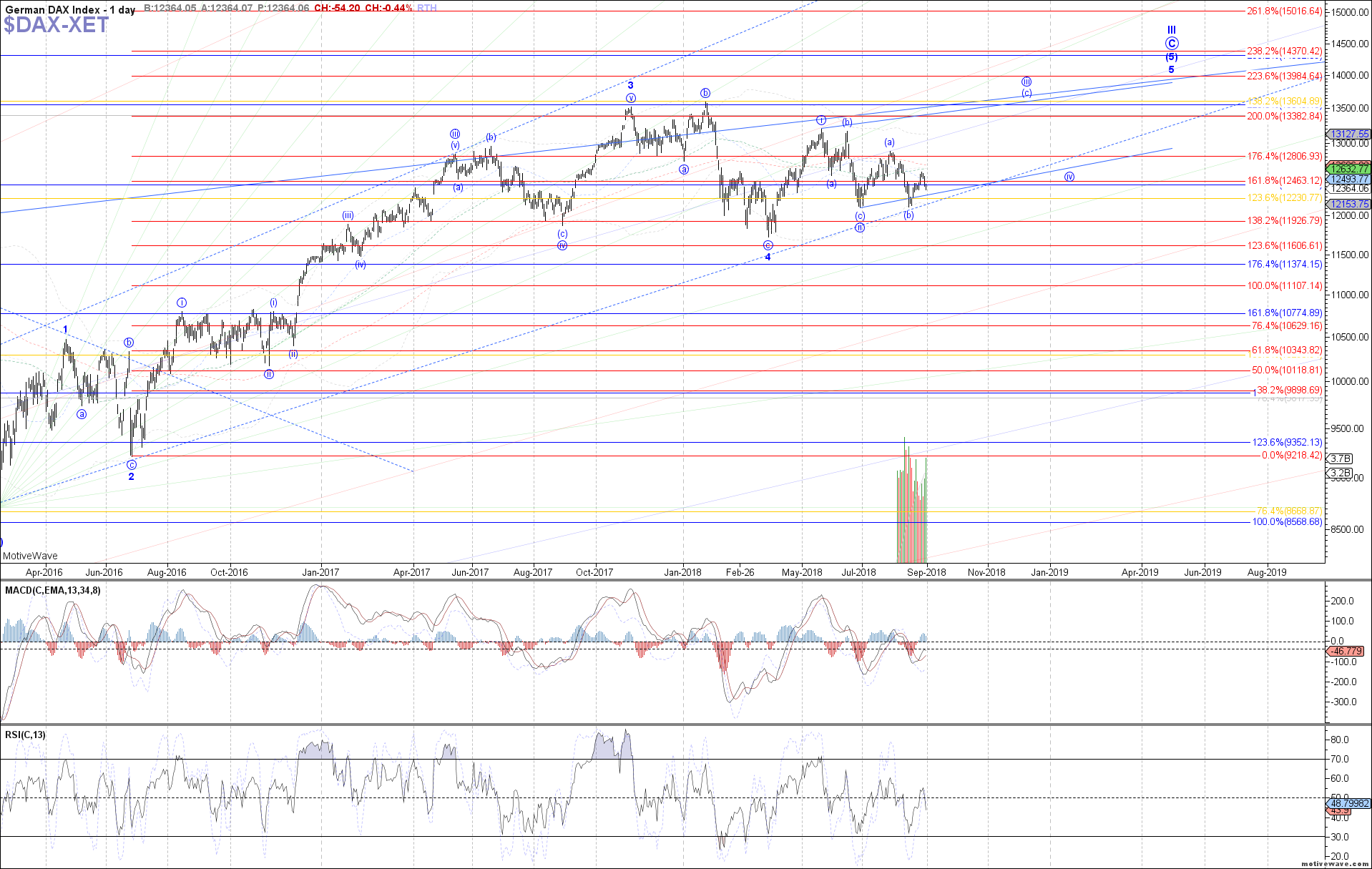 FTSE: The FTSE 100 traded lower last week, eventually breaking below the previous August low. Therefore, the correction off the May high as blue wave iv or red wave ii still appears to be in progress. 7400 – 7350 is the next fib support below to watch for another potential bottom to form, with a break back above 7525 as the initial indication that a bottom is already in place. 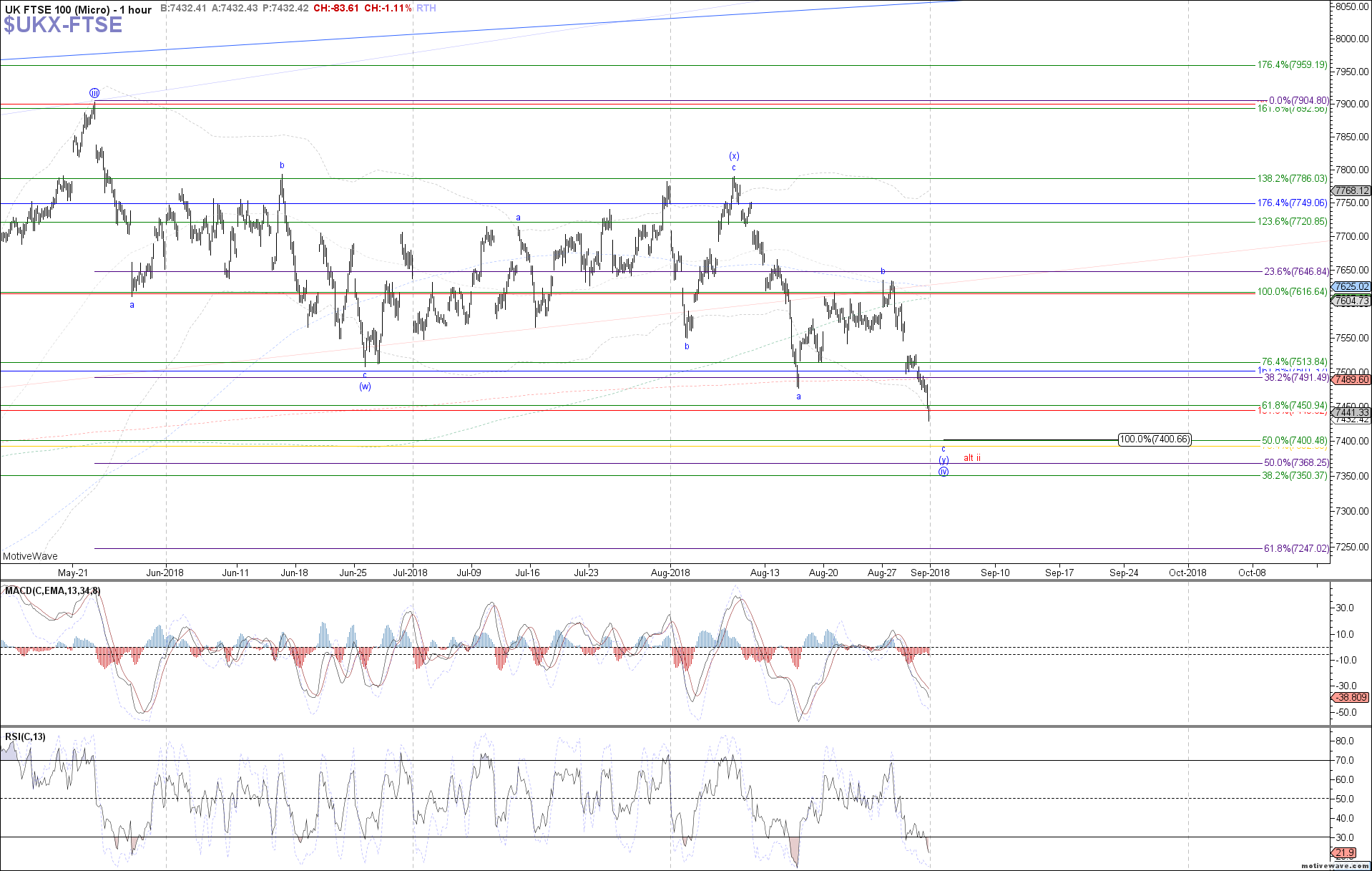 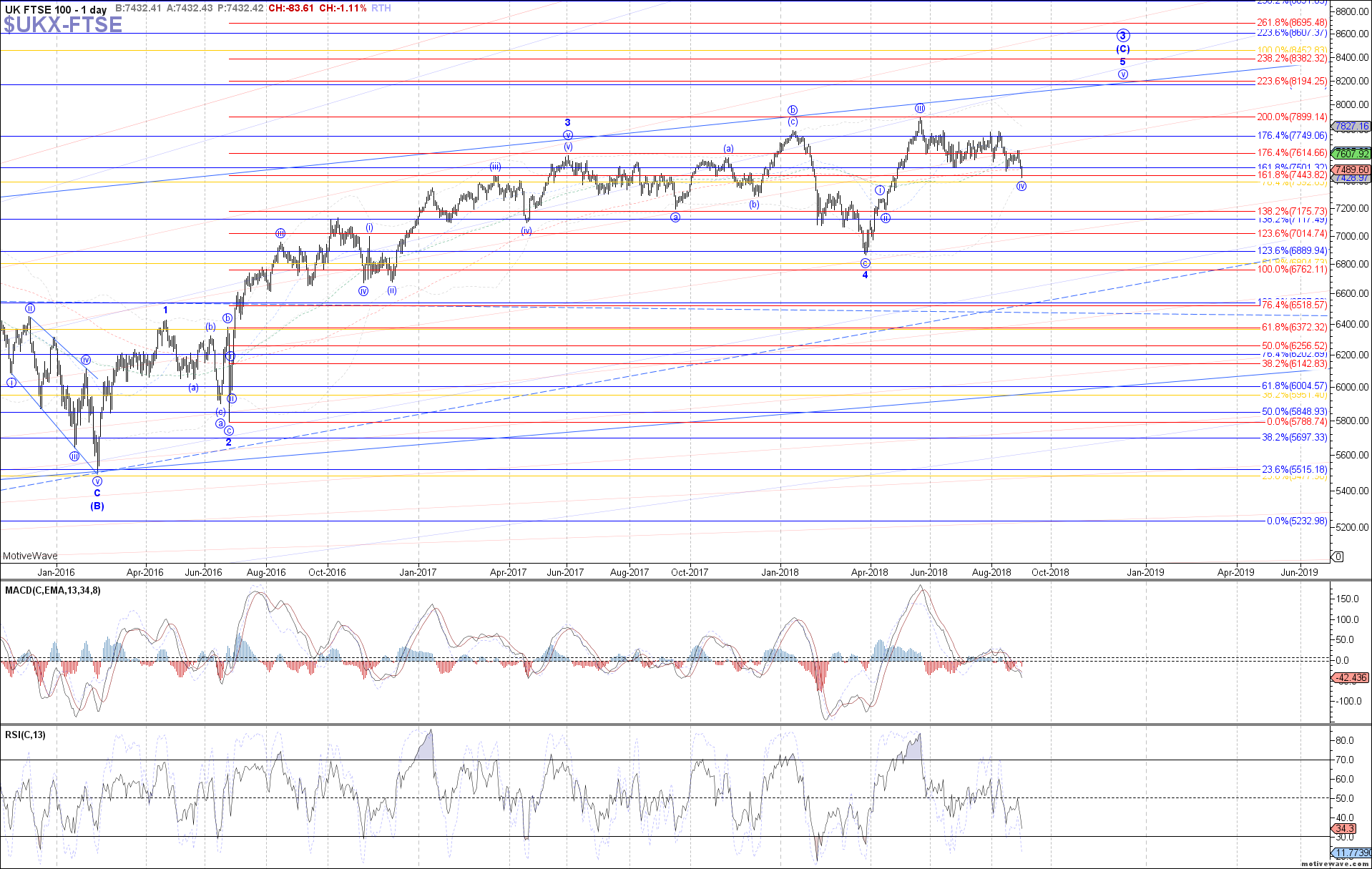 STOXX: Similar to the DAX, the Euro STOXX 50 traded initially higher last week, but then proceeded to pull back in the anticipated wave ii of (iii). Price has already reached a .618 retrace of wave i of (iii), so easily enough to satisfy a bottom for wave ii. However, with no indication of a local low already in place, price may still want to test the .786 retrace at 3370 before turning back up in wave iii of (iii). Otherwise, a move back above 3420 is needed to start suggesting a bottom already in place. 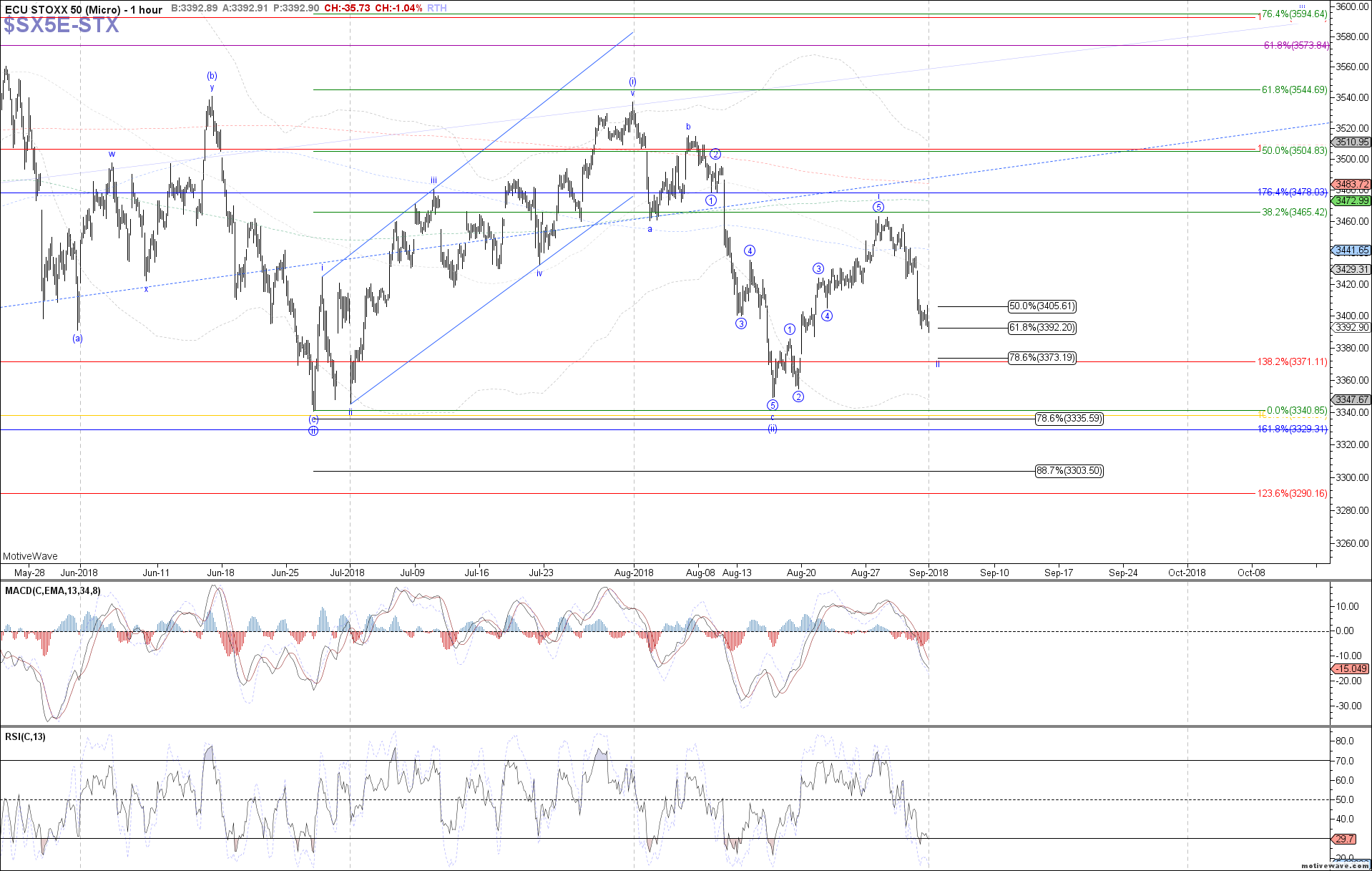 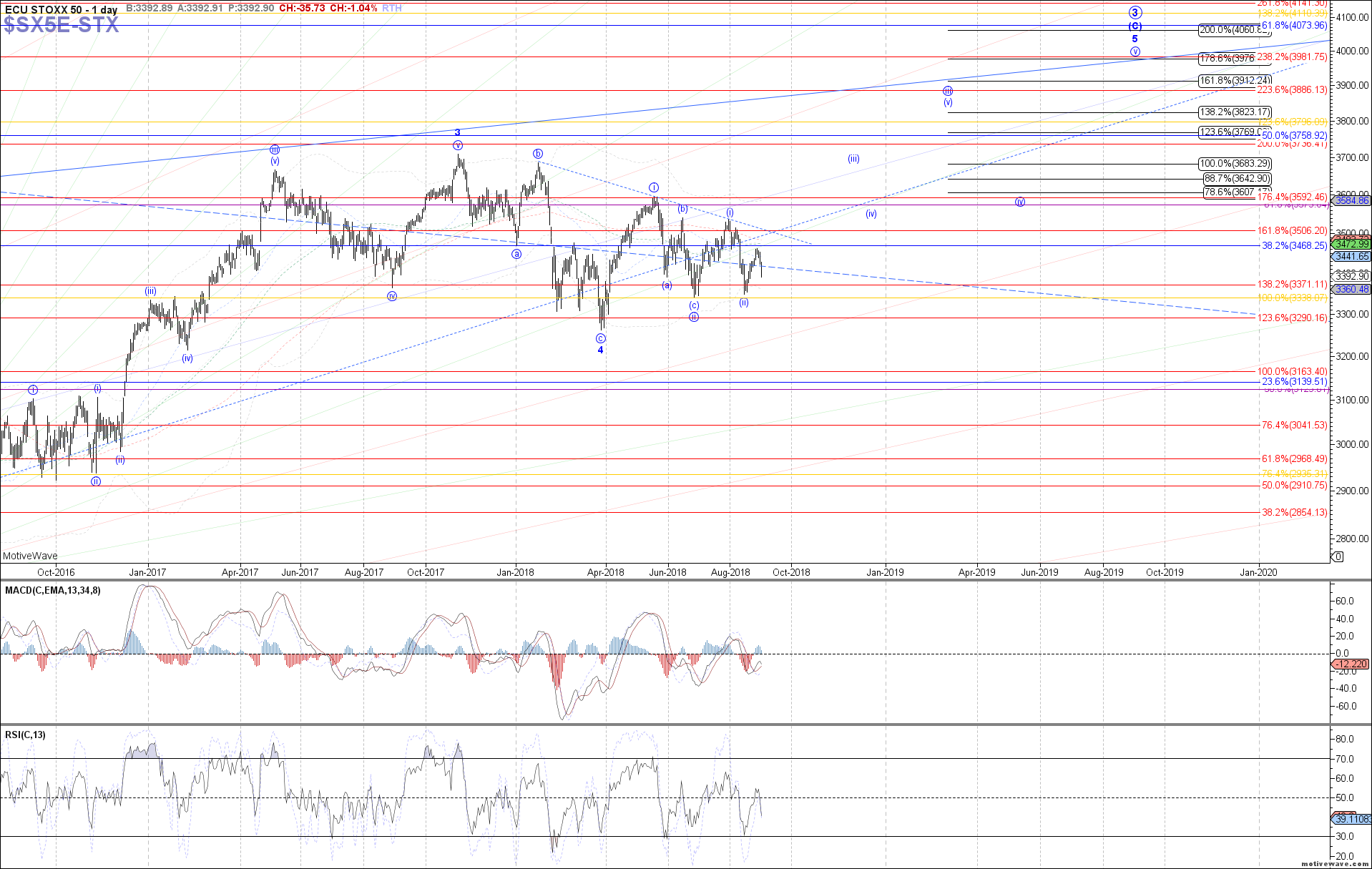 IBOV: The Ibovespa Brasil Sao Paulo Stock Exchange Index started off initially higher last week as well, but didn’t quite make it to the 79220 fib target for wave i of 3, and also did not provide a clear 5 waves up off the August low. Therefore, we’re still left without good confirmation that a wave 2 bottom is in place and price is beginning wave 3, although I remain open to that potential. If not though, then this bounce would likely be a b-wave in a larger wave 2, with 74000 as the next support below if a new low is made. 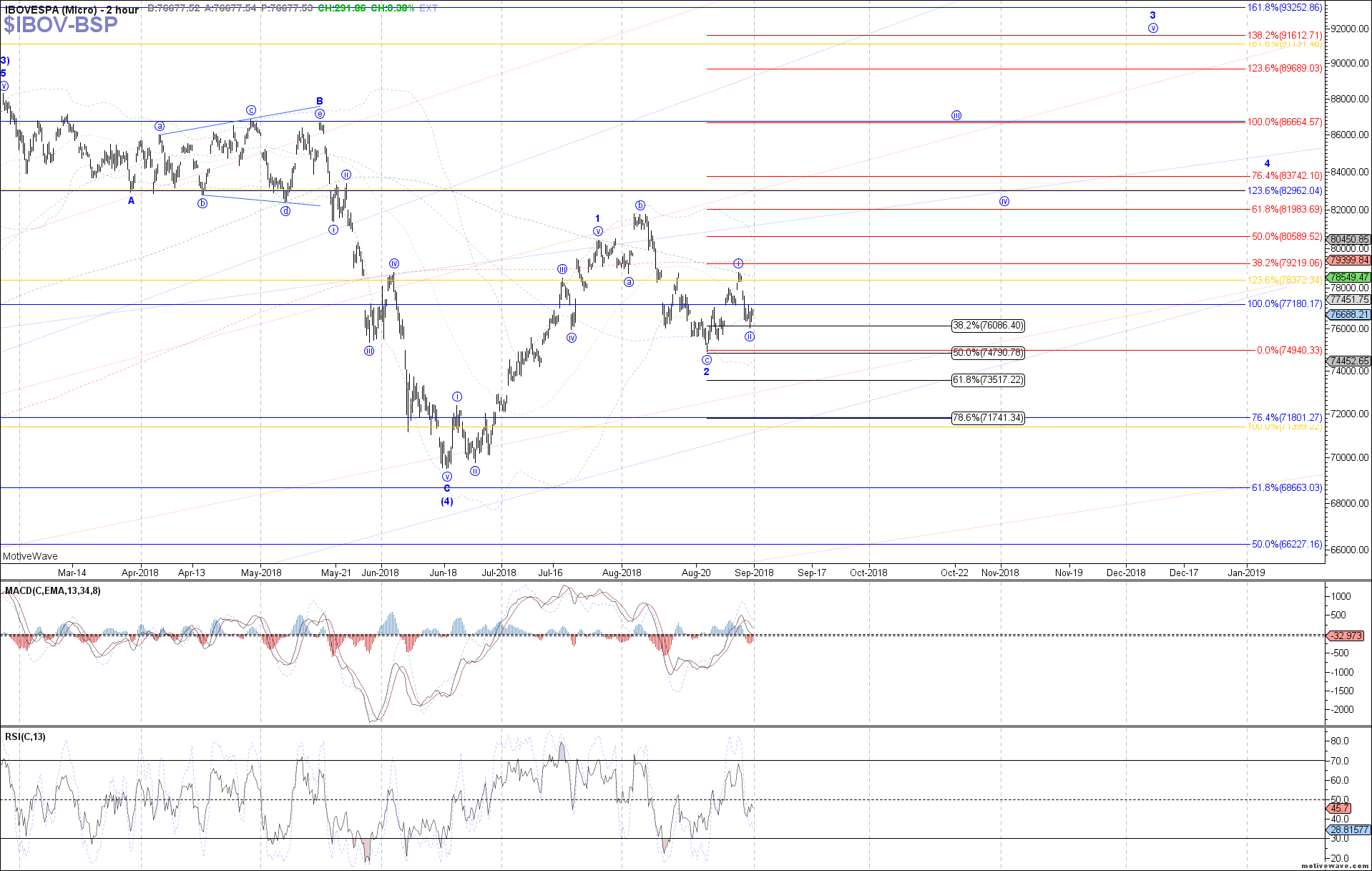 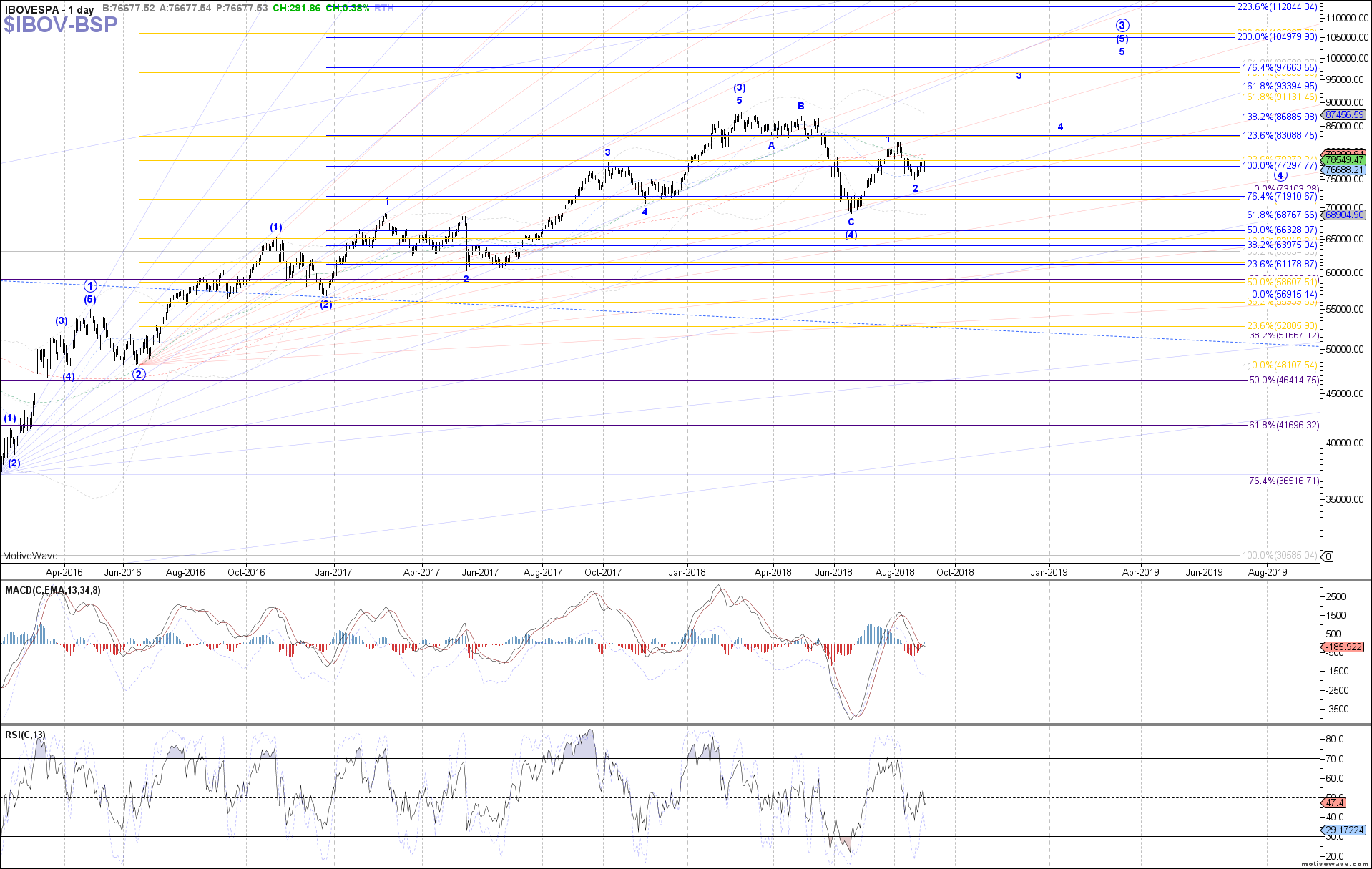 IPC: The IPC Index of the Mexican Bolsa (BMV) started off initially higher last week also, making a small extension in wave i of C before pulling back in what should be wave ii of C. If so, then the .500 retrace of wave i has already been reached, enough to satisfy a bottom for wave ii of C. However, with no indication of a local bottom in place yet, price may still want to test the .618 retrace at 48900 before turning back up in wave iii of C. Otherwise, a break above 50260 is our indication of a bottom in place and the start to wave iii of C. 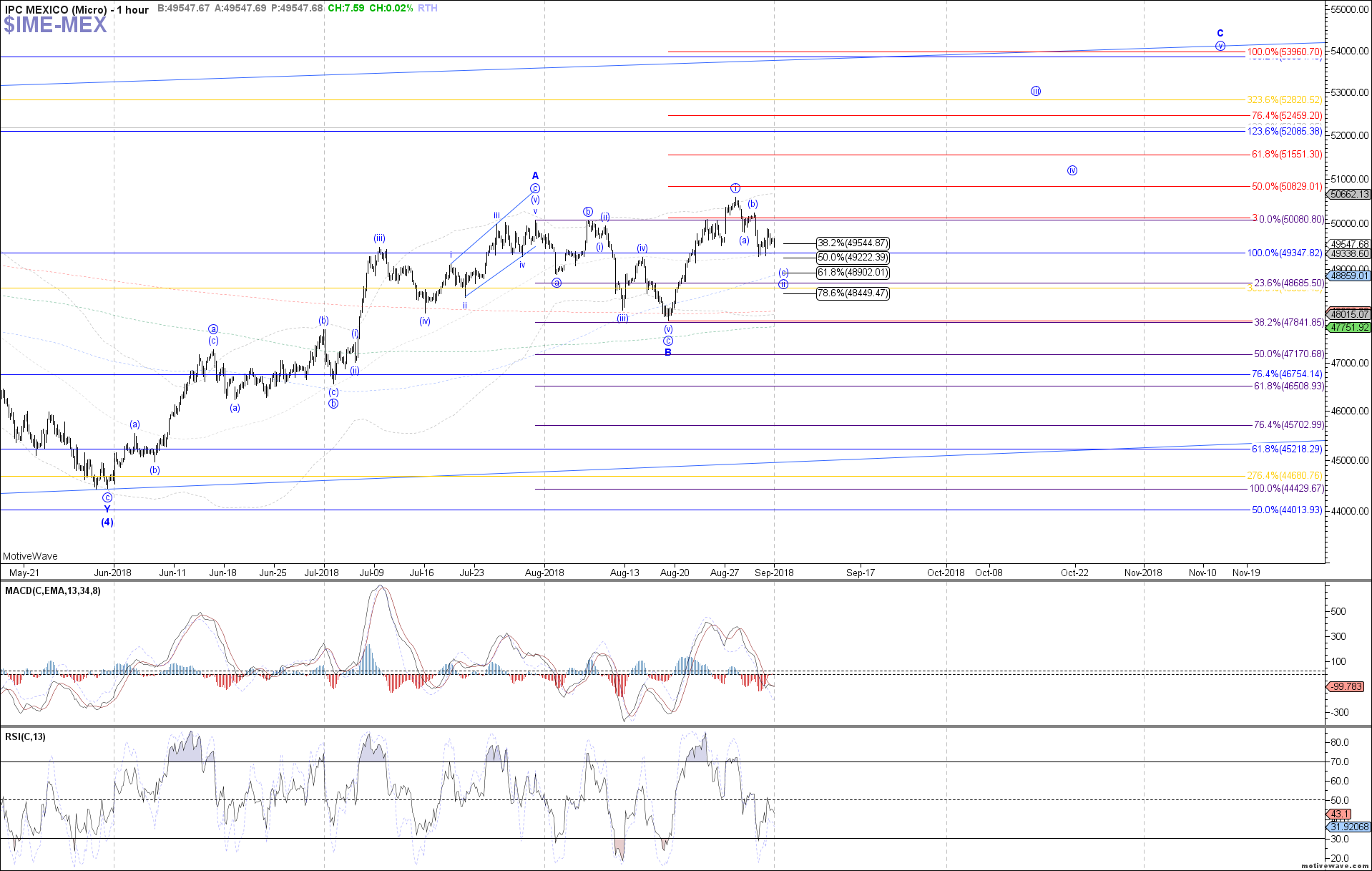 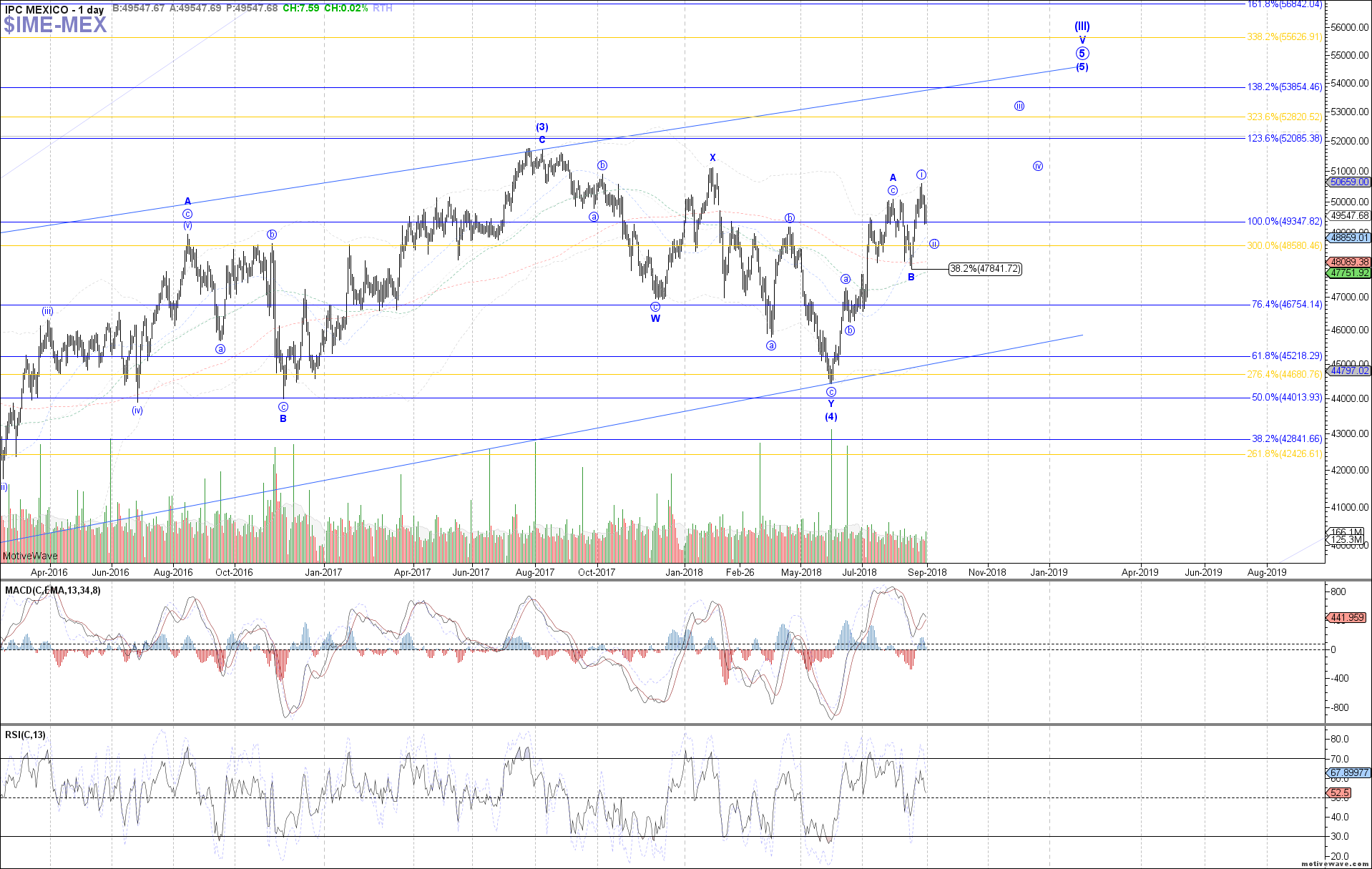