Consumer staple stocks have been performing exceptionally well lately, as the market is moving into more defensive sectors. However, this is starting to drive up the sector’s valuations to record levels, including higher than in 2007.

My favorite long-term pick in the sector continues to be Unilever, because it has 60% emerging markets exposure and as a European company it doesn’t have the “S&P 500 index premium” that most U.S. stocks have these days compared to foreign counterparts.

An argument that is frequently made is that stocks should be highly valued like they are, because interest rates are so low. In other words, the equity risk premium is still reasonably high, despite high earnings multiples, sales multiples, and book multiples. And this does have an element of truth to it; U.S. equity valuations historically and logically have a significant inverse correlation with interest rates.

If that was all that mattered, though, European stocks should be even more expensive, considering their regional interest rates are zero or negative. And yet, European stocks are way cheaper, including Unilever compared to its American equivalents.

I’ve been watching Church & Dwight (CHD) for a while now, because it’s one of my favorite consumer staples stocks. I even owned it many moons ago.

And it has absolutely crushed the S&P 500 over the long term:

The problem is that its valuation is becoming too high now. That’s not to say it’s in bubble territory or can’t go higher for a while, but it is on the high side of what is reasonable at this point.

Compared to the current stock price of around $80, Morningstar has a fair value estimate of $47 and a “no moat” rating, which I think is silly. The company’s ROIC is consistently high, its sales and earnings are unfazed by even severe recessions, and its brands are the strongest in their categories. I’d call that at least a narrow moat. Considering that Morningstar assigns Proctor and Gamble a “wide” moat, even though its margins and ROIC are about the same suggesting similar competitive advantages, I think that’s inconsistent.

The old Graham formula suggests the current price of $80 for Church & Dwight is about fair in the current interest rate environment, although the dividend-adjusted PEG ratio is a lot higher than I like (I prefer under 2):

The company has grown revenue by a little over 5% per year over the past five-year and ten-year periods. Earnings growth used to be in the double digits but now tends to be in the high single digits because operating margins were 16% a decade ago, moved up to 20%, and then flatlined at around 20% for a while now. Competition is fierce enough across the board to prevent going much higher than that. The company earns less than 20% of its sales from international regions, but its international sales are growing more quickly than the company baseline.

CHD’s valuation is currently 20-25% above its 5-year average, depending on which metric you base it on (earnings, sales, book, cash flow, EBITDA, dividend, etc.)

The balance sheet is moderately strong, with a BBB+ credit rating and a debt/income ratio of approximately 4x, which is fine for a non-cyclical steady business. The current P/E ratio is about 33, the dividend yield is just over 1.1%, and the company buys back about 2% of its shares or more in a given year.

With that in mind, we can walk through a couple forward return scenarios.

A rosy-but-reasonable scenario is that the valuation remains static at this high level, the company grows revenue at 5%, buys back 2-3% shares per year for 7-8% earnings, and pays a 1% yield, resulting in 8-9% forward long-term returns.

A bearish-but-mild scenario is that the company only grows revenue at 4% going forward due to increasing competition, buys back 2% of its shares per year, pays its 1% dividend, and its valuation reverts to the mean over a 5-year period, resulting in a -5% valuation drag per year on average, resulting in total returns of about 2% per year over the long-term.

Overall, the sector is looking rather stretched, and Church & Dwight is not much of an exception. Consumer staples are indeed defensive, but they can still have sizable drawdowns during recessions:

I’ll be keeping Church & Dwight on my watch list, but am not putting new money into the sector at the current time. 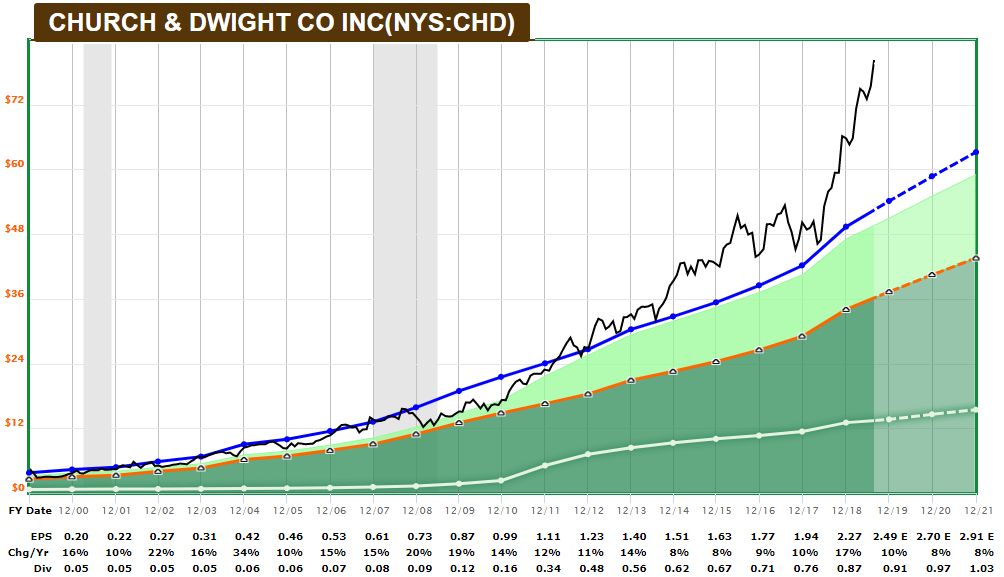 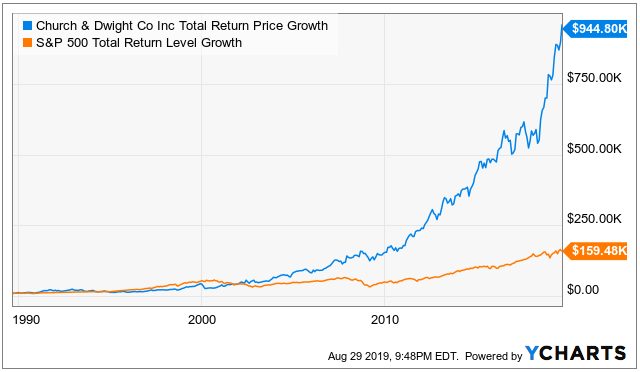 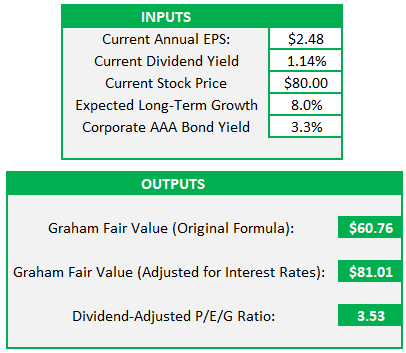 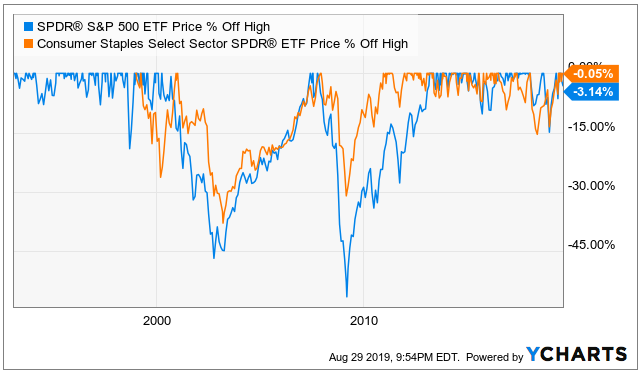