BTCUSD: What's going on at the larger degree? Has anything changed?

The primary black count that I've been tracking is still quite reasonable as a primary perspective. Note, this scenario for price to drop below $50k was identified as a potential several weeks ago, initially as the alt blue count. Admittedly price has dipped much deeper than anticipated on this (b) wave (as per the black count pullback)

In order for this to be a valid (b) of circle iii. Price must remain above the wave circle iii low as per this interpretation. While the exact level varies from one trading venue to another, it's generally $39.6k. Below that level the black count is completely invalid.

Should price break the September low we can take the black count off the chart and the red count becomes primary, ie that price is aiming for a lower low in the $35k-$39k region* (more on this potential later).

If price follows through bullishly from here, while the black count is still intact, I would be remiss to ignore the potential of a bigger i-ii (shown in green). Effectively red and green are the same counts here at the larger degree with the distinction being that the green is based on the low of ii being in at the Friday night low and the red indicates a lower low coming. To clarify, a lower low below $39.6k will make red strongly the primary count, whereas if we don't get new lows or get a slightly lower low that holds above $39.6k we will need to discern between the bottom developing as (b) of iii as per the black count or wave circle ii as per the green count.

If price follows through upward in bullish fashion leaving the Friday low in hindsight, we'll get some potential indication for black vs. green from the shape of the rally. Remember in the black count the next rally is a (c) wave up which is a 5 wave move, whereas the green count, assumed to be a larger ending diagonal, will be in wave iii which is expected to be a iii wave move based on green being an ending diagonal. Thus, an impulsive rally from here, while not nixing the green, favors the black count.

The black count has very nice confluence with the standard 5th waves but should we see a low below $39.6k or a larger wave iii develop here, that opens the door to this very extended 5th wave targeting the "extended" 5th wave region on the chart.

*Should the Friday lows break, which increases in likelihood should BTC break below $46.2k, a standard decline would suggest the next low would be just a wave iii down at which point one more iv-v is expected to complete the red count in the $35k-$36k region. That said, BTC has a bad habit of skipping the final iv-v in significant corrections and so it's important to be on the lookout for this prospect in advance. A lower low is not guaranteed to complete but the iv - v down is "skipped" frequently enough to be mentally prepared for that prospect. This potential is shown on the micro chart in purple

Conclusion: The concepts to take away from this post are that if the Friday low holds the black count is intact and that the depth of the retrace has not broken the overall bullish outlook. Instead it's opened the door to a more extended 5th wave. Should price make lower lows, the larger i-ii of an extended 5th wave becomes the primary count contingent on price making no sustained break below $35k.

Lastly, In order to move into a more bearish count, I need to see a sustained break below $35k, ie the approximate .764 retrace off the Summer lows. Should that break resoundingly price is likely to retest and break the July low. All that said, such a move would constitute a large of 4 down, indicating that the summer lows was just an a of 4. So long as $24k relatively holds our strong expectation is still for a larger wave 5 to develop to take price in excess of $100k. This means that even if price strongly breaks down here, the larger degree outlook is bullish and we have nothing suggesting a lasting top is in place. All of this aside about a lower low down to $24k: There's nothing in the current decline off the November highs that indicates this is at all likely currently. From here we would need some massive extensions down even to break $35k. As such this potential, while possible, is not something I consider reasonably probable. 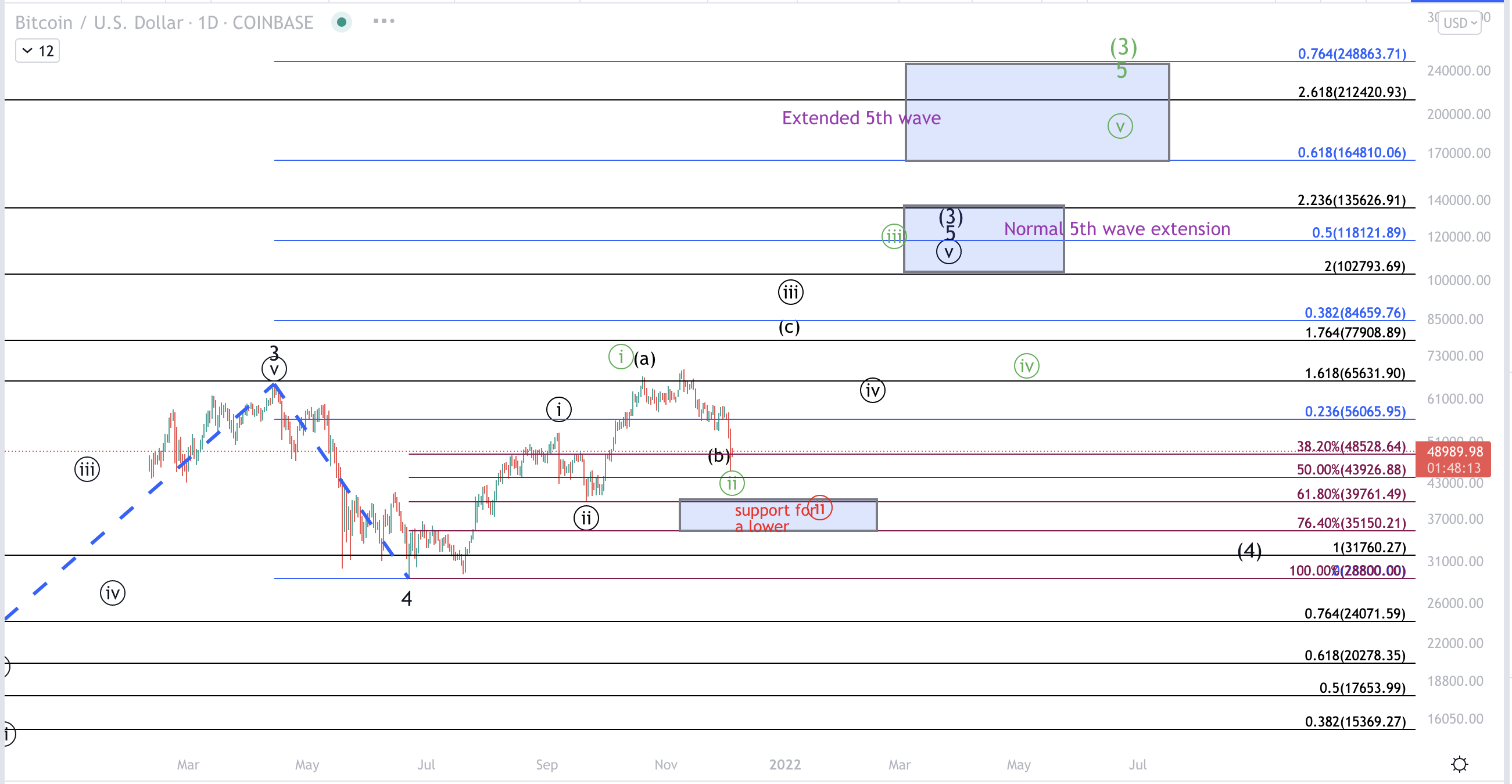 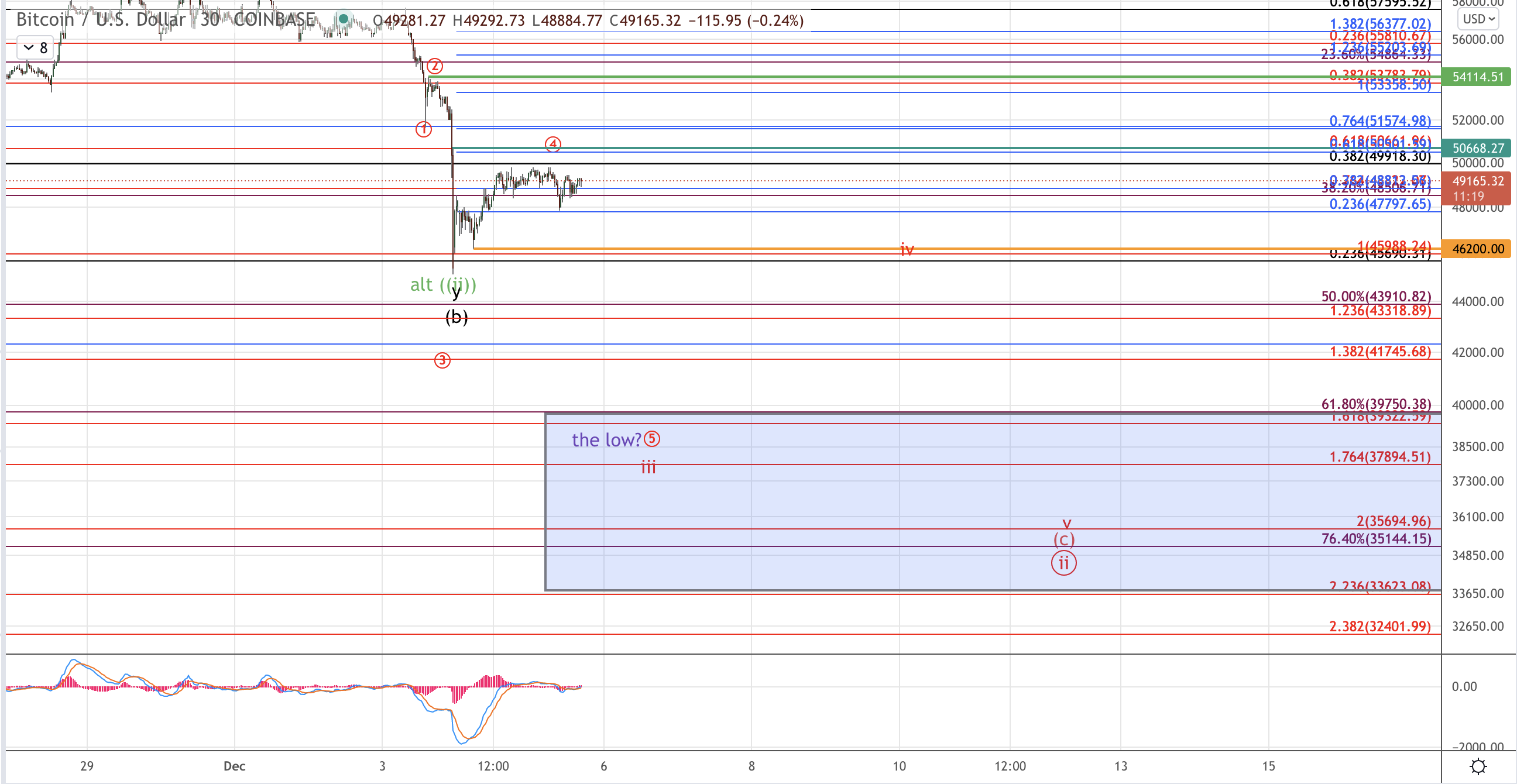 BTC micro
Jason Appel is a financial markets veteran who hosts our Beginners Circle section for new members and provides coverage of U.S. stocks and cryptocurrencies.