N225: The Nikkei tumbled further last week, unfortunately slicing through the target support for wave (iv) of the ending diagonal c-wave off the July low. Since price is still above the wave (ii) low, technically the ED has not completely invalidated yet, but odds of it playing out now seem very low. Therefore, the alternative options appear to be a significant top already in place as blue wave (5), or a very expanded b-wave in a running flat off the May high shown in red. In either case, there is nothing to suggest a local bottom in place yet, and it seems that a retest of the August and July lows is likely to be seen next before attempting any sustained upside. A move above 22750 would be needed to consider otherwise. 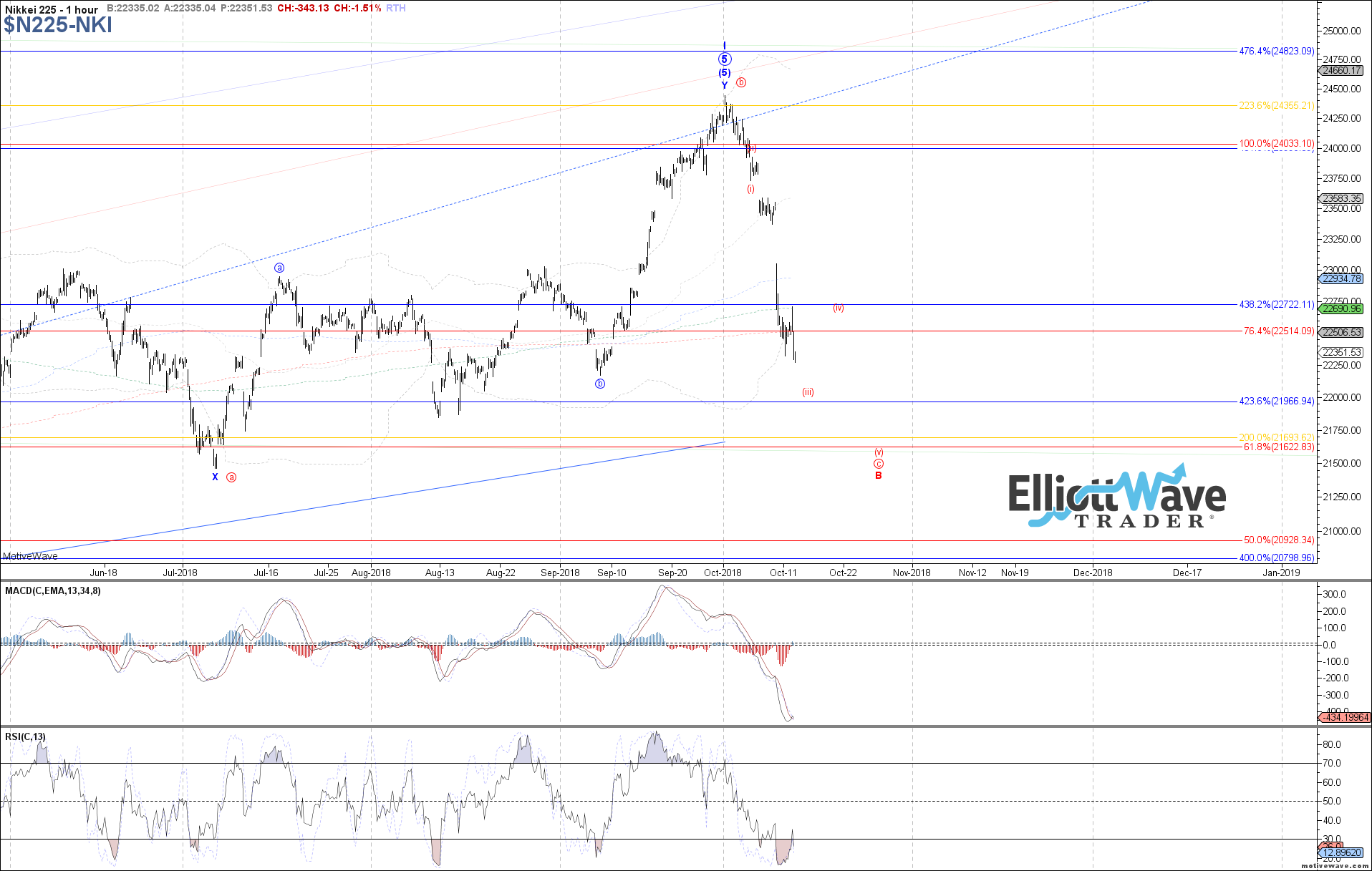 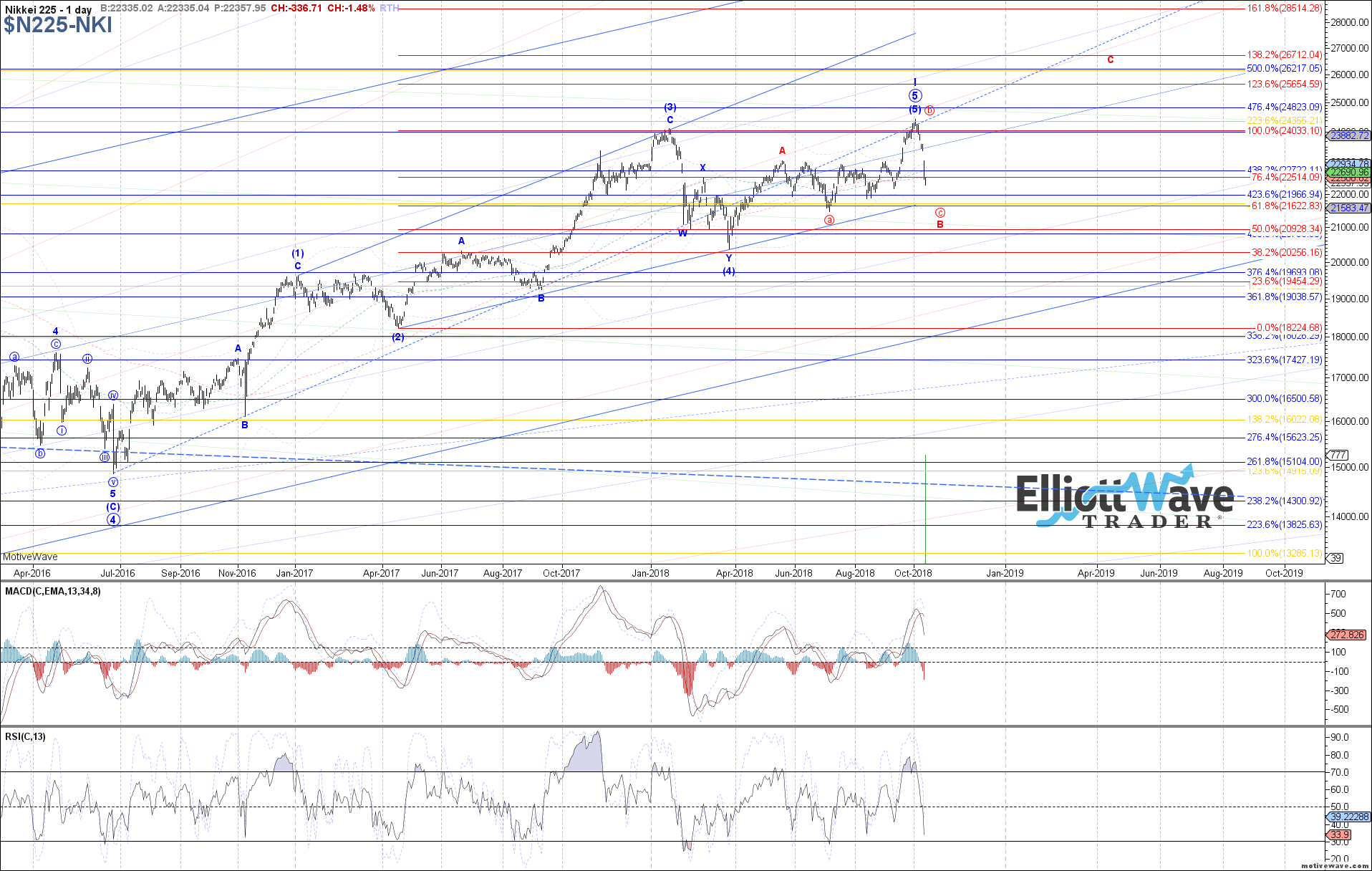 HSI: The Hang Seng continued its decent last week as well, breaking below the September low as suspected, and extending down to the next region of fib confluence. Price has since attempted to curl back up again, but not in a manner significant enough to assume a local bottom in place yet. That said, there isn’t anything strongly suggesting that price is going to begin accelerating lower again either. Therefore, if another low is going to be seen, it may only be a nominal new low with 24200 as the next support. 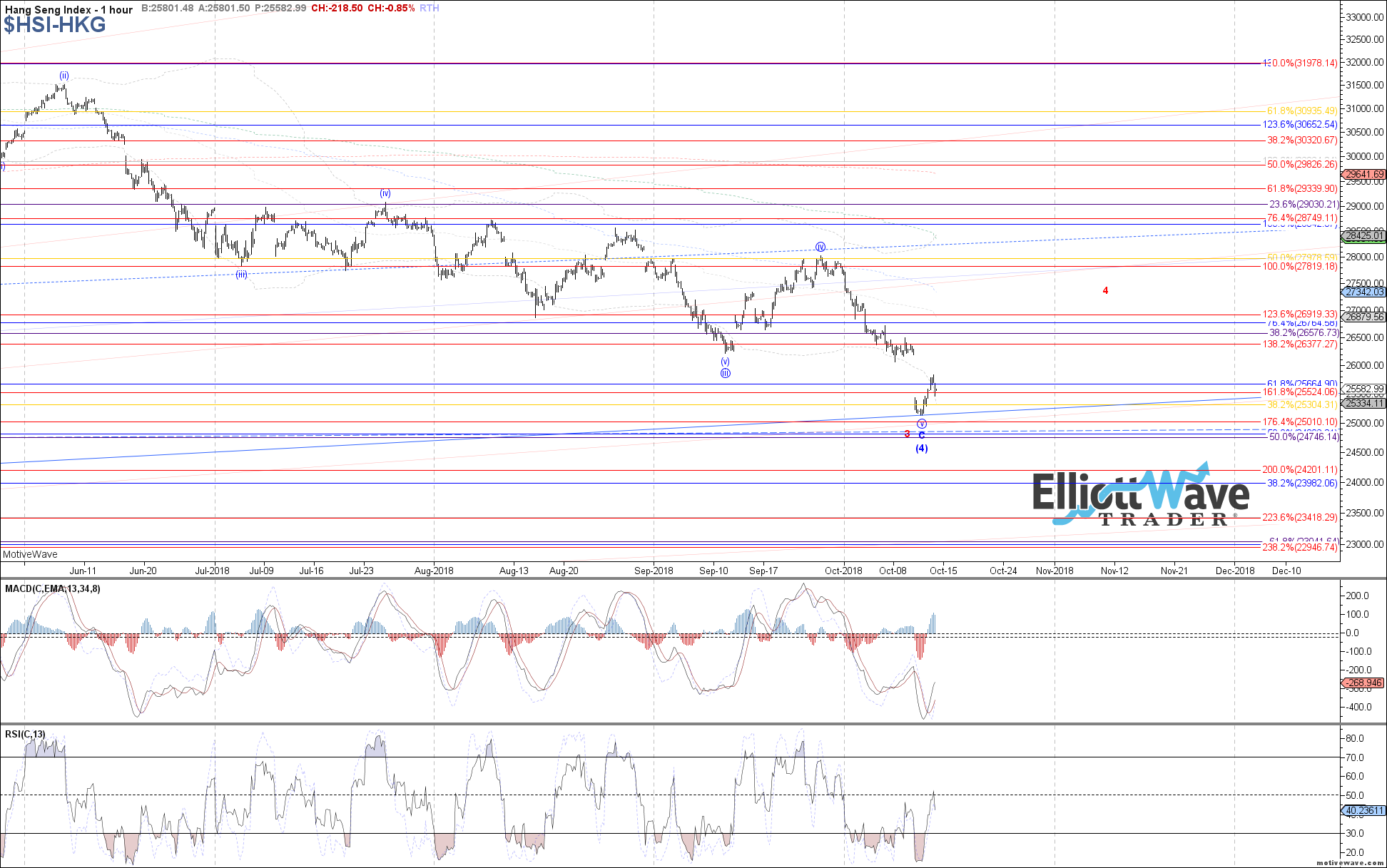 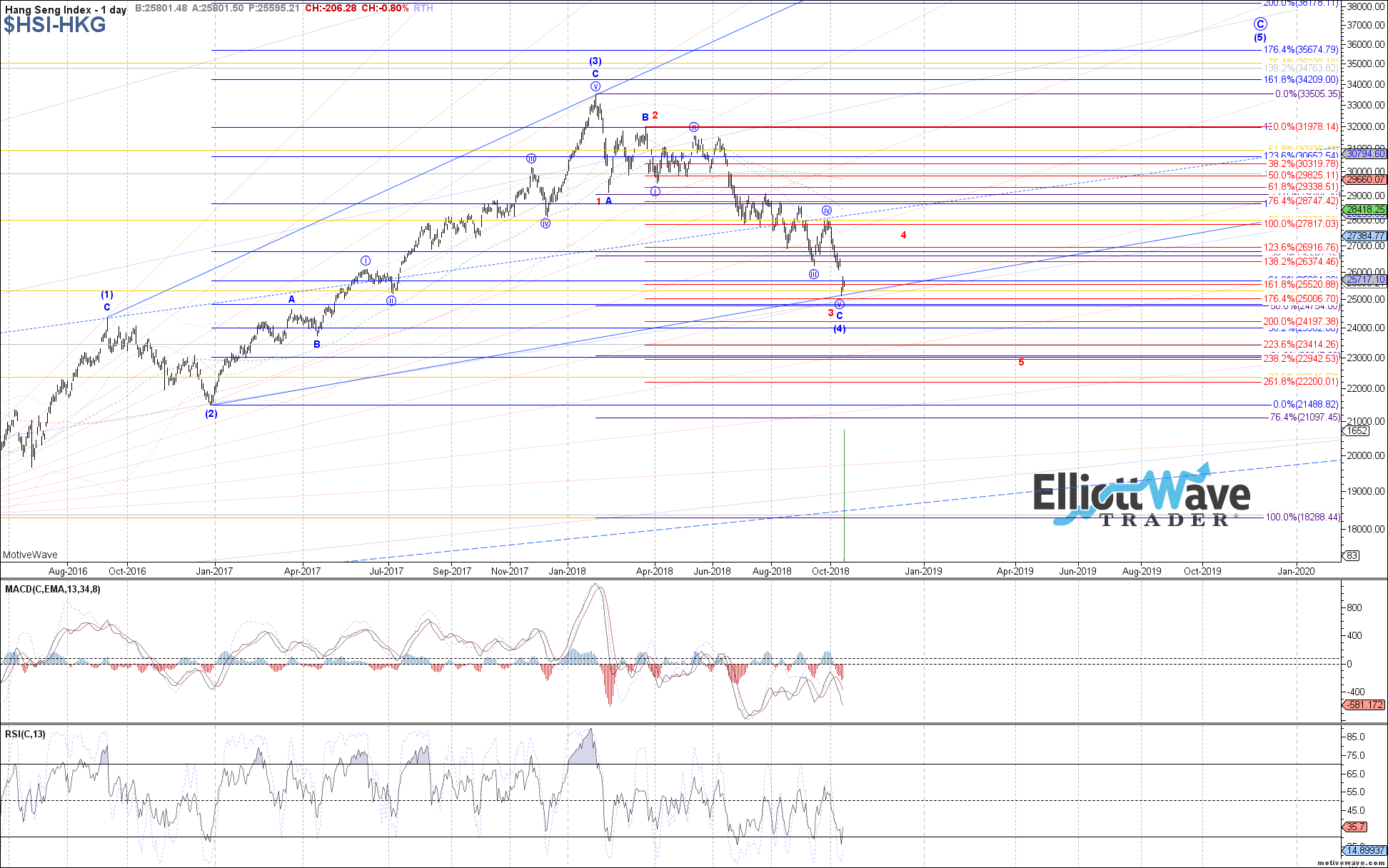 SSEC: The Shanghai Composite continued lower last week as well, breaking below the prior September low and confirming a top already in place for wave 4 of (3). Therefore, price should currently be filling out wave 5 of (3), with last week’s low likely only completing wave iii of 5. If so, then the current bounce would be wave iv of 5, with 2630 as ideal resistance to hold in order to turn price back down toward 2490 next as wave v of 5. 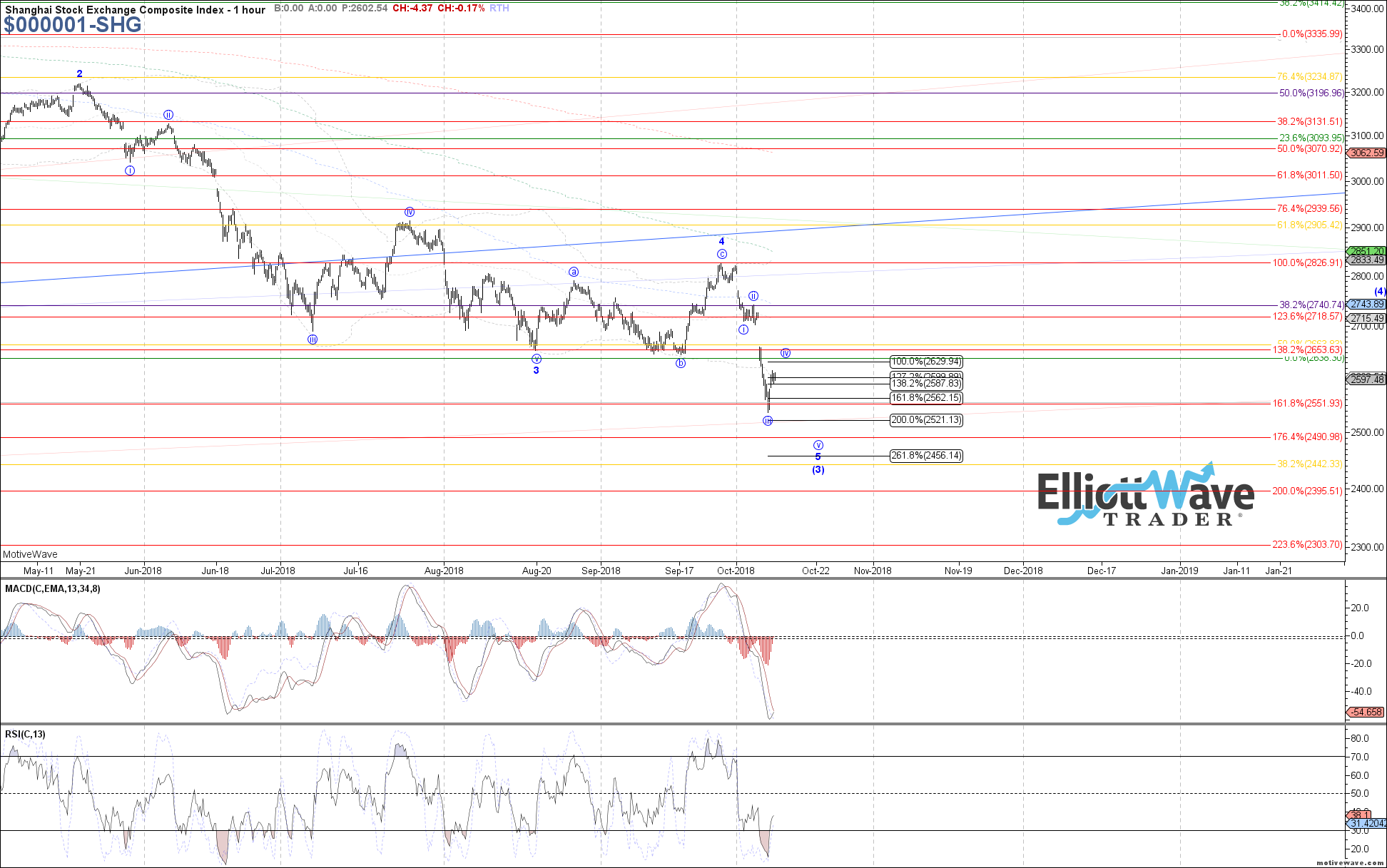 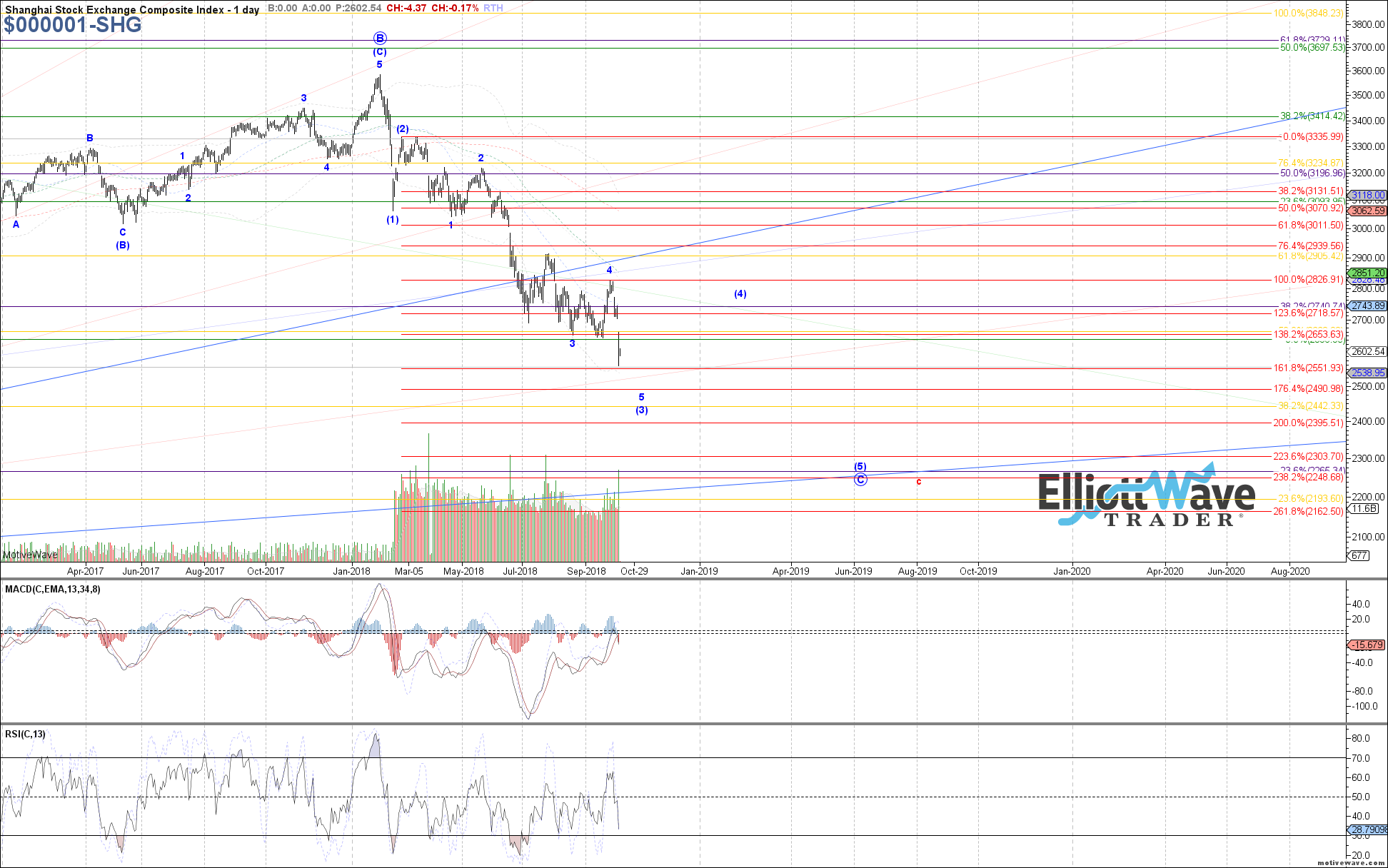 NIFTY: After the breakdown at the beginning of the month, the Nifty continued to chop lower last week, still not showing anything reliable to suggest that a lasting bottom has been struck yet. Instead, if price is filling out 5 waves down off the August high as blue wave c of 4, the current bounce should be a 4th wave, either wave iv of (iii) or the higher degree (iv) already. In either case, unless 10630 is cleared at least one more low as a 5th can still be expected before attempting a bottom. 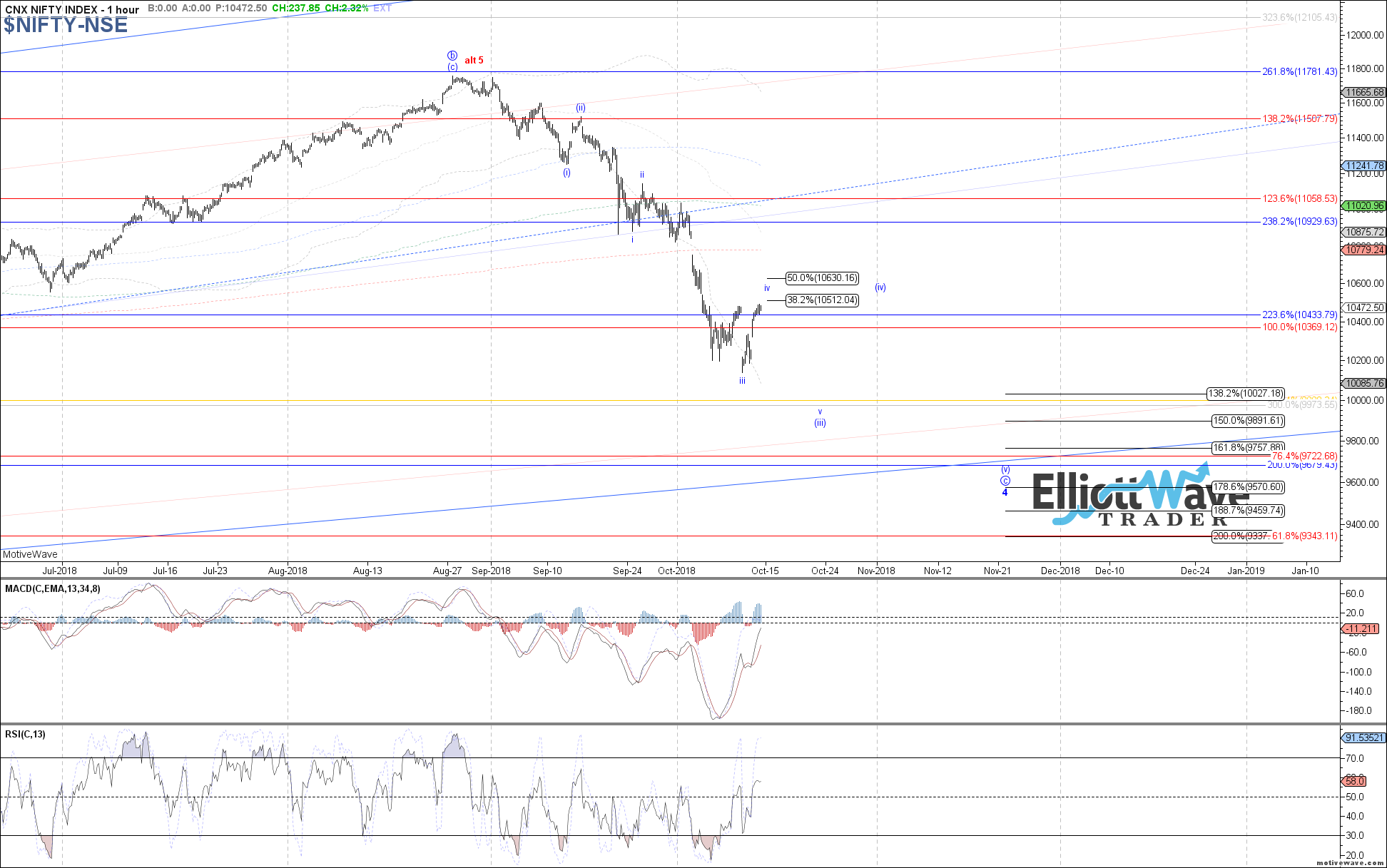 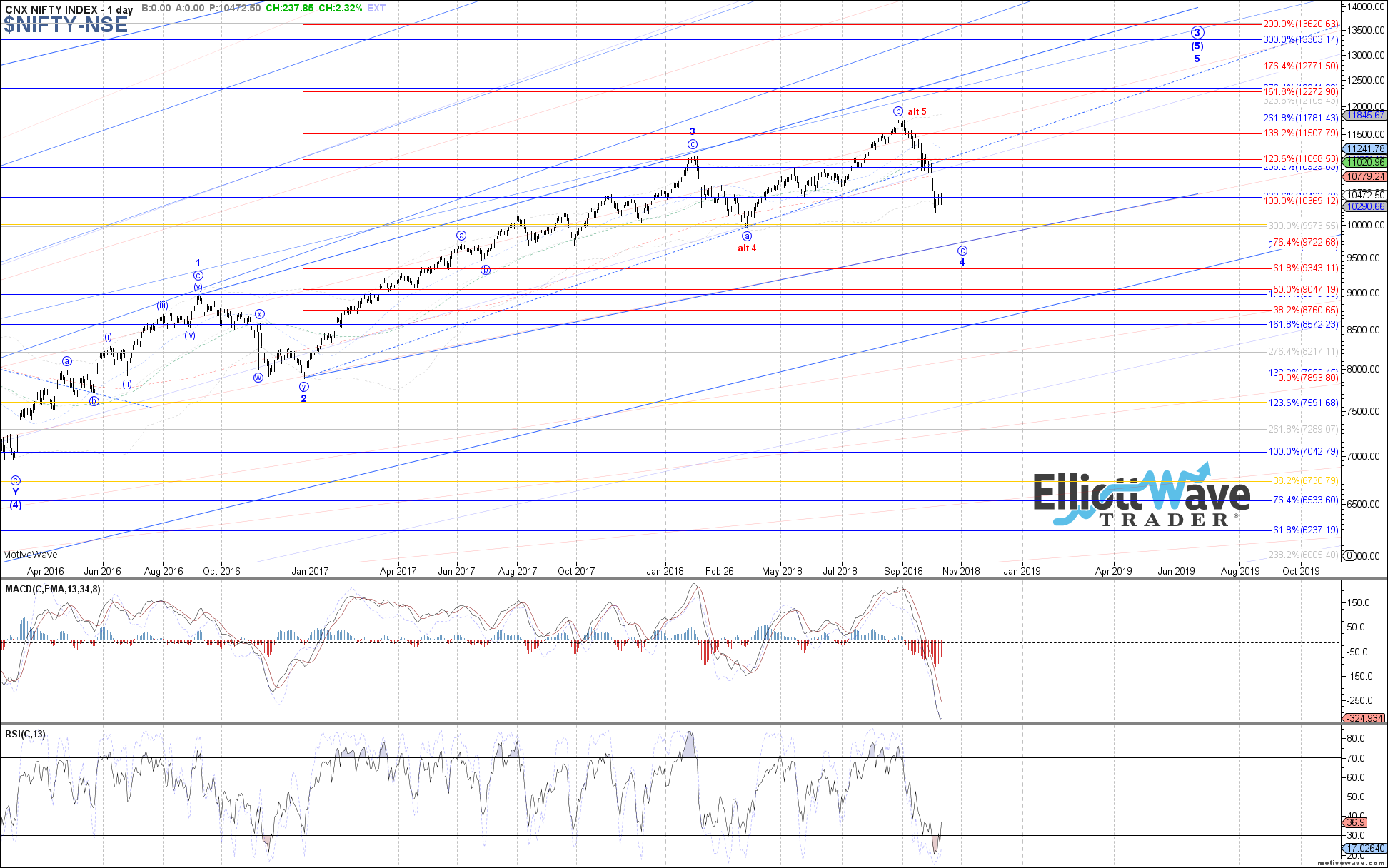 XJO: While further downside was expected for the ASX last week, the extent of that weakness was more than anticipated, with price slicing through major support. This leaves us with either a top already in place as wave (5) at the August high, or an alt wave (3) shown in red. In either case, there is nothing yet to suggest that a lasting bottom has been struck to this decline, with the next bounce likely only being wave iv of C. If it materializes from here, 5945 is main resistance above that should hold to turn price back down for another low as wave v of C. 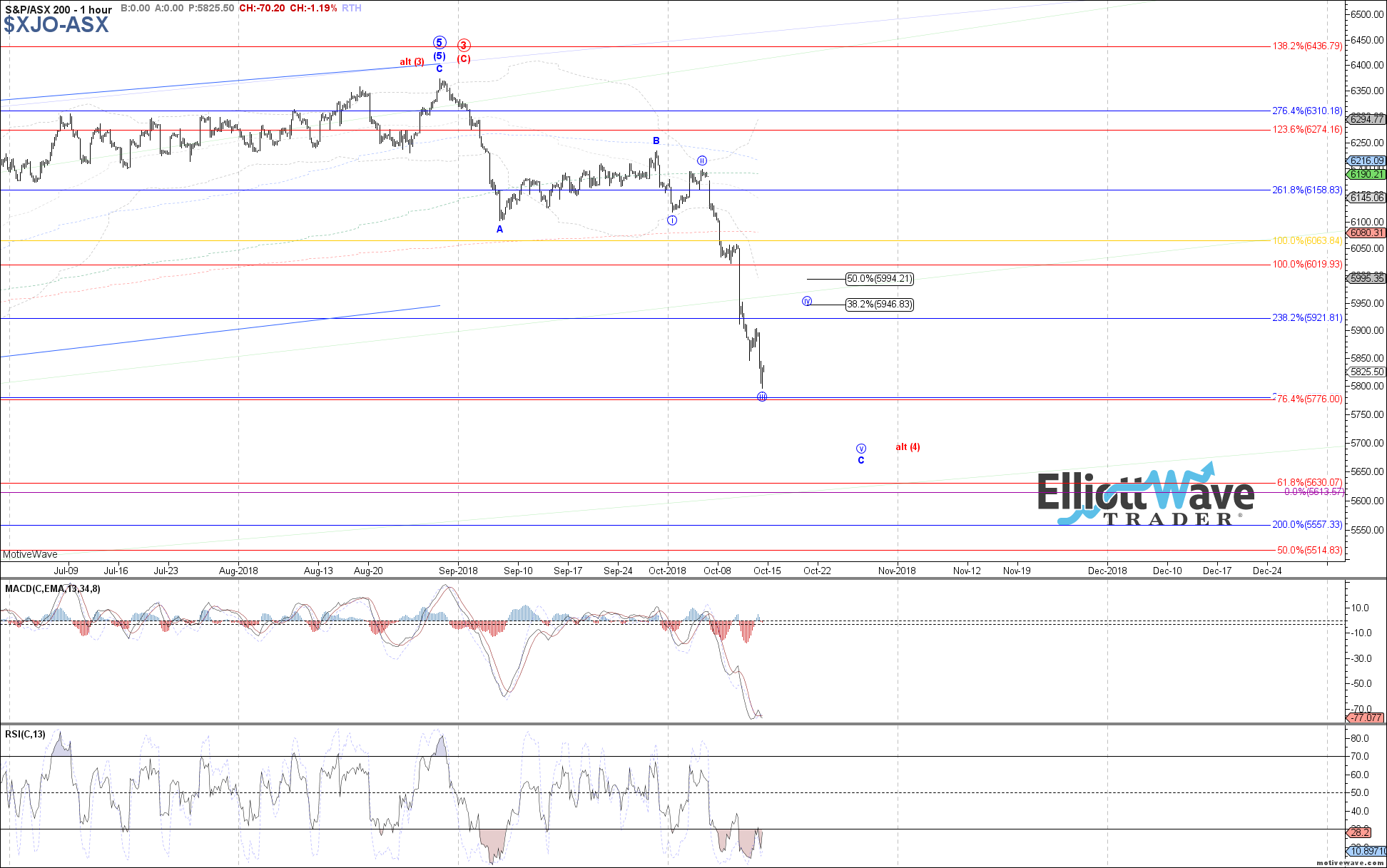 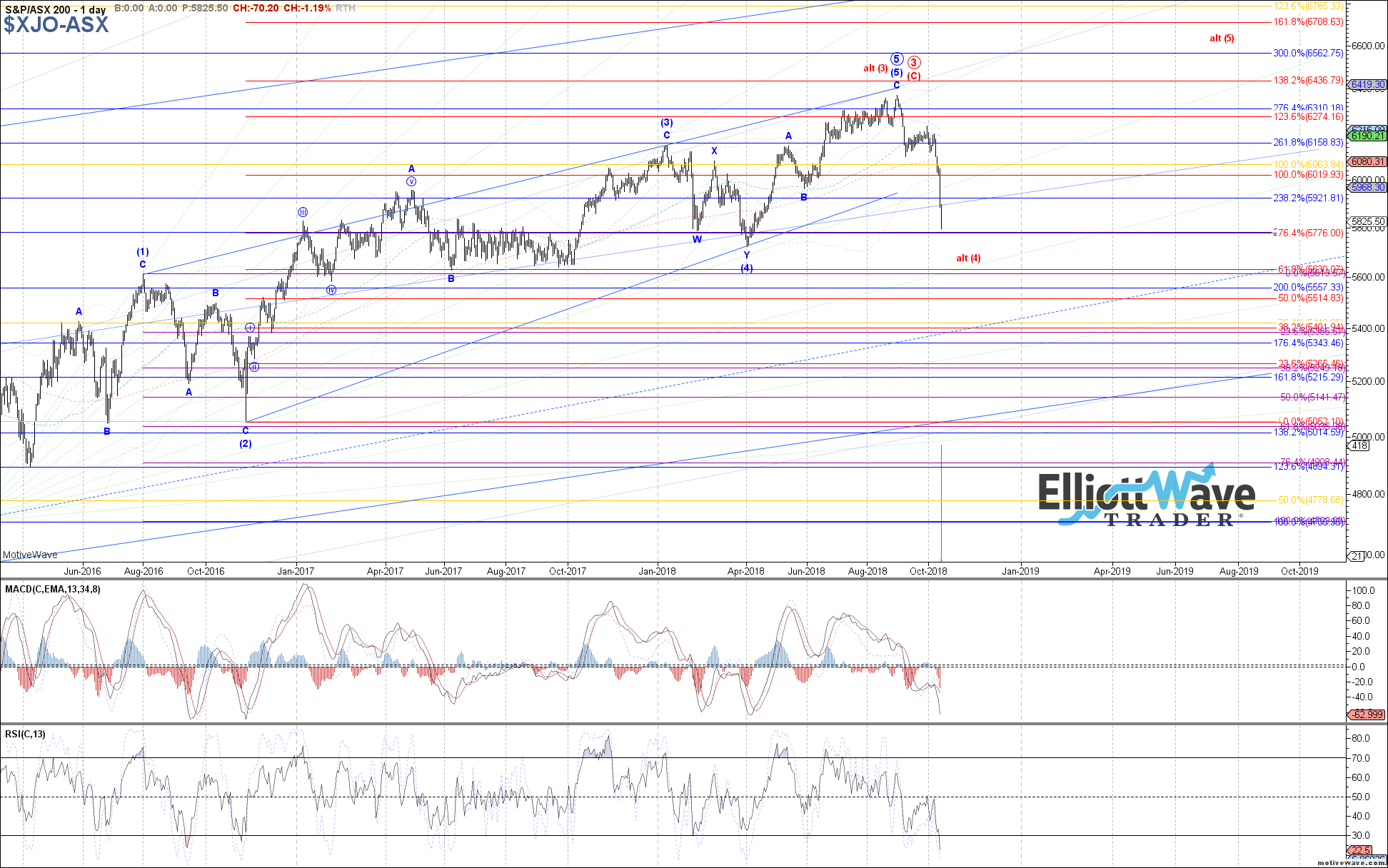